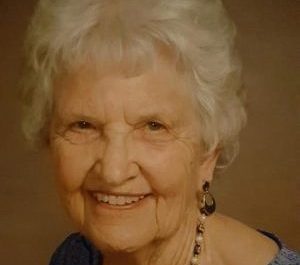 Adeline F. Reeves passed away on September 7th, 2019, at the age of 92, in her home with her son, Jeff, with her. Addy (as she preferred to be called) was born in Oakdale, NE, on Jan 20, 1927 to Herman and Lena Walters and was raised on their family farm with her four siblings: Wayne (deceased), Millie, JoAnn (deceased), and Marian. She graduated from Oakdale High School, hopped the train to Omaha with her older sister, Millie, got a room at a boarding house, landed a job as a secretary and soon met Frank, her husband of 62 years. They were married on January 13, 1947 in Manhattan, KS –– Dad said for two cents he would marry her and Mom pulled out two cents –– and that was that!

Addy spent twenty-two years as a Navy wife until Dad retired in1965, and they moved to Los Alamos, NM for his second career with the Los Alamos National Laboratory. Summers and family vacations were spent traveling the U.S., Mexico and Canada in a succession of tents, trailers and motorhomes until Dad’s illness in 2007. All the military moves and family vacations instilled in her family a vast love of the outdoors, a can-do attitude, independence, and a resilience that continues to guide their children.

After retiring from the Lab in 1981, Addy and Frank began their next big adventure –– purchasing 43 acres near Ava, MO, building a home, raising cattle (and a pig!), growing massive amounts of vegetables, and continuing to travel with many newfound friends in the RV clubs to which they belonged, as their kids left home. Mom and Dad were both very active members of St. Leo’s Catholic Church , and Mom continued to volunteer at the church and at the Heart of the Hills Thrift Store into her 90s. She leaves behind a legacy of love and service to both organizations.

Dad founded the LST49 Reunion group in1982 , bringing together a group of sailors who served together during World War II aboard the Naval ship of that name, and Mom continued to attend their annual reunions after dad’s death in 2008, and served as secretary until 2016, until remaining members were unable to attend. Dad was the sailor in the family, but Mom has always been our anchor.

After Dad died, Mom continued to live on their farm with her cats Sneaky Pete and Smokey –– continuing to garden, craft, and enjoy her birds, thanks entirely to the physical assistance and compassionate care by our brother, Jeff, for whom we are all incredibly grateful.

Our mom was blessed with a long and happy life. She leaves behind an incredible legacy in her kids, who will miss her brilliant smile, her sometimes surprising sense of humor, her love of all games, and her indomitable spirit. She taught us how to cook, sew, swim and play a multitude of games. She tolerated all of the critters we brought, bought and rescued; most of the time taking care of them long after we lost interest. She was a crafter extraordinaire: over the years she baked and decorated elaborate birthday and graduation cakes, created beautiful quilts, crocheted complex tablecloths, wove beautiful Ojo de Dios, created myriad crafts to sell, and sewed clothes for all of her children and their dolls (and her grandchildren’s dolls!). She was as ready for a game of badminton, horseshoes or softball as she was for pinochle, Yahoo, dominoes, Sorry, or a rousing game of poker (which she usually won). She was an amazing cook  – creating recipes to feed a family of ten – with leftovers! We all remember her delicious peanut butter cookies, popcorn balls and of course her spaghetti in the big yellow bowl. She pickled cucumbers, beans, and sour cherries (who knew those could be so good?), canned tomatoes (and everything else!) and baked mouthwatering bread and sweet rolls. One of her favorite meals was liver and onions; a dish the rest of us gladly skipped! Mom loved music and dancing of all sorts, from polka to waltzing to square dancing. She encouraged (and suffered through) clarinet, flute, trumpet, guitar, and piano lessons, and greatly enjoyed her kids, grandkids and great-grandkids singing and playing musical instruments to her, but frequently lamented that she couldn’t carry a tune herself! Our family is extremely grateful for the music therapy provided by Oxford Hospice in the last year of her life.

In her final years, her kids planned and brilliantly executed a 4 day, surprise 90th birthday party in Colorado which was attended by all her kids and their spouses, fourteen grandkids and their spouses, and three great-grandkids. Mom said it was one of her greatest memories. Her daughters treated her to a trip to NYC the following summer and it was a tremendous time for us all! In her final year, we were all grateful for frequent visits home to spend treasured moments with her. Our mom was deeply admired and truly loved by so many throughout her 92 years on this earth. We may only get a few moments of true grace in our life…our mom was a moment of grace.

In lieu of flowers, a donation to the Audubon Society of Missouri, St. Leo’s Catholic Church , or the Heart of the Hills Thrift Store may be made in Mom’s name.

Mom’s service will be held October 12, at 11 a.m., at St. Leo’s Catholic Church in Ava, and we will Celebrate her life and Mourn her passing at Clinkingbeard funeral home Friday, October 11 from 6-8 pm.