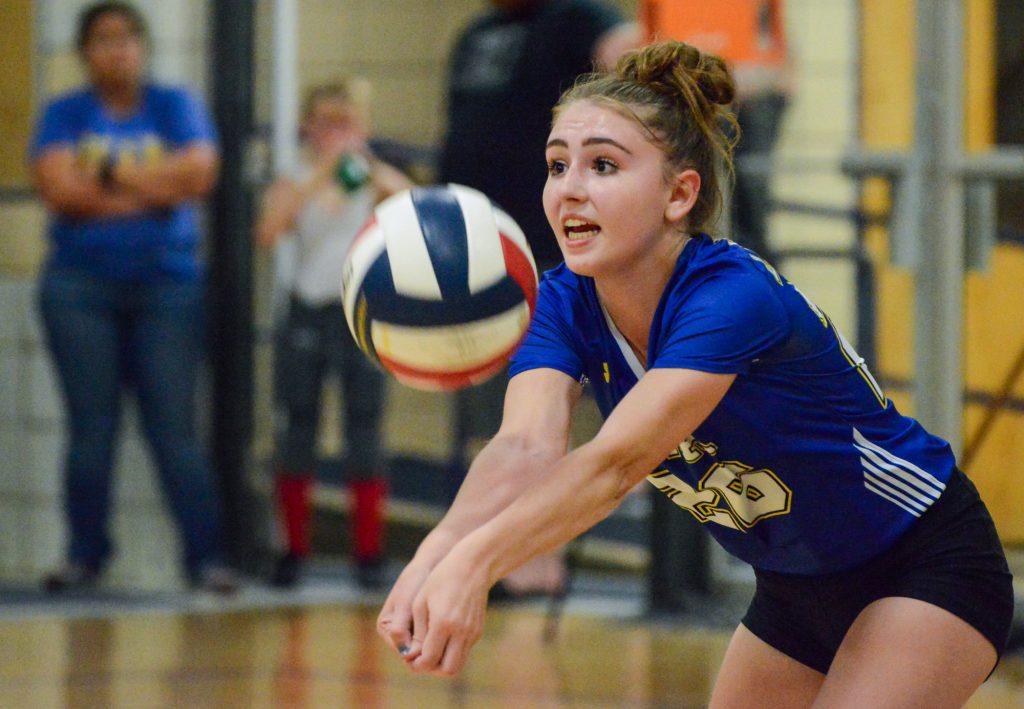 Sarah Dobbs was busy making assists Tuesday evening as she worked the court to set up attacks for teammates like Olivia Heriford, Lauren Hall and Haley Herrera. Dobbs was in on digs, saves, and also worked her role as a setter.

“I never go into a game expecting to lose,” said coach Emily Petty. “I knew it was going to be a battle. I knew this team, that what they were putting on the floor tonight was much quicker. We want to play that fast style, but we get into a groove of playing to our opponents. To our benefit they were a faster paced team tonight. I expected to win. I don’t step out here wanting or expecting to lose.”

The match started with Ava’s Sydney Snelson sending it a little too far and out past the baseline, providing Hollister with the first point of the set. The Lady Tigers were unable to hold on to the rally after a kill from Heriford put the ball back on Ava’s side of the court.

The Lady Bears managed to pull away with a seven-point lead after keeping Hollister on their heels with a three-point rally to get close to a win with a score of 18-11.

Communication issues led to a loss of the rally and Hollister caught up a little before coach Emily Petty took the team’s first timeout with Ava in a short lead, 20-16.

Neither team maintained any long rallies late in the first set, service changing frequently as the Lady Tigers slowly crept back up to within a point of Ava. The score set at 24-23 for the Lady Bears, Hollister served the ball. The return from Ava ended up with Hollister committing an attack error, giving Ava the final point in the first set.

Hollister also took the first point in the second set. Ava kept pace, remaining within one point of the Lady Tigers until Hollister pulled ahead, 12-5.

Another kill by Heriford resulted in a sideout, and a four-point rally for the Lady Bears to close the gap, 13-9. On Hollister’s next serve the Lady Bears benefited from a ball which landed outside the boundary.

A serve from Taylor Ernst developed into a back-and-forth before the ball found itself just inside the Hollister boundary. The next serve would end up in the net, passing the ball back over to the Lady Tigers.

Neither team went on a long rally through the end of the second set, however, quick spurts of two or three points chipped away at the gains made by the Lady Bears.

“We start to lose communication and confidence with ourselves,” said Petty.  “(It was) something with those two rotations, where they took off and we’ve been really focusing on those two. We did finally try to pick it up and we got back within four and battled back but it was too late.”

The score 24-20, the Lady Bears attempted a kill but were met with a solid block from the Hollister defense for their game point, defeating Ava 25-20.

Going into the third set Hollister again struck first with a tip missed by the Lady Bears. Luckily an offensive pile-up of players resulted in the side out, putting Ava in control of the ball.

Both teams were neck-to-neck on the scoreboard early with neither team being able to hold on to a rally. The knot was severed with a tip over the net from Hollister’s Jackie Pyatt, allowing the Lady Tigers to move ahead, 5-4.

But that momentum was cut short with another kill, this time from Herrera, which brought ball service back to the Bears.

Then that rally was severed after the Lady Bears dropped one in their court. Then again, the next serve from Hollister’s Emily Young went past the Ava baseline.

The back-and-forth ensued until Ava pulled ahead after a quick two-points from a kill by Heriford and a well-timed tip of the ball by Lauren Hall. During the third serve by Makynna Wallace, the battle ended when an Ava dig wound up in the net with no player able to recover it.

Moving into the middle of the set officials had blown a call, neither really sure of what transpired but called the point and sideout for Hollister.

Flustered with the call, the Lady Bears let Hollister close a 12-10 lead after the blind call was made. Now tied at 12, Petty called a timeout to bring the girls back into the game.

Again, the officials missed a call leading to a sideout favoring Hollister. Fate seemed to level the court in Ava’s favor when the Lady Tigers’ next serve went into the net.

Tied at 14, the Lady Bears took off on a four-point rally to break the persistent tie. A tip from Claire Fossett and a few dropped opportunities on the Tiger’s side of the court boosted the Lady Bears when they needed it.

Then communication errors got in the way as the Hollister front line won two points by tipping the ball right where Ava had a gap in the defense. Petty called a second time out, this time the set tied at 20. A kill from Heriford pulled Ava ahead, 22-20, but another sneaky tip from the Hollister side of the net kept the Lady Tigers in play.

Heriford was up to serve with the Lady Bears leading 23-21. Hollister sent the return right into the net on the third hit, awarding Ava another point. And again, Hollister caught up gaining the sideout.

Nerves racked both sides of the net, Fossett missing an attack providing Hollister with another point. The next serve traded sides before the Ava defense made the game-winning call.

The ball traveled over the boundary line giving Ava an electric, 25-23 win to take the match.

This win puts the Lady Bears at 3-1 for the season, the only loss being to Springfield Catholic on September 3rd. That being said, coach Petty still believes there is much to improve on.

“We missed way too many serves tonight and we are a very high-percentage serving team,” said Petty. “We don’t miss very many and we missed more tonight than we have all season, in the first three games. (We’re going to refocus) on the small little details and get (the team) that confidence level of this is our court, this is our game no matter where we’re at. We’re going to show up and play. Our schedule is getting ready to be a lot tougher. We can’t afford to play this scared volleyball. We’ve got to attack anytime we can attack.”

After visiting Plato on the 12th, the Lady Bears travel down Highway 76 to play in the Forsyth Volleyball tournament on the 14th, then host New Covenant at home at 6 P.M. on the 17th. 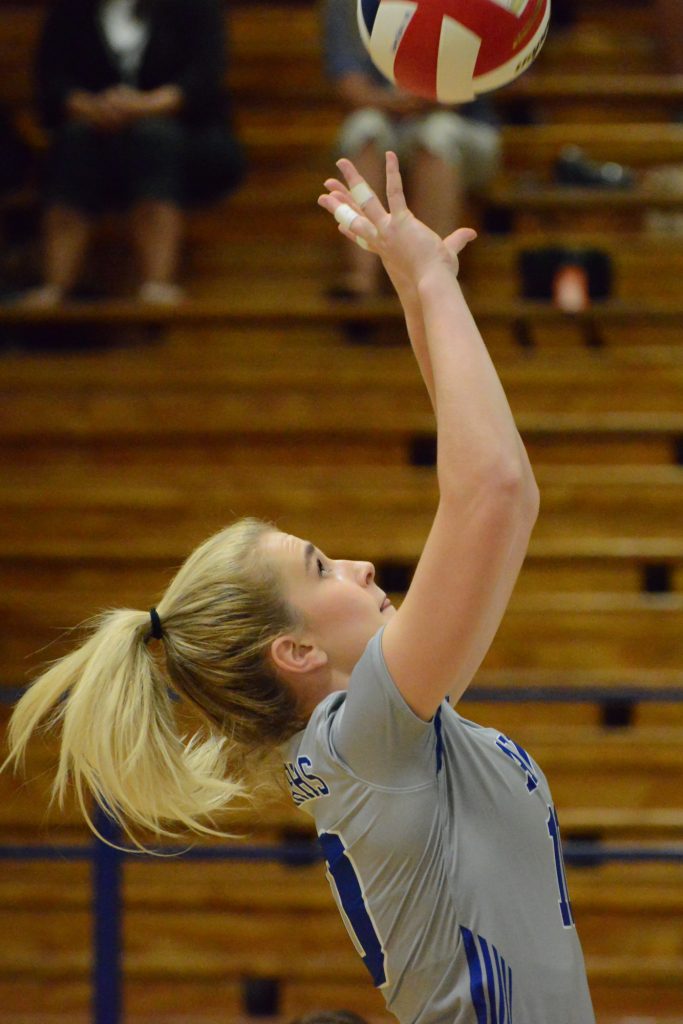 Senior Claire Fossett (10) leaps up and tips the ball over the net during a match against Hollister High School on Tuesday, September 10, in Ava. (Jason Hoekema/Douglas County Herald) 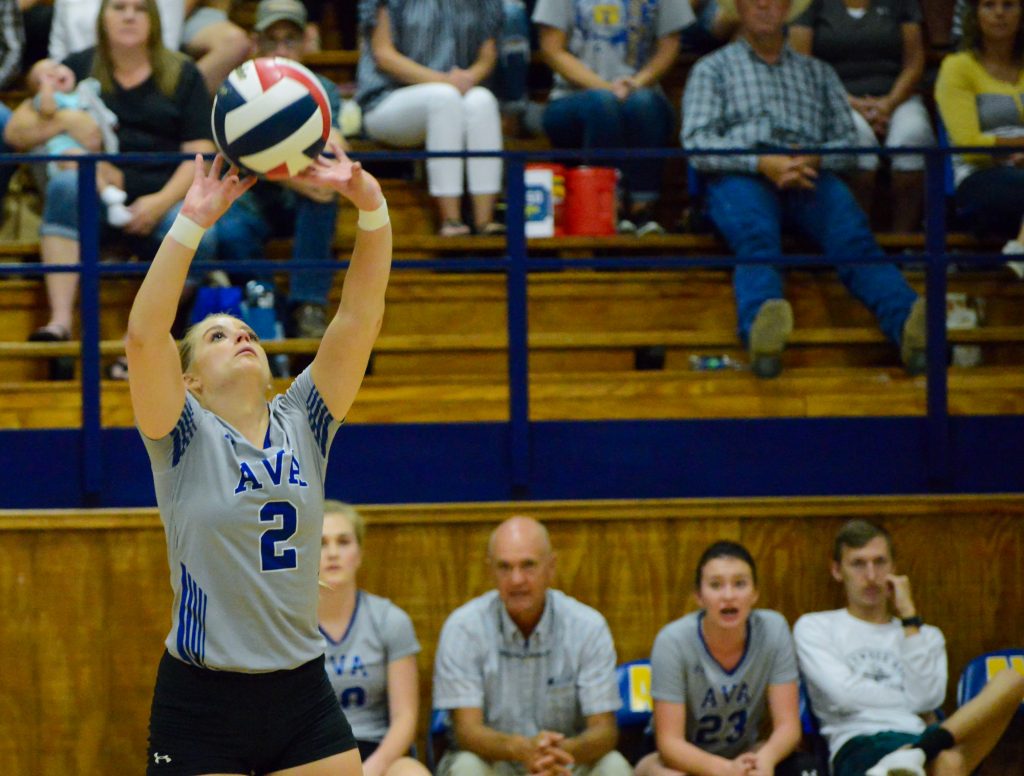 Ava junior Sara Dobbs (2) sets the ball for an attack during a match against Hollister High School on Tuesday, September 10, in Ava. (Jason Hoekema/Douglas County Herald)