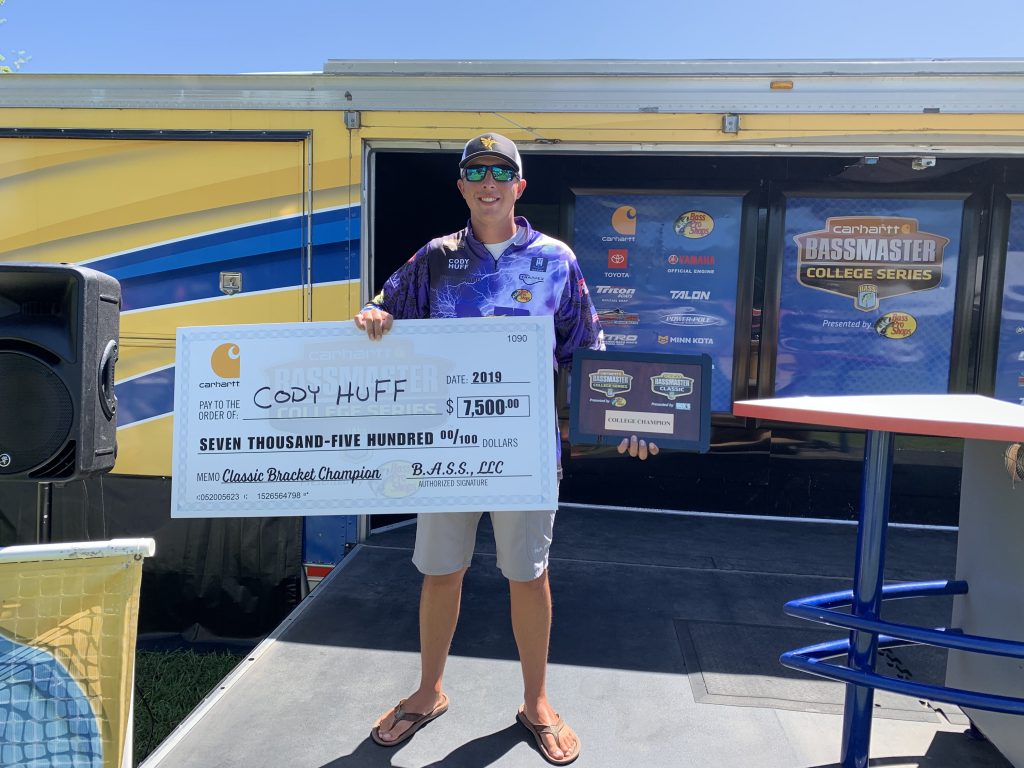 As No. 6 seed, Huff takes the win over teammate and friend, No 2 seed Carter McNeil.

SPRING CITY, Tenn. — All week long, Cody Huff was the most impressive angler in the Bassmaster College Classic Bracket, and the Bethel University angler concluded his championship run through the tournament at Watts Bar Lake on Thursday.

Huff, a 22-year old senior from Ava, Mo., caught a five-bass limit Thursday that weighed 9 pounds, 14 ounces. It wasn’t a tremendous haul, but it was enough for the No. 6 seed to seal a win over college teammate and No. 2 seed Carter McNeil in the finals.

It also helped Huff lock down a berth in the 2020 Bassmaster Classic to be held on Alabama’s Lake Guntersville. He also claimed $7,500, courtesy of Carhartt, to help pay for travel fees next year. He’ll need the cash, as his win on Watts Bar also earned him entry into each of the Basspro.com Bassmaster Opens to be held next year.

“None of this has really sunk in yet,” Huff said, shortly after wrapping up the win over McNeil, who caught two bass for a 2-7 total on Thursday.

“I’m still at a loss for words. But I’m on Cloud Nine. I’m just super blessed.”

It won’t be the first time that Huff gets to walk across the stage at the Bassmaster Classic. He and Bethel teammate Garrett Enders competed together in the Carhartt Bassmaster College Classic earlier this year. The duo was one of nine teams to fish in that event, but they didn’t fare well.

“I got my butt kicked, and I didn’t very much like the taste of that at all,” Huff said with a laugh. “So I’m excited I get the chance to go back.”

Huff was the one doing the kicking this week on Watts Bar, however. The tournament featured the Top 8 anglers from the Carhartt Bassmaster College Series Championship presented by Bass Pro Shops, held Aug.1-3 on Tennessee’s Lake Chickamauga. Competitors fished head to head on Watts Bar, with the winner in each match advancing to the next round.

Huff was successful fishing clumps of hydrilla each day of the Bracket. He discovered the method during practice and marked as many as 200 areas he could fish in competition.

His plan worked. Huff caught the heaviest bag of the day on Tuesday (12-2) to defeat No. 3 seed Cole Sands of Bryan College in the quarterfinals. He followed on Wednesday with a 13-14 limit (the heaviest haul of the tournament) to beat No. 8 seed Trey Schroeder of McKendree University.

Thursday’s bite remained difficult, and Huff was concerned his string of success might run out. But when B.A.S.S. officials gave the two finalists their only look of the day at BASSTrakk at about 10 a.m., Huff had 5 pounds to his credit and McNeil had yet to catch a keeper.

“That made me relax a little bit,” Huff said. “I knew then I just had to put my head down and fish. I had to get just one or two more good bites.”

He did just that shortly after the break when he caught a 3-pounder on a clear-colored Spook. That top-water lure was effective for him throughout the week, as was a prototype bladed jig he rolled through the top of the hydrilla, and an 8-inch Zoom Speed Worm (green pumpkin).

Huff said the Watts Bar bass never really turned on for him, so he had to cover a lot of water to find bites. He said he hit about 70 or 80 of his marked hydrilla beds, but it was a spot he already had visited that provided his big bite on Thursday.

“Right after halftime, I made a good decision and pulled into a place I had already fished,” he said. “I knew fish were there. On my 10th cast or so, I caught that one that was almost a 3-pounder. That was my fifth fish. I culled one more time later, but it was that 3-pounder that got me to a limit.”

B.A.S.S. officials kept Huff and McNeil separated on shore, so neither knew what the other had until the catch-and-release reveal was made at 3 p.m.

Huff said he didn’t count out his Bethel teammate until the totals were announced.

“That’s one of my best buddies,” Huff said of McNeil. “He’s one heck of a fisherman. That’s what kept me nervous all day. I knew I had to catch them, or he would catch me.” 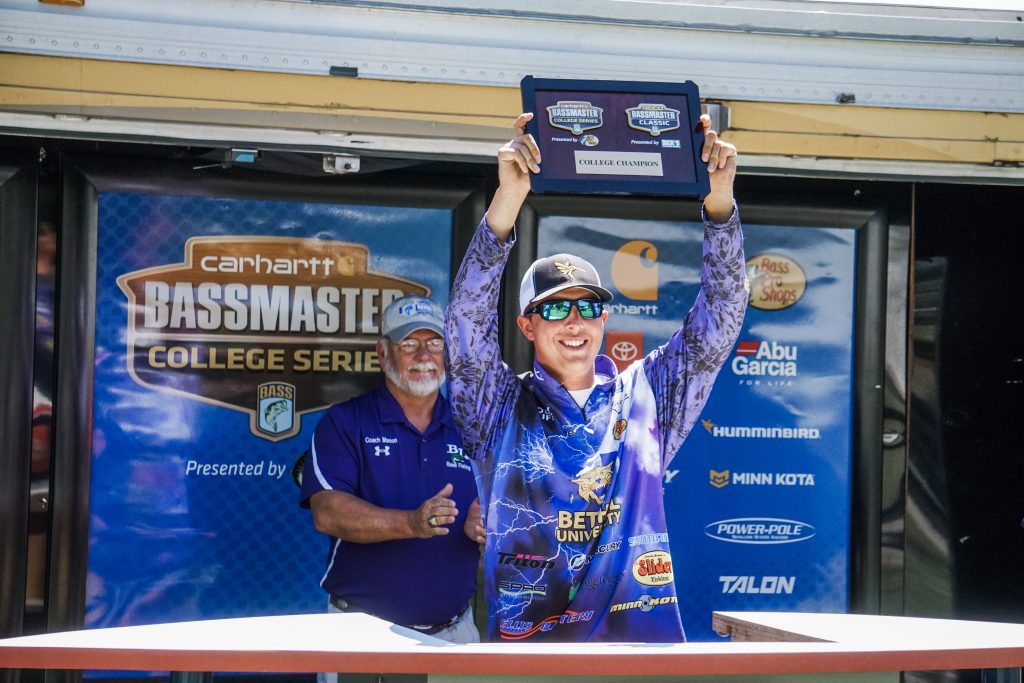