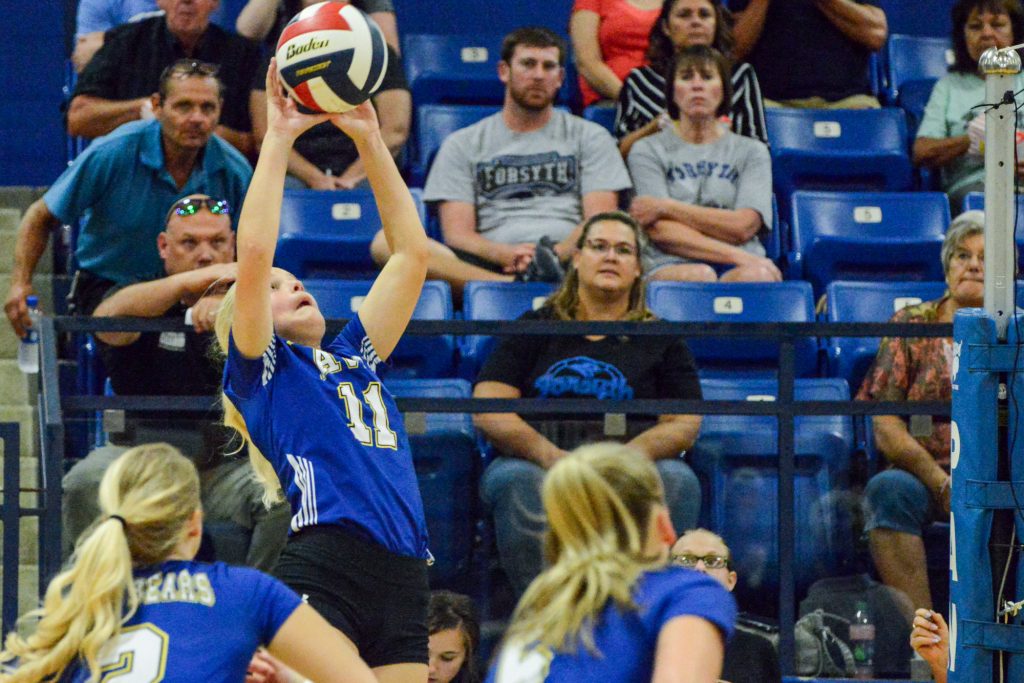 Ava High School's Samantha Keyes (11) leaps up to tip the ball over the net during a preseason jamboree against Forsyth High School on Thursday, August 29, 2019, in Forsyth, Missouri. (Jason Hoekema/Douglas County Herald)

FORSYTH – During the summer months the Lady Bear volleyball team was learning the pieces of the puzzle before putting them together in Forsyth last Thursday.

Teamwork, communication, and running sets at the net lead to kills and blocks for the team. The Lady Bears split their first abbreviated match against Forsyth, 8-15, and 15-12.

The first serve came from the Lady Panthers who were able to make a quick, three-point sprint to open the match before a fumbling of the ball gave the Lady Bears their first point.

Ava saw holes in the defense early on and tried to turn up the heat with kill attempts but points just didn’t come easy for the Lady Bears. Trailing by three, Ava caught a break with Forsyth giving up points on penalty calls and a bad serve put Ava right behind them 5-4.

It was in the second half of the first set when the Lady Panthers ran away with the game starting with a tipped ball by Baylan Alexander. From there Forsyth had a five-point rally leading the Lady Bears 14-6.

A Forsyth serve into the net and an additional point for the Lady Bears was not enough to turn the tide, Ava falling 15-8.

The match wasn’t over yet. Switching sides of the net, the Lady Bears needed to regroup for the second set of the match. Alyssa Wallace served first in the second set and a back-and-forth ended with Olivia Heriford making a kill to open the game up for Ava.

The ladies took to the scoreboard with points from kills by Heriford, a block and a tip of the ball for another point by Claire Fossett to take Ava up, 10-4.

A couple of missed sets, communication errors, and a line penalty cost the Lady Bears points allowing Forsyth to creep back up on the board, 13-11.

Finding a gap on the Forsyth side of the net, the Lady Bears ended the match on a serve from Libero Kaylee Downs ending with a hit by Fossett to close it up, 15-12.

Facing Spokane High School minutes after the 1-1 split with Forsyth, the Lady Bears ended up dropping the first set 15-17 after miscommunication and a net violation ended the 15-point tie with two free points to the Lady Owls.

Ava started the second set off on the right foot with a three-point rally before Spokane was able to tie it up at four. A kill from Fossett broke the knot allowing the Lady Bears to reach ahead, 9-7 after a kill from Haley Herrera.

Sophomore Lauren Hall showed her skills at the net with ball tips and a kill at the right moments. However, the Lady Owls creeped back up to tie the game at 14.

Herrera came up with two, back-to-back blocks to help break the knot for the Lady Bears. A touched ball on the way out gave the girls the boost they needed to walk away 16-14.

Against the Crane Lady Pirates was where the game and dynamics coach Petty had talked about in the preview article came together for the Lady Bears.

Crane lost a 1-0 rally, giving Ava the chance to pick up three points to lead 3-2. The set remained close through the end and a kill from Hall and another from Heriford put the girls in a good mindset after taking the first set 10-15.

In the second set of the match, the Lady Bears dominated. Working like a well-trained group of athletes. A serve from Hall started a six-point rally including penalties made by the Lady Priates. Later an ace from Emaly Keyes put the sting in the Lady Bears’ 11-2 lead.

A successful tip from Alexander would bring the service back to Ava after the Lady Pirates fought back, trailing 13-7.

Ultimately, a blocking duo by Sarah Dobbs and Heriford would seal the match, 2-0, for the Lady Bears.

The Lady Bears’ first season games are on the road against Springfield Catholic on September 3rd, followed by a second road game against Sparta on the 5th, and finally the home opener against Fordland on the 9th. 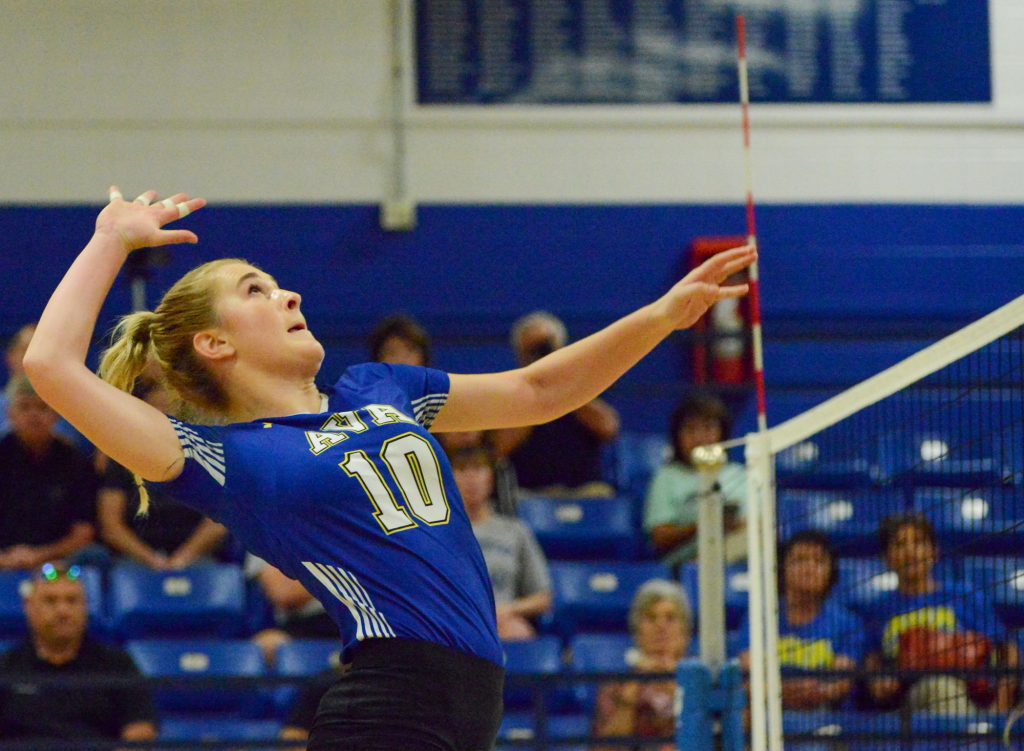 Ava’s Claire Fossett (10) times out a kill attempt during a preseason jamboree on Thursday, August 29, 2019, in Forsyth, Missouri. The Lady Bears splt their first two matches, against Forsyth and Spokane High Schools but swept Crane High for an overall 4-2 outing in Forsyth. (Jason Hoekema/Douglas County Herald)