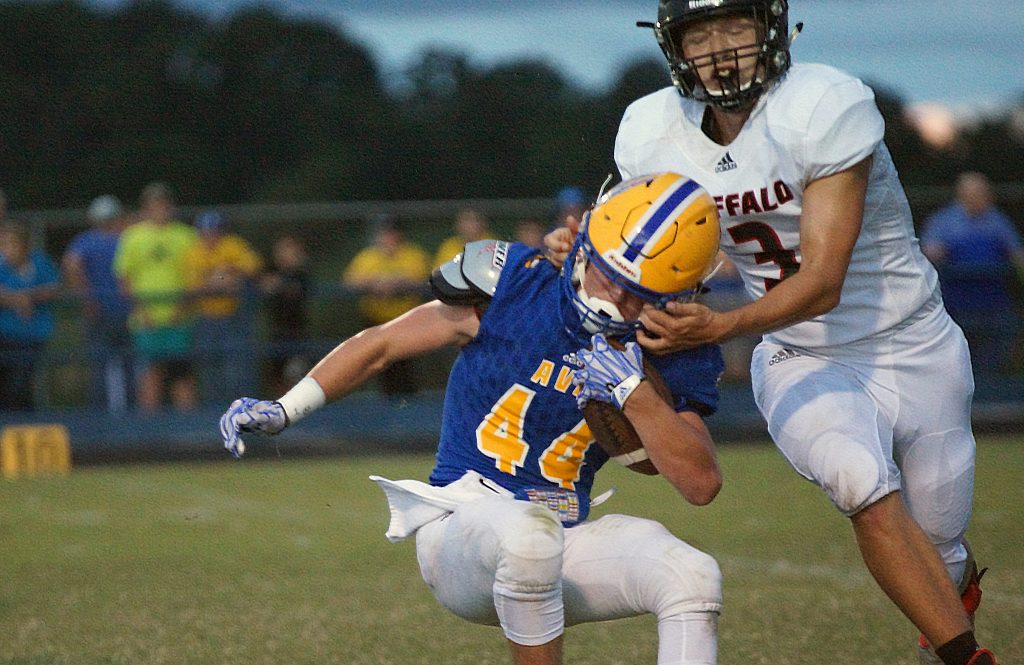 Football season is officially underway in the Ozarks. Bleachers shaking the press box, snacks served, cheering crowds, and the cooler weather of a long-wanted fall.

Everything seemed to come together for the Ava Bears last Friday, but it also nearly came apart. The Bears received the first kickoff in regulation play and moved it up to the Bears’ 32-yard line.

Out of the gate and through the Buffalo defense went senior Kayden Myers. The athletic, 210-pound running back went for 12 yards to the Bears’ 44, then tacked-on another seven to get over the 50.

Quarterback Nate Swofford made the first strike for the Bears after breaking loose and rushing for 49 yards to give Ava six points in the first two minutes of the game. He would then carry the ball again for a gain of three and the two-point conversion to blank Buffalo, 8-0.

“Offensively we played well,” said coach Dan Swofford. “I was proud of Nate and how he played in his first year as quarterback. We had a four-year quarterback with Caleb Johnson and it was great that he (could) do it in the first drive. (He) proved that what he could do and did a real good job.”

Despite two cases of dirty laundry on the field, which gave Buffalo 15 free yards, the Bison were unable to hold on the possession and punted on a fourth-and-five which was brought back to the Ava 16-yardline.

In the first three snaps it looked as if the Bears would make-well on another possession with two yards from Myers and another 13 from Swofford. However, a failed lateral to Josh Bray set the Bears back by six.

A sack and a clockwork penalty pushed the Bears back to fourth-and-19 with no choice but to punt. The Bison carried the possession over to the second quarter and a long drive led to a touchdown and extra point with 8:44 left in the half.

“It’s generally hard to get that timing down because it’s hard to simulate that in practice,” said Swofford. “You’ve got a kid in your face and you’re trying to pitch the ball. I didn’t think our timing was good.”

At this point of the game the Bison weren’t able to hurt the Bears with their passing game. With 2-of-5 in the first quarter and four failed throws in the second it looked like Buffalo had to work with their ground game to get ahead, but that also changed later in the game.

The Bears got their hands on the pigskin and cranked-out a 62-yard drive with a 41-yard rush by Swofford, who broke loose and went up the left side for a major first-and-10 on the Buffalo one-yard line.

Swofford pushed forward with the offensive line to tally another six for the Bears. The two-point conversion was good with Spencer Skyles finding the pay dirt, extending the Bears’ lead to 16-7.

The Ava defense held the Bison to a short, four down possession and took back the ball with 3:33 left in the half.

The Bears made it to the Buffalo 44 and were propelled by a costly targeting call for helmet-to-helmet contact. Now on the Buffalo 29, the Bears gave those yards back with a hold on the 33-yard line, pushing them back to the Buffalo 43.

Three timeouts from the Ava sideline wasn’t enough to spark the magic needed to find the endzone a third time from a third-and-21 situation at the horn.

At the half, Swofford had rushed for 138 yards and another 18 passing where he was five-of-six from pitchouts and laterals. Myers had carried for 59 yards and the Bears converted seven times for first downs, holding on to the ball for approximately 12 minutes and 55 seconds.

Back from the locker rooms, things changed drastically for the Bears. While maintaining a dominant amount of possession time in the first half, Buffalo came back and held on for five-and-one-half minutes before ending their first possession.

The Bison were able to stampede from their own 40 to the Bears’ one-yard line, moving the chains four times. An illegal shift call set them back five yards, and the Bears’ defense was able to hold them to a field goal after 5:35 elapsed.

The Bears also held the ball for a long 4:33 with big gains from Swofford, Meyers, and Bray for a 67-yard drive to the Buffallo red zone. Meyers found the pay dirt for six and the Bears made the two-point conversion to put them up, 24-10, with 1:52 left in the third.

The quarter came to an end with a Buffalo first-and-ten on Ava’s 36-yard line. When the clock started at 12 minutes Buffalo charged through those 36 yards for a touchdown and extra point to close Ava’s lead to 24-17.

The Bears practically gave up those yards with 20 penalty yards, the start of the Bears endgame woes. On their own 40 on first down, the ball was fumbled behind the line of scrimmage. The offense appeared shocked at the sight of a loose ball, staring at the pigskin as Buffalo made the recovery with great field position.

Buffalo went to score again on the momentum of having shocked the Bears, but it didn’t end at a tied 24-24 game. On the kickoff, the Bears fumbled the ball and Buffalo recovered for yet another fresh set of downs thanks to errors made on the Ava side of the line.

After playing defense for another 3:42, the Bison found the endzone after a big, 35-yard pass from Jamen Smith to wide-out Cameron Portis for the 30-24 lead. A failed two-point conversion left the board alone and the Bears within striking distance of a win.

“That’s life for you,” said Swofford. “That’s one of the great things about football. In life you have these times when crazy things happen to you. How are you going to respond? If you asked me what was going through my mind, it was the life lesson I’m learning right here. What am I going to do with it? (Do) I get mad and blow up? (It’s) just going to make things worse for us.”

With 5:55 left in regulation, the Bears took to the field and returned the ball to their own 30.

Swofford rushed for 27 yards and Meyers another 26 to the Buffalo nine-yard line. A toss-out from Swofford to Bray picked up another eight, just shy of the six needed to tie the game. Meyers bullied his way through the Buffalo defense for the touchdown and a sigh of relief from the Ava side of the stands.

Ava failed the conversion for the win and handed possession back to Buffalo with a long, long 1:18 left on the clock.

The Bison returned the kick to their own 33. A 28-yard pass to Buafflo’s Portis added salt to the Bears’ wound after dropping a 14-point lead.

An offensive pass interference call was made in Ava’s favor, setting the Bison back 15 yards to their own 47. At first-and-25 to go, overtime was inevitable unless they could break away on a pass. Their drive failed when a sack by Ava’s Mason Cole ended the game in a stalemate after Buffalo squandered the final minute of the game.

“I was really proud of how the boys played,” said Swofford. “Especially at the end. It was really easy to say ‘I don’t know how we’re going to stop them even if we tie up with them.’ The boys found a way. I’ve been saying all week I doubt we know who wins until the final horn goes off. In fact, we didn’t even know then at that time.”

Each team gets a shot at the pay dirt from the 25-yard line. Both defenses and both offenses get time on the field, allowing both teams to compete evenly for the big “W.”

Gain of eight for Buffalo, then a one-yard pass inches them closer. Third-and-one could be a big stop for the Bears, but the Bison pushed through for the first down.

Later, a pass nearly made it to the end zone, broken up by the Ava defense. After a timeout on fourth-and-5, the Bison pulled together a plan and scored.

Knowing that the Bears would aim to the two-point conversion, having succeeded 75-percent Friday night, the Bison drove-in three tough yards with a carry by Bode Abraham.

No signal from the referees. A thick tension filled Harlan stadium. The Bison had been stopped short.

Ava gets their turn with the pigskin. Starting on the Buffalo 25 an eight-yard rush from Skyles put the Bears on the 17 on second down.  A side-out to Bray earned the Bears another nine yards before the ball came loose on the tackle.

The line judge quickly called the play dead, Bray having been down before the slip.

Three yards from Meyers. Four from Swofford. On third-and-goal the ball goes to Myers for the touchdown.

The Bears converted for the extra two points and the game was set in stone, 38-36, for the first win of the 2019 season.

Next in line to face the Bears are the Hallsville Indians who are also 1-0 after a 40-0 shutout against Father Tolton Regional Catholic, both Class 2 District 5 teams.

The Bears haven’t seen the Indians in over a year where Ava shut them out 31-0 in August of last year and will host them tomorrow in Ava at 7 P.M.