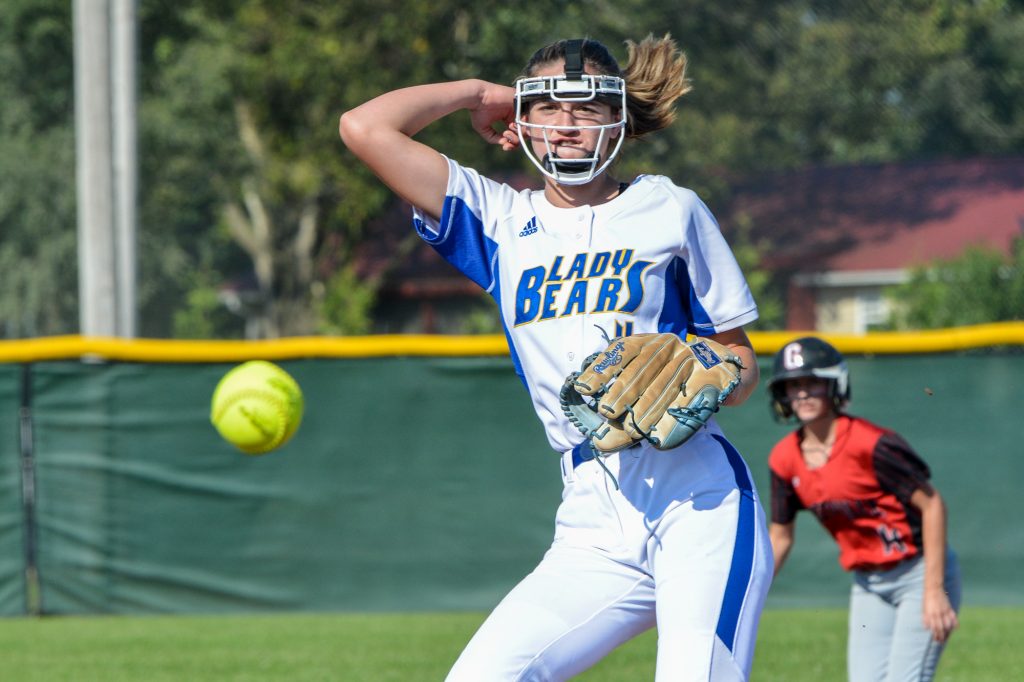 Sophomore Pitcher Julia Henry (4) delivers a pitch during the season and home opener against Gainsville High School on Tuesday, September 3, 2019, in Ava, Missouri. Henry had 11 strikeouts and three runs in her six innings inside the circle. (Jason Hoekema/Douglas County Herald)

They call it the “one spot” for a reason. A pitcher is not only the first with the ball, they are the difference between a hard-working defense or a defense that works too hard.

Ava has found the former with Julia Henry, the sophomore who racked-up 11 Ks in her first official outing of the 2019 season against Gainesville High School.

“She’s going to get better and better as we go,” said coach Rex Sawyer after the game. “That’s all there is to it. We’re trying to throw a few different pitches and that’s the reason she’ll get deep in the count every now and then. It’s because I’m making her throw a different pitch, just so down the road we can (throw that pitch).”

Start of the game under a hot, searing sun in the late afternoon was enough to make some head back to the car to watch. And they missed an explosion in the first inning.

Henry allowed two hits to start things off but quickly found her groove, putting away the Lady Bulldogs’ third batter after the defense had worked to pick-off a runner heading to second. Two away, another batter got a piece and Henry put the next one away with a whiff.

Lexie and Olivia Gastineau both picked up walks during their first appearances at the bottom of the first. Henry followed shortly after with a walk on the 0-3 pitch. Bases loaded and no outs set Gainesville up for what happened next.

Regan Koop found a hole in the defense, reaching for the RBI single. Miquia Heinlein fired one to right field which was dropped for another RBI single.

The revolving door at home plate didn’t seem to stop at three, Koop and Heinlein completing the diamond after Macee Cutbirth took a hit and Keeley Akers reached on an error.

Ahead 5-0, the Lady Bears had cut deep into the Lady Bulldogs’ deficit early.

“I was telling the girls that if you don’t ever lose a single inning, you win the ballgame,” said Sawyer.

The next at-bat for Gainesville didn’t turn the tide. Henry tallied up another two Ks after making the stop for a 1-3 play for the first out. Gainesville had gone three up, three down, and were on their second pitcher by the end of the first.

At this point, Ava was batting around the order through the second inning, picking up three more runs in the second to extend the lead. Henry picked up her second run of the game before courtesy runner Sara Mendel was sent in during later innings.

Heinlein smacked a liner out to left field for a double followed by a walk by Cutbirth. The two finished their lap around thanks to at-bats from Makayla Miller and Devin Rowe to make the game a daunting 8-0.

Both teams seemed to slow down in the third through fifth innings, but Henry was still making batters swing and miss. By the end of the fifth, she had put away nine batters on eight whiffs and one called strike three.

Between her and the defense catching fly balls and stranding baserunners, the Lady Bears were just two runs from run-ruling the game. Despite having five runners reach scoring position, the Gainesville defense woke up after sending-in their third pitcher, Erin Mckinzie.

At the top of the sixth the Lady Bears let the top of the order reach first on an error in right field. One out from Henry’s tenth strikeout was all that was away. Gainesville’s Hallee Donley picked up an RBI double followed by a hit which took the Ava defense out of the equation.

A solid, two-run homer over the left-center field fence by Shayla Wages put the Lady Bulldogs back within striking distance of the Bears who still led, 8-3.

“The thing that we have to do against good ball clubs… when you get somebody down like we had them (at) 8-0, you need to go out and put them away,” said Sawyer. “We had a couple innings where we could have put them away and we didn’t do it. Better ball clubs (can) come back and haunt you in the end.”

Sawyer’s words rang true in the chase to beat the opponent in every inning. The Lady Bears retaliated with five runs of their own in the bottom of the sixth, run-ruling Gainesville 13-3.

Makayla Miller took a swinging strike three to start the bottom of the inning. Rowe reached first on balls as did Lexie Gastineau. Rowe had circled around the bases on a wild pitch, a steal, and scored on a passed ball.

Olivia Gastineau delivered an RBI single after smashing the ball into the left-centerfield fence, forcing the outfield to chase after it while she picked up an extra base at second. The Lady Bears led 10-3.

Julia Henry made her fifth plate appearance of the game. She was picked-off at second on a 1-4 double play and flied-out to the pitcher in the fifth.

This time she hit an RBI double to left field before courtesy runner Sara Mendel took over baserunning. Koop reached on balls and Heinlein hit the ball to the same sweet spot in left field for an RBI double bringing-in Mendel.

The game came to an anti-climactic end after Cutbirth and Akers were walked while Koop tagged up for the 13th run of the game. At ten runs ahead, the game ended early with a victory for the Lady Bears.

“First game out I thought we played pretty good ball,” said Sawyer. “The coaches and I are still trying to figure out a few different things, trying to trick the lineup around a little bit as far as hitting in the field what we need to do the best. But overall, I was very happy.”

The Lady Bears set out to face Dora High School at home today. The game start at 4:30 may test the Ava softball team on the diamond.

“(Dora is) a very good ballclub,” said Sawyer. “They’re always very competitive. They play good softball down there. It’ll be a good contest, and we are equally matched. Whoever makes the fewest mistakes will win that ballgame.” 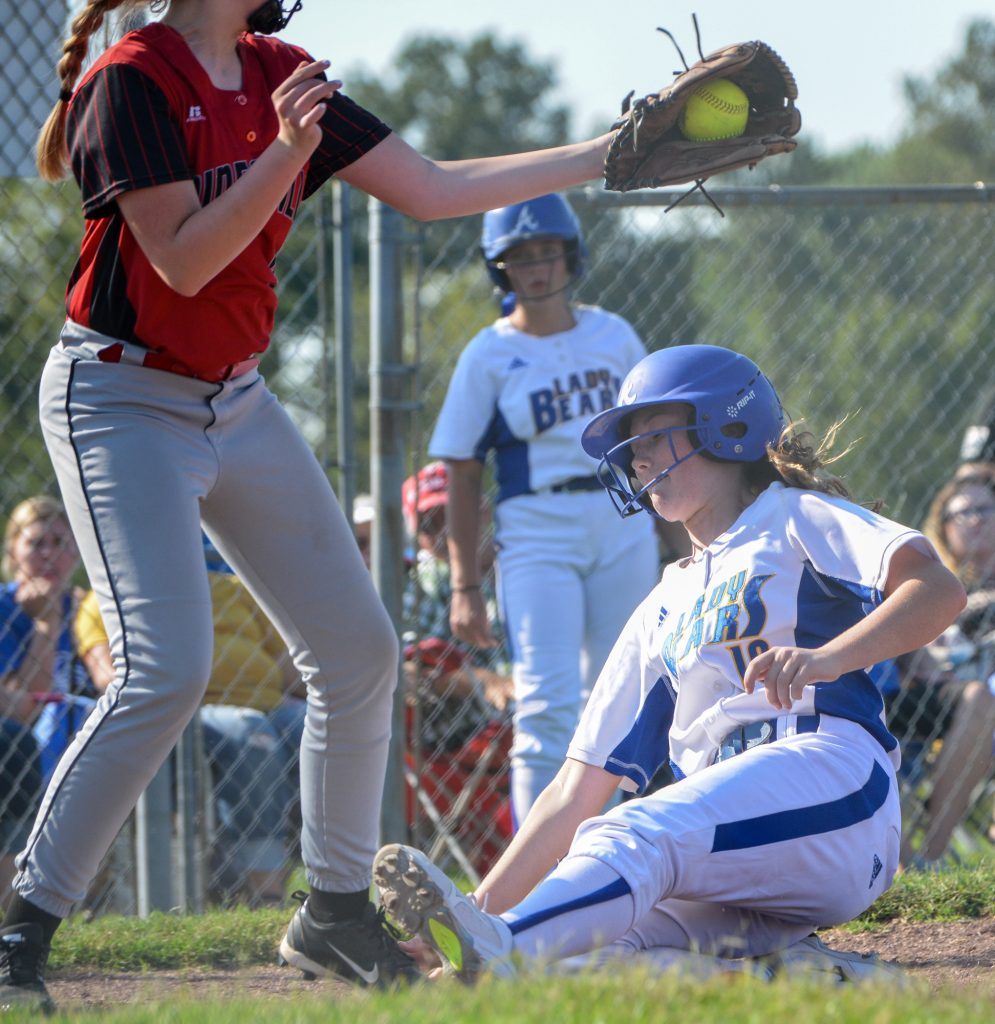 Ava High School’s Olivia Gastineau (10) slides into home plate for the team’s second run in the first inning against Gainesville in the Lady Bears’ season and home opener on Tuesday, September 3, 2019, in Ava, Missouri. (Jason Hoekema) 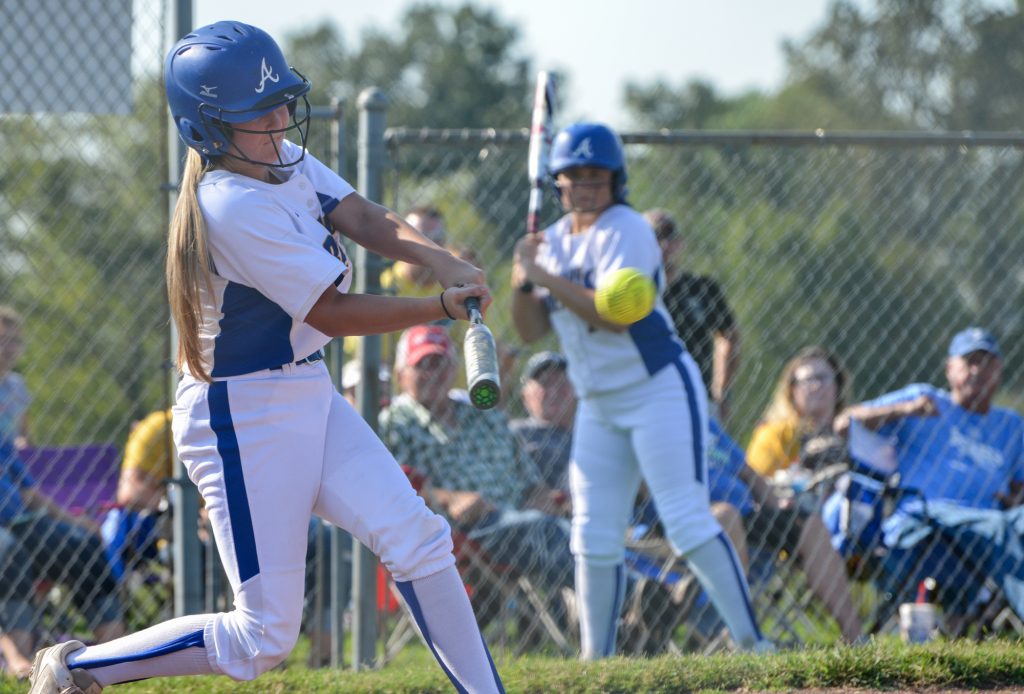