The thunderstorms that passed through this region Tuesday evening brought the most significant rainfall amounts the Ava area has seen in the past three months, but with the storm came very damaging lightning.  The brick chimney on the Douglas County Courthouse apparently took a direct hit from a lightning bolt just before midnight, causing the chimney to explode and scattering brick and mortar over an area spanning several hundred yards.

The Bears will field a senior-dominated, veteran squad with 15 returning lettermen and 16 seniors. Ten of Ava’s 11 probable offensive starters Friday night will be seniors.

Volleyball Coach Marian Lansdown has six lettermen back from a year ago, and says this year’s squad will be a very well rounded team, with a good mixture of seniors and underclassmen. Returning lettermen include seniors Alisha Swofford, Beth Greene, Brooke Strong and Laura Strong, and juniors DeAun Gray and Heather Roberson.

Clayton James Hodges was honored on Sunday, Aug. 28 with cake and ice cream and gifts for his 4th birthday.

A surprise birthday party was held on Saturday, Aug. 13 for Florence Rantz’ 90th birthday at her home.

Cpl. Mark Allen of the U.S. Army’s 123rd Signal Battalion was one of thousands of soldiers of all nationalities to take part in this year’s 78th Nijmegen march in Holland. The 100-mile, four-day walk through the Dutch countryside began Tuesday, July 19, and ended Friday, July 22.

Loire Aubrey received a master of science degree in elementary administration on May 14 at Fort Hayes State University, Fort Hayes, Kansas. Loire is the daughter of Raymond and Suzanne Phillips, formerly of Ava. 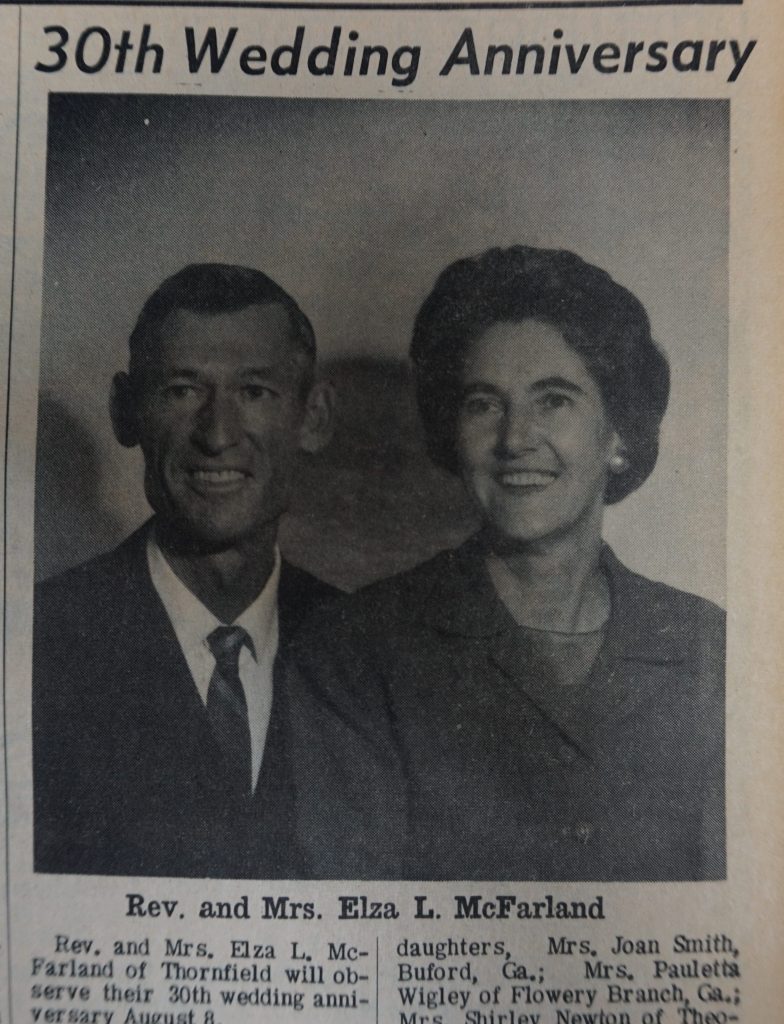 Members of Amalgamated Clothing Workers Union Local 481 staged a brief walkout at the Rawlings Sporting Goods Company here last Thursday, but most of the 200 workers were back on the job Friday morning, according to Lou Prince, plant manager.  A contract agreement was reached between Rawlings and the union late Thursday, officials said.

A group of dairymen met at Ava on August 13 to organize a D.H.L.A. Association for Douglas and Ozark counties. The officers and directors elected at the meeting are Hershell Letsinger, president; Billy Clouse, vice president; Jim Watterson, secretary-treasurer; Edgar Rogers and Clifford Claar, directors.

“If we don’t have a winning season this year, I’ll quit,” Ava coach Dolan Hawkins said this week about his football squad, “and I don’t plan to quit,” he added. 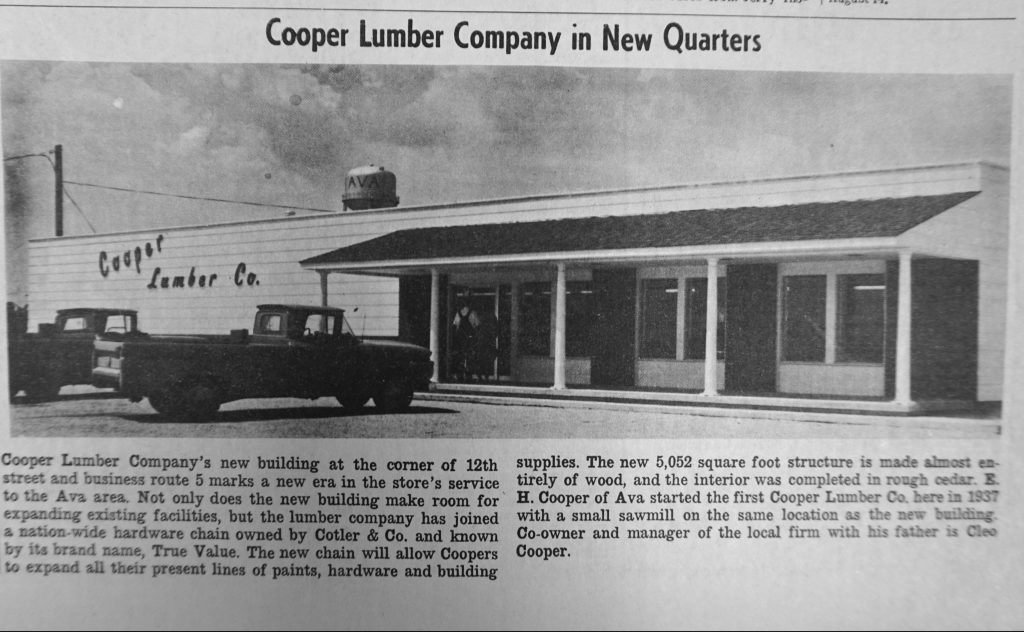 Mr. and Mrs. Curby Welch of Ava announce the engagement of their daughter, Sandra Arlene, to Sp. 4 Gerald L. Walker, son of Mr. and Mrs. Russell Walker of Almartha.  Miss Welch is a 1969 graduate of Ava High School. Sp. Walker is a 1964 graduate of Gainesville High School and is serving in Germany with the U.S. Army.

Mildred Atchison and Vivian Uhlmann Curry  completed work on their master of education degrees at Drury College this summer.

Mr. and Mrs. Virgil Porter observed their golden wedding anniversary August 9, at the Presbyterian Church near their home in Boonville, Ark.  Mr. and Mrs. Porter were married August 23, 1919 near Wasola.

Nathan M. Kilgore of the South Range Ranch, northwest of Ava has completed a course in servicing electrical appliances and has been awarded a diploma by the National Radio Institute of Washington, D.C.

BLACK JACK –– Mr. and Mrs. Wayne Tooley and two sons were dinner guests in the home of Mr. and Mrs. Lowell Parsons Sunday. 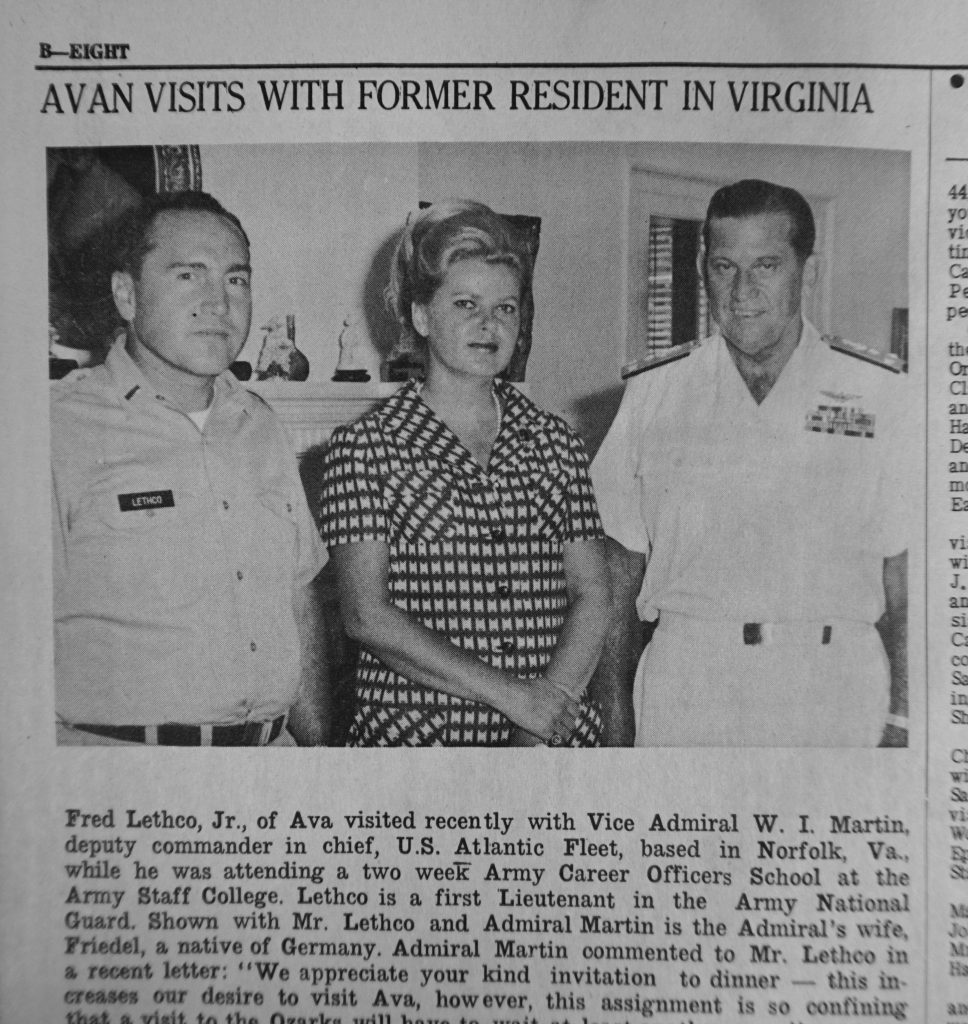 Approximately 175 youngsters and their parents met at the MFA Hall Saturday night to honor Coach Carl Roebuck and his family.  Coach Roebuck has shown such an interest in the young ballplayers and sport, working many hours with all ages, the parents and boys wanted to show their appreciation by giving the family a dinner.

Miss Pam Pettit, daughter of Mr. and Mrs. Cloine Pettit was graduated from Southwest Baptist College in Bolivar Aug. 14, and was awarded a bachelor of arts degree in psychology. 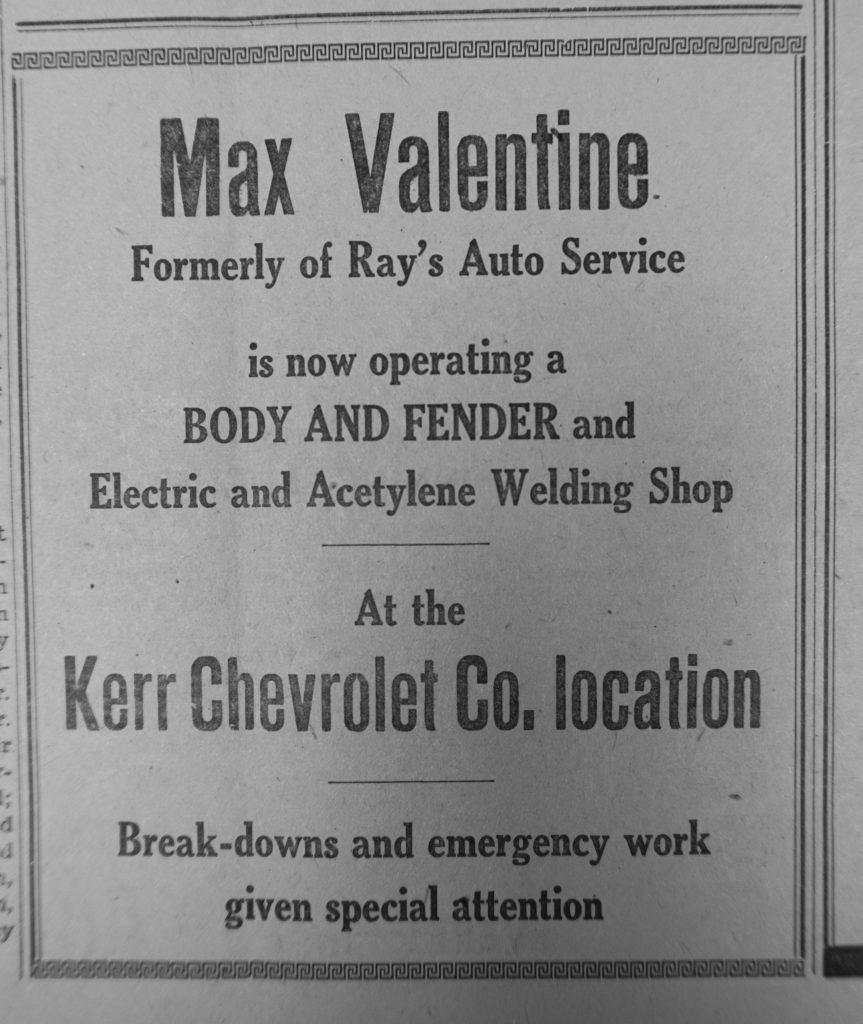 WITH U.S. MARINES ON GUAM (UP) –– Rabbit hunting in the Missouri Ozarks and Jap hunting on Guam are essentially the same to Marine PFC Lowell Lambert, of Ava, Missouri.  He uses a shotgun for both. But Lambert has been known to admit to the Marines who visit his fresh-air barber shop that there is one major difference.  “Those Missouri rabbits,” he says, “don’t shoot back.”  Lambert’s official job is company barber.

Brushyknob High School is being suspended this year and will transport its pupils to Ava High School for the 1944-45 term.  C. W. Parker, Ava superintendent, is expecting the district to send 26 students here. The students will be brought in in a bus operated by Paul Hesterley.  Two other school district, Lakey and Nubbin Ridge, also have contracted to bring all their grade and high school students to Ava this year.

In 1914 Margaret and Dora Smith raised a flock of geese on their farm in the Souder community. The last surviving one of the flock died last week at the age of 30 years.

Otis Nall has been awarded the purple heart for being wounded in action in France.

Mr. and Mrs. H. T. Shipman and son, Leonard, who recently returned to Ava from Los Angeles, California, have sold their residence property in Ava to Mr. and Mrs. Corbin Bond and have bought the Lone Star Tourist Camp, two and a half miles west of Springfield on Highway 66.

C. S. Neiman, newly elected chairman of the Douglas County Democratic Committee, has been named on the committee on arrangements for the notification to the vice presidential nominee, Senator Harry S. Truman, at Lamar August 31.   Ceremonies for Senator Truman will start at Lamar at 8:30 a.m.

934 Missouri physicians are serving in their country’s armed forces, it is shown in a survey conducted by the Missouri State Medical Association.  The physicians represent 76 of the Missouri’s 114 counties.

Mrs. Everett Reynolds and daughter, Sue, left Ava Sunday for Springfield where Mrs. Reynolds will manage an apartment house in the Southwest Teachers College area.  Mr. Reynolds will remain in Ava for the present time but plans to join his family in Springfield at a later date.

Staff Sergeant Lowell Quick has been reported by the War Department as missing in action in the European area. Sergeant Quick is the son of James E. Quick of Ava. His wife Lela, and their daughter Shirley Mae, also live here.  Serving as waist gunner on a Liberator bomber, he recently completed his 100th mission and was awarded the air medal.

Paul L. Severns, Jr., whose parents live at Seymour, broke the custody of jailer and deputy sheriff, Grant Eslick, last Thursday evening of last week in an attempt at freedom. Mr. Eslick had released Severns from the jail to empty some pots and while locking the jail door on other prisoners, Severns proceeded ahead down the stairs and upon reaching the outside door broke to run. Severns was captured Friday morning about four miles out of Seymour by Chas. Anderson, farmer and stockman, who lives at Granada.

The docket for the September session of the Douglas County Circuit Court which convenes in Ava on September 15, contains only 16 criminal cases and a number of these were continued from previous sessions for various reasons.  The civil docket while perhaps longer than usual with 15 divorce cases. 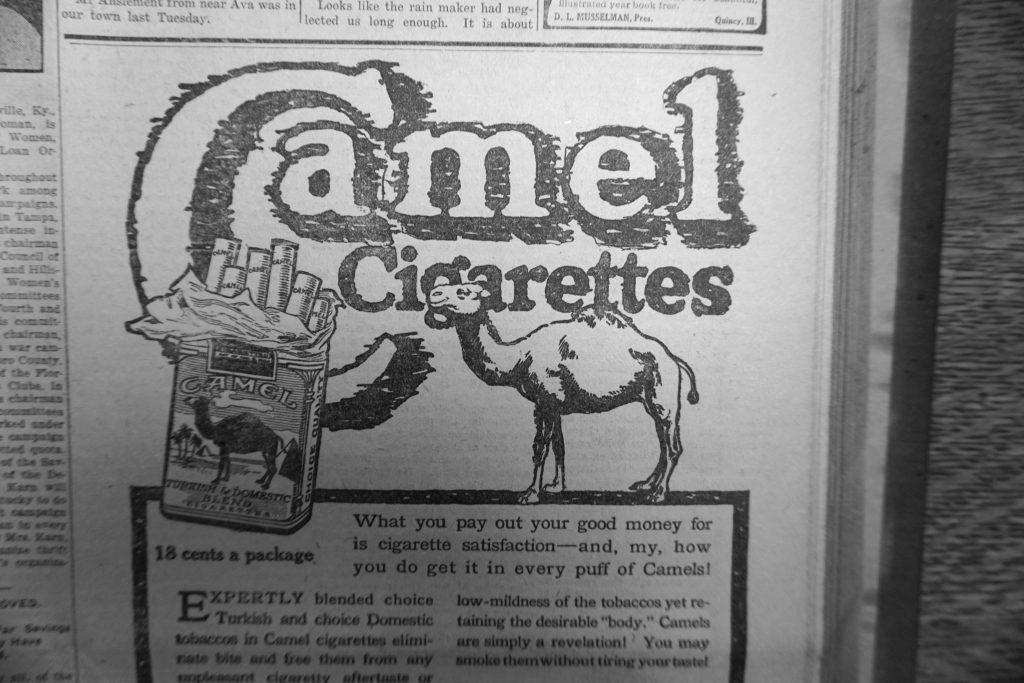 The enrollment at the Ava High School Monday was perhaps the largest in the history of the school for opening day. Enrollment for opening day was as follows: high school, 116; fifth and sixth grades, 49; fourth grade, 33; third grade, 30; second grade, 47; primary and first grade, 45; making a grand total of 320.

Carey Fike, a farmer on Brush Creek, was instantly killed by a stroke of lightning on Wednesday of last week. Fike was at work in a field when an electric storm came up and took shelter under a nearby tree. The body was found about sundown.

The country home of ex-assessor, J. H. McMurtrey on Fox Creek, was destroyed by fire on Thursday of last week. The blaze is supposed to have originated from a defective stove pipe.

The Reynolds & Cody store, conducted by Miss Maud Reynolds, at Mansfield was entered by burglars on Tuesday night last week. The next morning the store looked like it had been struck by a cyclone, as goods were scattered all over the floor.  Entrance to the store was gained by throwing a bolt through a rear window and then unfastening the window. The lock to the warehouse in the rear of the store was cut off with an old ax. The burglar is still at large.

Misses Orla Mankin and Ethel Miller of Ava will attend the Southwest Teachers’ College in Springfield this year.

Cecil Reynolds arrived last Thursday on discharge from the Army and has accepted his old position at the Bank of Ava.

Carl Mays, pitcher for the New York Yankees, visited Ava on Saturday of last week. Mays pitched a winning game for the Yanks at St. Louis on Friday last week.

Cole Coffeen has bought the Tommy Robertson residence on Maple Street. Mr. Robertson who has been employed at the Yellow Front Store for the past few years, contemplates moving to his farm south from the city.

Mrs. A.M. Livingston of Springfield, field secretary of the Missouri Anti-Saloon Alliance will lecture at the M.E. Church on Sunday and at Cross Roads school house on Cowskin Creek at 8:00 p.m..

There is mourning in a little cottage on Grand Avenue, Independence, Missouri, caused by the accidental discharge of a revolver during an amateur performance at Lee’s Summit Saturday night. As a result of the shooting, J.P. Leatherman is dead and Fred Gibbs is temporarily insane.  It was a merry company of amateur performers that left Independence Saturday night for Lee’s Summit – a grief stricken party returned yesterday morning.  As the play, “The Postal Clerk,” progressed to the point in the third and last act where it was the duty of the detective to rush in and place the villain, the postmaster under arrest, Gibbs, the detective rushed from the dressing room and according to an eye witness, discovered that he had not secured his revolver. He borrowed a revolver from Clarence Mott, a by-stander, and everyone was horrified to hear the weapon explode.  Leatherman sank to the floor, exclaiming “My God, I am shot!”

Birdshot is believed to be good enough for people who pull up watermelon vines.

The water in the Osage River is so low that the catfish are developing rudimentary feet.

Bloodhounds have apprehended Ike England for the murder of Tip Foley in New Madrid County.

A Belton farmer raised 62 bushels of corn to the acre this year and he has already measured and sold it.

A two-legged colt was exhibited at the Maryville horse fair. The animal is about two months old and can walk quite well in an upright position.

The Douglas County Normal opened its doors to 131 pupils on Monday.

Judge Seay, governor of Oklahoma Territory, has entered his son as a student at the Mountain Grove Academy with a view of preparing him to enter the West Point Military School.  Prof. Lynch is gaining a national reputation as an instructor making the Mountain Grove school a great success.

W. J. Fulton, Republican candidate for Circuit Clerk, was in Ava on Sunday and left for Vera Cruz on Monday.

The Thornfield Normal and Business Institute will open Sept. 4 better equipped than ever before for giving ladies and gentlemen a thorough and practical literary, musical, scientific, classical or business education.

The public may possibly be stupid but it is unable to see any important moral difference in signing a tariff bill and making it a law by some other equally sure method.

John Eisiminger, under sentence for the murder of Samuel McCoy, escaped from the Waynesburg, Pa., jail. He left a letter saying his reason for leaving the jail was that he was not treated right, and offering to return on condition that the sheriff make a deposit of $500 to insure the murderer’s wife the privilege of visiting whenever she wished.