On Saturday, Jewel Ellison of Roy was honored with a surprise birthday party to celebrate her 90th birthday.

DOGWOOD –– Alverta Hargis gave her 86th birthday offering and was presented with a bouquet of flowers.

The hot weather is still with us.

Martin and Lula Kellogg’s daughter,  Anita Lyon of Farmington, Mo., spent from Friday to Sunday with them.

MOUND –– Ed Bray enjoyed his 73rd birthday Sunday, Aug. 14. All of his children and grandchildren attended church with him at Mound.

Cooper Lumber Company’s new building at the corner of 12th Street and Business Route 5 marks a new era.  E.H. Cooper of Ava started the first Cooper Lumber Co. here in 1937 with a small sawmill on the same location as the new building.

Plans for repairing and rebuilding parts of the fairground’s facilities were discussed in a meeting of the Missouri Fox Trotter’s Association and the Ava City Council last Monday night. The association donated $1,000 and the city is to give $3,000 for the needed repairs.  The money will be used to tear down the existing animal pens and build 60 new pens at the fairgrounds and then roof the entire pen area.

Mary Kay Davidson, daughter of Mr. and Mrs. Glenn E. Harnden of Route one, Ava, has signed a contract to teach in the public schools in Branson for the 1969-70 school year. Mrs. Davidson graduated from the School of the Ozarks in May of 1968, where she majored in elementary education.

Spec. 5 Dale Stamper, who has been spending a 30-day leave in Ava with his parents, Mr. and Mrs. Leslie Stamper, left Monday enroute to Vietnam where he will begin an extended tour of duty with American Armed Forces this week.

Mr. and Mrs. Albert Uhlmann of near Drury will observe their golden wedding anniversary Sunday, Aug. 10.  Mr. and Mrs. Ulhmann were married Aug. 10, 1919 in Muskogee, Okla. They have lived their entire lives in Douglas County.

BRUSHYKNOB –– Bob Stone-rock has returned from overseas duty and will be at home with his family.

Miss Janey Sue Vinson, daughter of Mr. and Mrs. Orvil Vinson, Ava, is one of 46 girls graduating from the Burge School of Nursing in Springfield.

Sp. 6 Edward L. Smith, son of Lt. Col. (ret.) and Mrs. Gerald W. Smith, Route 5, Ava, has returned after completing an 18-month tour of duty in Vietnam as a member of the 101st Airborne Division. 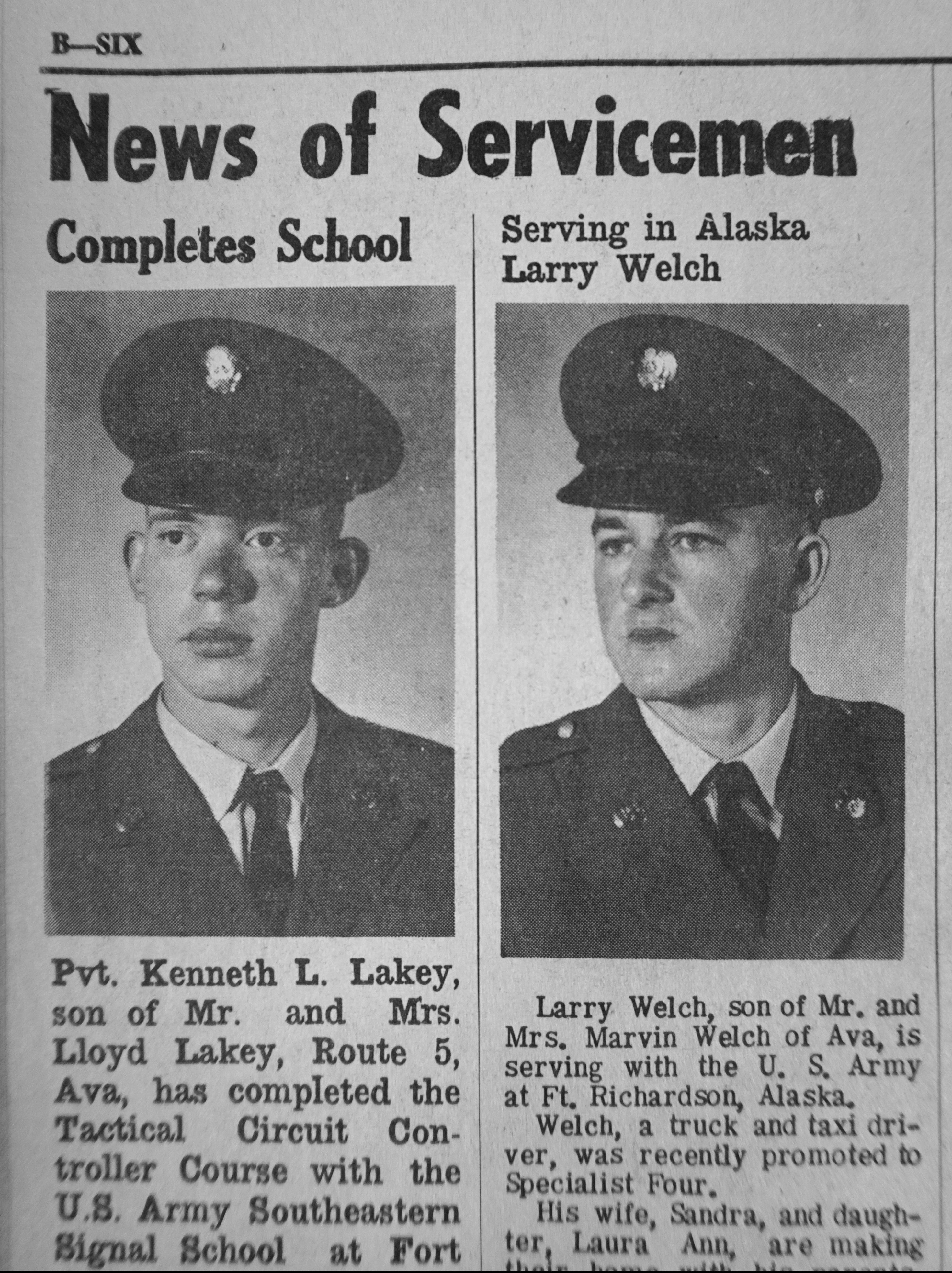 Allied Armies successfully landed on the southern (Mediterranean) coast of France Tuesday clamping a gigantic vise on that country from the southeast and the northwest.

Joseph V. Pitts, president of the Douglas County Sunday School Council of Religious Education, this week asked for the cooperation of ministers and Sunday school workers in setting aside the first Sunday after the “day of victory” as a day of prayer and thanksgiving.  In his appeal he said: “We believe the day of victory is coming, and we hope it is coming very soon….”

Construction of five and a half miles of Route O between Goodhope and Dogwood has been selected by the state highway department as the most satisfactory winter work for the headquarters construction force, and work on the route will begin in October or November, it is announced by W. B. Werbitzky of Willow Springs, division engineer.

One wolf has been trapped by the trapper employed to work in Douglas and Ozark Counties for the next six months. He took his first wolf near Longrun, in Ozark County.  He has a camp in the Squires community. He started work in Douglas and Ozark counties August 1 for a six-month period. Half his salary is paid from state and federal funds and the other half comes from local farmers.

Lloyd T. Lathrop, recently discharged from the Army, now is at home with his parents, Mr. and Mrs. Steve Lathrop, and his small son, Robert.

Private Doyle Irby who has just completed a course in an Army paratroop school in Fort Benning, Georgia, is a furlough guest in the home of his mother, Mrs. Wesley Naugle. Private Irby will leave tomorrow to return to Fort Benning.

Miss Louanna Mae Grabeel returned to her home in Ava Wednesday last week after spending a few days vacation in Kansas City. While in the city she was a house guest of her aunt, Mrs. Thelma Waters.

Word has been received by the parents of Harry R. Stafford of his promotion from first lieutenant to captain. He has also been awarded the air medal, two oak leave clusters and the distinguished flying cross.  Captain Stafford is pilot of a B-17 bomber and is stationed in England. Another son, Corporal Harrison Stafford, stationed in New Guinea has also been receiving his share of honors. He received the bronze star for gallantry  in action, the APTO medal and the good conduct medal.

Mr. and Mrs. Charley Jones and son, Leonard, entertained Sunday in their home west of Ava in honor of the birthdays of Mr. Jones and his grandson, Marion.

E. W. Rozell and I. E. Smith, farmers residing near Hercules, Taney Co., have been placed under arrest charged with the murder of Abner Holcomb, who was found fatally wounded in the woods near his home about seven miles across the Douglas County line from Brownbranch about midnight Tuesday night.  Before Halcomb died, he is said to have told how he was overtaken by Rozell and Smith while crossing the McKeeman farm owned by one of the accused men.  Holcomb is said to have told in his story that the men accused him of killing some cattle belonging to them. A quarrel ensued which culminated in the shooting.

The county court on Tuesday morning made application to the State Highway Department for the $64,000 state aid to be applied on a state road from the Douglas County line by way of Gainesville to the Howell County line.  The county is to put up $16,000, making a total of $80,000 to be applied in building the road.

Benton Township voted the full stock law at a special election held last Tuesday. The vote was 129 for the law and 20 against.

A fine baby girl made its arrival at the home of Prof. and Mrs. J.G. Farmer of Ava on Wednesday of this week.

GIRDNER –– Mr. and Mrs. L. E. Thurman are the proud parents of a fine baby girl.

John John, who lives north of Ava, was called to Springfield on Thursday of last week to attend the funeral of his oldest sister, Mrs. Chas. Sumpler, who died suddenly that morning.

BUCKHART –– So many of the farmers are keeping their table well supplied with squirrel now days, since these little animals seem to have taken charge of the corn fields.

Miss Ethel Spurlock who has been attending Teacher’s College at Springfield is home again till her school begins.

Kirksville has voted for local option.

Glenwood “fired” anvils in the morning and it rained that night.

The school libraries of Webster County have gained 800 volumes in five years.

Wright County has as many children of school age now as she had total population five or six years ago.

A Chillicothe youth who went out of town to steal a farmer’s melons returned well “plugged” with bird shot.

The “Missouri Mule Company” has been organized at Sedalia. The title does not apply to the corporation, but to the Missouri product in which they deal.

California has trees that have been proven by scientists to be 3,000 years old.

A remarkable statement is made that during the last 100 years, France has lost 6,000,000 soldiers in war.

J. J. Cain and W. C. Foyd, of Stanberry, Mo. passed through Ava Tuesday on their way to Thornfield where they will teach in the Thornfield School.

A fellow often thinks that a girl “by any other name would be as sweet,” but he finds out his mistake after he gives her his own.

The new passenger station of the Chicago Great Western Railway at Kansas City is not only the most complete station in Kansas City, but the most centrally located being at Second and Wyandotte streets but a few blocks from the business center and adjacent to cable and electric lines. Passengers traveling to Kansas City and to the southwest are now assured of splendid depot accommodations by the Maple Leaf.

An ancient bell dug out of the ruins of an Indian Church at Albuquerque was pronounced by local experts to contain gold worth $11,000. After the Denver mint worked on it 48 hours the discoverers were handed a neat brass brick worth $4.25.

The latest use for aluminum is as a substitute for lithographic stones. Its lightness is one of the strongest features.  On the other hand its use for surgeons’ tools is gradually diminishing as it bends so easily, and cannot with any known alloy be made hard enough for the purpose required.

One wife acted just as all men say a wife should act, and her husband left her.

Few of us need a lantern in order to find fault.

There may be educated pigs, but there are none that do not like mud.

The man who invented work evidently had nothing to do.

An optimist is a man who believes that all eggs will hatch.

S. S. Kirkham is repairing the roof of the school building.

L. O. Hailey has been appointed recorder of the county to fill the vacancy caused by the division of the office of circuit clerk and recorder.  Mr. Hailey has forwarded his bond for the necessary approval and expects to take charge of the office in a few days. 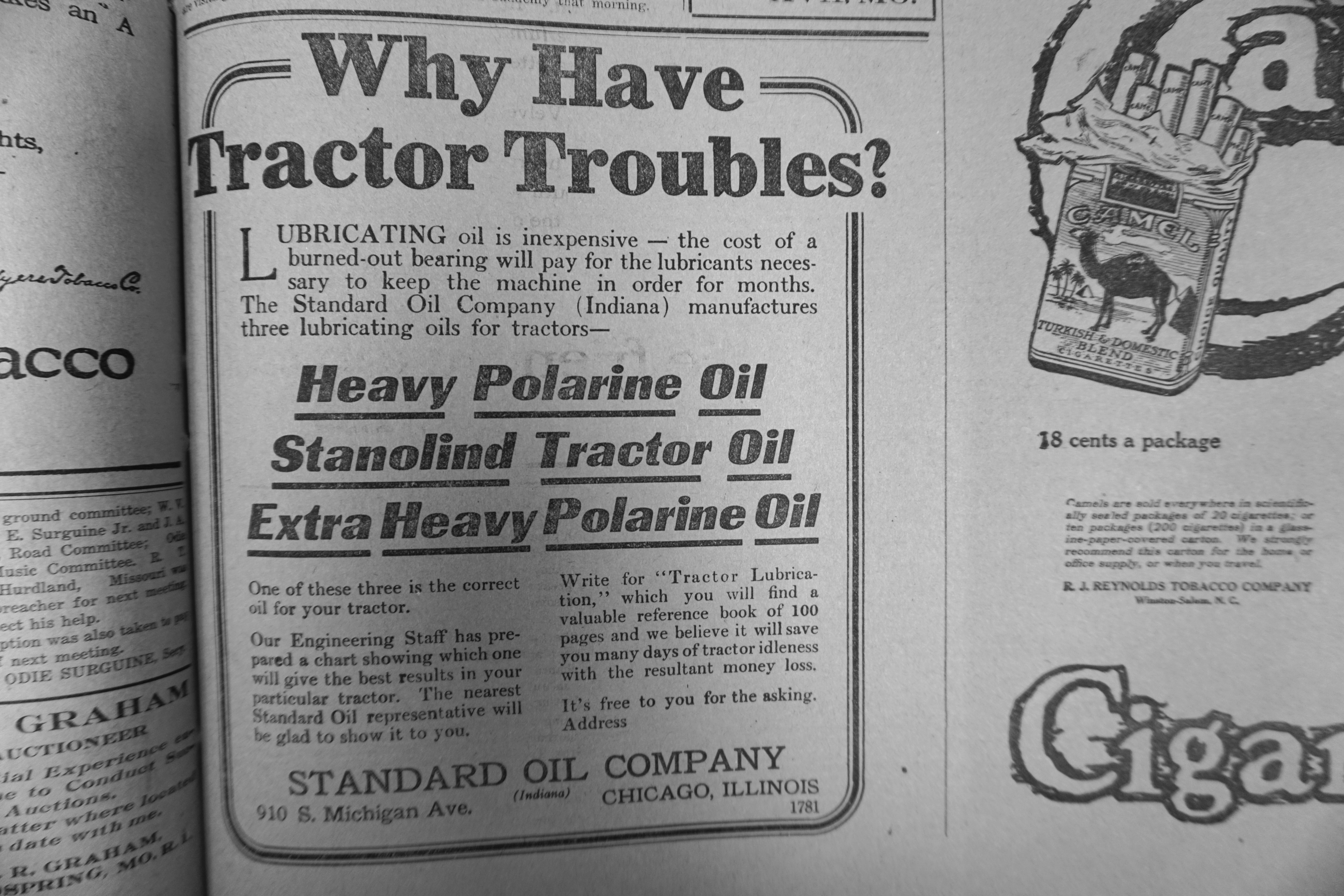