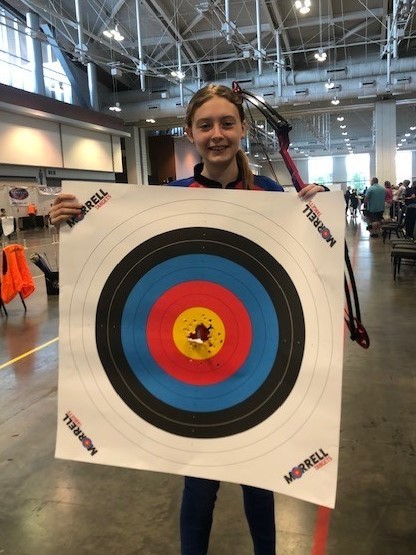 MDC congratulates all student archers who competed in the NASP Championship.

JEFFERSON CITY, Mo. – Missouri students dominated in their divisions during the National Archery in the Schools (NASP) Championship held July 25-27 in Nashville, TN. More than 2,500 top archers from the United States and Canada competed after earning a spot in their respective national tournaments to attend the NASP Championship.

Missouri archers participated through the Missouri National Archery in the Schools Program (MoNASP), which is coordinated through the Missouri Department of Conservation (MDC) in partnership with numerous schools and organizations throughout the state. MoNASP is an affiliate of NASP, and promotes education, self-esteem, and physical activity for students in grades 4-12.

Peyton Willeford from Hillsboro Junior High placed 2nd in the Middle School Boys Division with a score of 295 out of 300.

Sydney King from Trinity Lutheran School in Jefferson City took 2nd place in the Elementary School Girls Division with a score of 288.

In the NASP/IBO 3D competition, Missouri archers once again showed their prowess out of more than 1,500 archers. Students shot at life-sized North American game animal targets.

In the first ever NASP Open Tournament, which allows any team or archer from a NASP school that did not attend the National tournament to compete, a MoNASP archer walked away with the top spot.

Savannah Sadler from Norwood R-1 shot an impressive 296 out of 300 to take top honors amongst all 789 archers from across the U.S. who competed in the Open Championship.

“I was just grateful to get a chance to shoot before I have to switch schools,” said Sadler. “I like competing at the NASP tournaments because no one has any animosity towards each other and it’s like everyone is competing for the same team.”

Christopher Edwards from Norwood R-1 also shot a remarkable score of 293, which placed him 2nd in the High School Boys Division and 3rd overall.

“I’m so impressed with all of our student archers who competed in this tournament,” said MDC MoNASP Coordinator Eric Edwards. “Everyone really showed great skill and sportsmanship, and I’m excited to see what these athletes will accomplish next!”

Since NASP’s beginnings in 2002, more than 10 million students have participated in the program through 10,000 schools in 47 states and 10 countries. More than 200,000 Missouri students from more than 700 schools participate in MoNASP. To learn more, visit the MDC website at https://short.mdc.mo.gov/ZSE. 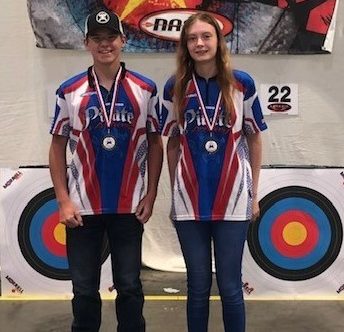 Norwood R-1 archers Christopher Edwards and Savannah Sadler pose with their medals during the 2019 NASP Open Tournament. Edwards took 2nd place overall in the tournament, while Sadler walked away with 1st place.