Before the ink was dry on the contract, construction had begun on Ava’s new school facilities that will include a middle school gymnasium and high school classrooms.

Marge Hazelton, noted artist and member of the Ava Art Museum Association, and also SMMA Docent, will have seven of her paintings being on display and for sale at the “Fine Arts Gallery” located in the Springfield Art Museum at National and Bennett, for the month of August 1991.

The children of Mr. and Mrs. Voyne Merritt are proud to announce the 40th anniversary of their parents on August 14.

Sabrina Cox, daughter of Ms. Joana Cox, of Ava, has been selected as a finalist in the 1994 Pre-Teen Missouri Scholarship and Recognition Program.

BUCKHART –– Congratulations to Mike and Darla Rodgers on their 16th wedding anniversary Aug. 4.

Mrs. Billie Taber, post president of District 17 of the American Legion Auxiliary of Ava was the installing officer of Kirby C. Wilcox, Unit 676 in Springfield on Aug. 8.  Mrs. Irene Baker, a former Ava resident was installed as president. 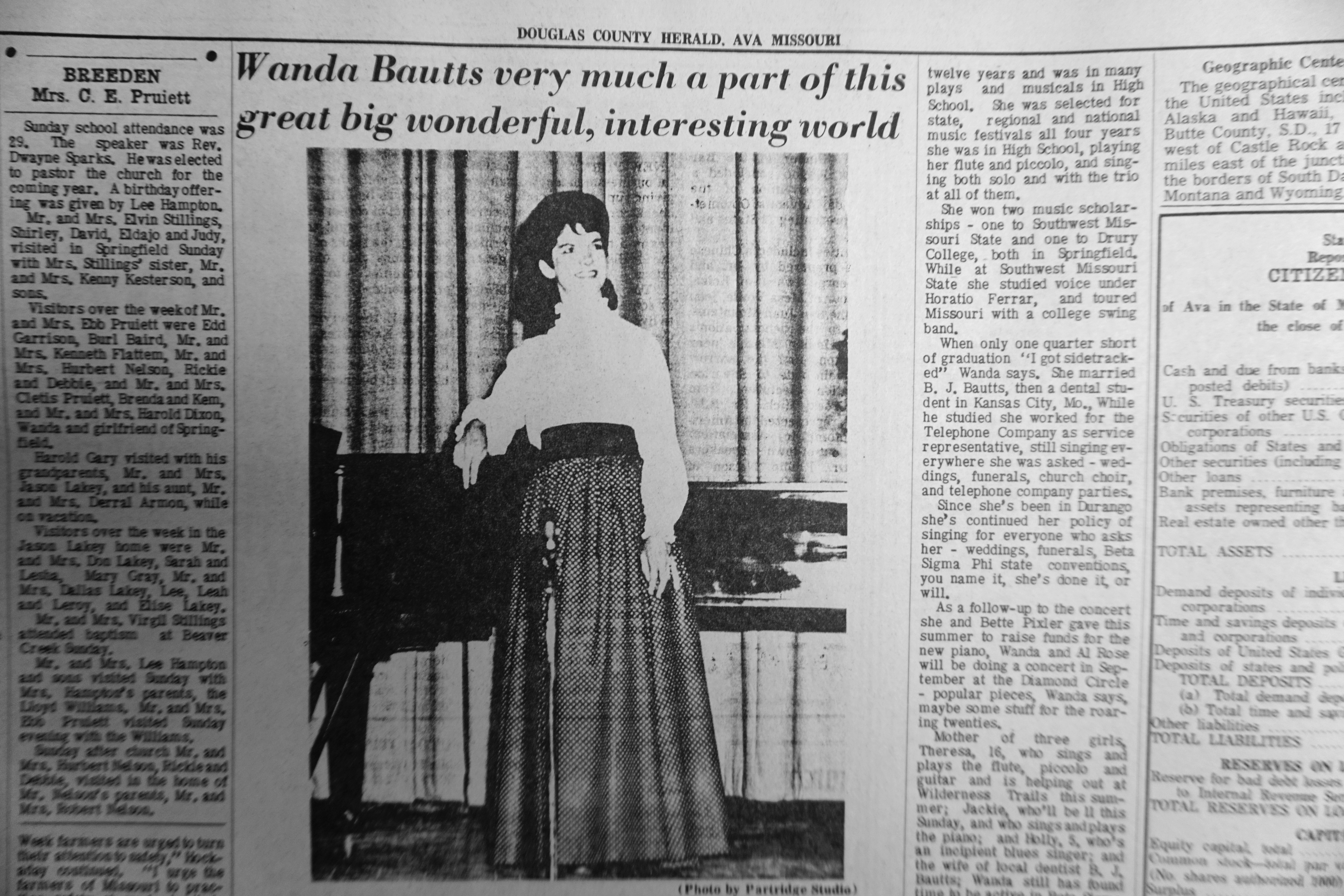 The $100,000 Ava Municipal Airport is about 90 percent completed, according to Mayor Fred O. Lethco.  Crews have cleared the land around the 3,000 foot asphalt landing strip in preparation for seeding in grass. The wind sock has been installed, and the runway is almost ready for air traffic.

Two Douglas County men were released on $2,500 bond each recently after entering a plea of innocent to charges of grand stealing at their hearing before Magistrate Gladys B. Stewart.  The men are accused of taking 34 trout valued at $68 from the Bryant Spring Trout Farm, six miles north of Ava, owned by Mr. and Mrs. Orville M. Vogt.

Theft of a boat belonging to Dr. M.L. Gentry of Ava from the Theodosia boat dock was reported to the doctor Saturday. When the boat disappeared is not known, Dr. Gentry stated.  Purchased new just recently at a cost of approximately $35,000 the boat had been used by the doctor on a single occasion for a short try-out run.

The sidewalk on the south side of the Ava Square was torn out early this week and pouring of the new sidewalk started Wednesday. Construction is expected to be started on the east side next week. 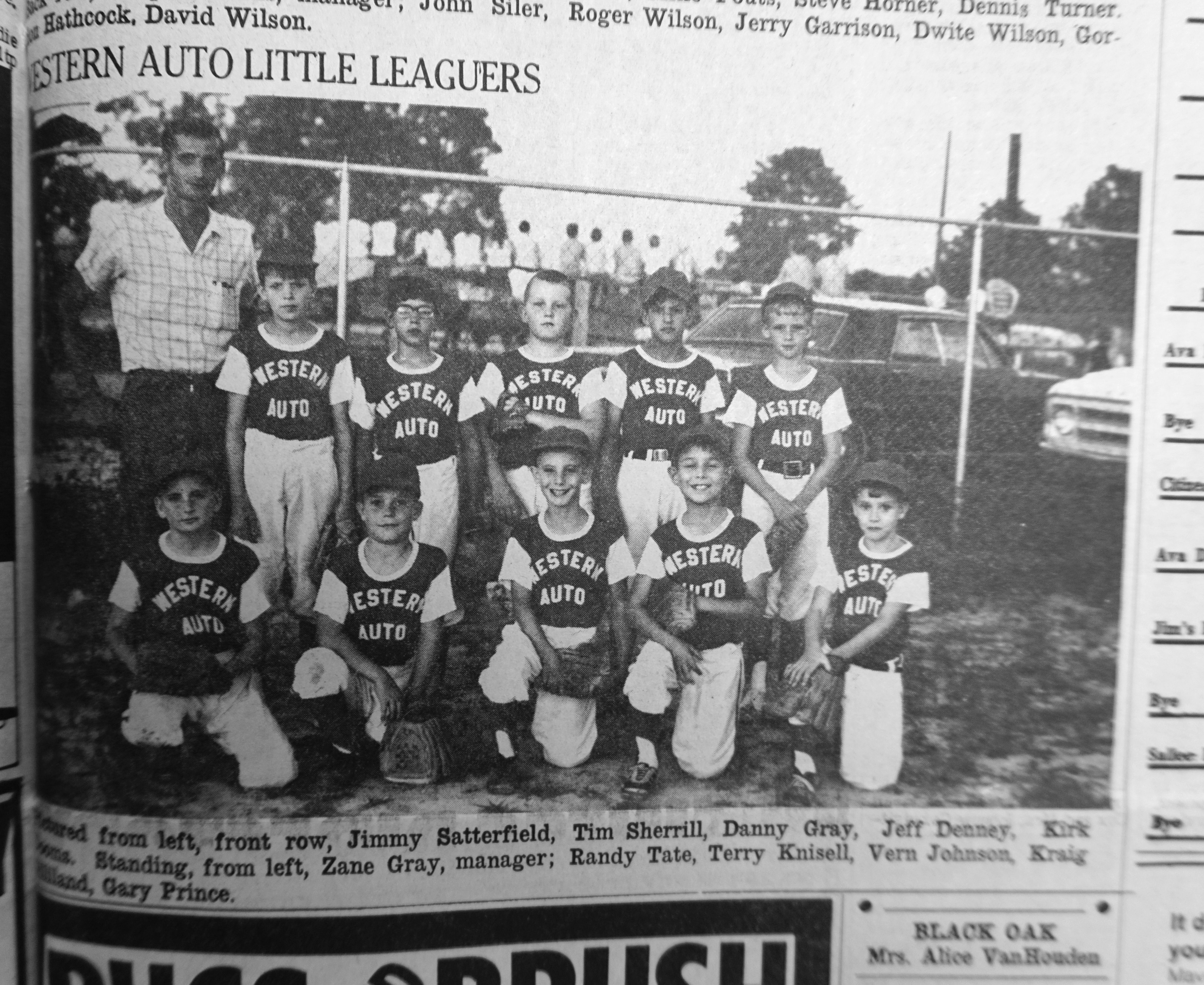 Army Sgt. Dale Duckworth arrived in Ava Friday, July 25, after concluding a one-year tour of duty in Vietnam and is now visiting in the home of his parents, Mr. and Mrs. Norman Duckworth and two sons, of Route 4.  Sgt. Duckworth was based at Lai Kai with the 314th Company of Air Traffic Control while in Vietnam. Shortly before the sergeant started the trip home he was awarded the Medal of Merit on July 22 by the Secretary of the U.S. Army for services rendered in Vietnam during the period of July 1968 to July 1969.

Miss Linda Lou Harnden, daughter of Mr. and Mrs. Glenn E. Harnden, Route 1, Ava, is one of 46 girls graduating from the Burge School of Nursing in Springfield. 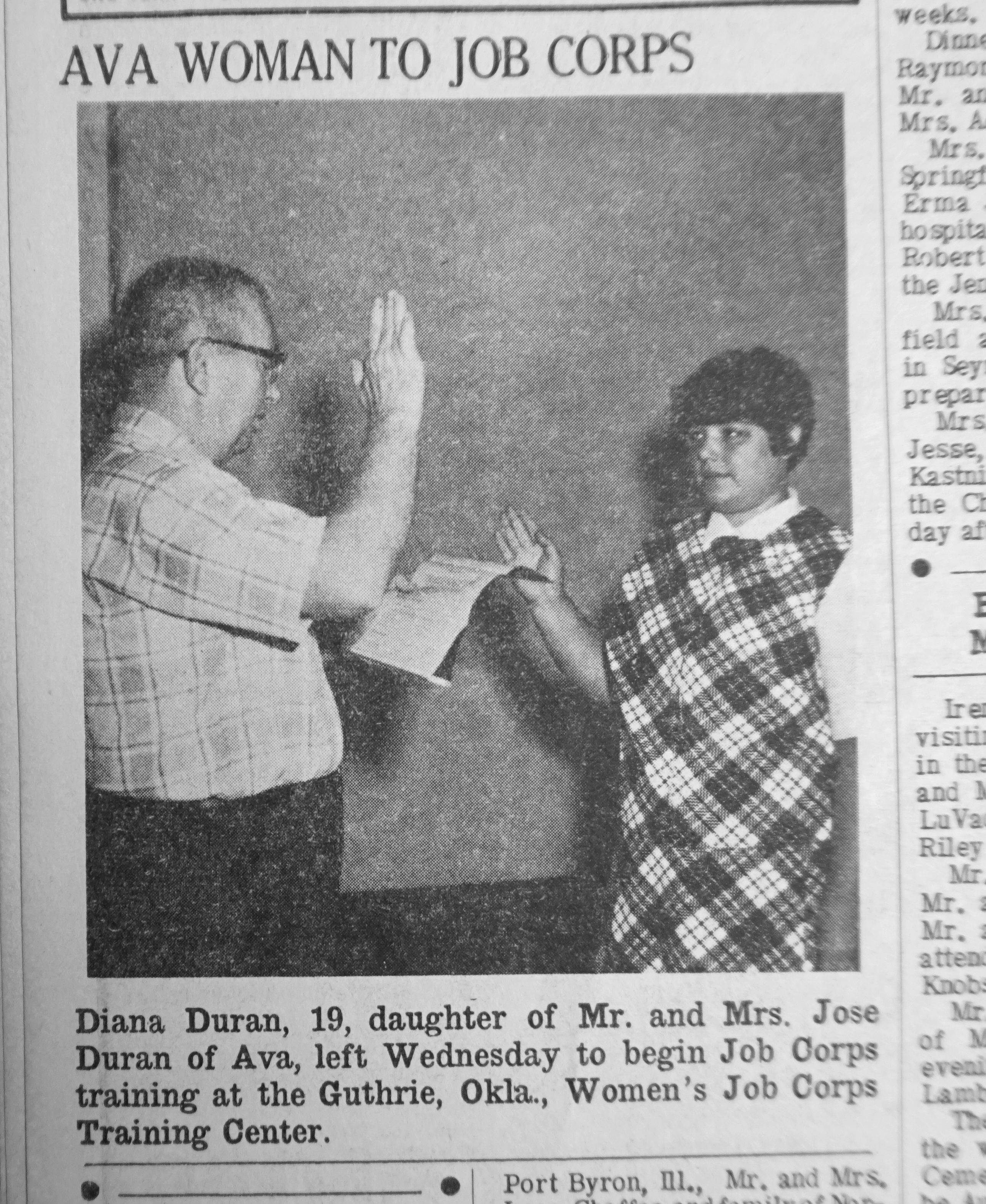 Commander William I. (Billy) Martin, USN, will be a special guest at the band concert on the square tonight. Commander Martin recently returned to the United States from the western Pacific and is resting this week at the home of his parents, Mr. and Mrs. Harry Martin.

American troops in France were 87 miles from Paris this morning after the greatest single day’s victory of the war. The Americans Wednesday captured Le Mans, St. Malo and Nantes, and raced toward Paris in a mighty offensive coordinated with Anglo-Canadian troops to the east, and forced the entire German seventh army into a trap.

Ava had its most damaging fire in many months early Saturday morning when the interior of the Sell building on the west side of the square burned.  The Ellis store occupies the ground floor, and on the second floor are the offices of Dr. J.H. Coffman, dentist; and Dr. C. E. Harlan, osteopath, and the Spic and Span beauty shop with an apartment occupied by Mrs. Lilla McCord, the owner of the beauty shop.

Homer Garrett of the Mt. Tabor community was the first to pay his 1944 taxes.  Mrs. M.J. Chaffee of Boone Township was second and Charles Dyer of Miller Township was third.

Announcements reached Ava this week telling of the birth of a daughter on Saturday, August 5, to Mr. and Mrs. Marvin Barnes of Redwood City, California.  Mrs. Barnes before her marriage was Helen Jean Daily. 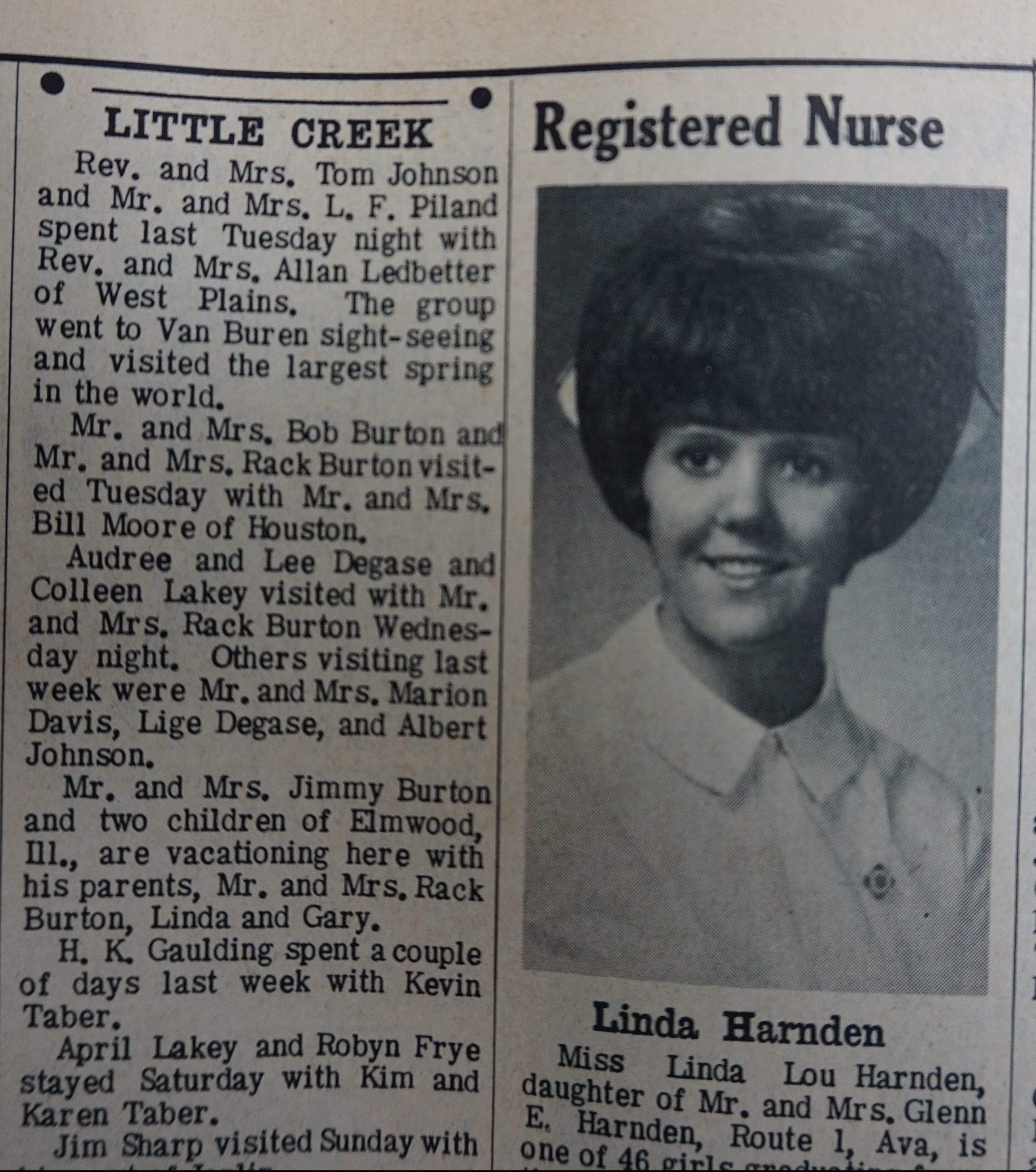 Corporal Doyle L. Irby, son of Maggie Naugle, of the Ava Hotel, Ava, has won the right to wear the wings and boots of the United States Army Paratroops.

Rupert Bridges, who has been working as part time county agent here since the resignation of Clyde Clubb, Saturday was approved as acting county agent for Douglas County to the first of the year in a meeting of the executive board of the Douglas County Extension Association.

ROCKBRIDGE –– Mr. and Mrs. Virgil Stout are the parents of a new son who made his arrival July 20.

About two months ago, Mrs. A. H. Coble put a dollar bill in their small mailbox for postage stamps.  But when the mail carrier came there was no money in the box.  No one knew where the money went.  At the time a wren had her nest in the box.  Saturday, as Mrs. Coble’s granddaughter, Corrine, was going home she found the bill quite a ways from the box. Our guess is that Mrs. Wren was too much of a lady to horde money at a time like this and she politely scattered it about.

The two canning factories in Ava are preparing to handle the banner tomato crop of this section this year.  The Hitchcock Factory has already made two short runs to handle a few loads from early patches, and the Bridwell Factory is ready at any time to start operations.

Carl Mays, the big Douglas County hurler for the Boston Red Sox, was traded last week to New York in exchange for two Yankee pitchers, Allen Russel and Robert McGraw.  Immediately after the deal was closed, president Ban Johnson of the American Association, announced the suspension of Mays for breaking his contract with the Red Sox by refusing to play.  Owners of the New York Yankees have announced that they will fight the suspension ruling to the last.

The Larissa Post Office, six miles east of Ava, was burglarized on Tuesday nigh of this week.  About $30 in stamps were taken, $4.53 in cash, and about $4.00 worth of cigarettes.  Sheriff Miller was called to Larissa as soon as it was discovered, but could not get any trace of the burglar.  Henry McFarlin who runs the store and post office stated that a stranger who he described as being between 24 and 30 years old, slender, and wearing a dark coat and trousers, was in the store about the middle of the afternoon Tuesday. Suspicion seems to be centered on him because of his mysterious disappearance.   Mr. McFarlin is offering a reward of $50.00 for the arrest and conviction of the guilty person.

Five milk cows belonging to Jesse Wallace of Bryant, were killed by a bolt of lightening on Wednesday of last week.

The Ava Motor Company on Jefferson Street was sold last week to E. Q. Johnson.  Cole Coffeen, former owner of the property, will continue to assist with the business for the present.  D. J. Mankin has also been secured to assist in the mechanical department.

W. E. Eslick, a young man of Ava, was on trial Tuesday on the charge of rape. He was found guilty of common assault and fined $50 and costs.  The case was taken to the Springfield Court of Appeals on an appeal.  Eslick is the son of Grant Eslick, former sheriff of Douglas County.

It is reported that Henry Klineline is losing calves with Blackleg.

Jos. Baker, Richard Surguine and J. R. Ridenour are the owners of a new garage opened up in the post office building last week.

TOPAZ –– The “toot” of tourist cars are heard signaling along our road. 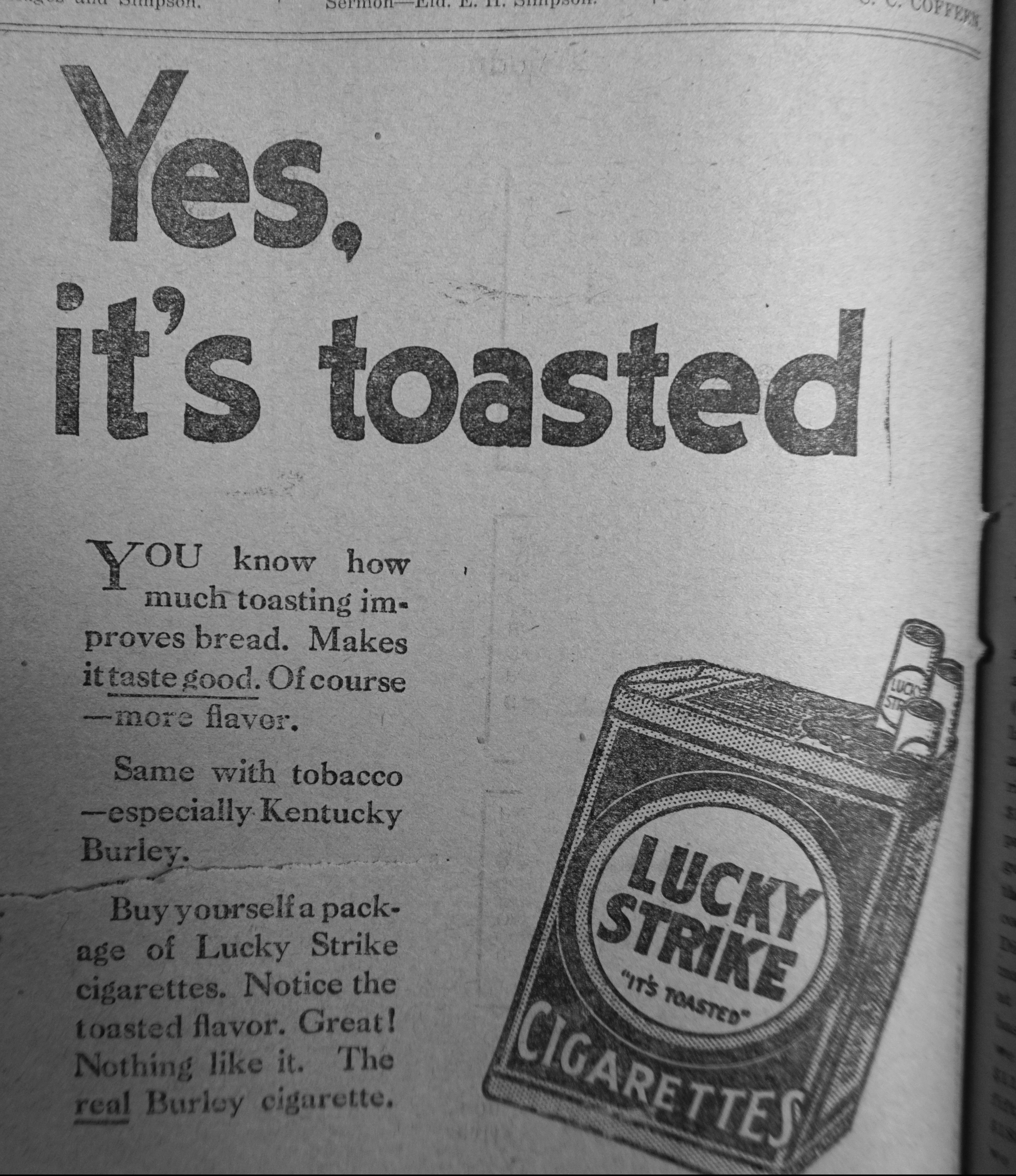 The Small Pox scare which struck this place last Saturday has partially subsided, as it is reported to be only a case of fever.

A vast tract of land has been purchased in Arkansas, with a view to colonizing Slavs in it.

The state industrial home for girls in Chillicothe is crowded full.

The Neosho School Board has added a two year course in Latin.

Reform is a medicine that every statesman wants some other fellow to take.

Stove wood is selling for 75¢ a cord delivered, in West Plains.

Robert Broeker has been awarded the contract for whiskey for the Nevada Insane asylum.

A Nodaway County man in his anxiety to smoke out a bumblebees’ nest, burned up 42 apple trees and a stack of hay.

Elijah Lee of Louisiana, a colored man, has had an operation performed for cataract and his sight restored after ten years of blindness.

About 16 percent of the population of Missouri vote at presidential elections.  At other general elections about 17 percent can be counted on.

The Missouri horse “Rowdy Joe” has an eccentric disposition and has to be carefully gone over with a trace chain before he will behave decently in a race.

Some boys in Dade County who undertook to annoy a party of young ladies with a modification of the “horse fiddle” were driven off with revolvers.

The man that does not believe that two heads are better than one, is the father of newborn twins.

Jack Dempsey, the ex-nonpareil, and Australian Billy McCarthy will fight before the Auditorium Athletic Club at New Orleans on August 25.

A Gordon setter belonging to Malachi Moon of Moniteau County is a wretched inebriate, a perfect slave to lager beer.

In a quiet but nonetheless energetic manner, the Memphis people have for three years past been pushing the work of practically rebuilding their main line of road between Kansas City and Memphis.  With the close of the present month the work will be practically completed, and the permanent roadway is now, beyond doubt, in condition to compare favorably with the older lines in the east.

Aaron Henson of Boone Township was in town the first of the week on business with the Court.

It doesn’t matter much about finding out the world’s round, if you are sure the people are square.

James Summerville of Thornfield, Ozark County, was in town on Wednesday.

On Tuesday night, the young people met at the Church and organized an M. E. Aid Society. This society meets on the first and third Fridays in each month.

If you are an idealist never go behind the scenes of theater nor into the serving room of a restaurant.