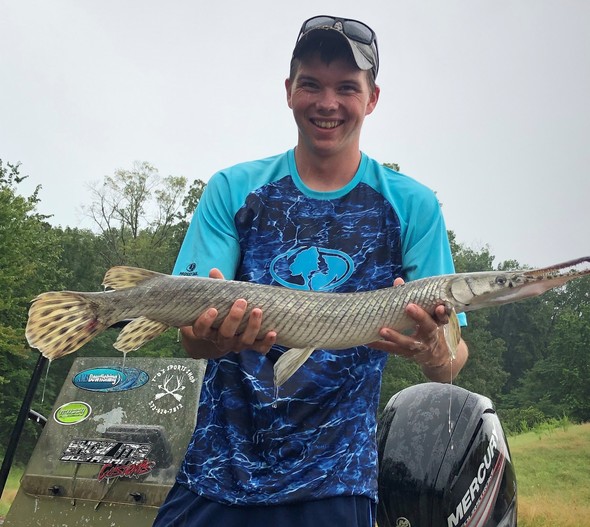 JEFFERSON CITY, Mo. – The Missouri Department of Conservation (MDC) announces that Mitchell Dering of Wappapello is the new state-record-holder for spotted gar. Dering caught a 6-pound, 2-ounce fish on the St. Francis River July 5 using the pole-and-line method. The previous record was a 6-pound, 0-ounce fish caught in 2005 in Boeuf Creek.

“I was actually out catfishing that day,” said Dering. “I already caught one catfish, and then threw my line back in. A little later, my friends noticed the fish jumping out of the water.”

Dering’s catch that day was his second chance at a state record.

“Two years ago, I caught a record gar on the St. Francis,” Dering explained. “But I ended up turning it loose. So, I was happy to get this catch and have it weighed by a game warden.”

The fish’s weight was verified on an MDC scale in Wayne County.

Dering caught the spotted gar using live blue gill as bait. The fish is the seventh state-record fish caught in 2019.

Much like the spotted gar he reeled in two years ago, Dering was going to release this year’s catch, but fate had other plans.

“It died before I weighed it, so I have plans to mount it,” he said.

Longnose, shortnose, alligator gar, and spotted gar are considered nongame fish in Missouri and may be caught and kept. Learn more at https://huntfish.mdc.mo.gov/fishing/species/gar.