The Ava Recycling Center recently received $2,000 toward the purchase of a new glass crushing machine from White River Valley Electric’s Operation Round Up.

Five-year-old Alisha Caples, has been selected as a state finalist in the American Co-Ed Pageant that will be held in Kansas City on Sept. 4.

Everett Ray Holman, son of Raymond Russell and Lois Holman of Ava, received a bachelor of science degree during commencement services at Southwest Missouri State University on May 13, 1994. Everett is a 1989 graduate of Ava High School.

Alan Kennedy of Columbia and his brother Cary Kennedy of Boonville, Mo., were in Ava last weekend to visit their mother, Betty Kennedy.

For a birthday gift Sherry Sims of Louisville, Ky., gave her mother, Faye Sims of Ava, a vacation in Hawaii.  The two ladies were there ten days.

George Guthery celebrated his 94th birthday Saturday when family and friends gathered at the fairground with a big birthday cake and lots of good food.

An open house celebration will be held August 7 at the Ava Community Center in honor of the 50th wedding anniversary of Robert and Elizabeth Stonerock.  The couple were married August 3, 1944, at Phillipsburg, Kansas.

Three young men from east Douglas County were bound over for trial in circuit court after a preliminary hearing Wednesday on charges of cattle theft.  The three men are accused of taking 11 head of cattle from the Alex Ray Cook farm near Cabool Sunday night.

It takes a lot of energy to keep 200 youngsters occupied but Ava’s new coach Carl Roebuck seems to have an endless supply when it comes to baseball for young boys and girls.

Mr. and Mrs. Glen Frye entertained with a watermelon party at their home, south of Ava, Tuesday night, July 18, when they honored members of the Western Auto Little League Baseball Team and manager, Zane Gray. The Little League team had won a league game from the Richard Brothers Team, preceding the party.

Chadwick, the Copperhead Capital of the World, will see residents and visitors stepping high Saturday. That’s the day for the annual Snake Hunt and Barbecue sponsored by the Chadwick Cemetery, INc., which advertises that it is “not responsible for snakebite or accident.”  Through the day, the woods will be combed for snakes and at 9 p.m. the day’s catch will be judged.  A prize of $25 will be offered for the first live rattlesnake over four feet long. The largest live copperhead of the hunt will be worth $10 to the captor, and $3 will be given to the hunter who brings in the most live poisonous snakes of the hunt. 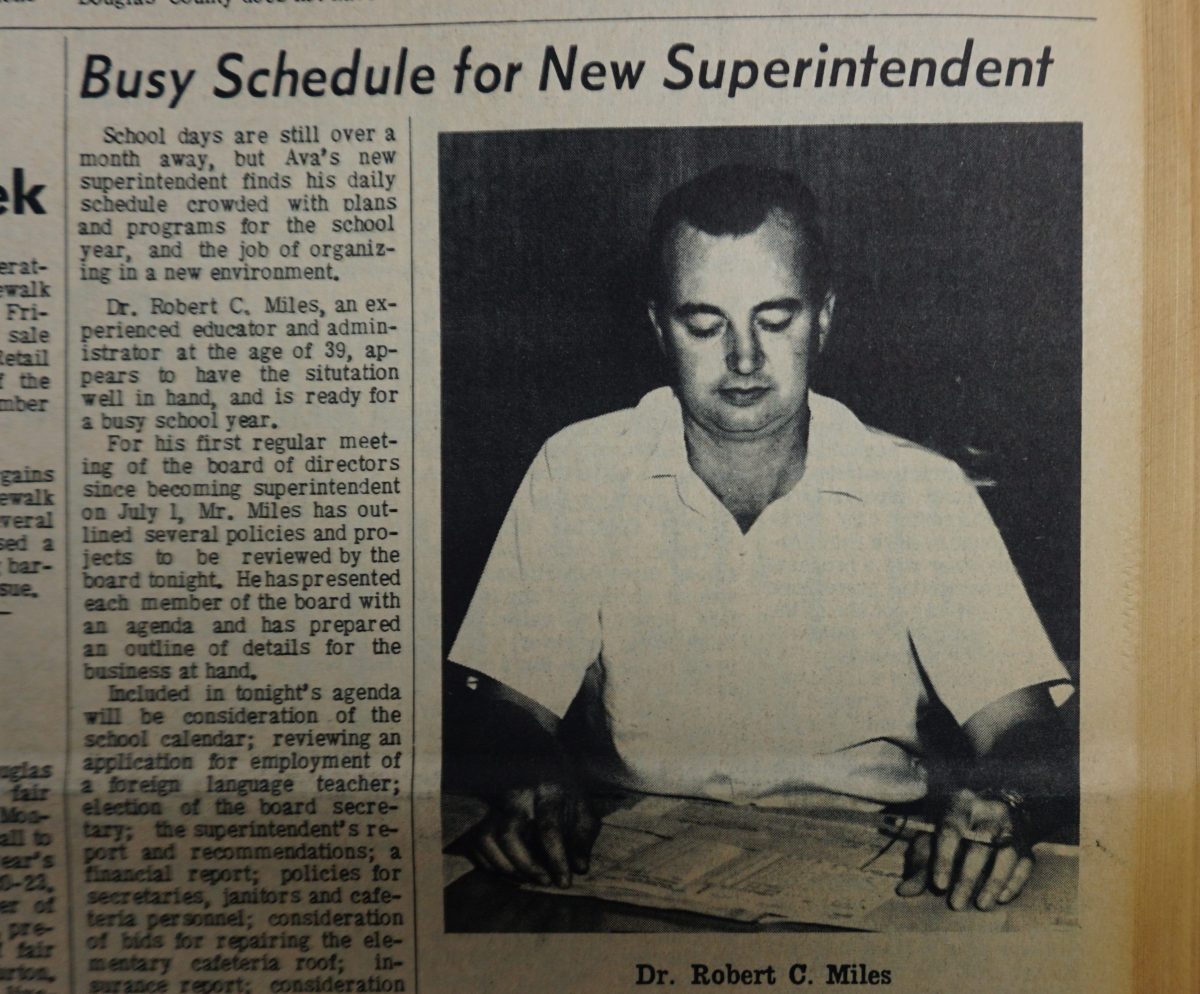 The former Miss Wanda Lou Hunt of Ava, now Mrs. B.J. Bautts of Durango, Colo., who was an outstanding singer and musician while a student in the Ava school system, continues to carry on her singing career as the wife of Dr. Bautts, dentist, and as the mother of three daughters.

Rev. and Mrs. C.B. Maggard of Ava observed their 60th wedding anniversary Sunday with a family gathering at the fairgrounds in Ava.

The Southwest Missouri State College Concert Chorals, now touring Europe, placed third last week in the International Musical in Liangollen, North Wales.  Miss Marjorie Robertson, daughter of Mr. and Mrs. Clifford Robertson, Ava, is a member of the Chorale and her sister, Miss Janice Robertson is a guest traveler on the trip.

MT. TABOR –– Randy Duckworth of Ava spent Thursday and Friday in Springfield at SMS College where he registered for the fall semester. He is the son of Mr. and Mrs. Norman Duckworth.

La Verne Crain, daughter of Mr. and Mrs. Rube Graham of Ava, recently graduated from a course in interior decorating from the American School of Chicago.

Dr. and Mrs. Douglas Hays and sons, Troy and Matthew, entertained at their home Sunday night, following evening church services at Ava Church of Christ, as a farewell compliment to Mr. and Mrs. Virgil Ferrell and daughters.

If fewer in-laws behaved like outlaws, there’d be more harmony in many families. 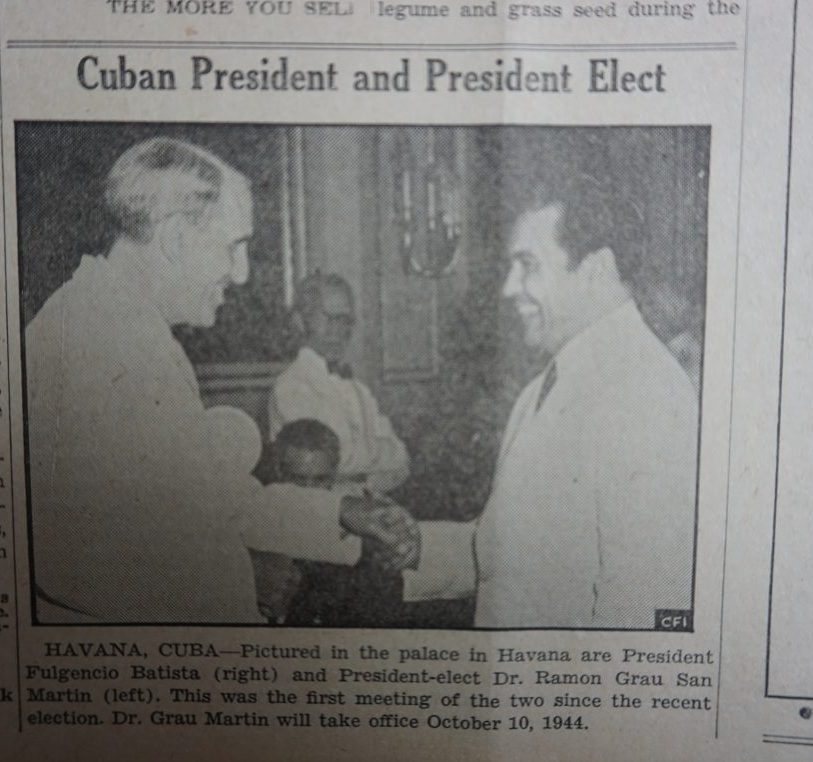 U.S. tank columns shattered the Germans’ west Normandy line Thursday last week and since then the Nazis have been beaten into further retreat.

J.E. Curry, Herald editor, appeared to have the republican nomination for 19th district state senator on a tabulation of unofficial but almost complete reports from the eight counties in the district. 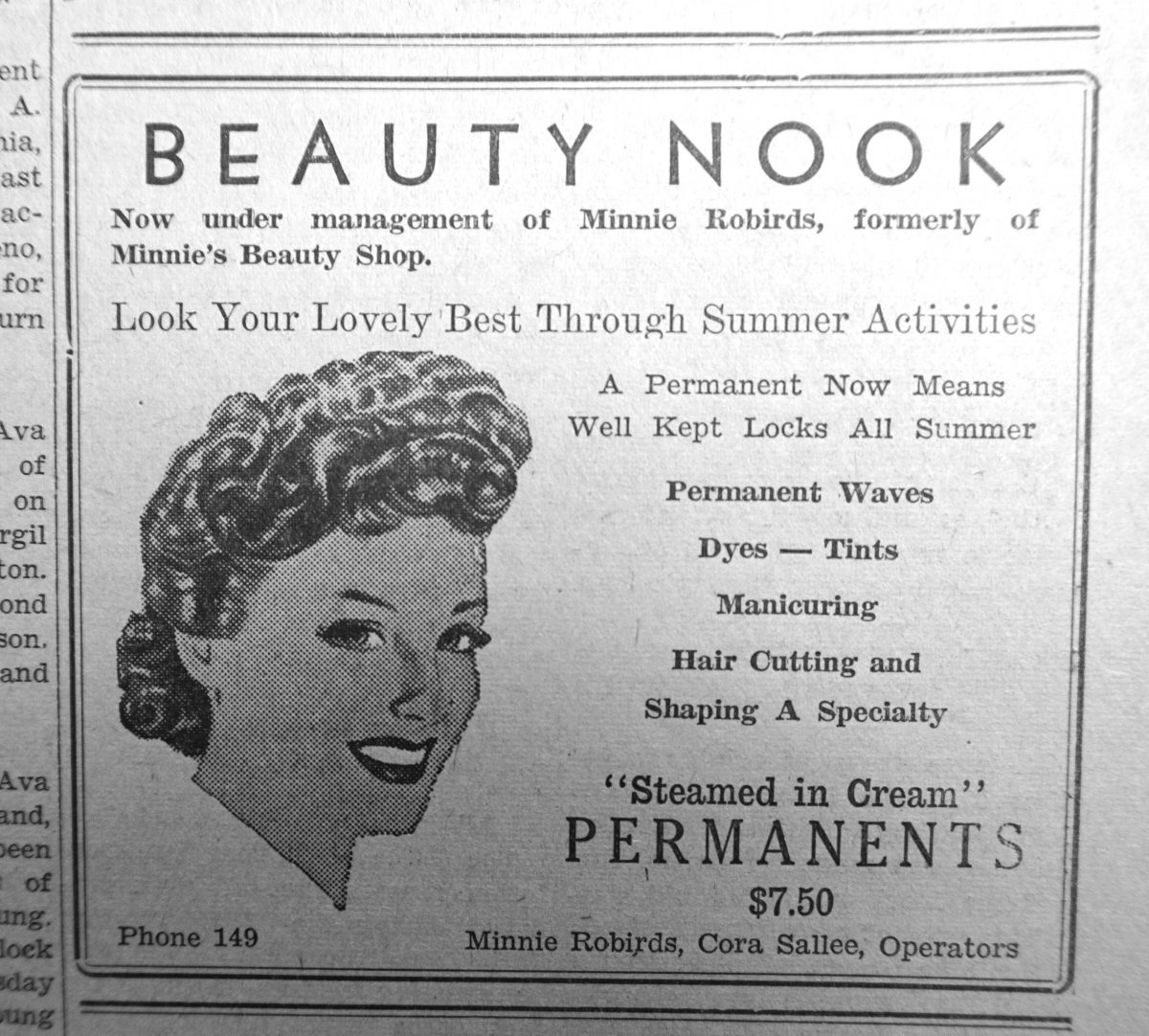 The next governor of Missouri will be a Lebanon man –– either Jean Paul Bradshaw, republican, or State Senator Phil M. Donnelly, democrat.

Mrs. Wilborn Dewhirst this week resigned her position on the Ava school faculty to stay at Clinton, Tennessee, where her husband is employed.  Mrs. Dewhirst also has been working there since May 29.

(Somewhere in England) –– Corporal Warren G. Mathes who left Cross Roads, Missouri on June 3, 1943, is now attending a British radio school under the supervision of the Signal Corps of the Air Service Command in Britain.   Corporal Mathes is the husband of Mrs. Georgia Mathes of Cross Roads, Missouri.

Mrs. Jim Embrey entertained a few guests in her home Wednesday afternoon last week in compliment to her daughter, Maudena, who was celebrating her ninth birthday anniversary.

Fred Ellis who recently enrolled in the School of the Ozarks, near Hollister, came to Ava Friday for a weekend visit with his mother, Mrs. R.L. Ellis, and his brothers, Billy, Robert and Frank Lee.  Fred returned to school Monday morning.

WASOLA –– Arthur Daniel who was badly wounded in the foot by a gunshot while out hunting a few weeks ago came last week from the U.S. Naval Hospital in Memphis for a visit at his home here.

ROME –– Clarence Blakey returned home Sunday from Kansas City where he has been working for the past five weeks.

The United States is facing a critical transportation overload unless passenger travel is cut substantially, the office of defense transportation warns.

It is not generally known that the world’s greatest oil wells today are located in Mexico. One well that was producing 50,000 barrels of petroleum daily for eight years has been closed by flooding.

After two different bond elections had been held and bonds authorized, later to be declared invalid because the assessed property valuation in the district was too low, patriotic citizens of Hartville decided to waste no  more effort at voting bonds and signed a note for $20,000 to provide funds for the erection of a new school building for the town. The money will be borrowed from Hartville banks.

The Annual picnic at Brown’s Cave on Bryant, about 18 miles southeast of Ava, will be held this year on August 22-23.

Internal revenue collectors are making the rounds through Missouri looking after business for Uncle Sam. One of them was in Ava this week and collected $10.00 each off of several jitneys. Anyone hauling passengers for pay is liable for the payment of such taxes.  Persons operating jitneys and who have not paid the tax should get in touch with Col. E. M. Harber, Revenue Collector, Kansas City, Mo., and pay up before costs are added.

A ten and one-half pound son arrived at the home of Mr. and Mrs. C. P. Anderson of Granada, on Monday of this week.  Mother and babe are doing nicely, and C. P. seems very much elated over the arrival of his fourth Republican voter.

GRANADA ITEMS –– The “blackberry epidemic” seems to be about over and a few are getting their hands again in normal condition.

We are commanded not to envy but how can we help it when we learn of the “fish catch” by Messrs. Geo. Hood, Grandpa Ellison, Oscar and Bill Robertson, Guy and Arthur Bridges. 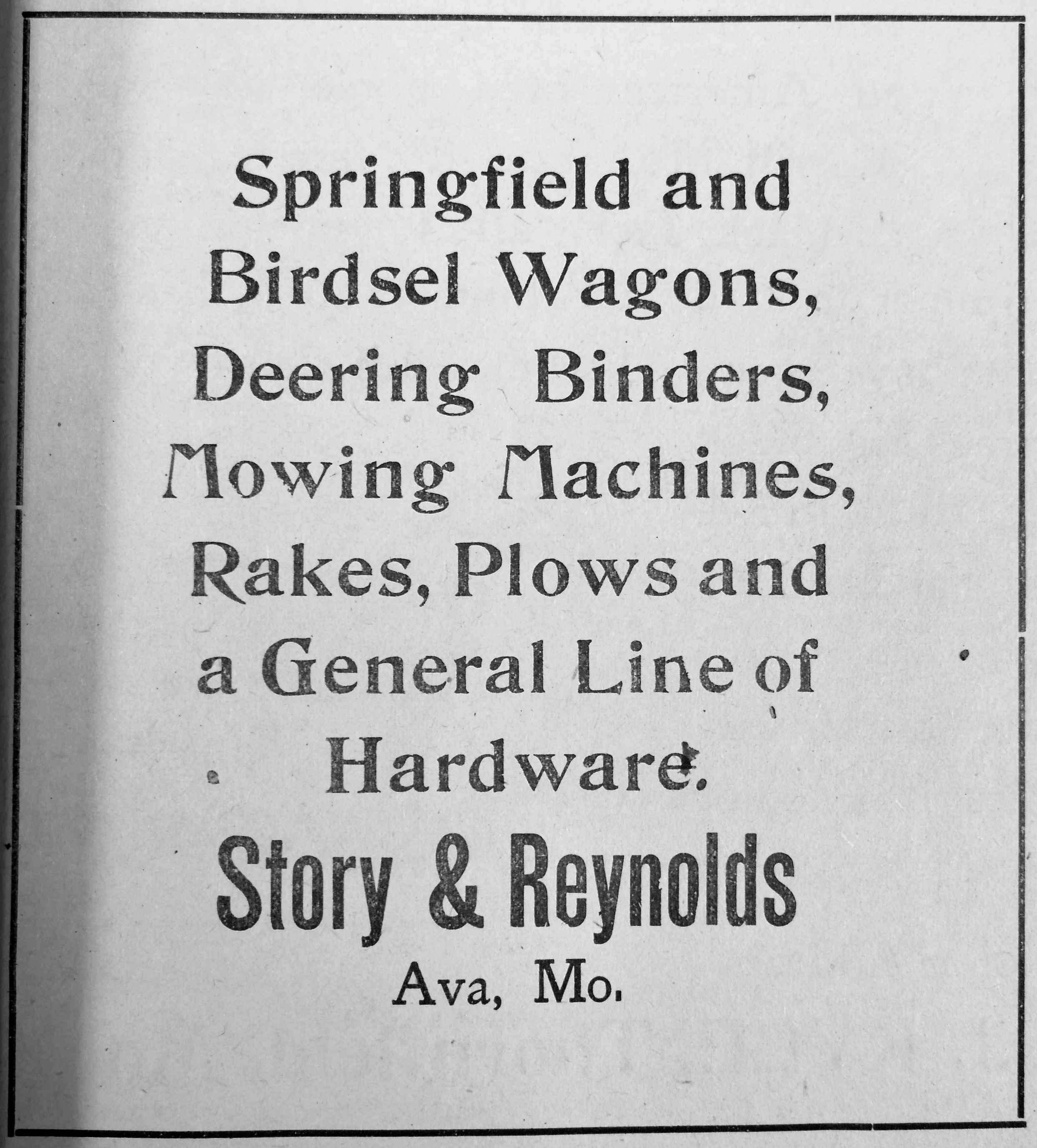 PACIFIC, Mo. –– Frisco passenger train No. 3, which left St. Louis Thursday at 8:25 p.m. with Conductor Mansfield, and Engineer Weckerly, was attacked by robbers about one mile west of Valley Park.  No money was secured.  The train, after the shooting at Valley Park, met with another mishap, which is regarded as part of a pre-arranged plan to wreck and rob the train.

Wind wrecked a circus tent at Joliet, Illinois.  An anaconda escaped and is still at large.

Twenty thousand Manchurian Chinese troops have crossed the Korean frontier and are marching upon Seoul.

Deserters from the Chinese Army who have been caught will be decapitated.

The Western Zinc Company of Joplin, Mo., has gone into the hands of receivers.

Ex-Senator Ingalls has accepted an invitation to address the meeting of the Missouri Republicans state convention at Excelsior Springs.

The Armour packing company at Kansas City, Mo., has received an order for 500,000 pounds of canned corned beef from the Japanese government.

Telegraph wires on the east side of the Missouri River from Atchison to St. Joseph are being torn down and will be put up on the west side on account of changes in the channel.

The notorious Cook gang were surrounded in the house of Bill Province, 14 miles west of Sapulpa, Ok., yesterday morning by United States marshals, and a desperate battle ensued, which resulted in the capture of Add Berryhill and the killing of Lon Gordon and Henry Munson of the gang. The three remaining desperadoes made their escape.  About 200 shots were fired.

The Douglas County Normal School and Business Institute will open September 3rd, with able instructors and better facilities than ever before.  If you want to attend a thorough practical, cheap school, with Common School, Normal, Didactic, Commercial, Art and Music Courses, investigate the advantages of the Ava Normal.  Edwin Lewis, B.S., Pc. B., Principal.   Etcyl Blair, Secretary.

The preliminary trial of J. W. Tarflinger of Clay Township on a charge of killing S. C. Parker was concluded on Friday evening and resulted in the discharge of the prisoner by Esquire Snyder before whom the case was tried.

A burglar in New York was detected by his hat falling from his head and striking a passing policeman.

Evan Adams of Mount Pleasant, N.J., who died the other day, had 187 housekeepers during the ten years previous to his death. They generally left after two or three days. He was finally blacklisted by the employment agencies of Philadelphia, and did business with the agencies of New York. The climax came with the 187th woman who drove him up a tree with an ax.

A cornet player who cannot attend the band meeting should send a sub-to-toot.