The reunion idea was first born in 2017 during an Ava – Mountain Grove championship game when   two classmates, Michael Caudill and Chad Williams, began talking about hosting their own graduating class reunion.

As reunion talk continued, Chad and his sister, Jennifer Williams Lamb, began to research Guinness records to see if any standing achievements were obtainable.  The event that caught their attention was a record for assembling the most consecutive high school graduating classes.  The school that currently held the record had only rallied together 41 classes for an all-class reunion record.

Chad and his sister felt certain the Ava Bear spirit could beat that number.  And it appears they did.

The rest of the story may soon be recorded as a special moment in history for Ava R-I.

The 2019 All-Class Reunion held in Ava on Saturday, July 27, is deemed to have easily exceeded the standing record of 41 graduating classes coming together.   Making the record-breaking accomplishment look easy, Ava documented and recorded 62 consecutive years of graduating classes.

Competing for the record, Ava classmates spanned the football field with alumni from the Class of 1944 to the Class of 2019, and according to organizers, approximately 500 people attended the event.  Many were Ava alumni, others were spectators, family members, and friends.

The rules for making a valid run for the title had to be met and documented.   Ava had to have at least 42 consecutive classes on the field, with a representative from each class officially documented as an Ava R-I graduate.  The graduation year also had to be verified.  According to event organizers, official transcripts were provided by Ava R-I Schools, with class documentation ranging from 1935 to 2019.

To fulfill record requirements, the ‘reunion group’ had to remain on the field, all-together, for at least five minutes.  Larry Silvey and Chirs Degase served as official time keepers, and blasts from an air-horn marked the start and finish.

During the event, four awards were presented acknowledging the following categories:

• Most generations of graduates: The Aborn Family;

According to Chad Williams, Guinness has already approved the preliminary documentation, however, an official passing of the baton will not be announced for another 6 to 8 weeks, as all the documentation must be officially verified.

Organizers admit the planning and coordination of the event was extensive, as the notification process took approximately seven months.

The event was held at the Ava High School football field. 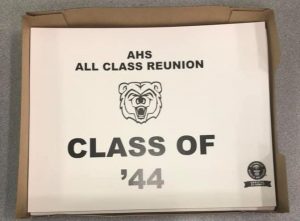 Photo by Chad Williams Each class was designated with an 8×10-inch sign marking the year. The one above is for the graduating Class of 1944.