Cleo Cole of rural Norwood was in Ava last Saturday to present pictures of her grandparents, Richard and Elizabeth (Marler) Hodge, to the Douglas County Museum.  “Pap” and “Ma” as they were called, homesteaded 200 acres north of Denlow in Cass Township in 1884 and lived all their lives in Douglas County.  Mr. Hodge served as justice of the peace, president of the school board, deputy sheriff, postmaster, constable, tax collector and jailer from time to time.  When he was a jailer, he kept his prisoners in the corn crib.

The installation of a new water line on S.E. 8th Street is just about complete.

Relatives and friends gathered at the home of Mr. and Mrs. Tommy Medlock south of Gentryville on July 2, to help Tommy Medlock celebrate his 90th birthday, an outdoor basket dinner was held at noon.

Jerry Lumpe, former baseball all-star and a member of the board of directors of Douglas County National Bank, Ava, was inducted into the John Q. Hammons Missouri Sports Hall of Fame in Springfield on July 18.

Delene Allen of Ava, has been awarded a Child Development Associate (CDA) Credential in recognition of outstanding work with young children.  Mrs. Allen is employed as a Lead Education Technician by the Leighton Day Care Center in Wuerzberg, German.

FOX CREEK (Ireta Tate) –– To our family Ava has never been quite the same since Dr. Marvin closed his office and retired.  He is now gone but leaves many memories, and an interesting book could be written on Dr. Gentry’s life.

Over 40 towns in Arkansas, Oklahoma and Missouri were represented in the Ava Saddle Club’s 15th annual horse show held last Thursday and Friday nights at the fairgrounds here, according to Mrs. Trellis Dewhirst, secretary.

Leonard Owens of Ava has purchased the interest of Russell Lathrop in the Owens and Lathrop Service Station on north Jefferson, it was announced this week.  The firm will maintain its 24-hour service, and will be known as Owens’ Service Station.

Charlie Herrell, son of Mr. and Mrs. Charlie Herrell, Route 4, Ava, was promoted to Army sergeant June 4 in Vietnam where he is serving with the 4th Infantry Division as a squad leader. 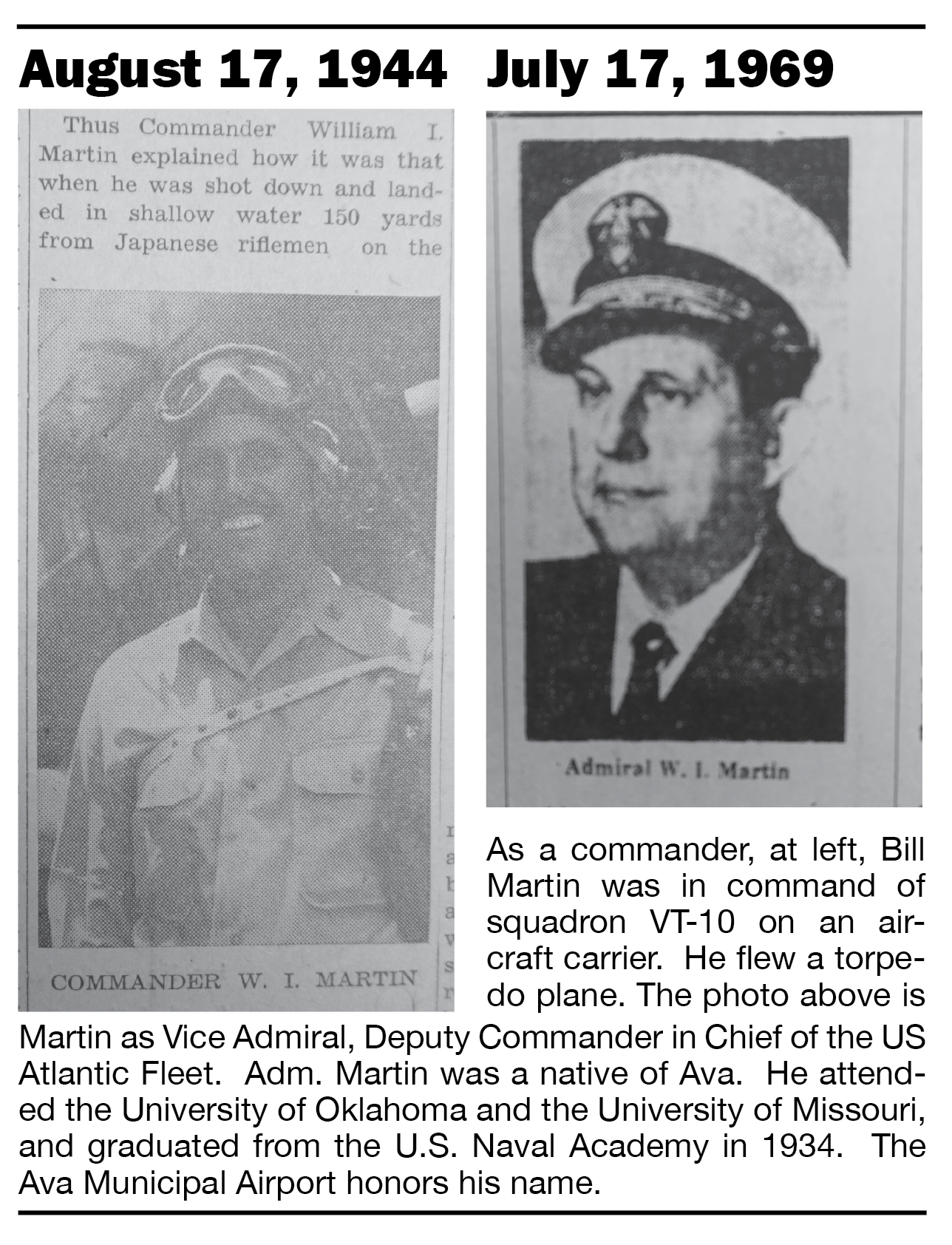 Elza Ludwig of Ava observed his 77th birthday July 8 at his home.

Mr. and Mrs. Ken Morett, former owners of the Bryant Trout Farm north of Ava, will open a Thermo Plastic Forming plant in Mansfield.  The business will be located in the Wayne Tarbutton Building on West Commercial, formerly occupied by the Chrysler-Plymouth Agency.  The plant will produce three dimensional signs of all types and other displays.

NORFOLK, Va. –– The Navy would be hard-pressed to put a reliable force to sea if a major conflict erupted, Vice-Admiral William I. Martin, deputy commander in chief of the U.S. Atlantic fleet, said recently in an interview at fleet headquarters here.  “We have the forces to meet current needs in Vietnam and other trouble spots, but if some real contingency arose, we would find ourselves hard-pressed,” Martin said.

Cattle thefts are on the increase.  Cattle stealing has cost state cattlemen thousands of dollars this past year as reports continue to pour into the Cattlemen’s Association office.

Old money may be dirty, but if you have enough of it you can buy an awful lot of soap with which to tidy it up.

The plant foreman says attention to production would increase dramatically if he could get the gals out of tight slacks and into loose overalls.

MT. TABOR –– A birthday party was given Thursday night in the home of Mr. and Mrs Bob Turner in honor of their daughter, Brenda, who was celebrating her 10th birthday. 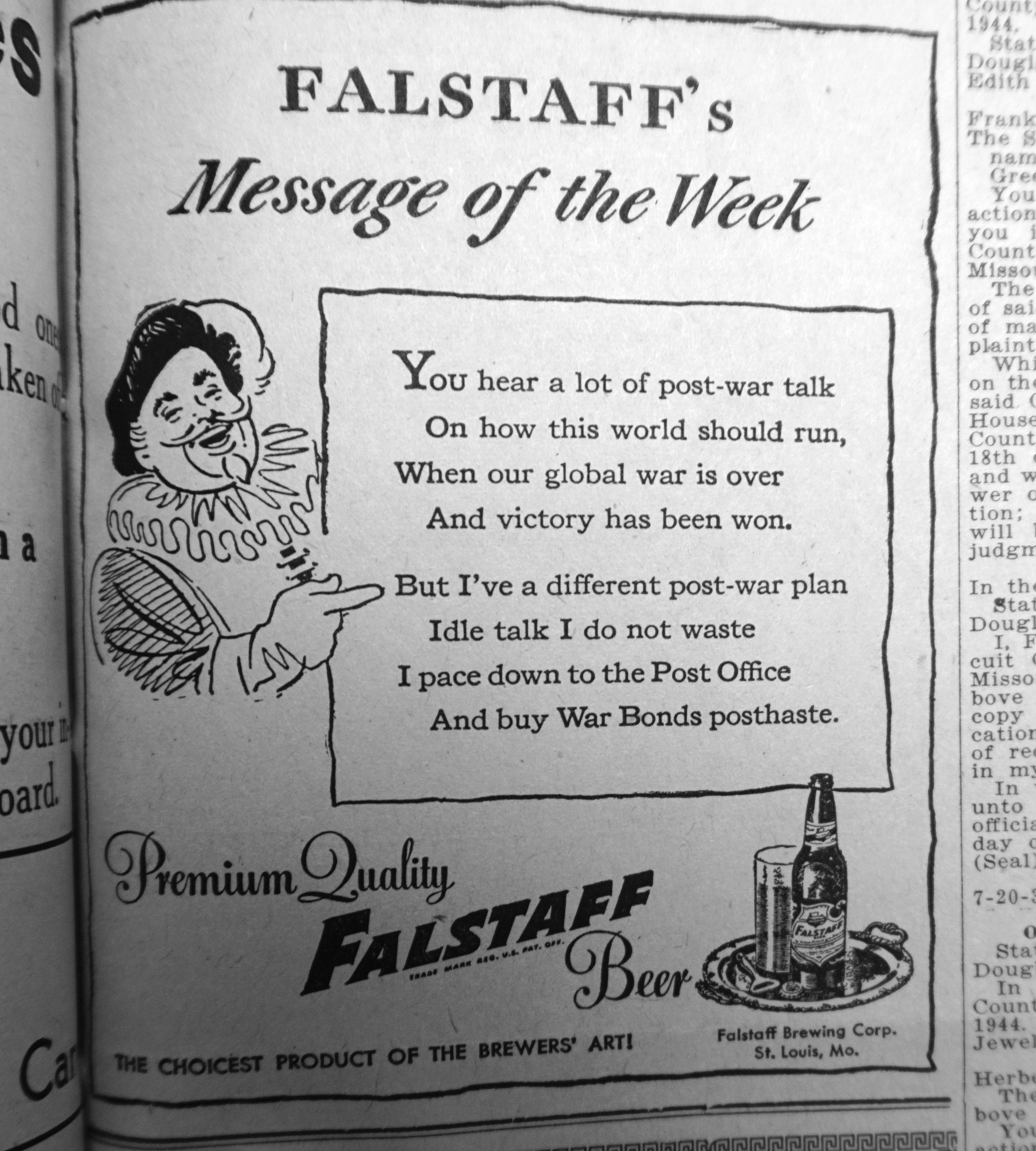 Adolf Hitler, narrowly escaping death by a bomb Thursday last week, has conducted a blood purge of high army officers, charging the attempted assassination to a “clique of mad generals.”  Hitler told the world by radio that “an extremely small clique of ambitious, unscrupulous, and at the same time foolish, criminally stupid officers hatched a plot to remove me, together with me, virtually to exterminate the staff of the German high command.

Corporal Clarence Gray, son of Mrs. Bessie Gray of Route 4, Ava, Missouri has recently been awarded his first combat star for active participation in a combat zone. As a truck driver assigned to the Quartermaster Service of an Advance Base Service Command on Bougainville, Solomon Islands, he has seen plenty of action and excitement in the past six months while hauling supplies and ammunition to the men on the front lines, many times under actual enemy shellfire. 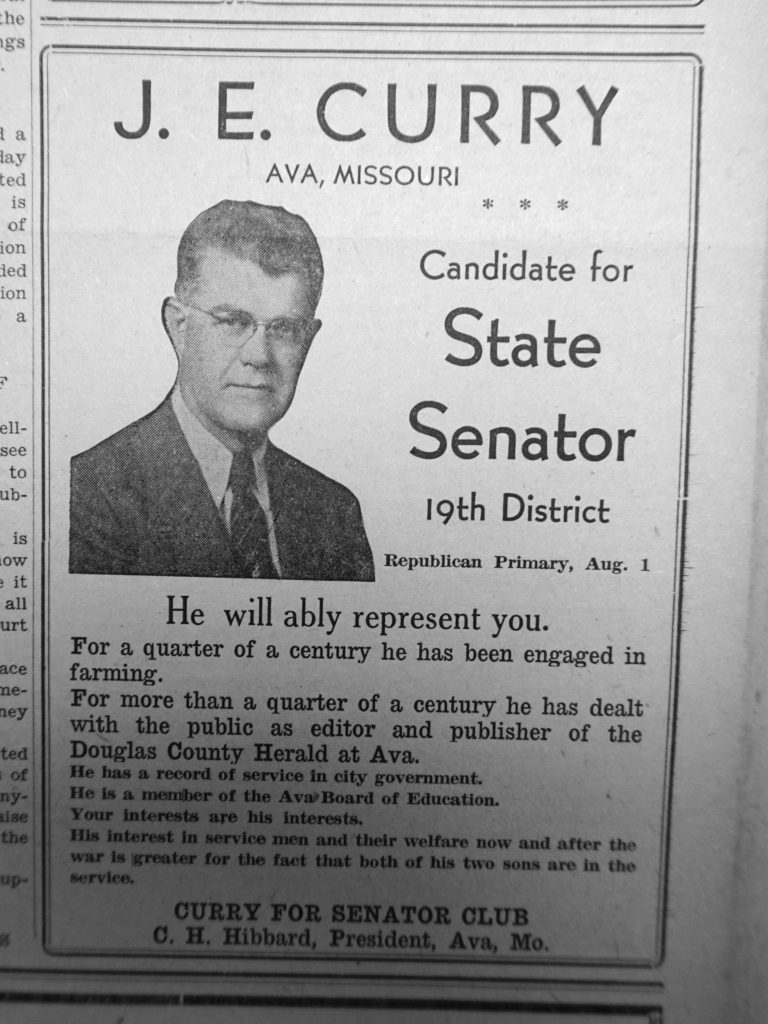 Mrs. Gladys Berger Stewart left Wednesday for Mexico City where she will be a delegate to the Inter-American Bar Association  Convention.  Mrs. Stewart is representing the National Women Lawyers’ Association of America.

First Lieutenant H.W. Hicks of Wasola, pilot, and First Lieutenant Tom Evans of Pittsburg, Pennsylvania, pilot, with their crew flew their B-25 bomber from California to Pearl Harbor to go into duty in the Pacific.

BRYANT –– Mr. and Mrs. Glen Archer are the parents of a baby girl born July 19.  She has been named Bonnie Pearle.

The WAVES will have a birthday on July 30, the second anniversary of the signing of the bill establishing the Women’s Reserve of the United States Navy.  More than 75,000 WAVES, officers and enlisted personnel alike, now are performing more than 250 different kinds of important jobs at naval establishments throughout the United States.

A group of friends and relatives gathered at the home of Mr. and Mrs. W.H. Fitzgerald Sunday, July 16, in honor of Mrs. Fitzgerald’s mother, Mrs. Henrietta Lakey, for her 76th birthday.  There were about 175 present.

Mrs. Willie Hutchison and daughter, Mrs. Curt Evans and her son, Billy Joe, left Ava Monday for Norfolk, Virginia where they are to spend a week with Mrs. Hutchison’s son and his wife, Mr. and Mrs. Elza Hutchison.  Elza and Mrs. Hutchison, the former Miss Alma Teeters of Detroit, Michigan, were married June 23.  Mr. Hutchison who is in the Navy is now stationed at Camp Bradford, near Norfolk, as an instructor.

Pettit’s Theatres, at the Avalon, “Pride of the West”, it’s Hop-A-Long and Windy in an old time fighting Western.  Also chapter one of “Masked Marvel.”

Luther Turner, a former resident of Ava, and whose mother resides at Arno, was shot and killed while he lay asleep on a pallet in the doorway of his home on the Fred Loesch farm near Sitka, Kansas, at 4:00 o’clock last Friday morning.  The body arrived in Ava last Sunday accompanied by his brother Oat Turner who happened to be in that section of Kansas at the time, and was taken to the Mt. Tabor Cemetery near Arno for burial.  The assassin, whose identity is unknown used a shotgun, the charge blowing Turner’s head to pieces.  Strong suspicion is centered on Turner’s wife, according to the brother, although no arrests have been made.  Another employee on the farm is also under close surveillance of the officers, he stated.

Carl Mays, whose home is at Bryant in Douglas County, stands a chance of enjoying a unique position this year –– that of winning a pennant for some likely American League Club and thus catapulting himself into another world series to the intense dissatisfaction of other members of the Red Sox.  Mays is now idle, having detached himself from the Red Sox payroll, ostensibly because the Red Sox could not win games with him in the box.  He expects to be transferred to either the White Sox, Yankees, Indians or Tigers, any of which would be pointed straight to pennantville with the submarine start on the staff.

The city’s new fire engine was unloaded at the Ava Depot one day last week, and is being prepared for action in case it should be needed at any time. The engine is at present stationed at the Ava Motor Co. on Jefferson Street.

Douglas County had a total of 5,247 school children during the last school year according to the enumeration compiled by County Clerk E.C. Bunch and forwarded to the State Superintendent’s office.  The enumeration represents the total attendance at the 111 school districts of the county.  Classified according to sex, there were 2,722 boys and 2,525 girls in the schools.

The city council of Ava met Monday evening in its new headquarters in the Herald Building, and fixed the levy for 1919 taxes for current expenses, at twenty-five cents on the one hundred dollars valuation.

A bucket brigade was hurriedly called out by the fire bell this morning when fire caught in the roof of Taylor Fowler’s home just east of the square. The fire started from the stove pipe, but was soon under the control of the Bucket Brigade.

TIGRIS ITEMS –– The mill at Tigris is broken down, and we have not been able to get any corn meal or chick feed for some time.

John Lathrop moved this week into his property on Quality Hill which he recently purchased from Frank Stewart.

Crops are suffering for rain.

Sedalia has made ice now for three years.

The Agee family of Missouri is one of the oldest in existence. An Agee is mentioned in 2 Samuel 23:11.

The royalties of Europe patronize the bicycle with as much energy as the boys of America.  The king of the Belgians exercises upon one daily, little Queen Wilhelmina rides one when she is at her castle of Het Loo, and the czarowitz, Princess George and Nicolas of Greece, are all cyclists. The bicycle of the Khedive of Egypt is a gorgeous machine, almost entirely covered with silver plating.

It is the biggest kind of insult to offer a very small sum of money as a bribe.

A Jefferson City policeman has resigned because he did not have the heart to kill a dog.

All the largest rattlesnakes in Missouri are being killed this season.

Five cents a dozen has been the ruling price for eggs in Nevada for a month.

RICHMOND, Mo. –– A big saw mill located eight miles west of here was the scene of a terrible explosion Friday afternoon. The party running the engine allowed the boilers to become dry and then rapidly pumped in cold water.  As a result the mill is a complete wreck. Two workmen, Crowley and Johnson, were hurled many yards from the scene. Johnson is terribly mangled and his recovery doubtful. Crowley will recover from his injuries.

Kansas City, Mo., is infested with a gang of housebreakers. The police seem unable to apprehend the criminals.

The steamship Australia arrived yesterday, six and one-half days from Honolulu.  Peace prevails throughout Hawaii, and the new government appears to be firmly established.

There was great joy among the vegetarians in Germany last year over the fact that a vegetarian won the annual walking match from Berlin to Friedricharuba.  The same vegetarian pedestrian was in the race this year, and it was generally expected that he would win the match again, but he was badly beaten by a ‘meat-eater.”

The official report says 120,000 people died of the plague in the Canton, China, district.

The Board of Health is going to make Richmond smell better. 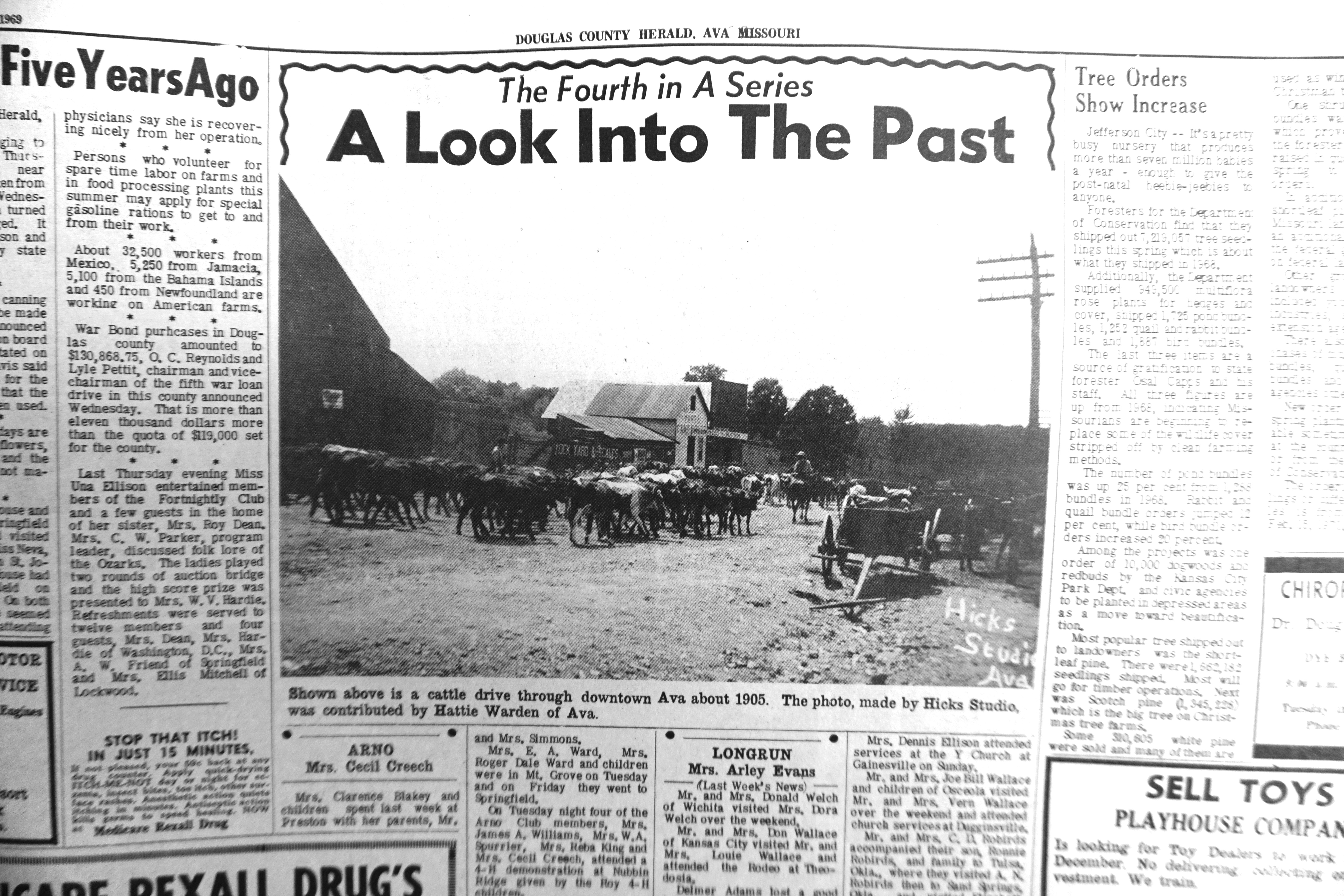