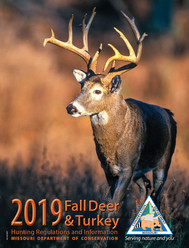 Missouri deer and turkey hunters can get the most current information on fall hunting from MDC’s “2019 Fall Deer and Turkey Hunting & Regulations Information” booklet.

Get current info on what’s new for 2019 fall deer and turkey hunting in Missouri.

JEFFERSON CITY, Mo. – Missouri deer and turkey hunters can get the most current information on fall hunting from the Missouri Department of Conservation’s (MDC) “2019 Fall Deer and Turkey Hunting & Regulations Information” booklet, available where permits are sold and online at huntfish.mdc.mo.gov/fall-deer-and-turkey-hunting-regulations-and-information.

During Nov. 16–17, hunters who harvest a deer in the Chronic Wasting Disease (CWD) Management Zone must take their deer on the day of harvest to a designated CWD sampling station.

Adults no longer need a permit to assist properly licensed youth hunters during the youth portions of firearms deer season.

Lessees are no longer eligible for no-cost resident landowner permits.

New managed deer hunts have been added, and others have been removed or modified.

Deer hunting regulations have changed for some conservation areas.

Nontoxic shot is now required on several conservation areas that did not require it in the past.

Buy Missouri hunting and fishing permits from numerous vendors around the state, online at huntfish.mdc.mo.gov/permits, or through MDC’s free mobile apps, MO Hunting and MO Fishing, available for download through Google Play or the App Store.