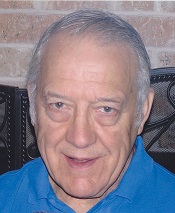 Vester “Vasel” Myers was a husband, father, grandfather and great grandfather. Vasel passed away peacefully surrounded by his family on July 5, 2019 in Houston, Texas.

Vasel was born March 22, 1933 in Ava, Missouri to Vester Myers and Pansy Barnett.

After high school he worked as a logger in Wapello, Iowa and Raymond, Washington then returned to Ava, Missouri to join the United States Marine Corps, serving 20 months in Korea. On return from Korea he was sent to Olathe, Kansas for discharge, where he met the love of his life, Hazel. They were married May 1, 1955. They had two children. He graduated with a BSME from Finley Engineering College in 1959 which lead to a job with Boeing in Wichita, Kansas. During his tenure with Boeing he worked on the B-52H aircraft, Saturn V Missile Program, GAM-87 Missile Program, and the Space Shuttle Program. He worked on all shuttle flights, STS-1 to STS-135.

Vasel is survived by his wife of 65 years, Hazel, two children, Larry and Shirley; grandsons and wives, Christopher and Samantha, Wesley and Reyna; great grandchildren, Janica, Saj, Summer, Brooke and Chance; five brothers and wives and one sister, Eugene and Dorothy Myers, Dale and Donna Myers, Bob and Linda Myers, Jimmy and Irene Myers, Sue Poole, Roger and Patty Myers and numerous other relatives and friends.

A memorial celebrating Vasel’s life will be held at Grace Church of the Nazarene, Springfield, Missouri on Saturday, July 20, 2019 at 1:00 pm. Interment will be with military honors at the Houston National Cemetery at a later date.