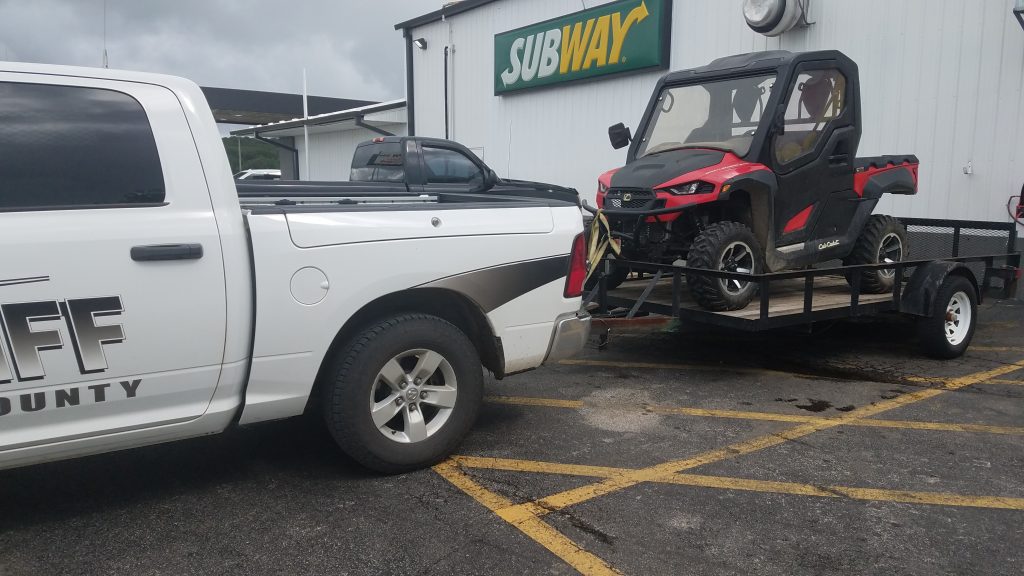 The two UTVs stolen from J Brothers were located by law enforcement and returned to the store four days following the burglary.  Both the Ava Police Department and Douglas County Sheriff’s Office were instrumental in tracking down the missing merchandise and apprehending the suspect. According to Police Chief Reggie Johnson, formal charges are pending.

Local law enforcement agencies have been on alert this week as reports of assaults, burglary, and two shooting incidents took place in Ava and Douglas County.  To-date, city and county officers are still working to secure details on several of the incidents.

On July 11, around 5:15 p.m., Ava Police Officer Kodie Johnson received a report of a black 2018 Cub Cadet UTV that had been stolen from J Brothers (Cooper Lumber).

Later, Ava Officer Jon Perrien and Cpl. Dewayne Butterworth received a second report noting a 2018 Cub Cadet UTV, a red one, had also been stolen from the same business site.

Contacting Walmart management, Officer Johnson received permission to review the store’s outdoor security camera footage, and with the help of Sheriff Chris Degase and the Douglas County Sheriff’s Department, Ava PD was able to identify the suspect.  The suspect was also wanted for other vehicle thefts in this area.

On July 15, Sheriff Degase contacted Sgt. David Overcast with Ava PD to provide additional information about the location of the stolen UTVs.  One of the stolen UTVs was located inside the city limits, on the southwest part of town, while the second UTV was found parked near the Mansfield Signal, on the south side.

An assault incident was reported to the Douglas County Sheriff’s office on Sunday, July 14, when dispatch received a call stating two subjects, a male and female, had assaulted a property owner.  The incident occurred south of Ava, near Squires.

Both subjects were reported  as leaving the scene on foot, taking the property owner’s wallet which contained money and credit cards.  After an area search, the Sheriff’s Department located both subjects and took them into custody.

The assailants are identified as Randale Mathes, age 45, of Arkansas, and Ashley Millington, age 39, of Tennessee.

Cash only bonds for Mathes and Millington have been set for $20,000 and $10,000, respectively.  Both are currently incarcerated in the Douglas County Jail.

On Monday, July 15, Cpl. Dewayne Butterworth and Officer Jon Perrien with Ava PD, responded to a call that an individual had displayed a machete (or tomahawk) and a pistol at the Ava Sonic drive-in location. The two individuals were in a white Dodge truck.

According to reports, the suspects left Sonic, driving west on Highway 14, where they then turned north on K Highway.  The vehicle had not traveled far when the vehicle stopped, and one of the suspects was shot in the lower hip.

The Douglas County Sheriff’s Office responded to the call.

According to Sheriff Chris Degase, after the two suspects left Sonic the driver stopped the car midroad and shot his cousin, Bobby Roberts.   Roberts is in the hospital with two bullet wounds, listed in serious condition.

Ronald Roberts, the shooter, was apprehended near the railroad tracks at Cedar Gap.  Roberts was taken into custody without incident, and has been charged with 1st degree assault and armed criminal action.

In the search for Roberts, the Douglas County Sheriff’s Office was assisted by Mountain Grove and their tracking dogs.  Other agencies involved were Mansfield, Seymour, Wright, and Webster counties.

On Tuesday, July 16, another shooting incident took place in a house located behind Signal in Ava.

In response to this incident, the Douglas County Sheriff’s Office is seeking Cody Franklin, age 32, of Ava, as a person of interest in the double shooting that wounded two individuals.  One of the victims is a juvenile.

Franklin is considered armed and dangerous.

Anyone with information about Franklin’s whereabouts, or knows the location of one of the vehicles, please call the Douglas County Sheriff’s Office, (417) 683-1020.