Maynard Wallace, a Thornfield native and superintendent of schools at Forsyth for the past 15 years, will assume the role as superintendent here Sept. 1.

Local law enforcement agencies are very concerned about the large number of youngsters who are allowed by their parents to ride all-terrain vehicles illegally.

HUNTER CREEK –– Sounds like a broken record, but we are hot and dry out this way,

On Tuesday, July 12, Miss Kelsea Pettit celebrated her fourth birthday with a party held at the home of her parents and sister, Richelle.

The Heart of the Hills Food Harvest has found a building to rent. They will be re-locating from the Church of Christ to 820 South Jefferson, next to Ron’s Carpets.

MT. TABOR –– We are so sorry to hear of the passing of Dr. Marvin Gentry.  Dr. Gentry was a good country doctor and went many miles working house calls and we didn’t have the good roads in his time of practice either.  At the time of his retirement he was still only charging $3 for his office calls. 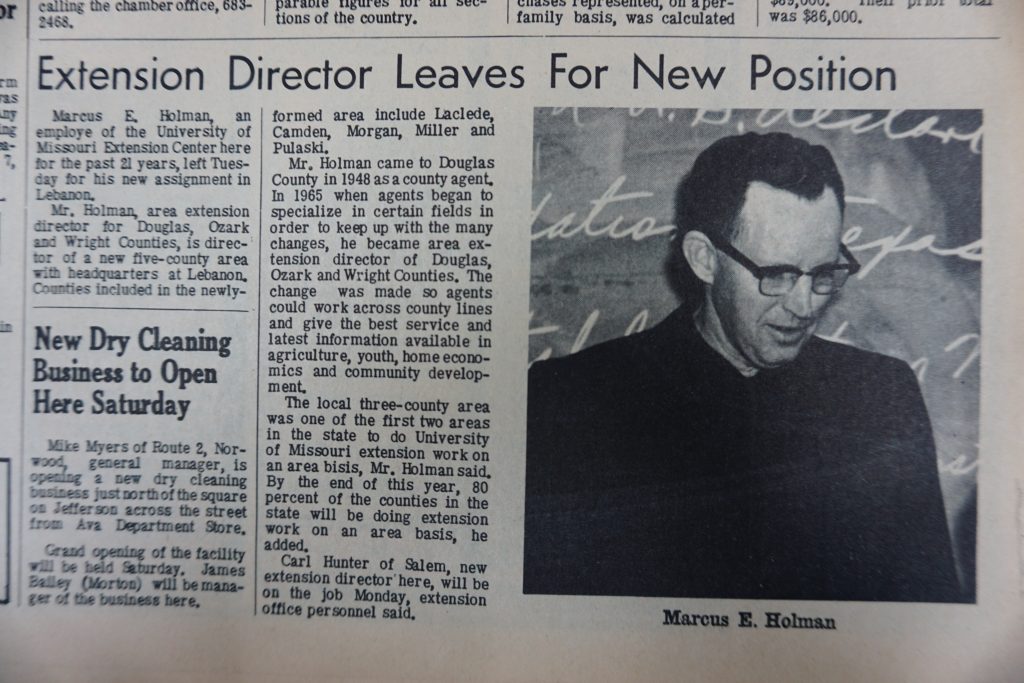 July 3, 1969 -Marcus E. Holman, an employee of the University of Missouri Extension Center here for the past 21 years, left Tuesday for his new assignment in Lebanon. Mr. Holman, area extension director for Douglas, Ozark and Wright Counties, is director of a new five-county area with headquarters at Lebanon.

Flames sparked by small explosions from gas fumes, leaped hundreds of feet in the air destroying the two-story Ava Salvage building last Thursday evening which housed two apartments, the salvage firm, and a warehouse packed with new appliances, resulting in an estimated $60,000 loss.

Robert Turton, co-owner of Medicare Rexall Drug here, and president of the chamber of commerce, was hospitalized Monday night after being run over by  his own automobile.  Mr. Turton is listed in ‘satisfactory’ condition at St. John’s Hospital in Springfield where he was admitted Tuesday with a fractured leg.  Mrs. Turton said he apparently failed to get the automobile in park and it began to roll just as he stepped from the car.

A 16-year-old Douglas County juvenile and a 23-year-old man from Michigan were bound over to circuit court here Wednesday on charges of breaking and entering and grand stealing.  The juvenile is accused of burglary, breaking and entering the home of Bill Singleton on Hunter Road, five miles east of Ava, on July 3 and allegedly taking a .35 caliber automatic pistol, a .22 caliber Browning automatic rifle, a Remington 20-gauge shotgun and $25 in silver.

Glen Dale Hartley, son of Mr. and Mrs. Voyne Hartley of Route 1, has been named to the Dean’s Honor Roll for the spring semester at Drury College in Springfield.

A 1969 Chevrolet truck owned by Charles Whorton of Mansfield literally cracked in half Tuesday at the junction of Route K and Highway 14, west of Ava. Driver of the truck, Ellis Stephens of Ava, suffered head injuries when the milk tank fell, forcing the back of the cab forward against him.

Mr. and Mrs. C.E. Grabeel have their son, Scollan Grabeel of Hermiston, Ore., as a guest in their home on Route 1.   He will also visit his sister, Mr. and Mrs. Russell Klineline and their sons.

EVANS –– David Shannon, son of Mr. and Mrs. Lyle Shannon, has a broken leg resulting from an accident with a tractor. 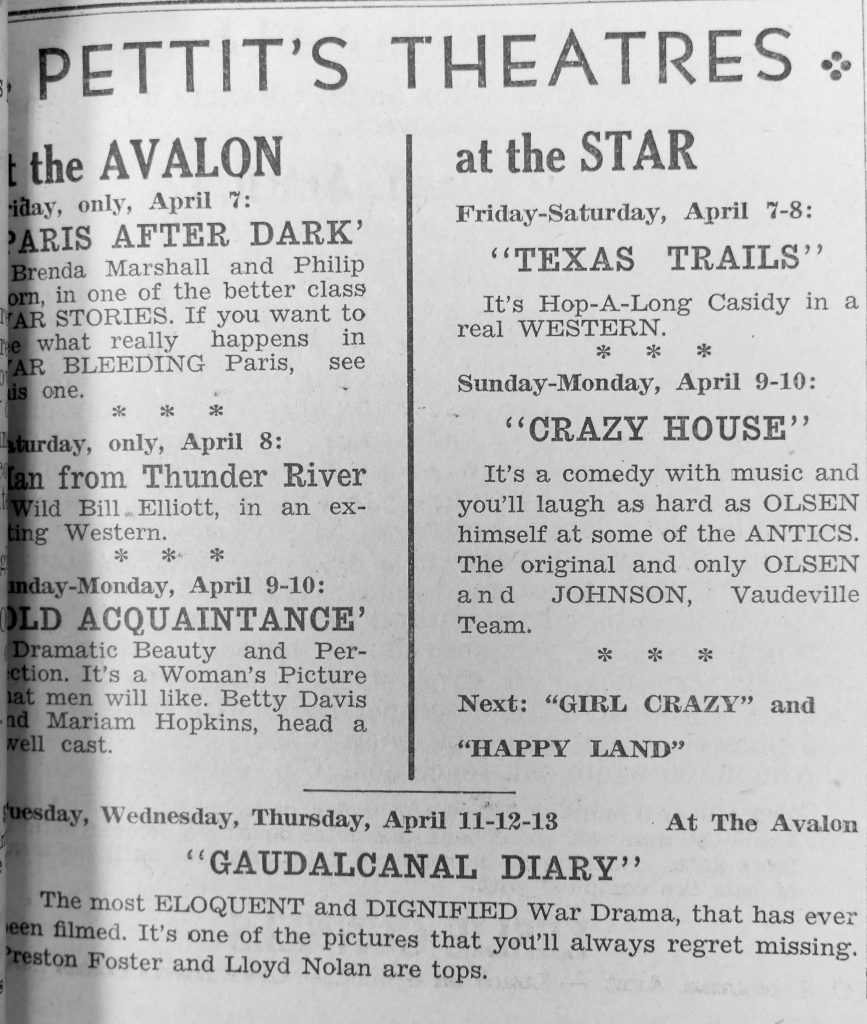 Drought conditions are so bad here that pastures won’t last another two weeks without rain, County Agent Clyde Clubb said Wednesday –– and that is true almost all over the county.

Fines for improper parking were imposed on four persons Tuesday in the court of Police Judge R. A. McJimsey, but those four persons have refunds coming to them. The four persons each paid $8 – $1 fine and $7 costs.  Then city officials, not desiring to be so rough on minor traffic violations, got busy and cut the costs down to $2.  So, those who paid $1 fines with $7 costs have $5 refund coming to them from the police judge.

Mrs. Addie Davis and Mrs. Ureath Baxter were fined $25 and costs – $32 in all – in the court of Police Judge R.A. McJimsey for fighting on the streets. The two women were arrested Saturday afternoon by City Policeman Pleas Cooper on the west side of the square, where the quarrel had attracted a large crowd.

Dr. M.L. Gentry of Jefferson City, director of the division of child hygiene in the state health department has been commissioned a senior grade lieutenant in the Navy and has resigned his job with the health department.  He expects to serve with the medical unit at the Corpus Christi, Texas air training base, and will go there Sunday.

General Hideki Tojo, Japan’s warlord premier, was relieved of his post of army chief of staff Tuesday in a “great national crisis.”  Members of Congress saw the change as a face-saving gesture recognizing failure of the Japanese Army and Navy to halt the American offensive.

Mr. Ray Hill and Miss Sallie Lou Ludwig were married Thursday last week at Mountain Home, Arkansas. They were accompanied by Mr. and Mrs. Ray Cox and son, Harley, and Mrs. Ross Hill and Miss Thelma Hill, all of Ava.

Mrs. Glenn Harnden received word last week that her husband, Sergeant Glenn Harnden who has been stationed at Fort Leonard Wood, has been transferred to Camp San Louis Obispo, California.

ROY –– L. B. Barnes bought the store at Cross Roads last week from Bryan Gott.  Mr. and Mrs. Claude Whetsten are moving to Cross Roads to take charge of the store.

FIELDON –– Mrs. Berley Hancock and sons, James and Joe Bob, visited in the Tom Hancock home over the weekend. 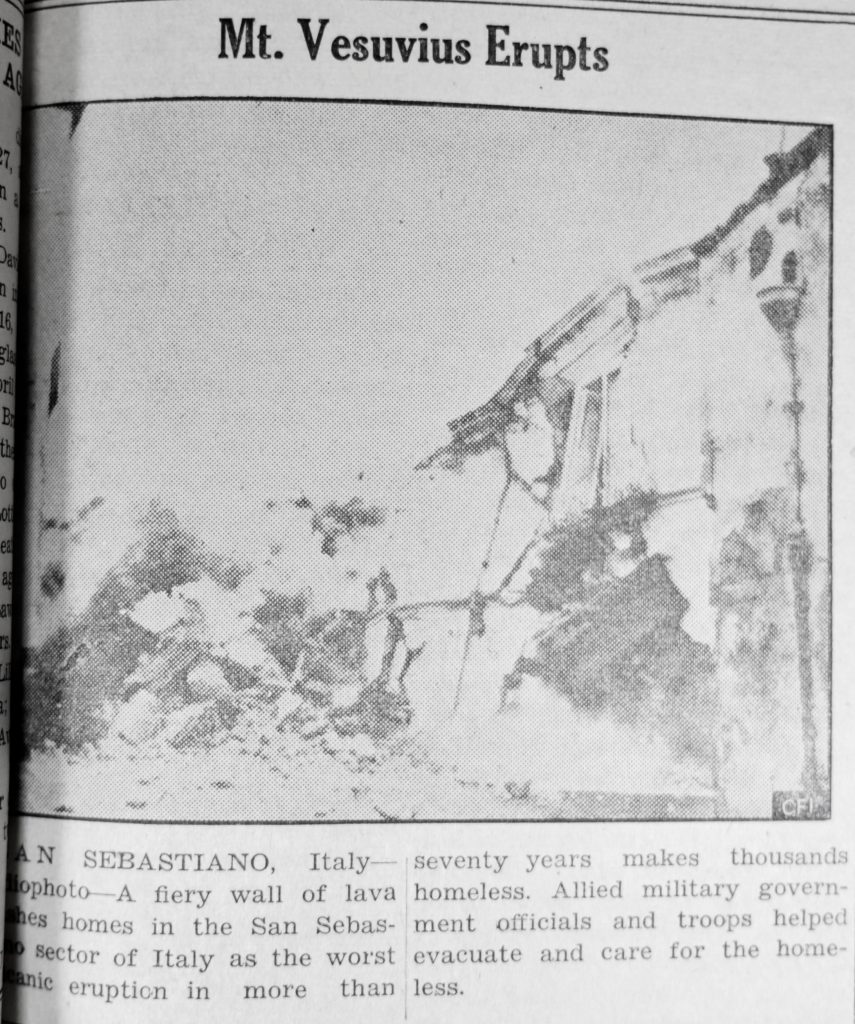 A trial in Justice J. W. Haswins court in Ava on Monday of this week resulted in a fistic bout between the two parties at law –– F.E. Simmons, real estate broker, and John Lathrop, barber.  The two men were soon separated, however, and no one was seriously injured.  Suit was brought against Lathrop by Simmons to collect commission on a real estate deal made recently whereby Lathrop’s residence property in Ava was sold to E.A. Bristol. The jury’s verdict was in favor of Lathrop, but Simmons has announced he will appeal the case to circuit court. Both men were fined for fighting.

Benton Township, including the city of Ava, has had a stock law for some time in so far as sheep, goats, and swine are concerned; but many prominent farmers are now of the opinion that the law should also restrain horses, mules, asses and jennets from running at large.  The date of the election is August 12.

President Wilson slapped the farmers of the United States in the face today by vetoing the agriculture appropriation bill because it continued “the provision repealing the daylight savings law.”

The Ozark County Times of last week says that the ballgame at Ava on the Fourth between Gainesville and Ava teams “resulted in a victory for the Gainesville team, but owing to home rulings rendered by the Ava umpire, W.F. Reynolds, which were grossly wrong, the score stood Ava 9 and Gainesville 8.”  Many spectators at the game in Ava, and some of them from Ozark County, too, will say that the Gainseville boys were given a square deal, and if anything were given the advantage in a few instances.

NEW YORK –– The presidential ship, George Washington, which sails for France next week, has been fitted up with a nursery to take care of the “war babies” returning on that vessel.  Two hundred war babies are scheduled to sail on the ship on her next trip from France to the country, and at the request of Dr. C. A. Ricker, the ship’s surgeon, the American Red Cross has provided the ship with baby food, milk, clothing, and other prerequisites of infantile comfort.

The apple crop from the M. L. Coleman orchard at Marionville, Mo., was sold recently for $90,000.  The orchard comprises 200 acres.

Mr. and Mrs. Burney Kay have moved into their property on Quality Hill, recently acquired from Fred Dyer.

A red paint mine has been discovered near Braymer.

Linn County horses are being shipped to Pennsylvania.

The County Teachers’ Institute has come to stay in Missouri.

Let it be recorded that not a Bates County school teacher chews gum.

Seventy-eight buildings have either been torn down or swept into the Missouri River since the stream commenced cutting above East Atchison three or four months ago.

Indicating a leading industry in southwest Missouri, the following notice is posted in the Charleston depot: “All passenger conductors and engineers on Nos. 37 and 58 will stop at all melon switches from this date until after the melon season.

S. C. Parker, of Clay Township, was seriously wounded by a blow with some heavy instrument in the back of the head, about ten days ago, while out hunting his horses, and returned home in a serious condition. He was discovered by some of his family, clinging to his horses neck at the watering trough near his stable, where he remained unconscious until his death which occurred on Sunday, the 22nd.  He failed to recover sufficiently at any time since he was found to give an account of the affair.  This leaves the matter surrounded in mystery.  The constable of the township has arrested one of his neighbors who is reported to have threatened to kill him.  The preliminary investigation may develop an explanation on the mystery.  The wound was of such a nature as to strongly indicate that he met with foul play and a thorough investigation will be made by county officials. Parker was a well-known man and stood liked in the community where he lived.  At one time he was actively engaged in politics and was the candidate for representative on the anti-republican ticket of the county.

A barber in Detroit was knocked speechless the other day, during a thunderstorm.  Lightning is mighty powerful.

When everything else fails and your insomnia seems to be incurable, try and get a position as night watchman.

The meek must inherit the earth, for it’s plain they never could get it in any other way.

The establishing of the Hawaiian Republic simply means that President Cleveland’s claim to jurisdiction and eminent domain has been contemptuously denied by the people of those islands.  The citizens of the new government may console themselves with the reflection that a republic that hasn’t been preceded by a revolution is rarely worth having.