The City and County will each pay $431 as the local obligation for a $5,800 can crusher and blower to be used at the recycling center. The equipment is being purchased through a Waste Management grant.

Rilla Gentry celebrated her 86th birthday Sunday, July 10 at her home on NW 15th Street.  With her to enjoy cake, ice cream and strawberries and coffee were her husband Ralph, Ola Staley, Max and Nancy Bushman, Beulah Gentry and Henderson and Allie Gentry.

Nick and LeeAnn Cardone are proud to announce the birth of a son, Alex Dale, born June 22.  His brothers Jess and Joseph and his sisters Amy and Anne Marie welcome him to the family.

The senior girls’ varsity basketball team from Ava claimed the championship of the College of the Ozarks summer team camp.  The Lady Bears swept through the round-robin competition and tournament without a loss.  Ava team members are Heather Sweeney, Tara Bray, Becky Scrivner, Lindsey Singleton, Brandy Lakey, and Mindy Atchison.

SMALLETT –– Odie and Glenda Kresse visited with Albert and Joyce on Friday.

MT. TABOR – The post office at Rome (Mo.) was one of the earliest post offices, but was discontinued for a time during the war and then re-established later. The Rome bridge was built in 1914, replacing the old swinging bridge.  There’s lots of history at Rome.  It’s too bad these little villages have to be abandoned and go down. 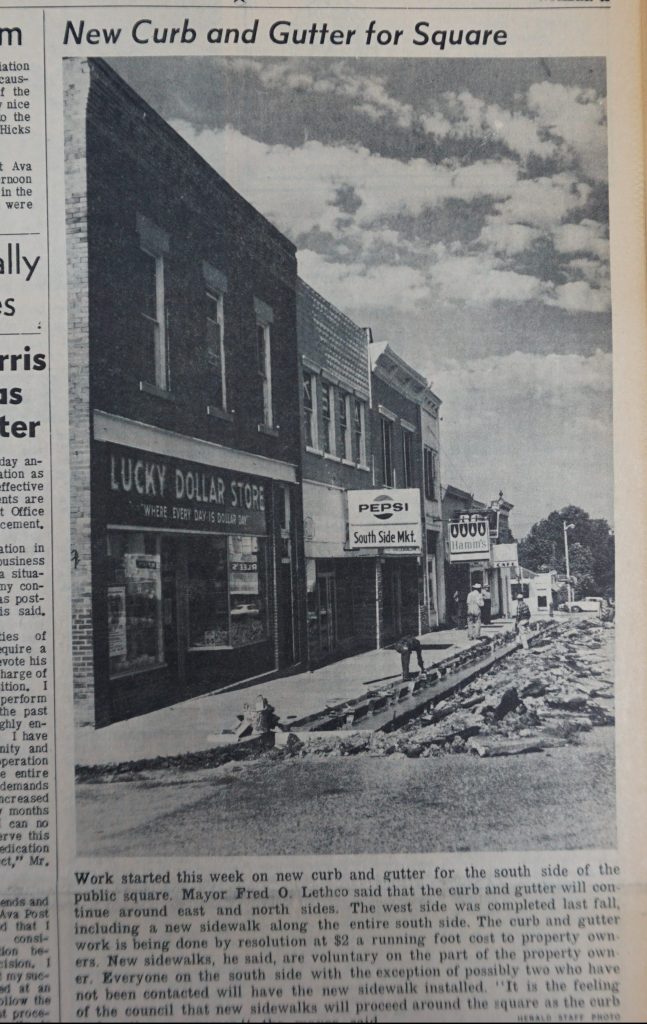 A quantity of cash, fire crackers and a radio were taken in a burglary recently at Jerry’s Texaco located at the junction of Highways 5-14 in west Ava, according to Douglas County Sheriff Troy Hancock and Deputy Edwin Riley.  Deputy Riley said that $2.50 in cash was taken from a soft drink machine, along with $1.00 in pennies, $15 worth of fireworks and an Airline transistor radio.

Mary Jane Workman, 17, a former resident of Ava, is teaching in the mission school for Mexicans in Monterey, Mexico with Rev. and Mrs. Don Jones of Montgomery, Ala., and their two children.

Rev. Milan G. Bourland, who has been a teacher at the Mt. Zion Bible School for the past 14 years, is leaving that position to accept a pastorate in El Monte, Calif., which is located just east of Los Angeles.

Southwest Baptist College in Bolivar has announced Pamela Ann Pettit and Carol Jane Guthery of Ava, are on the list of new students enrolled for the summer semester.

Fasting in his Charleston, SC jail cell where he has been held since his arrest on a charge of inciting to riot, the Rev. Ralph D. Abernathy called for non-violence in connection with a hospital workers’ strike in Charleston. Abernathy and four others jailed on similar charges were held in lieu of $50,000 bond each. 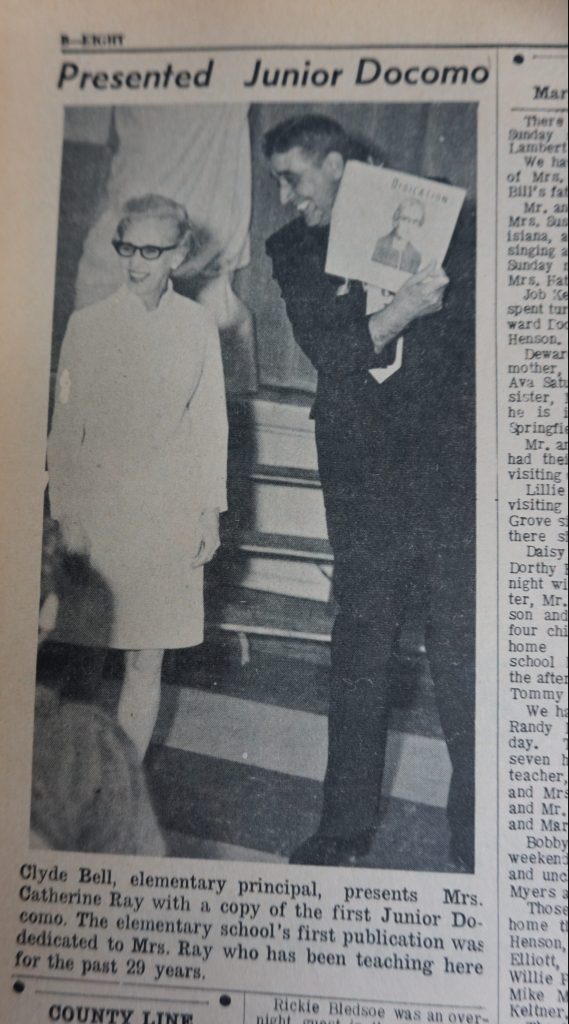 ALMARTHA –– Mr. and Mrs. Joe Murphy are keeping their grandson, Patrick, son of Mr. and Mrs. Dwayne Murphy, while their other son, Michael, is in the hospital for surgery.

If you consider the money being raked in by institutions of higher learning, you can better appreciate references to the “hauls of ivy.”

RED BANK –– Mr. and Mrs. Roy Davis have recently moved to Ava after spending the past several years in Kansas.

Ava students captured a total of 47 ribbons in the track meet held last Wednesday at Southwest Missouri State College in Springfield, according to Coach Dolan Hawkins. 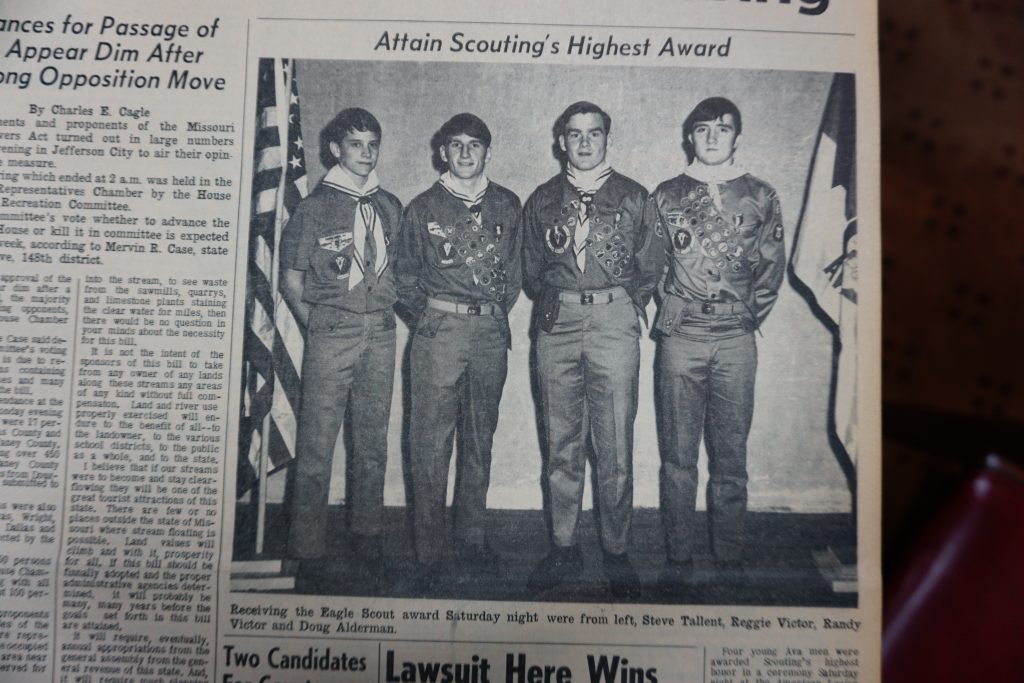 Arrests for traffic violations in Ava will be started Monday, it was announced by the city council this week.

Everett Hesterlee, owner of the former site of the Sallie Jo Adams home in the southwestern part of town, which was brought into the city limits last spring, Monday filed with Circuit Clerk Fred Curnutt a petition asking that the ordinance be declared void and that the city be enjoined from assessing and levying municipal taxes against the land or against residents within the territory that was annexed by the city.

A Nash sedan belonging to Jack Vinson was found this morning wrecked near Smallett after being taken from in front of his home Wednesday night.  It had been turned over and badly damaged. It was found by Mr. Vinson and Al Westphal, auxiliary state highway trooper.

Agnes Dell Smith won the senior medal and Wanda June Snelson won the junior medal in two Bible speech contests at the Wasola General Baptist Church Sunday night.  The contests were sponsored by the Ozark County Chapter of the Women’s Christian Temperance Union. There were six contestants in each group.

B-29 Super-Fortresses have twice bombed the Japanese homeland. On June 15 the main target of the B-29s was Yawata, a Japanese steel center. On Friday last week the big bombers struck again at Yawata and at the naval base of Basebo, both on the island of Kyushu.

Douglas County sportsmen shared in the improved raccoon hunting which was general for the state and which resulted in a total harvest, of 27,598 ‘coon pelts last winter, 90 percent more than during the preceding open season, according to a report just released by the state conservation commission.

At least 162 persons lost their lives in the Ringling Brothers and Barnum and Bailey Circus fire  at Hartford, Connecticut, Thursday last week.

SANDY –– Herbert Wilson, Hershel Yates, John Gott and Norman Bass have returned from Kansas this week where they have been working in the harvest.

ROCKBRIDGE –– A son was born to Mr. and Mrs. Homer Mackey last Tuesday at the family home.

One of the most successful celebrations in the history of Ava was participated in July Fourth by hundreds of people from Douglas and adjoining counties.  Contrary to the expectations of many, there was practically no drunkenness, and the officers kept the situation well under control during the entire day.

JEFFERSON CITY –– The special session of the Missouri legislature which convened on July 2, adjourned at noon today having ratified the federal woman suffrage amendment, and having restored capital punishment by hanging in Missouri.

Whiskey, which caused the death of Alfred Hutsell, a young farmer at a country picnic near Manes, Wright County on July 4, and came near resulting in the death of Ernest Rayborn, a neighbor, is alleged to have been poisoned by Randle Smith, a wealthy farmer of that neighborhood, who is charged with murder in the first degree on account of the death of Hutsell.  Whiskey which was found in one of two bottles said to have been furnished by Smith has been examined and is said to contain strychnine.  According to Fred Lewis, an attorney from Kansas City, the poison record of a drug store in Hartville shows Smith bought one-sixteenth of a grain of strychnine June 23 “to poison crows.”

The ballgame between Ava and Gainesville was very interesting and was witnessed by a large crowd. Gainesville took the lead from the first and held it until the last inning when Ava came in with enough scores to win the game, nine to eight.  Ava’s line up: Claud Crumley, Elmer Curry, Frank Waters, Oden Reynolds, Sam Curry, Homer Owens, Boone Norman, Earnie Spurlock, and Lloyd Reynolds.

A wind storm accompanied by rain and lightning hit Willow Springs Wednesday night about 1 o’clock doing considerable damage. The storm came from the east and several say the cloud resembled a tornado.  About 50 trees in the city were blown down.

The Ava Telephone Company began a series of improvements on Wednesday this week when three new rural lines were started south from the city.  T. L. Plummer, manager of the Company, states that all lines are to be put in good condition during the summer and a number of new lines will be added.

Misses Estella Berger, Mabel Wensel, Orla Mankin and Alta James who are attending school in Springfield spent the weekend with friends and relatives in Ava.

Roy Dennis of Mansfield was called to auction the public sale of Mrs. Wm. Hartley of Arno on Tuesday of this week owning to the illness of Col. T.A. Kay, who was billed as the auctioneer.

The adverse decision of the Oklahoma Supreme Court on the application of the towns of South Enid and Pond Creek to compel the Rock Island Railroad to build depots and stop trains has been quickly followed by an outrage.  At 4:20 this morning, a mile south of Enid, the Rock Island bridge was blown up with dynamite and a freight train demolished.

There are 28 race horses in training in Mountain Grove.

Gambling is no longer allowed in the Missouri penitentiary on  holidays.

It is estimated that it will take 12 months to complete the state university building in Columbia.

In accordance with the custom by which the governor of Missouri pardons two convicts on the 4th of July, two murderers were released on the last national anniversary.

Sheriff Hancock is working a gang of prisoners on the Hunter Creek Road east of Ava.

Jno. Swearingin of Lincoln Township was before Esquire Wagner on a charge of disturbing the peace. The jury found him guilty and imposed the punishment of a fine of $25 and costs.

Deputy United States marshal W.H. Thomas, of Springfield, was down last week and arrested Riley Wilson for unlawfully selling whiskey contrary to the laws of Uncle Sam. He was taken to Springfield where he will be boarded at the expense of the public.

A girl found a package of love letters written to her  mother by her father before they were married.  The daughter saw that she could have a little sport, and read them to her mother, pretending that they were recent and substituting her name for that of her mother, and that of a young man known to both of them.  The mother jumped up and down in her chair, shifting her feet and seemed terribly disgusted and forbade her daughter from having anything to do with the young man who would write such sickening and nonsensical stuff to a girl.  When the young lady handed the letters to her mother to read, the house became so still that one could hear the grass growing in the back yard.

Mrs. Fenetta Sargent Hawskell, the famous lecturer from St. Louis, will give an entertainment in Ava on Saturday, August 11, for the benefit of the M. E. Church.

Calvin Haynes of Washington Township reports that he had a cow stolen from his lot on Monday night. The cow was found in the possession of Harry Jeffry who explains the fact of his possession by stating that he purchased the cow from Jno. Howard, a son-in-law of Haynes.  Howard has left the country, or is hiding.