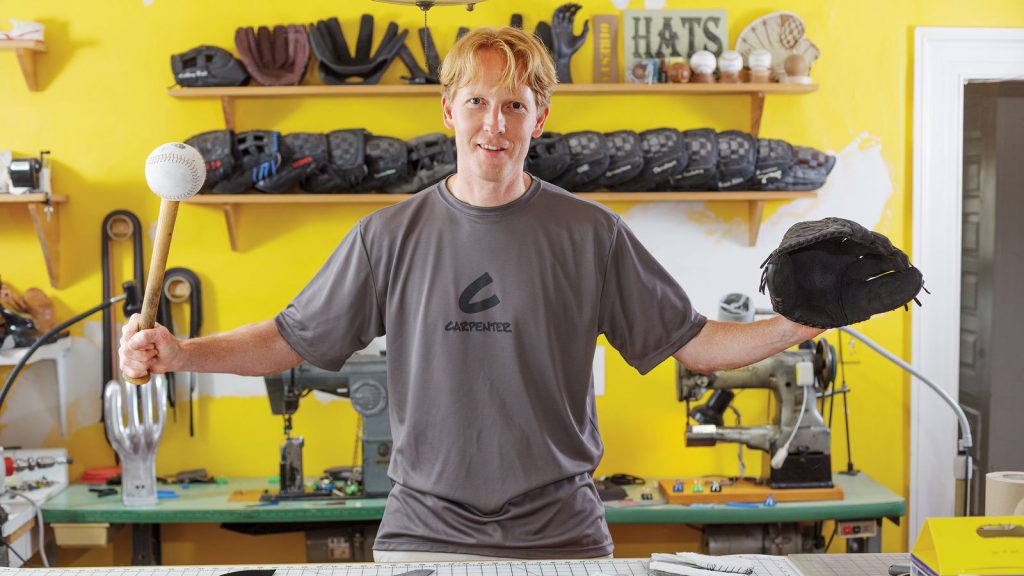 Submitted Photo Scott Carpenter of Marucci Sports moved to Ava in 2000 and took an entry-level job at Rawlings in order to learn how to make baseball gloves. He went on to found his own custom ball glove company making fully synthetic gloves custom-fit to a specific player’s hand. His company was recently acquired by Marucci Sports in Louisiana.

Parts of the story could be a movie.

An outsider comes from the big city to the small town. Gets in the doors of a local manufacturer by working as a night-shift janitor. The job gets him access to the equipment. The processes. The materials.

After a few months he’s gone. Six states away, he uses what he learned to start his own business. Two months later, the big corporation closes.

But that version of the story contains oversimplifications, half-truths, and coincidences.

The real version of the story may be a bit less movie-worthy, but is still interesting

Scott Carpenter was a St. Louis born, Yale-pedigreed artist living in New York City. He wanted to learn to make baseball gloves – both to include in an artistic work he was creating, and with the notion of starting a high-end custom glove business.

Rawlings was the nation’s biggest glove manufacturer. The plant was in Ava.

“I sent them a carefully-crafted resume. It had the right weight paper and the right fonts. I listed my degrees, my full Yale fellowship, and the awards I’d won,” Scott laughs. “And they rejected me with a very generic form letter.”

He didn’t give up. 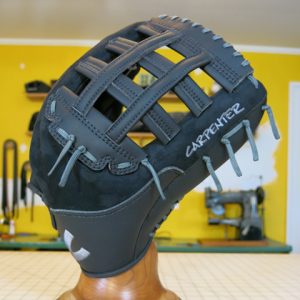 “I just wanted a foot in the door, so I left New York City and went to Ava,” he says. “I walked into the Rawlings office and asked how I could get a job there. They sent me to temp agency where I could apply for entry level jobs. I filled out their application. I didn’t mention Yale, or the awards. I just put down that I had gone to art school.”

He got the job.

Cutting up faulty baseball bats. “Rawlings was making an aluminum bat with interchangeable weights on the end,” he recalls. “The weights were falling off, so Rawlings recalled them. I sat at a band saw cutting them into pieces.”

After that it was data entry. And yes, even a stint as the overnight janitor.

But Carpenter wasn’t at Rawlings on the down-low.

“I told everyone I was there to learn to make baseball gloves.” Scott says. “I’d talk to people while we were on lunch break. They’d show me how their equipment worked, or how they laced the gloves.”

After days spent in the factory, Carpenter would go home and practice by making prototype gloves in his apartment.

He eventually found the honeypot.

Bob Clevenhagen was Rawlings chief glove designer. His office was in the Ava plant. Word was, Clevenhagen had a file cabinet in his office that held all the Rawlings glove patterns from the 1800’s to the models the company was currently producing.

“Bob invited me into his office,” Scott says. “He showed me his whole process. And a curtain of mystique fell away. There weren’t really  any trade secrets involved in making a baseball glove. It was all very practical. I gained a lot of confidence in being able to make my own gloves after that.”

After spending about a year in Ava, Carpenter left to take an artists residency.

Then the Ava Rawlings plant closed.

“I came back to Ava to buy some of the Rawlings equipment,” Carpenter says. “Most of the manufacturing was headed overseas, so there weren’t many people who wanted the machinery. I got it for pennies on the dollar.”

Carpenter and the equipment went to Cooperstown, New York.

He wanted to be close to the Baseball Hall of Fame, using it as a “reference library” for his work.

But his gloves are different.

The first thing you’d notice about a Carpenter glove is there is no leather. Instead, he uses suede-like synthetic materials.

He says the change from all-leather to all-synthetic is inevitable. “Every year the industry sees gloves with more and more synthetics,” Scott says. “It’s just a matter of time.”

A Carpenter glove is said to weigh 5-10 ounces (or the weight of two baseballs) less than other gloves.

The second thing you’d notice about a Carpenter glove is the design. These are no mass-produced gloves available in a few different sizes.

Each glove Carpenter makes is custom fit, designed around a mold of the hand of the player who will be using it.

His gloves have slowly made inroads, changing the mindset of an industry focused on leather.

In 2008 the Baseball Hall of Fame acquired a Carpenter glove, notable because it was the first non-leather glove used in a minor-league game.

In 2011, the Hall of Fame added another Carpenter glove because it had been used by Yankee Pitcher Brian Gordon in a major league game against the Texas Rangers.

Carpenter Trade, LLC was acquired by Marucci Sports in September of 2018.

Marucci is a Louisiana-based company founded by two former big-leaguers and their athletic trainer.

“The relationship is still new so we’re figuring things out. So far I’m doing glove R&D and pattern work for Marucci,” Scott says. “And I’m also making high-end customized gloves for some professional players. We hope to launch an online custom glove shop and offer the advantages of a synthetic custom-fit glove to more players.”

But no matter how that story ends, Ava’s place in the credits of  baseball history remains secure.