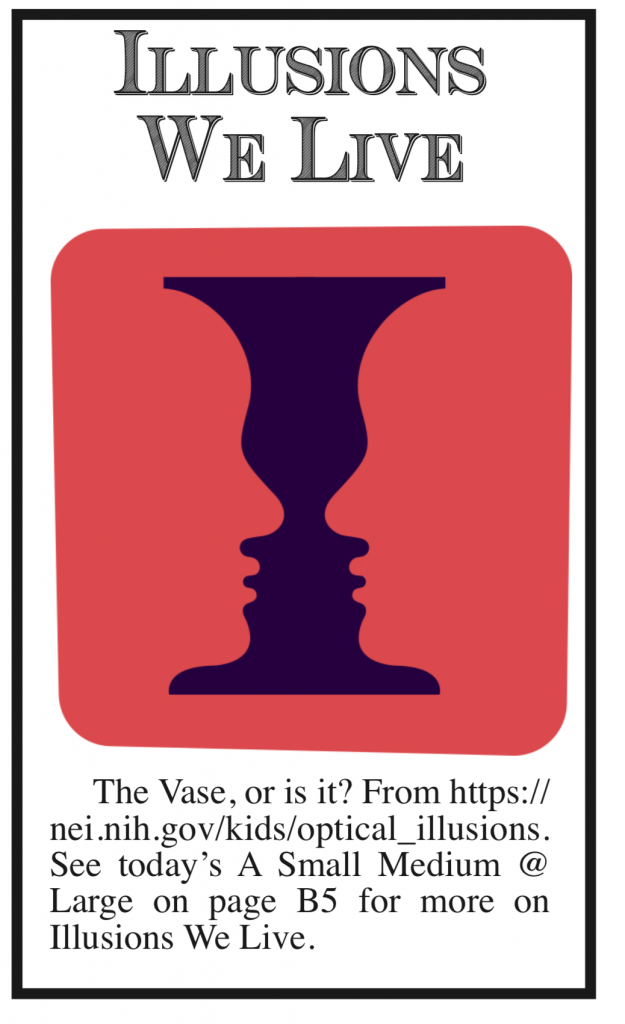 Illusions We Live PART III –Ambiguous and impossible figures illustrate that the brain’s neural substrates for vision can process information in more than one way.  You can review the Blind Sight Exercise (March 21, 2019) to demonstrate how to operate the power of sight independently of the physical limitations your eyes(!)

This multivalence also holds true for the powers underlying all of our physical senses and biological operations. Our mind puts together versions of “reality” in ways far more plastic than many are prepared to believe possible. This raises an interesting question: Can the equipment used for human speech and language be independently utilized for direct mind-to-mind communication as well?

Why not? The ego-bound identity operates upon the internal arising of information in exactly the same way it does from external sources.  “But what,” enquiring readers demand, “if a sudden telepathic awakening went viral and put our theological deodorant to the test?”

Well, it’s another reason for keeping good mental hygiene.   Always use mental floss.  And higher consciousness is not like using Vanish- where you’re invisible and everybody else wonders where the smell’s coming from.

For better or worse, every faith presents a participatory view of reality that challenges “common sense” notions about how perception works. If, for instance, the universe is self-aware, then our highly localized speech centers did not result from random evolutionary processes, and life is not an epiphenomenon of dead matter.

The body of scientific fact, rather, reveals a richly entangled Intelligence that determines the way that life unfolds in its outward forms and choices. It is therefore not surprising that animal brains have a precursor neurobiological network that bears a striking general correspondence. They entertain an inner dialogue like humans do insomuch as they analyze the species-specific information in their vocalizations.

In the case of synchronized movements in flocks of birds and schools of fish, we can observe the mechanics of telepathic communication made visible through the economy of biological resonance.

Such resonance can be achieved in humans through a deliberate synchronization of heartbeat, breathing, attention, and mind speed. Emillio Ferrer, a psychology professor at University of California, Davis, find that couples connected to monitors measuring heart rates and respiration. get their heartbeats in sync and they breathe in and out at the same intervals.

“We’ve seen a lot of research that one person in a relationship can experience what the other person is experiencing emotionally, but this study shows they also share experiences at the physiological level,” Ferrer says.

Most of us enjoy singing together –  it makes us happy.  But the practice of holotropic breathwork, developed by transpersonal psychologists Stanislov and Christina Groff goes goes far beyond the envelope of this degree of familiarity.  The word “holotropic” comes from the Greek words “holos” (whole) and “trepein” (to move toward) – meaning to move towards wholeness.

Groff’s exercises induce psychedelic states in humans without using psychedelics. Neural substrates have been repurposed to clinically access altered states of consciousness in group settings.  The resultant insights are completely non-sexual, which is the same result we’re aiming for here. “Neither male nor female” in the kingdom of heaven.

The critical dynamic of egoic consciousness is control, i.e., dominance. That’s why the will awakens slowly from the sleep of experience-driven individualism.  And the idea that our will no longer controls our environment may tickle a fear response in some. But if humanity is to survive the way it currently does business with life then a major mental upgrade is necessary.

Objective:  To create the biological coherence of field consciousness by synchronizing heartbeats.  The expected result is deep field awareness.

Instructions.  Everyone pairs up and comfortably faces their partner close enough to take each other’s pulse.   Continue the exercise until every person has paired up with another.*

1.  Take each other’s pulse at the same time.  This can be done with wrist or neck arteries – whatever works best.

2.  Regard your partner with pure appreciation and get some impression of what you look like through their eyes.  Feel their heartbeat.

3.  Now get some impression of looking at your bodies from above. (autoscopic imaging).  Feel both heartbeats originating from a common source.

4.  Create in consciousness the feeling, “One Heart, One Mind.”  Relax deeply.

The pulse will suddenly beat much stronger and your mind may briefly exchange location with the other person.  You’ll see what you look like without a mirror.

*First, learn how to synchronize your own heartbeat, at home, in two plexuses at once. Bunch the fingers of your right hand and the tail bone (coccyx) located at the bottom of the vertebral column. Place the bunched left fingers on the solar plexus.   In women, they say, the hand positions work better when reversed.

In any case, the pulse in one hand will predominate over the other, then it reverses as your attention shifts back and forth from one location to the other.  But suddenly the beats will go into sync- in the Eastern vernacular it’s known as a demonstration of “polarity” – and the strength and heat of the unified pulse jumps dramatically.

If a particular pair does not achieve heart sync in the exercise, then just agree to notice it and move on with the next rotation.  Other exercises can be applied to dis-create the unconscious stratagems of separation and avoidance that frame our norms of dualistic consciousness.   The books by Stephen Wollinsky such as “Trances People Live,” and “Healing Approaches in Quantum Psychology” will prove helpful to those wanting to dig deeper.

From the fiasco at our national borders to the wholesale poisoning of the environment, our every societal issue reflects a disconnection from the spiritual and altruistic roots of agriculture and culture. The infantilized shorthand of “left” or “right” in American culture leaves us with little more than a spectator’s role.

The trillions in 2009 taxpayer Bail-out for Banksters, like Mel Brook’s 1967 movie Springtime for Hitler, demonstrated money’s complete control over our two-party political duopoly. George Washington said this about keeping the public pitted against each other in his Farewell Address:

“The alternate domination of one faction over another, sharpened by the spirit of revenge, natural to party dissension, which in different ages and countries has perpetuated the most horrid enormities, is itself a form of despotism.

But this leads to a more formal and permanent despotism.  The disorders and miseries, which result, gradually incline the minds of men to seek security and repose in the absolute power of an individual, and sooner or later the chief of some prevailing faction, more able or more fortunate than his competitors, turns this disposition to the purposes of his own elevation, on the ruins of Public Liberty.”

So, at this point it might be helpful to note that one way to think about what consciousness is by looking at what it is not.  The next episode continues ideas taken from The Origin Of Conscious In the Break-Down Of The Bicameral Mind by Princeton psychologist Julian Jaynes (decd.).