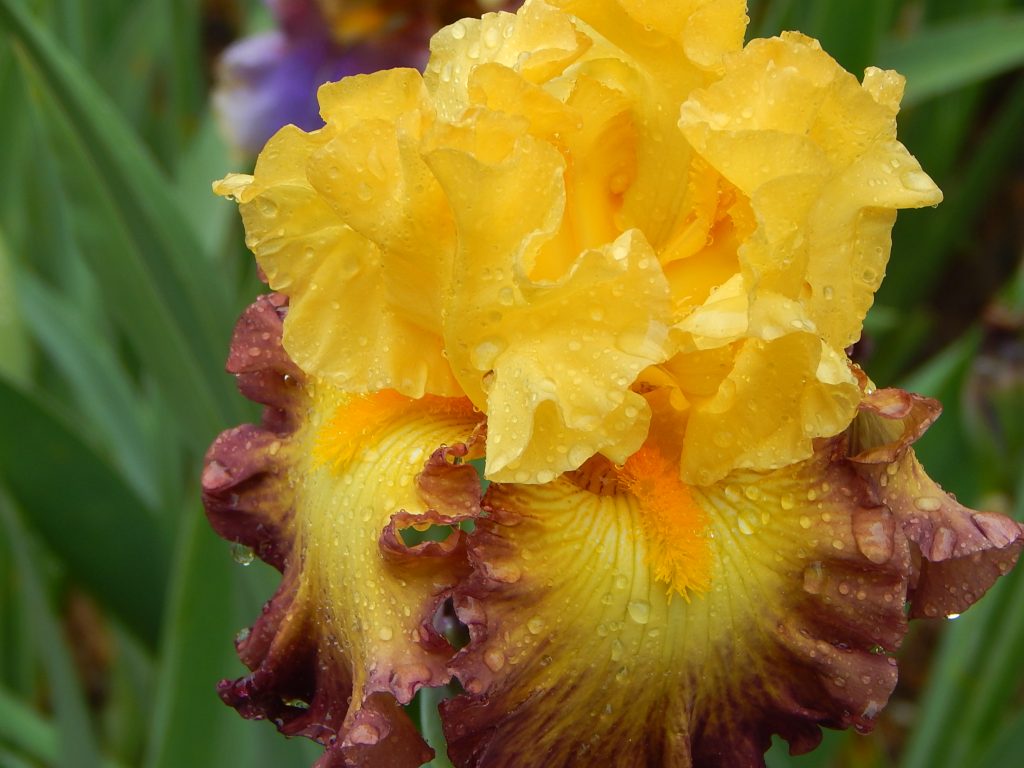 COLUMBIA, Mo. – According to Greek mythology, a golden-winged goddess named Iris traveled on a rainbow to bring messages from gods to mortals. Legend has it that colorful flowers sprung up at the end of the rainbow wherever she stepped.

“Today, the flower named in honor of Iris comes in every color of the rainbow and adorns yards and gardens everywhere with its showy flowers born in spring,” said University of Missouri Extension horticulturist David Trinklein. “A flower of contrasts, iris is very durable while maintaining its intricate and delicate beauty.”

More than 3,000 years ago, King Thutmose III of Egypt found irises growing abundantly in Syria and brought some back to his own gardens. For the ancient Egyptians, iris’ three petals symbolized faith, wisdom and valor. Today, its petals are known as standards and stand upright. In contrast, its three sepals, known as falls, droop downward, said Trinklein. The shape of the iris inspired the fleur-de-lis, a design often found on European flags and coats of arms.

The most popular garden iris today is the German or bearded iris. The latter name comes from the thick, bushy “beards” that appear on the falls and attract pollinators.

“By careful selection of bearded iris varieties, a gardener can enjoy a remarkable range of colors and a bloom season that extends for weeks,” said Trinklein. Some bearded irises bloom again in the summer or fall and are classified as “rebloomers.”

Irises grow easily. They require at least eight hours of direct sun and a well-drained garden loam. Transplant them at any time, although August to mid-October is preferred. Divide clumps when blooming declines. Under normal conditions, divide them every three to four years. Reduce the size of the clump by removing several small divisions, leaving part of the clump in the ground, or by digging the entire clump, improving the soil and replanting a few large rhizomes.

“Because of their hardiness and beauty, irises are among the most shared plants of gardeners,” Trinklein said.  “Relatively few iris are sold in commerce, since most gardeners get them free from their friends and neighbors.”

Irises are propagated through division of their fleshy rhizomes. A propagule must have at least one growing point (fan) attached to survive. When planting, expose at least the top third of the rhizome to the sun. Shallow planting is best. Space 12-24 inches apart. Plant closer for more color impact, but in that case you will need to divide them in two to three years.

Irises are heavy feeders and require proper fertilization Use a 6-10-10 fertilizer when needed. Avoid fertilizers high in nitrogen, which encourage soft, vegetative growth susceptible to diseases. A light application of fertilizer in early spring when new growth emerges and again a month after blooming is best, Trinklein said. Avoid applying fertilizer directly to exposed rhizomes.

Irises are susceptible to several insect pests. The most troublesome is the iris borer. It is a moth whose larvae feed on the fleshy rhizome, allowing bacterial soft rot to enter. Inspect iris often and discard infected plants. Other common pests include bud moth, iris weevil, thrips, slugs and snails.