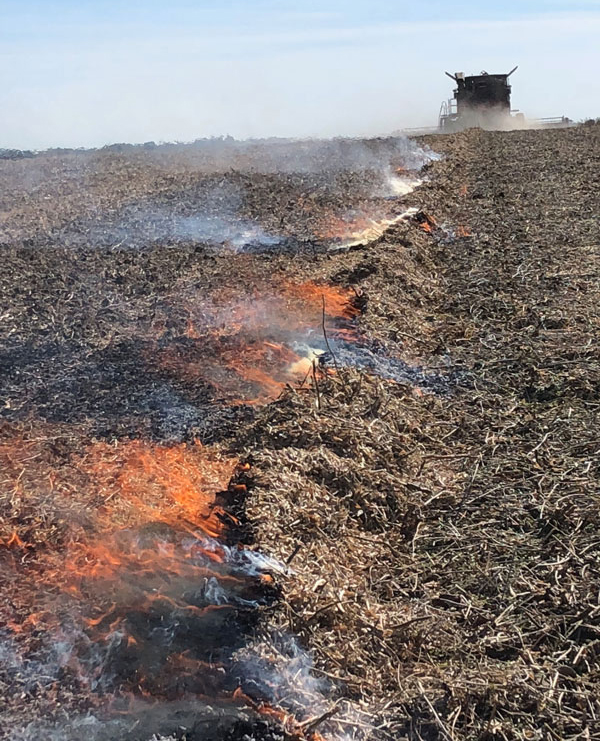 University of Missouri Photo. Narrow windrow burning is one harvest weed seed destruction technique being studied. Integration of non-chemical strategies to reduce the weed seed soil bank will be discussed.

New methods will be told July 9 at Pest Management Day at University of Missouri, Columbia. “This is not a year to skimp on controls,” says Kevin Bradley, weed specialist with MU Extension.

Farmers face many pests, from resistant weeds to insects and diseases found in their crop fields. Pests such as nematodes even lurk in the soil. Help in this changing fight is at hand.

MU specialists will tell of their research at the MU Bradford Farm, 8 miles east of Columbia at 4968 Rangeline Road.

The day starts at 8 a.m. with registration. Wagon tours start at 8:30. After lunch, farmers revisit plots and talk to MU staff. A book with plot maps will be handed out. A $10 fee covers lunch and teaching materials.

Bradley has more than a thousand plots of control methods. He tests herbicides even before they are released for farm use.

Now Bradley studies non-herbicide controls to stop weeds. One tour stop will show a device grinding trash out the back of a combine, which prevents weed seeds from germinating. That cuts weed seeds in the soil bank.

Bradley has research showing the need for heavy seeding for cover crops among other alternative weed controls.

“We’ve seen good weed suppression from cereal rye at seeding rates of 80 pounds per acre or higher,” Bradley says. “But if a farmer sows 40 pounds per acre, they shouldn’t expect the same results. It just doesn’t work that way.”

Herbicides are not overlooked, and he will show old and new chemicals useful in stopping weeds. That includes the new Enlist and XtendFlex soybean systems.

This year, special attention will be given to the importance of weed control on flooded crop ground that did not get planted. If left to grow weeds, the land can build a huge reservoir of weed seed that farmers would be fighting for years.

“Farmers may hesitate to spend on weed control if there is no crop there,” Bradley said. “But that could be a costly mistake in the future.”

On the insect side, Kevin Rice, MU Extension entomologist, will discuss impact of late planting on insect crop pests.

He will discuss effects of soil management on aboveground insect pests. That includes difference in tillage, no-till and rotations.

Despite unusual weather and planting dates, he sees no drop in Japanese beetle emergence. They will even survive flooding.

Kaitlyn Bissonnette, MU Extension plant pathologist, covers field crop diseases from planting to end of season. She works particularly on corn and soybeans. Management starts with seed and goes all through the growing season.

Her controls include fungicides, both foliar and seed-applied, and nematode protectant options.