Dennis Uhles, chairman of the County Extension Council, received word last week that Douglas County has been approved for a grant to fund an economic development specialist position here for two years.  Uhles was notified of the grant approval, in the amount of $28,160 per year.

Dale and Janice Ross have purchased Ava TV Clinic from Harley and Faye Allen and will assume operation of the business Friday morning.

The 1994 Douglas County Fair will open next Thursday, July 7, and will run through Saturday, July 9, with entertainment, carnival rides, livestock and general exhibits.

Tyler Miller is proud to announce the birth of his sister, Shalyen Nicole. Shalyen was born June 11 and weighed 6 lbs. 13 oz. and was 20 inches long.

A surprise birthday party was given for Mable Morgan June 24 to celebrate her 80th birthday.

Thought for the week: The things we sweep under the rug have a disconcerting habit of creeping out on the other side.

HUNTER CREEK –– Happy Birthday to Paul Pitts today who is celebrating at home.  All of Hunter Creek folks wish him a special day.

EVANS (by Theresa Brown) –– I got the shock of my life yesterday, Sunday, I woke up to the sound of a road grader.  They were grading my road on Sunday at that. First time for everything I guess.

A.G. Spalding and Bros., Inc., a subsidiary of Questor Corporation, today announced plans for a major expansion of its golf production facilities.  The expansion is budgeted for $4,000,000 and includes the opening of a new plant for the production of golf clubs.  According to Spalding president, Edwin L. Parker, the new production site will be located in Fort Smith, Arkansas, where the firm has purchased the building and property previously owned by the Ohio Rubber Company.

The Apollo 11 astronauts will have a tough time clearing immigration when they return from the moon in July.  After splash down, the men will ride in a hermetically sealed mobile home to a spaceage Ellis Island called the Lunar Receiving Laboratory. They will remain quarantined for at least 14 days in the 85,000 square-foot NASA facility at Houston’s Manned Spacecraft Center, the National Geographic Society says.

ROLLA –– A total of 205 high school students from Missouri and nearby states are taking part in a Careers in Science Institute this summer at the University of Missouri – Rolla.  Students from Ava participating include Sue Curry and Debbie Farris, June 8-13; and James Huffman, June 22-27.

Ava Country Club has recorded its fourth hole-in-one with a shot recently in league play by Joe Baker of Ava.  Baker shot the hole-in-one on No. 3 green, the second scored for this particular hole.

Larry Turton, son of Mr. and Mrs. Bob Turton of Ava, enplaned in Springfield Tuesday enroute to St. Croix, Virgin Islands to be a vacation guest of his sister, Mr. and Mrs. Nancy Bowman, Michele and Brent.

Mr. and Mrs. Max Valentine and granddaughter, Jayma Sue, returned to their home here Monday night after a week’s visit in Dennison, Texas, where they attended the 50th wedding anniversary of Mr. Valentine’s eldest sister, Mr. and Mrs. George McCoy.

Douglas Hicks, son of Mr. and Mrs. Raymond Hicks, was honored on his fifth birthday with a party Tuesday afternoon at the home of his parents.

Floyd Swearengin of the Dogwood community west of Ava was surprised Tuesday evening when his three daughters visited him on his 75th birthday. 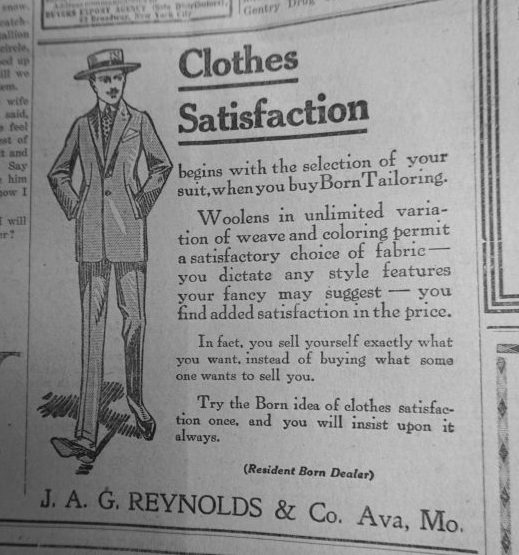 Washington, D. C. June 21 –– Congress and Washington were rife with rumors today that the war time prohibition ban would be lifted by President Wilson.  While the source of the rumor could not be traced and nothing official could be learned at the White House or in government departments, some of the leading “wets” in Congress and anti-prohibitionists in Washington were not at all downcast over another effort to have war-time prohibition revoked by Congressional action, and many expressed confidence in the truth of the rumor that the ban would be lifted by presidential proclamation.

A lone bandit entered the Bank of Neelyville, Mo., on Friday, June 13, took $2800 in currency and made good his escape.

An airplane flight in Ava on the morning of July 4 promises to be one of the greatest attractions of the day.  The commanding officer at Scott Field, Illinois, has agreed to send an airplane to Ava for a flight on July 4 upon certain conditions, and the businessmen of Ava are busy preparing to meet the requirements.   The businessmen have raised sufficient funds to meet all requirements in securing the government plane.  Other free attractions will consist of music by the Ava Band, a good ballgame, a parade, speaking, and a good program.

George, the 15-year-old son of Mr. and Mrs. Winsor Mason who live near the Banner School House in the east end of Douglas County, was instantly killed by lightning on Monday afternoon of this week.  The boy was upstairs at his home when the bolt of lightning struck the house.

A deal was closed this week whereby Cole Coffeen becomes the sole owner of the Ava Motor Co., having acquired the interests of L.H. Pettit, former partner in the business.  Mr. Coffeen is an experienced mechanic himself, and is fully competent to handle the business of the company.

Having failed to close the deal for the Frank Stewart residence property, Burney Kay this week bought the Fred Dyer property on Quality Hill.

A serious accident was averted by the quick action of drayman Paul Fletcher when fire threatened to explode the gasoline filling station at the Ava Hardware Co. on Friday of last week.  The dray was emptying gasoline from barrels into the tank and from some cause spilled quite a quantity of the gasoline.  A bonfire in front of Reynold’s store several feet away set fire to the gasoline running down the  curbing and within an instant the blaze was flaming around the filling station.  Fletcher immediately shut the faucet to the barrel of gasoline he was then emptying and succeeded in closing the pipe leading to the tank in time to avert an explosion.  Mayor Thompson dashed a bucket of water into the curbing which carried the flames away from the station.

CHICAGO –– Gigantic Strike – Within four days the country has witnessed the progress of one of the most remarkable events of industrial history.  In that time, an infant among labor unions has like a young Hercules extended its fingers around the serpentine tracks of railway steel and has paralyzed their strength in almost the whole western half of the country.

LONDON, July 2 –– The great Tower Bridge was formally opened at noon today by the Prince of Wales in the name of the Queen.  Tens of thousands of persons lined the route of the royal procession.

Three persons have been drowned in the railroad pond in Mountain Grove.

The lightning in connection with the wire fences is doing up a good many horses in Missouri.

An old saw mill near Seymour is haunted by ghosts who are not nervous and do not mind noise.

James Collins, Higbee man who was whipped by several women a year ago, has brought suit for $10,000 against the men whom he claims were abettors to the outrage.

Miss Figra Kirkbank of Ava recently was part of a party visiting Brown’s Cave at Bryant, and while there gathered a few twigs with poison oak, not knowing what it was. As a result she is now confined to her home.  Dr. Miller admits it is the most serious case of poison oak he has ever met with in his experience as a physician.

A boy soon discovers that stating his side on the case is “talking back” when his opponent happens to be larger than himself.

“I don’t mind a woman bein’ neat,” said old Mrs. Jason, “but one woman I used to know was just a little too neat for any use.  Why, that there woman used to take a couple of goldfish she had out of their tank every Saturday night and given em’ a bath.”

A man with a notion for statistics has been collecting data in regard to Fourth of July fatalities. He figures out that 25 persons in every million of our population lose their live annually either by reason of their own or some one else’s patriotism.