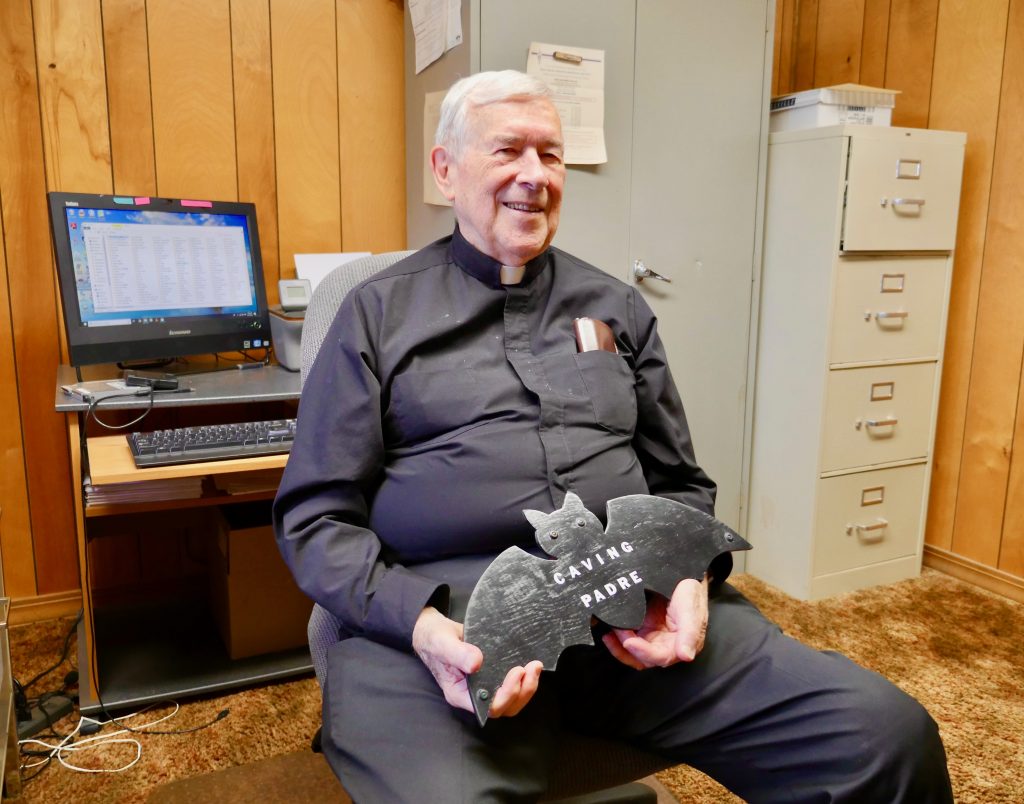 Father Paul “the Caving Padre” Wightman, Associate Pastor of Ava’s St. Leo the Great Mission Catholic Church has been exploring and mapping caves for 70 years. The State of Illinois recently named a nature preserve after him.

We all have them.

Those moments, minutes, hours or days that radically alter our lives. After encountering a defining moment, our lives shoot off in a noticeably different direction.

Some defining moments are common. Finishing school, getting married, starting a family, losing a loved one, or retiring can alter life for many of us.

There are also unusual defining moments. A random comment by a stranger. A realization at a factory workbench. A major car accident.

Father Paul Wightman, Associate Pastor of St. Leo the Great Mission Church in Ava, had an uncommon defining moment as a teenager.

“I read an advertisement in a travel brochure. It showed a fella crawling through a cave,” He recalled. “It said ‘He’s not an expert and you don’t have to be either. If you’re interested in exploring caves, write to the National Speleological Society.’ So I did. They sent me some information. I found out that I lived in an area that was full of sinkholes. And sinkholes can mean caves.”

Fr. Paul was in prep seminary in Belleville, Illinois at the time. A schoolfriend had an uncle. The uncle had a farm. And the farm had a cave.

The uncle showed the boys the entrance. There was a 15-foot drop. They rigged up a rope ladder and climbed down.

The cave’s passages led off in different directions. And Fr. Paul’s life did too.

Oh, he stayed in school. Got ordained in 1955. Began a career as a priest now stretching into 6 decades.

But that cave kept calling. And he kept answering.

As he mapped, and shared his findings with researchers, the significance of Fogelpole Cave came into focus. It proved to be the largest and most biologically diverse cave in Illinois.

“I was in the Fogelpole Cave with a biologist from the University of Illinois,” says Father Paul. “He turned over a rock and picked up eight little beetles. They were hardly bigger than a pinhead. He took them to an expert and they turned out to be a new species. Five of them are now in the American Museum of Natural History.”

“I had what they called a cave radio,” he says. “I didn’t design it. I built it from a magazine article that ran in an electronics magazine in 1960. You take the transmitter into the cave and then you can find the precise location on the surface above it.”

Having a cave radio set him apart from other cavers.

“When they opened up Jewel Cave in the Black Hills to the public, they wanted to put an elevator in,” Fr. Paul explains. “They had me come out with my radio and we used it to locate and build the elevator shaft.”

He also used his radio in Blanchard Springs Caverns in Arkansas, Meramec Caverns in Sullivan, Missouri, Fantastic Caverns in Springfield, and even Silver Dollar City in Branson.

“That little cave radio took me a long ways,” Fr. Paul chuckles. “It was a simple thing, but no one else seemed to have one ready to go.”

Fr. Wightman’s magazine-based defining moments have led to a new chapter in the history of the cave where it all started.

The State of Illinois ended up purchasing 27 acres that included the Fogelpole Cave.

And the land on top of it?

The 535-acre Seibert farm was purchased in 2014 by Clifftop Alliance – a non-profit conservationist organization.

In order to help protect the Fogelpole Cave, they wanted to make both parcels of property into a nature preserve.

Such things need names, of course.

So, on May 18th, the Paul Wightman Subterranean Nature Preserve was dedicated in Monroe County, Illinois. In addition to the cave, the Preserve also features a pavilion, restrooms, and walking trails.

Fr. Paul was on-hand for the ceremonies, entertaining the crowd with stories and tools from his early caving days.

Having 70 years of photos and documents, now digitized and on his office computer, helps him keep his curious nature active.

“I can’t always go in person,” he says. “But I can take trips just by looking through my photos. It’s easier than going physically.”

But he’s not completely retired from caving.

“In a couple of weeks I’m going back to Jewel Cave,” he smiles. “It’s now the second longest mapped cave in the United States. They are going to celebrate their 200th mapped mile. Since I knew the original explorers and helped with that elevator shaft, I want to be there for it.” 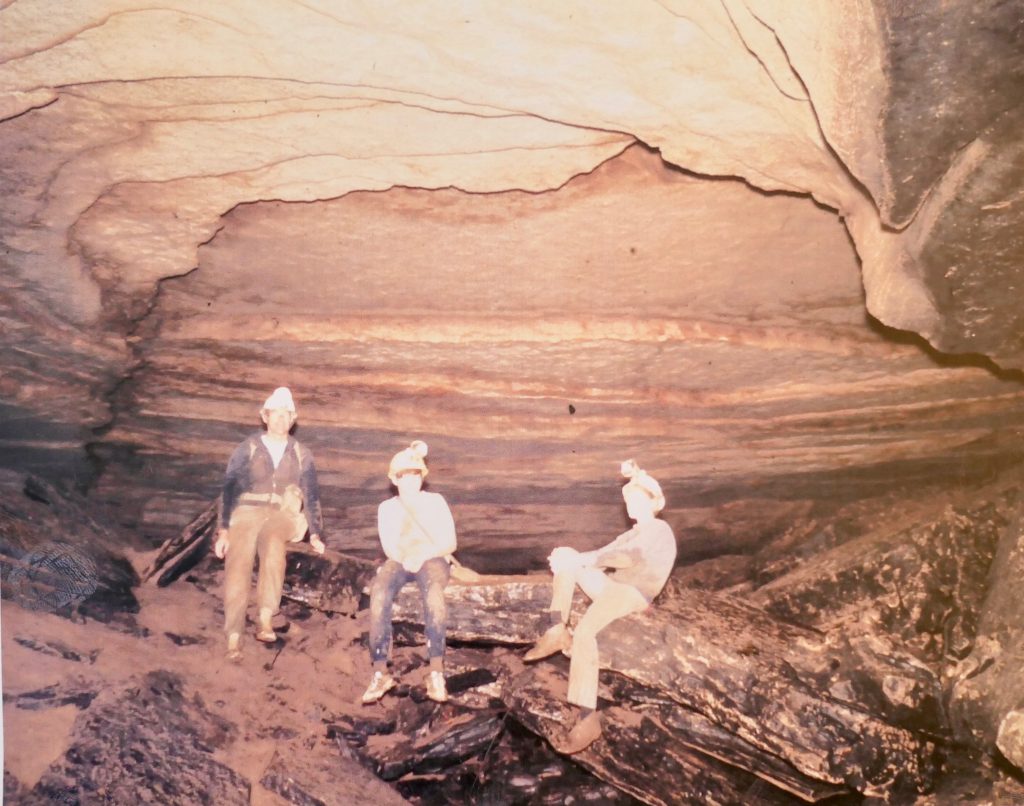 Submitted Photo A 1970’s photo of Father Paul in the Foglepole Cave with two students. 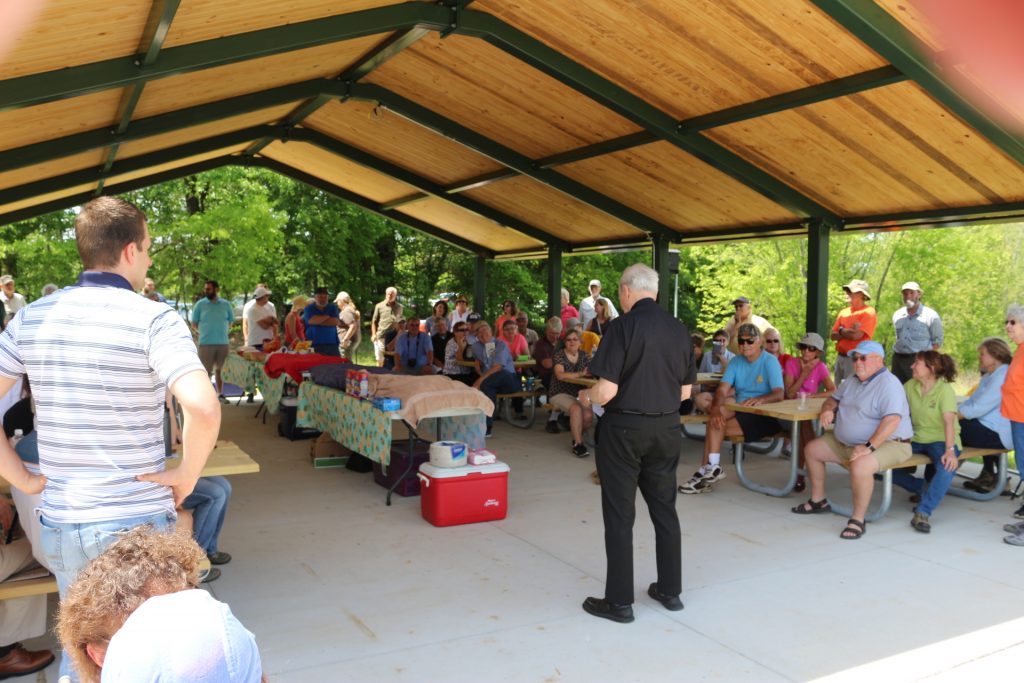 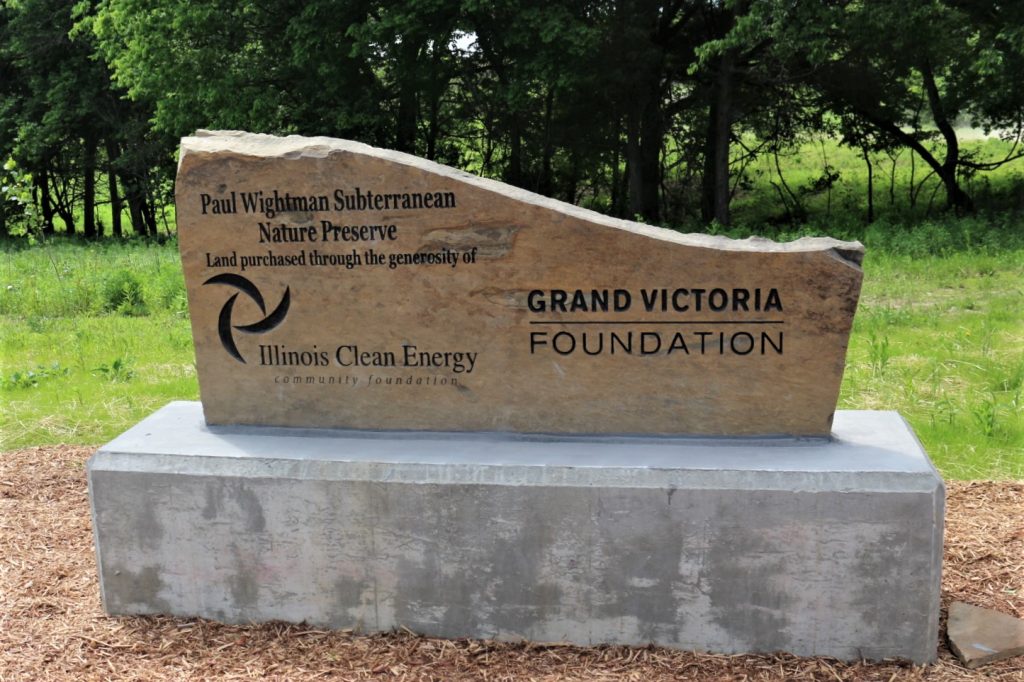 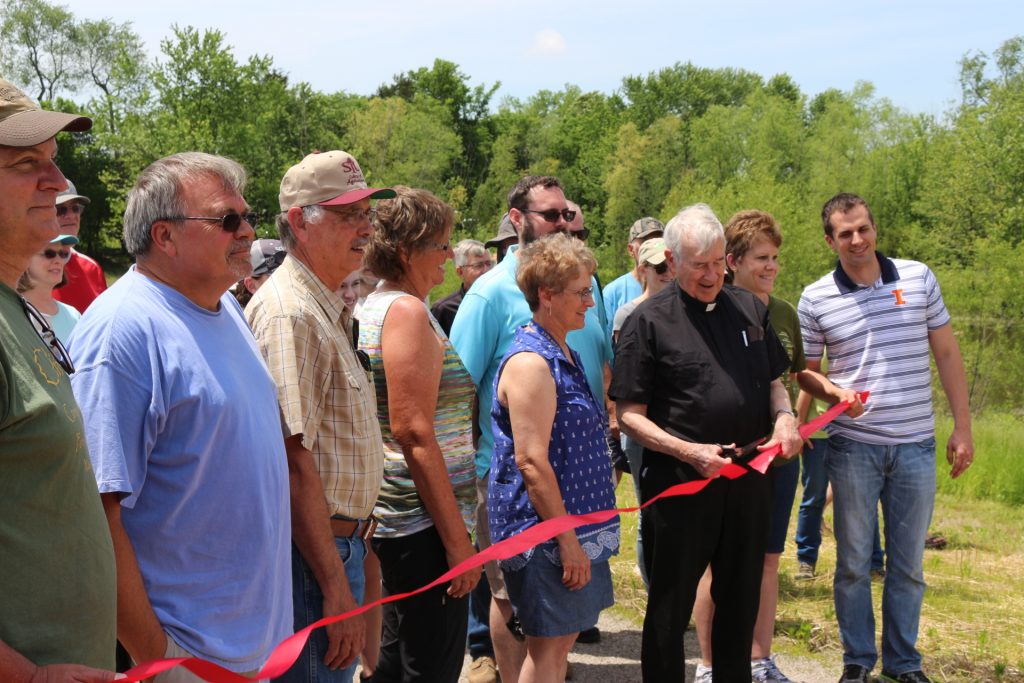 Willard Shaw/OMIUSA Fr. Paul cuts the ribbon to open the nature preserve named after him.