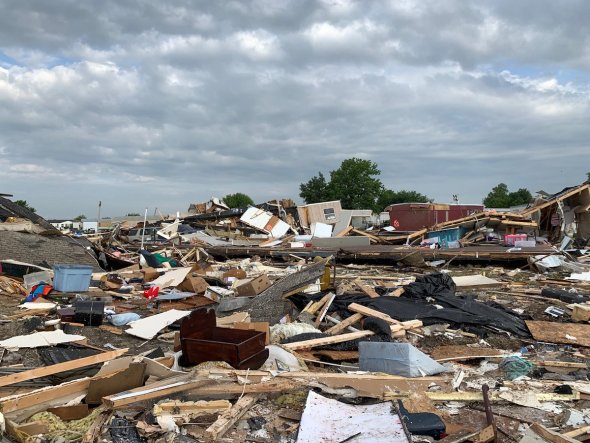 The El Reno, Oklahoma, tornado in late May was rated as an EF3 tornado by the National Weather Service. EF3 tornadoes are severe tornadoes with wind speeds between 136-165 miles per hour.

The El Reno, Oklahoma, tornado in late May was rated as an EF3 tornado by the National Weather Service. EF3 tornadoes are severe tornadoes with wind speeds between 136-165 miles per hour.

AccuWeather predicts that the number of tornadoes in June and July will be below normal and dramatically lower than the near-record-setting total that occurred in May.

So far this year, 1,113 tornadoes have been reported in the U.S., though those are just preliminary numbers and not confirmed. There were 1,169 tornadoes in 2018 and the U.S. annual average is 1,141. Tornado season typically eases up later in the summer and into the fall.

“Because of the pace of tornadoes in April and May, we’re in the higher percentile of tornadoes for the year, but now that percentile is going to go down a good bit faster,” said AccuWeather Lead Long-Range Meteorologist Paul Pastelok. “On average, the frequency of tornadoes goes down in June and July, but we think it’s going to be a big drop down.”

In May, 555 tornadoes were reported in the U.S. — though those figures are preliminary and not confirmed reports. The previous recorded high confirmed for May was 542 in 2003, while the 25-year average for May is 269.

“We eased back on our early predictions for June,” Pastelok said. “The pattern looks different from May with weaker, but still upper-level systems moving west to east and plenty of moisture that can produce showers and thunderstorms with heavy rainfall and occasional severe weather.

“We thought June would slacken off significantly from May, but now we think it will go even farther,” he added.