About all that is left of the old high school building is a pile of concrete, brick and plaster that remains to be hauled away.  Demolition of the building began in late May after the school board determined the building was unsafe. When the demolition is completed, the board will be ready to start back with new construction to replace the classrooms.

The Missouri State Highway Patrol has incorporated blue lights into the Emergency Lighting System of their patrol cars.

Pearl Exline, of Ava, celebrated her 94th birthday on Monday, and Tuesday she received a bouquet of 94 red roses from members of her family.  The roses were sent by a grandson, Steven and Ginny Norman, of Willow Springs; and daughters, Genieve Norman, Ava, and Mary Ann McCallister of Aurora.

Jarrett Dougherty, who has made his home in Lincolnton, Ga., for the past three years while playing drums for Jeff and Sheri Easter, is changing gospel groups and moving closer to his home town of Ava.  Jarrett will be moving to Kennett to join the Magruder’s gospel group, and will travel full time with that group as their drummer.

Brenda (Clinkingbeard) Caine, social studies teacher at Eldon Middle School, recently won MTV’s Community of the Future award for using MTV and cable services in her classroom in a unique and innovative way.

June Blakey, of Ava, has been awarded an Academic Honor Scholar award valued at between $1,500 and $3,500, to attend Drury College.

An Ava man is being held in the Hartville jail along with two Norwood residents in lieu of $4,000 bonds awaiting circuit court trials on charges of cattle rustling.

Two escapees from Fordland Honor Camp who had been sought in this area since May 26 whey they walked away from the prison are back in custody, reports Douglas County Sheriff Troy Hancock.

Teaching Home Economics at Ava High School this year will be Mrs. Mary Shank, 22, a native of Bolivar.

A 16-year-old Ava girl, Debbie Gipe, was released from St. John’s Hospital Monday after treatment of a right collarbone fracture and body bruises and abrasions suffered in a Springfield wreck early Sunday.  Officers said Miss Gipe was a passenger in a car driven by Dennis D. Neill, 18, Branson, when Neill apparently dozed at the wheel.  The car overturned beside Weaver Road near Fremont.

New Chief Justice of the Supreme Court is Warren E. Berger, appointed to succeed Earl E. Warren by President Nixon. Burger, a judge in the U.S. Circuit Court of Appeals in Washington, D.C., is said to be a “law and order” jurist who has been an outspoken critic of his predecessor’s direction of the nation’s highest court.

V.A. and Daisy Shull have sold the former Carol Moyer farm to Daonald Gilda of St. Louis. The new owners have already moved into their home. The sale was made through the local Strout Realty office.

Sp. 4 Joseph Hamby, son of Mr. and Mrs. Otto Hamby of Ava, is serving with the U.S. Army near Da Nang, Vietnam. He has been on combat duty about two months.  Sp. Hamby attended the Ava schools.

Just purchased trailer load of Su-Queen Hybred Sudan and Orange Cane. The Su-Queen Sudan has been proven over the past years in the Ozarks as a high producer.  Place your order Today – Heath & Son Feed & Supply.

Behind bars is one of the FBI’s Ten Most Wanted fugitives, Richard Lee Tingler, 28, a suspect in six Ohio slayings.  Tingler was arrested by FBI agents and local law officers on a Washita County, Okla., farm where he worked as a hired hand.  Tingler is charged with killing two teenagers in Columbus, Ohio, and is a suspect in the slaying of four persons in Cleveland.

GOODHOPE –– Miss Patsy Scheunemann is visiting this week in Salem with her aunt, Mr. and Mrs. Orville Swearengin and children. 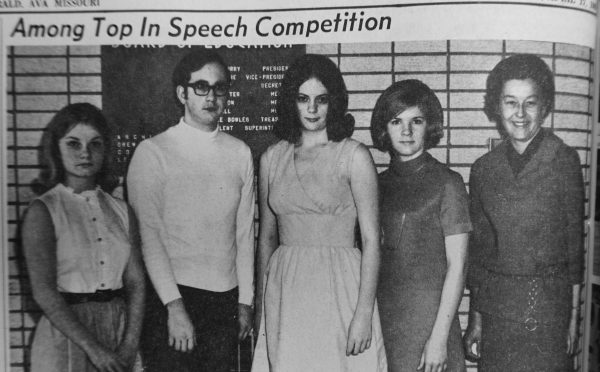 April 17, 1969 / Five Ava Students were rated among the top in the southwest district speech festival Saturday in Springfield. They are, from left, Pam Oxley, Robert Pettit, Annabel Briscoe and Judy Holt. At right is Mrs. Mona Decker, instructor.

Allied armies invading northwestern France have been keeping pace almost to the  hour with an invasion time table laid out a year ago, according to a report by United Press from Allied Supreme headquarters in London.  Friday last week, three days after invasion D-Day, the Allies were striking deep inland on a front of 100 miles of curving shoreline from the Seine estuary near LeHavre to the vicinity of Cherbourg on the Contentin peninsula, and that day General Dwight D. Eisenhower revealed that main landings of the invasion were made in the Bay of Cherbourg, north of Caen and at LeHavre.

Lieutenant Harry Stafford lands Flying Fortress in the North Sea with one motor.  Using a small hand compass, Second Lieutenant Arthur Finch, Milwaukee, Wisconsin, navigator on a Flying Fortress, recently guided his badly damaged bomber from Berlin to the English Channel on two engines, but when the third engine went dead the battered plane was forced to ditch in the water before reaching England.  The Fortress, piloted by Second Lieutenant Harry R. Stafford of Ava, Missouri, was caught in a terrific flak barrage and was riddled from nose to tail. Two engines were knocked out, the radio, oxygen, and electrical systems were destroyed and the entire bomber was ripped and torn by jagged fragments of steel.

An A-24 dive bomber was forced down at Goodhope at 8:20 o’clock Wednesday evening by a broken oil line.  The plane was piloted by Captain William J. Hosmer, stationed at the Walker Army Air Field at Victoria, Kansas.  He landed the plane “without a scratch” in an oat field on the Henry Melton farm half a mile west of Goodhope.

Mr. and Mrs. Ellis Mitchell and son, Jimmy, will leave Ava tomorrow for Lockwood where they are establishing their home.

A group of Ava women who belong to the local Eastern Star Chapter were in Springfield and were initiated into the organization of the White Shrine.  They were Mrs. Ben Davis, Mrs. Ralph Kerr, Mrs. O.A. Atteberry, Mrs. L.E. Reynolds, Mrs. O.M. Swick and Mrs. Russell Ferguson.

The annual graduation exercises held at the Wilson Opera House in Ava last Monday evening were witnessed by a large audience of citizens from all sections of the county.  Diplomas were issued to a class of 123 rural graduates following an elaborate program rendered by members of the graduating class, and the class address by Prof. John Boyd of the Springfield Normal.

Action by Congress on equal suffrage – subject of a fight of 40 years – ended today in adoption by the Senate by a vote of 56 to 25 of the historic Susan B. Anthony constitutional amendment resolution. The proposed amendment adopted by the House by a vote of 304 to 89 May 21 as the first act of the new Congress, now goes to the states, ratification by legislatures of 3/4 of which is required for its incorporation in the federal constitution.

After rejecting all bids twice previously the Postal Department has awarded the start Route Mail contract running between Ava and Mansfield to Tom Cornelius and Joe Baker at $2600 per annum.  They will use two Dodge Commercial cars on the route.

Two companies are now drilling for oil in Howell County.

In May 1891, B.H. Compton of Cedar Creek, picked up an ordinary plodding land turtle on his place, and carved the date 1891 upon its shell.  He did not see anything more of it for 21 years, but in 1912, he ran on to it again, and added the date 1912 upon its shell and released it.  Five years sped on and in June 1917, he again ran upon the same turtle with the two dates upon it.  Adding 1917 to the figures, he let Mr. Turtle resume his plodding way.  On May 30, this year, he found him once more 28 years after first finding said turtle, and added 1919 to the figures. He found the turtle within a radius of a quarter of a mile each time. Mr. Compton is reserving space on the turtle’s shell for  his children and grandchildren to add further dates.

Something doing in Ava July 4th –– And we want you to come and have a good time with us.  Our popular Sheriff Bill Miller has given us the free use of the courthouse and lawn. We are going to put up a big tent for speakers, and take all the benches out of the courthouse and make comfortable shady seats down on the lawn for friends.

John M. Mouser, 70 years of age, an influential farmer of Howell County, was instantly killed on Friday afternoon of last week within a short distance of  his home when he was struck by lightning.

Some words by constant use lose their meaning.  Take for instance –– Democracy.

The Hartville school board has adopted plans for Hartville’s new school building which is to be built at a cost of $25,000.

WICHITA, Kan., –– John Ward, member of the Dalton gang, was shot and killed yesterday morning at Bear Creek, near Lanear, Okla., by Deputy United States Marshal Tom Covington. Ward made a hard fight, and when he died ten empty shells were found at his feet.

Two black snakes, one 7-ft 9-in. and the other, 7-ft in length, were killed near Cabool lately by a tenderfoot.  He saw them in the top of a tree and fired 75 shots at them before he brought them down.

And now it is said that work on the railroad to Stone County will begin in the last days of June.

The dispute waxes warm as to whether or not these are 13 or 17 year locusts.

Coal has been found north, south and southeast of Chillicothe.

L. Bozarth of Taney County was arrested last week on a charge of larceny.  The theft was committed in Douglas County. The warrant was posted by Esquire Kester of Campbell township and the case is set for trial on the 27th.

The Fourth of July is near at hand and every citizen of Ava should prepare to decorate their buildings. There is every indication that there will be thousands of people in attendance and the county seat should set the example of a proper decoration for the day.

On Monday, of last week, the boiler of a sawmill that was operated by the Crain Bros., near Dora, exploded.  Two of the Crain boys, Geo. Blacksmore and Sam Scott, were present when the explosion occurred. Sam Scott was badly burned about his face, chest and arms, and was badly bruised and his  skull fractured.  He is not expected to live. No one else was injured.

Tandy Davis is building a new storehouse on the south side of the square which he expects to occupy with a stock of millinery goods.

Stockings are no longer plain affairs of solid black, but are as vivid in coloring and elaborate in design and trimming as the gowns of the season.  They come in every hue of the rainbow, and often all the colors are combined in one pair in tiny silk stripes, until the effect is dazzling.

The largest cave in Mexico, if not the world, has been found by a French engineer in the wilds of the southwest. In it he found a cemetery, proving that the cavern had been inhabited.

The electrical bicycle is cropping up in England. The weight of the batteries when filled with liquid is to be 44 pounds, and the whole weight of the machine is to be 155 pounds.