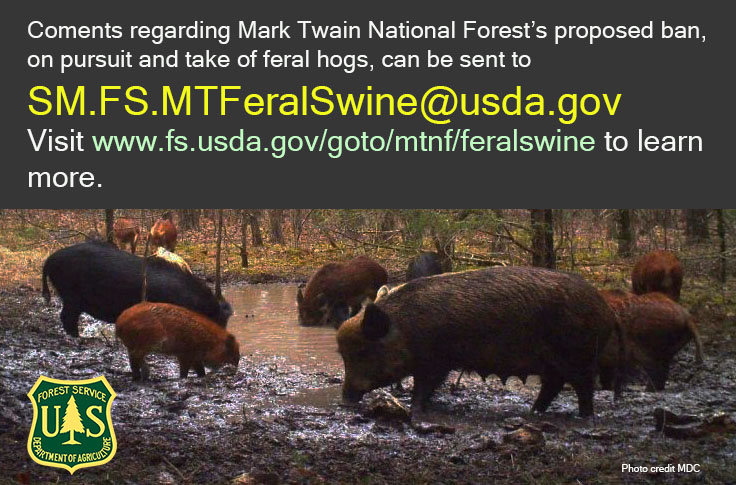 ROLLA, Mo. (June 7, 2019) –The USDA Forest Service is asking for public comment on a proposal to prohibit the hunting of feral hogs on the Mark Twain National Forest. As part of the comment period, two open houses are scheduled for the public to learn more about the feral hog problem in Missouri, the current interagency elimination strategy, and how to comment on the Forest Service’s proposal. Representatives from the Forest Service, USDA Animal and Plant Health Inspection Service (APHIS) Wildlife Services, and Missouri Departments of Conservation and Agriculture (MDC and MDA) will share information and answer questions.

“The open houses are an opportunity to learn more about what public land managers in Missouri are experiencing as they continue to work together to eliminate feral hogs,” said Forest Supervisor Sherri Schwenke. “It is important for us to hear from the public to help us make an informed decision on how we can be most effective in our elimination efforts.”

For more information, and to view the proposed Forest Closure Order, visit http://www.fs.usda.gov/goto/mtnf/feralswine. Although written comments will be accepted at the open houses, attending an open house is not necessary to submit official comments. The comment period began May 24, and comments must be received or postmarked no later than July 23, 2019 for consideration. Submit comments via email to SM.FS.MTFeralSwine@usda.gov or to the mailing address at:  Forest Supervisor; ATTN: Feral Swine Comment; Mark Twain National Forest; 401 Fairgrounds Road; Rolla, MO 65401.

Feral hogs are a public nuisance.  They destroy agricultural crops, hay fields and wildlife habitat while reducing water quality, contributing to soil erosion and the destruction of sensitive natural areas such as forests, glades, fens, and springs. Because feral hogs are highly adaptable animals and prolific breeders, their numbers grow at an alarming rate.  One sow can give birth to two litters of about six piglets twice per year, resulting in a population growth rate of about 166% per year. There are feral hog problems in 37 Missouri counties, most of which fall within the Mark Twain National Forest, and which threaten about 1.4 million acres of national forest land in Missouri.

The Mark Twain National Forest proposes to ban the hunting of feral hogs on the forest based on a request made by MDC, and as part of the Missouri Feral Hog Partnership.  In Missouri, 93% of the land is privately-owned and 7% is public.  This proposal is part of a larger effort to control an invasive animal species whose rooting, wallowing, and foraging behavior causes nearly $2.4 billion in damage and control costs to private landowners, and to the local, state, and federal agencies charged with managing public lands for the good of all.

When hunters pursue feral hogs, it complicates efforts to remove these non-native pests.  Hogs are social animals that travel in groups called sounders.  Hunting activities, particularly hunting with dogs, scatters the sounder and makes trapping efforts aimed at catching the entire group very difficult, because hogs become trap-shy and more wary of baited sites.  Examples from other states and from large areas of private land in Missouri show that only allowing state and federal professional trappers, and their contractors, to eliminate feral hogs yields the best results and decreases the desire for releasing and hunting feral hogs by the public.

The Forest Service will consider public comments to determine if the proposal should be implemented as presented, implemented with modifications, or decline to implement a closure.

Feral hogs are not wildlife. In Missouri, feral hogs are defined as any swine/hog, including Russian and European wild boar, that is not conspicuously identified by ear tags or other identification and is roaming freely on public or private land without the land manager’s or landowner’s permission.  Feral hogs eat acorns and compete directly with native wildlife species. Feral hogs also prey directly on the nests, eggs, and young of native ground nesting birds and reptiles, including threatened and endangered species. Feral hogs have even been documented killing and eating deer fawns, and actively hunting small mammals, frogs, lizards, and snakes.

Feral hogs are known to carry diseases such as porcine reproductive and respiratory syndrome (PRRS), swine brucellosis, pseudorabies, trichinosis and leptospirosis.  These diseases commonly cause abortions, infertility, low milk production, and high mortality in newborn domestic animals. The reintroduction of these diseases into domestic livestock populations could be devastating to the agriculture industry.