In 1959, residents attracted the Rawlings Corporation to Ava by raising the funds to build this building at 504 NW Springfield Road. It was the beginning of a 40-year relationship. Now the building is for sale.

The unheard-of boxer knocks out the reigning heavyweight.

A Caribbean country sends a bobsled team to the Olympics.

And we love them. We love to see underdogs come from behind and win.

Ava had the land. The easy access to roads. The people willing to work.

But there was a catch.

Rawlings didn’t want to build. They wanted to lease. Something in the 50,000 square foot range.

Ava didn’t have a building that big.

If Ava wanted Rawlings here, Ava would have to build.

Pay for it and build it.

They said it couldn’t be done. They said Rawlings would choose a bigger city.

But underdogs never listen to “them.”

It didn’t happen overnight. The stock program had to be marketed and advertised. People had to be convinced there was a chance of success.

But, over the course of three years, 1200 people decided to believe. In underdogs. In Ava.

By late 1959, the money was all in. The deal was struck. The building contract was awarded.

Rawlings was coming to Ava and bringing hundreds of jobs with it.

The underdog had won. 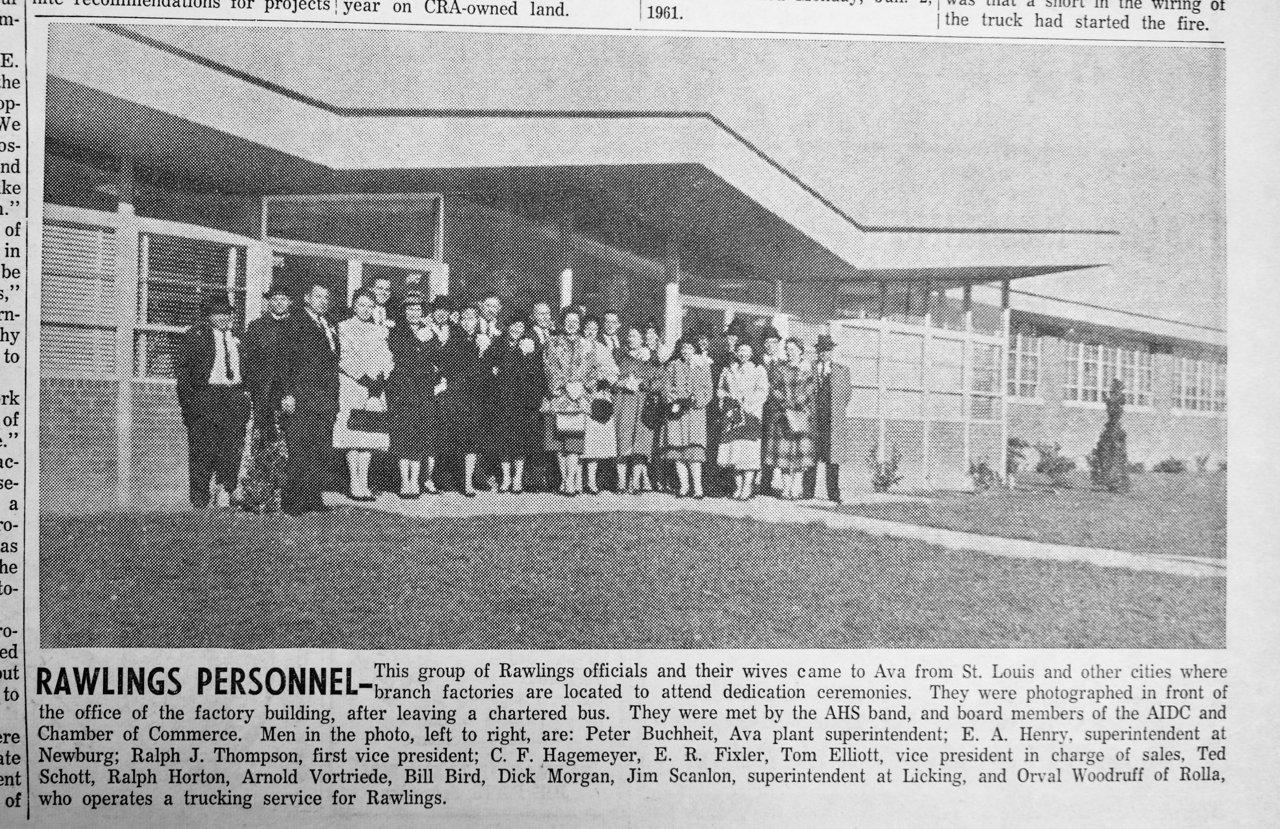 “Ava is the envy of the entire surrounding area,” said Forrest Plummer, then-President of the Branson Chamber of Commerce. “You have accomplished what most of us thought was impossible.”

Not everyone was happy about it.

“We don’t know precisely why Rawlings went to Ava instead of expanding in St. Louis,” penned a St. Louis Post-Dispatch editorial writer. “It illustrates a trend that is hurting St. Louis.”

Locally, it was all positive. The Herald kept readers excited about the building progress.

When the time came to hire workers, 250 people lined up in front of the new building.

On the day of dedication, Rawlings sent a chartered bus of officials and their wives from St. Louis. On Ava’s side, nearly the entire town turned out. The Ava Chamber of Commerce even told local businesses to close during the dedication, so that all staff and customers could attend the festivities. 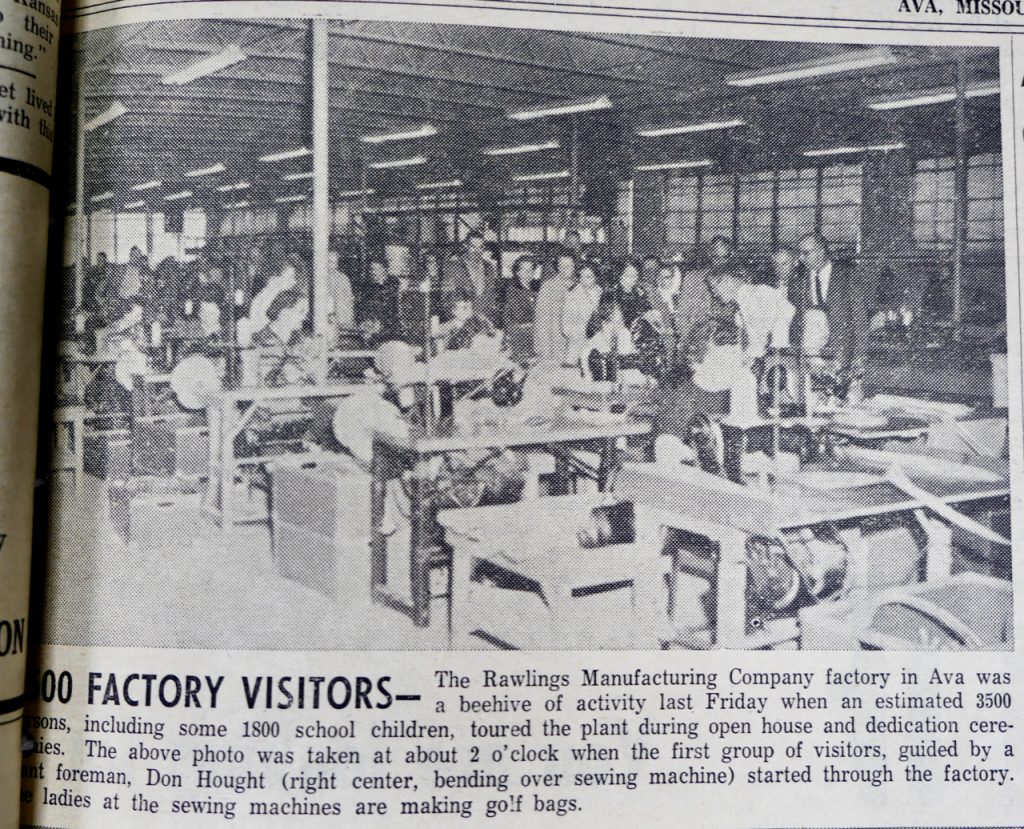 Schoolteachers brought 1800 students through the plant, contributing to the total of 3500 people wanting to see inside.

Ava gave Rawlings a key to the city. Rawlings gave Ava an award – a large gold football on a pedestal.

Local advertisers bought two pages of advertising in the Herald, welcoming Rawlings to town. Rawlings bought a half-page ad, thanking Ava for “the visible demonstration of your community spirit and your interest in continuing your forward movement in future years”.

In an underdog movie, this is where the credits would roll.

It was close, actually.

Read any well-researched history of the baseball glove, and you’ll read about Ava. There was a time when big leaguers were calling Ava to get their favorite glove reworked or recreated by the Rawlings factory.

On March 29, 2001, the end had come. “Rawlings Will Close Ava Plant” was the Herald front-page headline.

It wasn’t sudden. Work trickled to a halt. First some departments, then others.

And slowly, the building went dark.

In 2005, Ava agreed to purchase it from AIDC for $545K, making yearly payments until 2016. The Police Department moved there, using the former Rawlings office space.

In 2015, a company specializing in prefabricated wall panels approached the city council expressing a desire to set up offices, showroom, and production facilities in the building. The deal quickly fell apart, however, when the City learned that the company didn’t have sufficient funding.

The building hasn’t remained completely empty. Ava schools have used it as a “safe place”, where students could be gathered in case of an attack on the school property. Ball teams have also been inside for pitching and hitting practice. 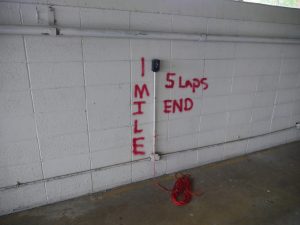 Michael Boyink/Herald
Markings on the wall let walkers know how many laps equals a mile.

Residents use the building for indoor exercise, walking the circumference of the former production area five times to log a mile.

The non-brick portions of the building, including the loading docks, are leased by Emerson.

Recently, the city council decided it was time to sell the non-leased portion of the building. They voted to contract with Action Reality to manage the process.

“The city wants to lose the liability,” says Action Realty’s John Sutton. “And we hope a buyer would bring new jobs to Ava.” 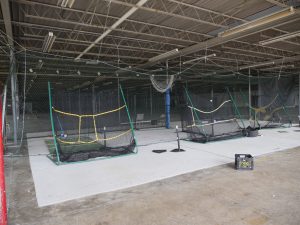 Michael Boyink/Herald Sports equipment used by the public schools sits at one end of the former production area.

Sutton says there has been interest. “I have a developer from St. Louis coming to take a second look,” he said. “I’ve had some other people calling as well.”

And the Police Department?

“We’d have to look at some options there,” says Ava Mayor Burrely Loftin. “We’ll get more serious about that when it looks like a sale is going to happen.”

They say history repeats itself.

If that’s true, maybe Ava’s chance to be a victorious underdog is just one real estate deal away. 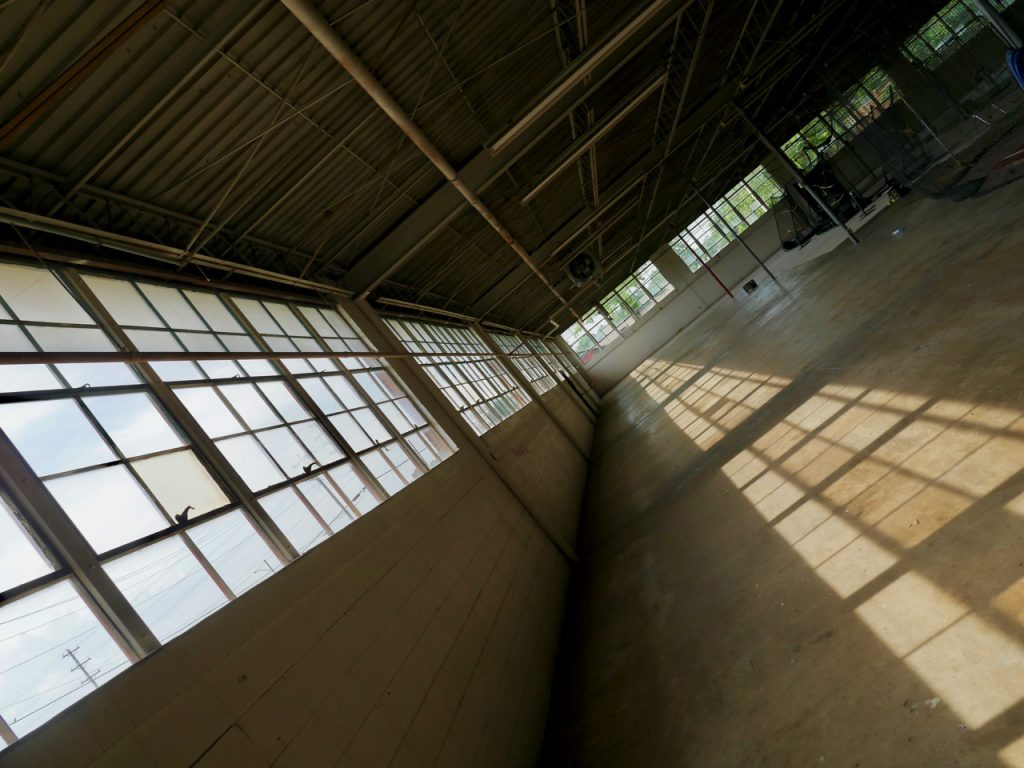