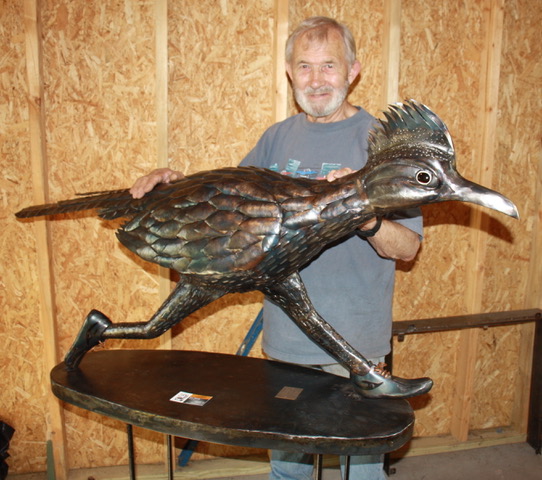 Thornfield artisan blacksmith Jim Davis’ pieces, left, like this roadrunner, reflect creativity, ornamentation and whimsy. In his creative metalworking, Jim Davis, above right, has three treasured antique anvils, all with a story to tell. 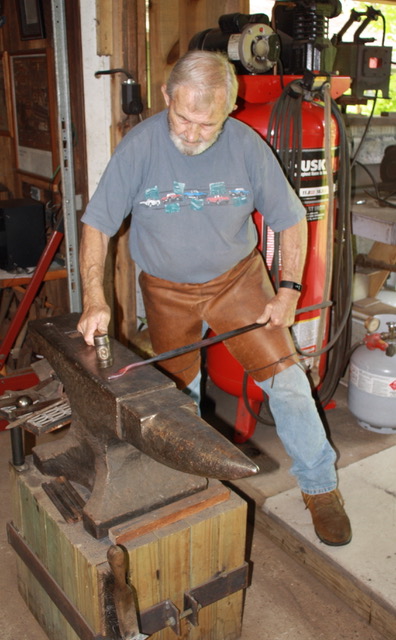 Blacksmiths were essential members of early Ozarks communities, performing necessary tasks vital to the daily life of settlers. Using anvil, hammer and forge, their skills in heating and shaping metal allowed them to build and repair tools such as plows, wagon wheels, knives and other implements that were essential to the life of people who were settling a new country.

Today, blacksmiths, while fewer in number, still work with metal, heating and shaping it in much the same way. But because of the ready availability of mass-produced tools, the products produced are often quite different. There is a still a demand for high-quality, handmade metal objects, but now blacksmiths are able to focus on specialty items — and in the case of one Ozark County man, the end result is art.

Jim Davis of Thornfield is reluctant to allow his creations to be called art because he doesn’t consider himself an artist. However, when examples of Davis’s work are displayed at the Ozark County Historium in Gainesville for the next several weeks, those who see it are going to know that this is not the work of an ordinary metalworker. Davis is a metal sculptor whose pieces reflect creativity, ornamentation and whimsy, all hallmarks of true art.

While many artists have moved to the Ozarks seeking inspiration, that was not the case for Jim and his wife, Carol, who came to Ozark County in 1975. They were, instead, looking for a small farm where they could introduce their children to a country life. Jim grew up in eastern Oregon, and Carol hailed from Florida. They met and married in California, and later lived in Colorado where they owned a motel. Yet they longed for a quiet, rural place where they could have some animals and teach their children about a more nature-connected lifestyle. While passing through Ava, they fell in love with the area and found their acreage near Thornfield. 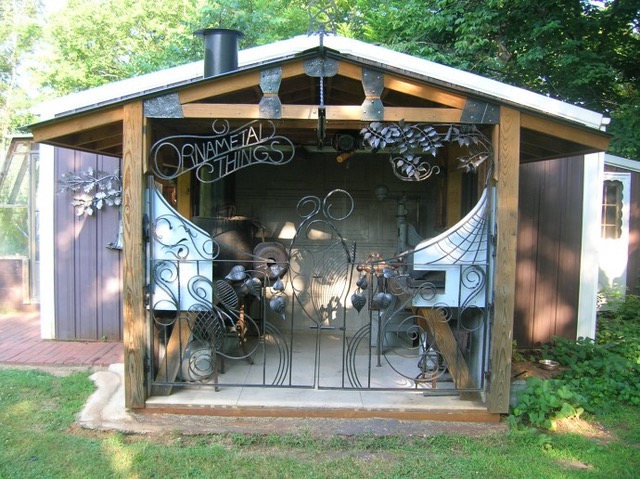 The entryway to Davis’ metalworking shop is a masterpiece of swirls, webs, leaves, words and other ideas he has combined to create an appealing welcome.

The pair of non-farmers had to figure out a way to make a living for themselves and their son and daughter, so they determinedly taught themselves skills, such as raising feeder pigs and then early weaners, cows and even cats. Jim also collected and traded antique tools, a hobby that turned into a profitable side business. They remodeled the small circa-1939 farmhouse, and Carol gardened and planted flowers, creating a haven of tranquility near the headwaters of the Little North Fork of the White River.

Ten years ago, a frightening accident was the impetus for a life change for Jim. He fell from a tree while hanging a swing for his granddaughter and broke his back, and the forced recuperation gave him time to think about what he wanted to do with the rest of his life. Jim drew and sketched as a child and had always enjoyed building and designing things, so working with metal seemed like a natural progression. Once he was back on his feet, metal working began in earnest, and according to Jim, it continues to be “the thing that gives me the most satisfaction.”

Jim, whose website www.ornametalthings.com shows fine examples of his creations, uses a traditional, coal-fired forge, as well as a propane-fueled one, depending upon the need. He has three treasured antique anvils, all with a story to tell.

“This one is really special,” he notes of a beauty weighing upwards of 450 pounds. “It was made for railroad work.” As Jim taps each in turn, he notes the different sounds created by metal on metal. It is music to this sculptor’s ears.

Jim enjoys making things, from farm gates to furniture to kaleidoscopes, for his family members, neighbors and customers who seek him out from far and near. He holds membership in ABANA (Artist-Blacksmith’s Association of North America), BAM (Blacksmiths Association of Missouri), the Ava Art Guild and the Area Art Club in Mountain Home, Arkansas, and regularly participates in shows and exhibits.

Jim Davis’s metal sculptures, which will appeal to children as well as adults of all ages, will be on display at the Historium from May 24 through June. The exhibit is free and open to all. The Historium, located on the west side of the square in Gainesville, is open from 10-2, Monday through Friday. For more information, call the Historium at 417-679-2400, or email at ozarkco1@ozarkcountyhistory.org. 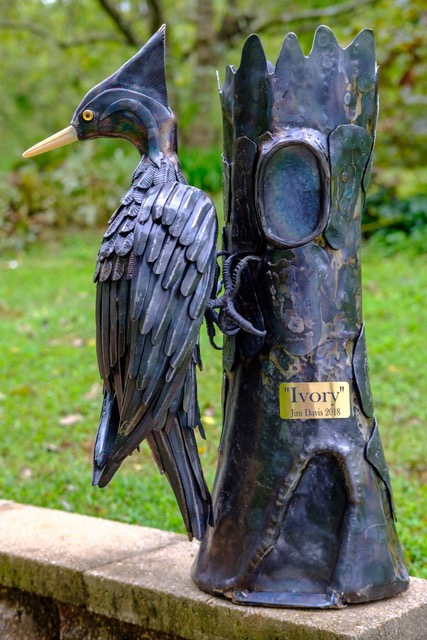 Davis’ artistic creations, like this woodpecker, appeal to children as well as adults of all ages. His work will be on display at the Historium from May 24 through June. The exhibition is free and open to everyone.