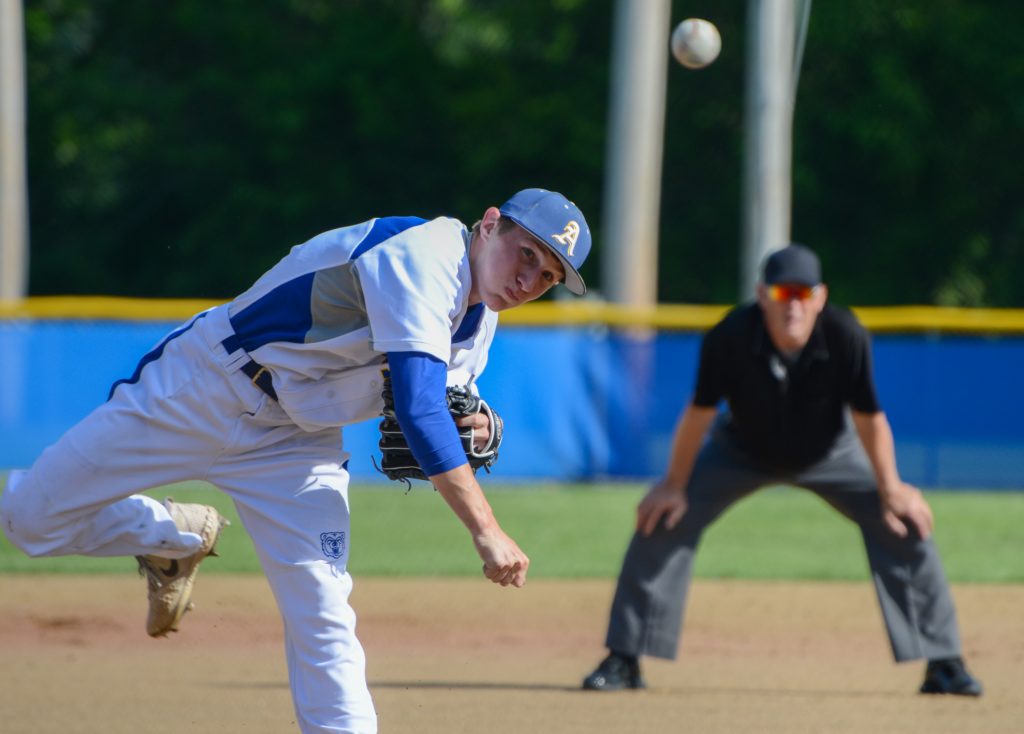 WESTPHALIA – “You have nothing to be ashamed of,” said head coach Rex Sawyer as he spoke to his players along the third base line after the 4-1 loss to Fatima High School in the MSHSAA Class 3 Quarterfinal game on May 15.

He isn’t wrong. The Bears have come a long way and had to work through a mid-season slump to get there. No one thought Ava would be on the map at the district tournament.

Then they set a new expectation. Winning as an underdog. Ava was the fifth seed at the Fair Grove tournament, beating the one, two, and four seeds to clinch the MSHSAA Class 3 District 11 title.

Then they did it again against Clever at Kerr field on May 22 to win the sectional go-ahead and the trip to Westphalia to face the Comets.

These young men are probably tired of hearing it, but listen to your coach. Two titles with just three seniors at the helm is a colossal success. Plus, baseball can be a funny sport.

The best team can drop a game to one of the arguably worst teams in the same league. It is no wonder why some players and fans can become superstitious. Look at how much can change from day-to-day.

On paper the Bears had the upper hand with a higher win percentage, and fewer runs allowed per game.

At the top of the first. – Ava played as the home team on a coin flip – Tom Emerich (.316 AVG, .888 OPS) flied-out to right field followed by a 4-3 grounder by Spencer Skyles (.284, .665). Caleb Johnson hit a chopper past the Fatima shortstop and reached first for the Bears’ first hit of the game.

Those two potential runs were needed by the Bears as the Comets fell into the same position with two outs in the first two plate appearances. Jaden Hoskins hit a shallow grounder and was put out on the 1-3 play from Ava pitcher Zach Richard (37 IP, 2.270 ERA). A dropped third strike gave number two at-bat Austin Wegman a shot at first but didn’t make it with the 2-3 play from Johnson (105 INN, .355 CS%) behind the plate.

It looked to be a typical 0-0 start before Josef Keilholz snuck a fast-moving grounder just past Ava second baseman Payton Evans for the Comets’ first hit off of an 0-2 pitch from Richards.

Gage Bax followed-up at the plate with a double on a liner to left field, putting Keilholz in scoring position at third and Bax just 90 feet behind at second.

The shallow backstop at the Comets’ field was made of concrete and had little padding to speak of behind the batting boxes. This made passed balls and wild pitches a real concern for any team playing in Westphalia.

The wall gives baseballs an extra bounce and plenty of velocity should it get past the catcher. Despite Johnson’s ability as a catcher, the senior still allowed 15 passed balls this season.

One of those came off the concrete and ricocheted away from Johnson as Keilholz brought-in the first run for Fatima. Bax was well-aware of the situation and trailed into the final 90-foot sprint.

Another mistake came for the now-flustered Johnson as he dropped another third strike and allowed Jefferey Cunningham to reach first, putting runners at the corners against the Bear defense.

The sixth in the Fatima order, Jake Boyce, got a good read on the first look from Richard. The result was a bullet to right-centerfield where Andrew Dalton (.943 FPCT) couldn’t get a glove around it.

Boyce picked up the RBI and Bax made the second run in for Fatima.

Richard was able to lean on the defense for a 4-3 grounder on the full count to stop the Comets from tacking up any more runs.

The Bears had their chance to make up for the mistakes in the first inning. Zack Miller (.309, .810) got a piece of the 1-2 pitch putting a grounder just past Fatima shortstop Dawson Peters.

He watched the rest of the top of the second from the bag at first.

The top of the order did fare well at the top of the third, either. Emerich was caught looking at the 3-2 pitch, hoping for the walk to first. Skyles followed with a looking called third strike on the 2-2 pitch. Johnson managed to grab a piece of the ball on a 1-0 throw, but the laser toward second was caught before it could find the grass.

Myers made first in the fourth but was forced-out with a throw to second, allowing Campbell reach first, trading the loaded base for an out at second. Miller was next up, and fate provided a double play setup for the Comets. Miller hit a fast-moving ground ball to the Fatima shortstop who was able to pick off Campbell at second and beat Miller to first on the 6-4-3 double play.

The Ava offense was being out hit and out run by the Comets. The Bears totaled six hits in the game, but nine hits from the Comets led to more scoring opportunity and another 6-4-3 double play on Emerich and Skyles in the fifth inning flattened the Ava offense after getting Dalton in for the Bears’ first and only run of the game.

Leadoff batter Zach Mendel was robbed of a base hit with a laser straight over second, but a leaping catch from Fatima’s Dean Hagenhoff shut that door quickly with the first out.

Dalton made first on a fielding error by the Fatima first baseman, Jaden Hoskins. A passed ball for the Comets’ catcher and another error at first put Dalton on third and Richard on first for the hopeful tying run in a 2-0 game.

Tom Emerich made an RBI single with a hit to left field, bringing Dalton through the final 90-foot sprint to home plate. Richard advanced to second on the play before Emerich and Skyles were both retired on the Comets’ second double play of the game.

The Comets answered Dalton’s run with two more of their own, both earned by Richard after another dooming field feature caught the Bears off guard.

Fatima High has a shallow, 305-foot fence. Knowing that high school athletes are capable of knocking pearls out of the part at 350-plus feet, this game was destined to have a home run happen for one of the teams.

Richard walked Wagman to first after getting a strikeout -three through five innings pitched – and also put away Keilholz for the second out and the hopes for keeping the score at 2-1 for the Comets. 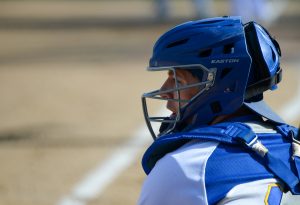 Bax came through for Fatima, sending a high-fly ball over the left-centerfield fence making the score 4-1. The pain could be heard in the groan of the Ava fan base.

A tiring Richard was showing on the mound and another hit from Cunningham allowed him to round the bases with a steal at second while Boyce was at-bat.

On the 1-1 pitch from Richard, Boyce sent the ball into deep left field. A fast-acting grab and monster throw from Campbell (.906 FPCT) came in-field just in time to be relayed to home for the put-out by Johnson at the plate.

The Ava defense had gone clutch on that play, but the damage had already been done with the two-run homer.

Top of the seventh and Ava’s last hope to advance to the “Show-Me Showdown,” Miller started the inning with a whiff on the 0-2 pitch. Mendel managed a walk in what appeared to be a tiring pitcher.

After a mound visit Dalton had a successful at-bat to put him at 2-of-3 for the evening as storms loomed in the forecast.

The clouds were becoming thicker, darker, and passed with higher frequency compared to the sunny and warm start of the game. With two on the Bears were looking for a break.

Richard flied-out with a shallow pop up to second and Emerich – in his last high-school plate appearance – shot one out to deep left-center and outfielder Austin Wegman stepped under it to end the Bears’ postseason.

At the end of it all, the Bears came through with two titles for the trophy case back in Ava with a season record of 18-6 with a now-seasoned core of youthful players who will compete for the lineup vacancies in the 2020 season.

Despite the loss in the Class 3 quarterfinal, the Bears bring home bragging rights in a new and tough District 11 assignment. Topping state-ranked teams like Strafford while mapping the way into champion-occupied territory for next year’s starting nine.

Wearing two crowns and sitting atop two thrones in the 2019 season, the Bears should take coach Sawyer’s words to heart and have nothing to be ashamed of after a successful season of Missouri high school baseball.

Young children wave and cheer on the Ava High School baseball team as they depart to Westphalia to compete in the MSHSAA State Quarterfinals on Wednesday, May 22, 2019, in Ava, Missouri. (Jason Hoekema/Douglas County Herald)