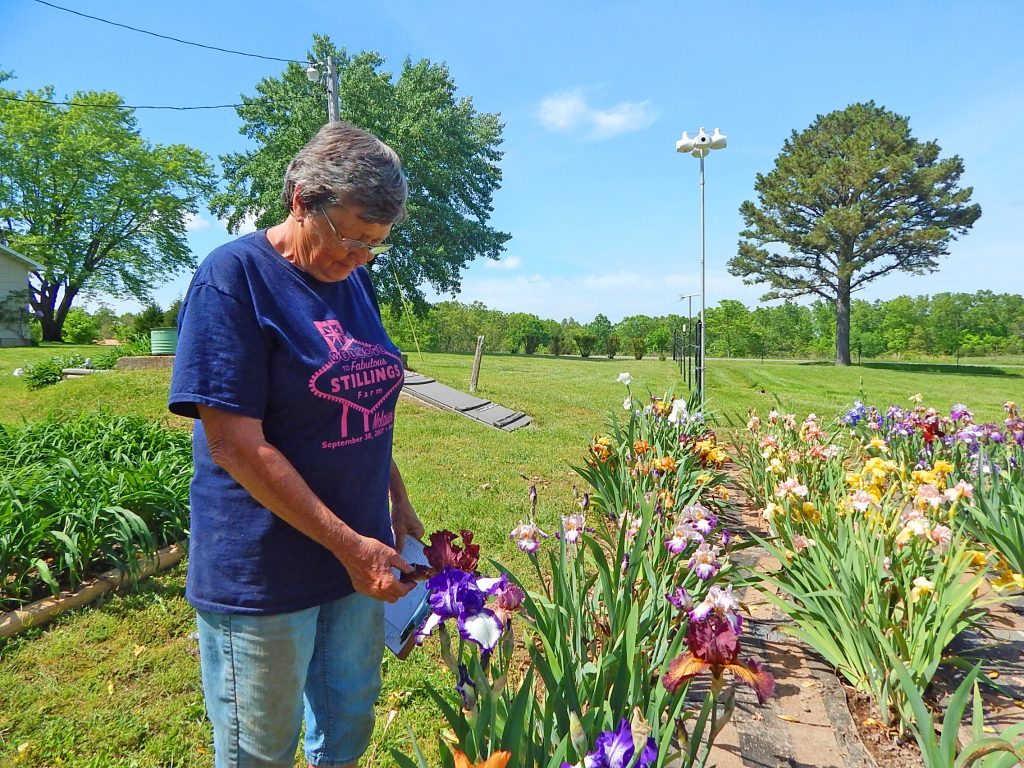 Linda Stillings enjoys blooms from more than 395 varieties of iris in her collection.

Driving west of Ava on Highway 76 in May, the Stillings’ farm is sure to catch your eye with a row of cheery and ruffly iris blooms flanking the fence. Look just beyond, and you’ll see a bed with hundreds of iris and you’ll suspect you are seeing something extraordinary. This is Linda Stillings’ exquisite collection.

Truth be told, Linda Stillings has more than 395, but she only counts and logs the named varieties – those with monikers like Kathy Chilton, Poppa John, Flash of Light, Doodle Strudel, Victoria Falls, and Gnus Flash. 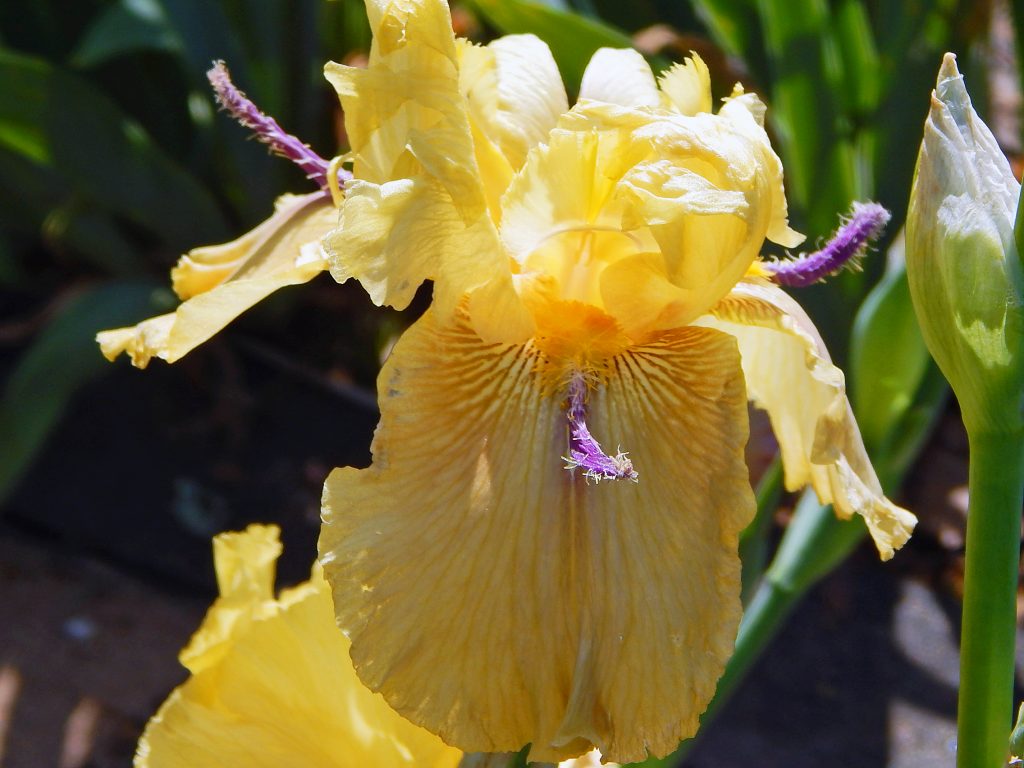 ‘Poppa John’ with its orange beard and unusual purple ‘horns’ that bend skyward, stands out in Linda Stillings’ garden.

Flowers are a slippery slope that starts with a yearning for color after a dark, cold Ozark winter. Stillings’ iris saga started with  annuals – the flats of petunias and other flowers that she would spend hundreds of dollars on every spring. Then she discovered daylilies – perennials that reward her every year with rich jewel toned blossoms starting in June. These are her first love. And yes, she has hundreds of named varieties of daylilies too. However, gardeners crave color earlier in the spring, and irises, which are named for the Greek goddess of the rainbow, satisfy that craving a full month ahead of lilies.

Her pursuits took her into Douglas County back roads where she collected her first irises from roadsides. These bloom now along the fence. Then she began acquiring named varieties which made their way into their own special bed.

As she established the beds of daylilies and then irises, she stopped buying spring annuals. Now the color on the farm is non-stop without replanting May through August with summer perennial natives finishing out the season in July and August.

And though she treasures her named iris, she refuses to spend a treasury to get them. 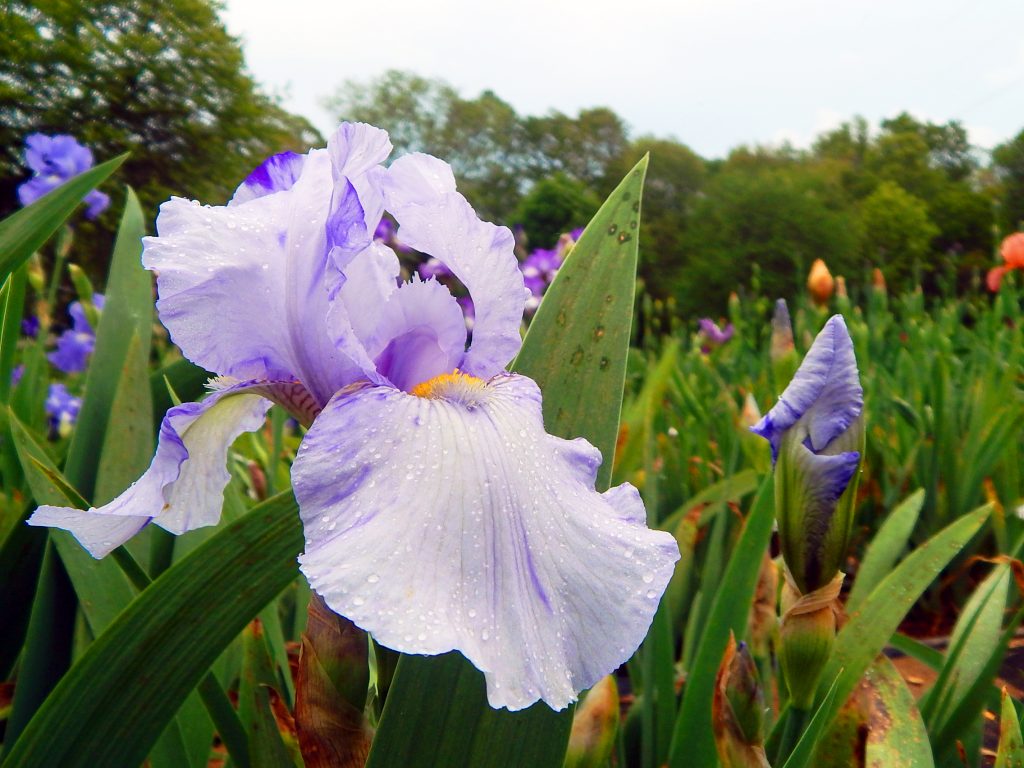 ‘Doodle Strudel’ blooms in Linda Stillings’ garden in spite of the rain.

That’s probably a wise move since a person can spend up to $100 for a single tuber of the latest, newest, and greatest introductions from iris breeders around the country.

Her sister Dorothy Fouard, who lives in Salina, Kansas, has more than 60 varieties of iris – most of them named too. She supplied some of the earliest specimens.

Stillings insists this iris collection is strictly her hobby. “I don’t sell them. I don’t want to be in business. This is my hobby. This is just a me thing.”

Now in her 70’s, Linda Stillings delights in the showy flowers that include ruffled varieties, bi-color varieties, speckled petals, variegated leaves, blossoms with contrasting edging, and striking shades from black to pure white – even browns and bronze – every color except a cherry red. Iris breeders have been pursuing a true red bloom for decades – it is the Holy Grail of the profession.

Drivers in the Ozarks will notice iris blooming at old home sites throughout the region. Many of these are descendants of the first named varieties. Their presence is a testament to their vigor since many have outlasted the homesteads where they were first planted. Floods and dozers have moved the tubers around in many places, but given good drainage and a little sun, they continue to delight viewers with purple, lavender, yellow, and bronze blooms.

“Iris can take care of themselves,” Stillings said. “Weeding is the hardest job of all. It’s an everyday process.”

With a gleam in her eye and a glance toward her husband Tony, she says, “I don’t need anymore. I’m running out of room.” Then, she adds, “I have told Tony that we do have five acres.”

Clearly, there’s still room for a few more, but they may have to wait since a great grand baby has entered the scene and it is clear that Stillings is smitten. When she speaks of the youngest family member her smile brightens even more and her joy is irrepressible.

Dedicated breeders have taken the historical iris, native iris and others and cultivated the named varieties that Stillings enjoys. She’s not alone in her enthusiasm. The American Iris Society has chapters in 24 regions across the nation. In Kansas and Missouri which is AIS Region 18 – 13 chapters celebrate these sturdy bloomers – the nearest one is in Springfield. A person could travel a lot touring iris farms and gardens. Stillings doesn’t.

She doesn’t go to shows or tour gardens elsewhere. She is content living the advice, “Bloom where you’re planted.” And with spectacular blooms like these, it’s good advice. 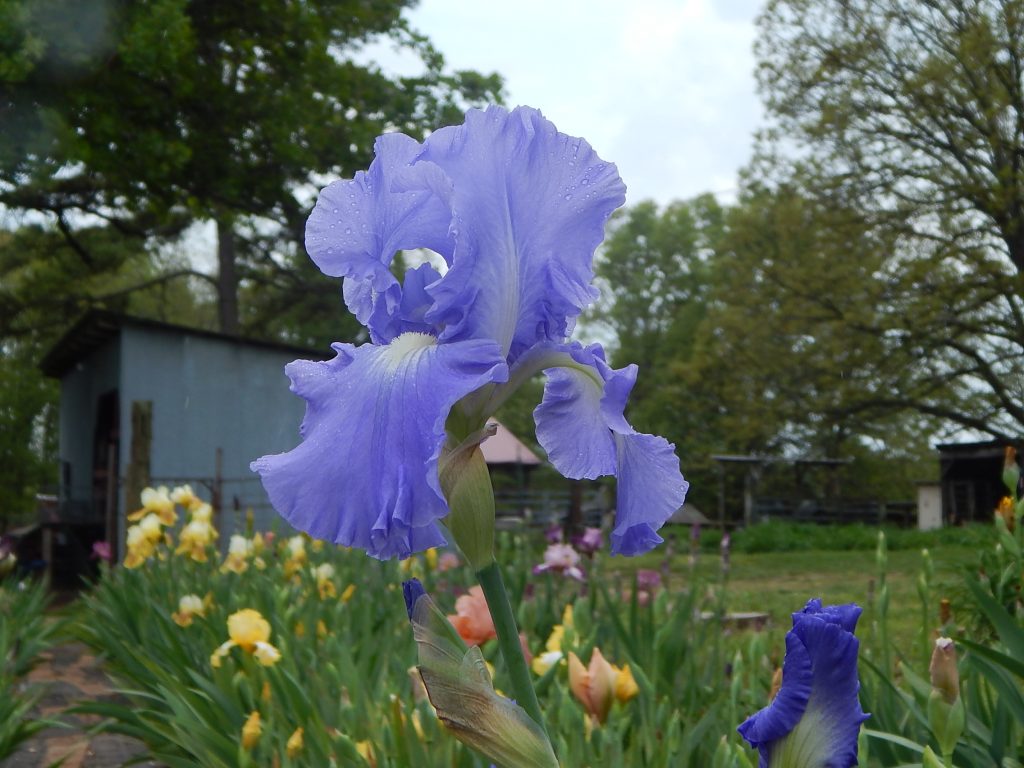 ‘Victoria Falls,’ with its white beards, defies the May rains.