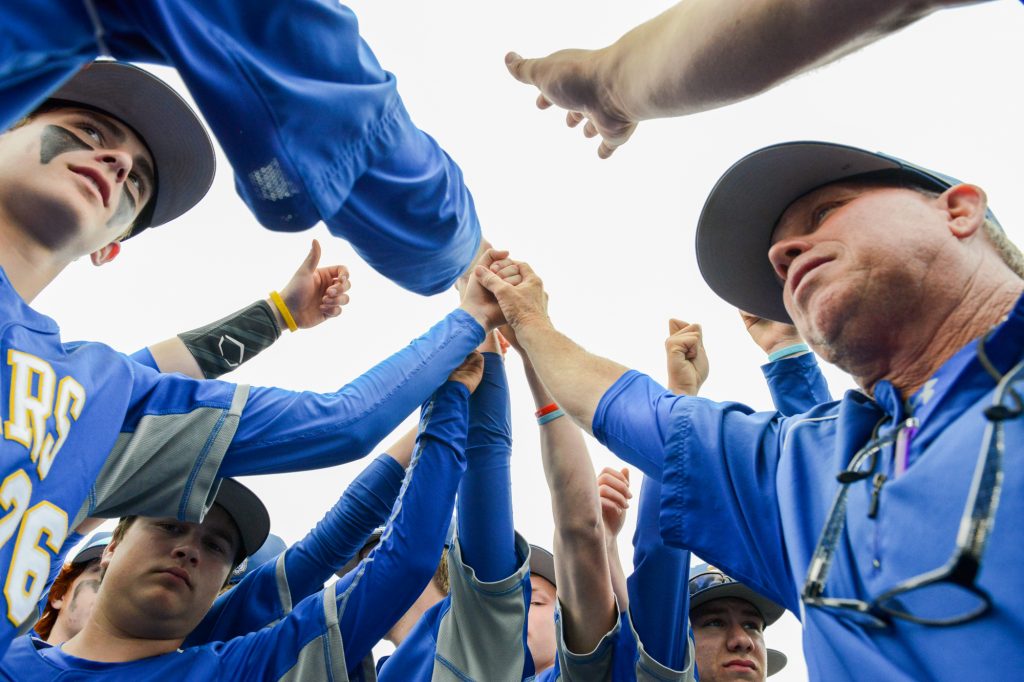 Head coach Rex Sawyer and the Ava High School baseball team break a huddle following a 1-0 win over Clever in the MSHSAA Sectional Playoff game on Monday, May 20, 2019, at Kerr Field in Ava, Missouri. (Jason Hoekema/Herald)

“Aim for the stars,” is the colloquial phrase used when telling youth to yearn and reach for their goals. Interestingly enough the Ava Bears have aimed and set their sights on the Fatima Comets after a win over the Clever Blue Jays in Monday’s Missouri State High School Activities Association sectional playoff game at Kerr Field.

The team went right into field prep mode knowing that a severe frontal boundary was approaching the Ozarks, raking the dirt and covering essential areas like the mound and home plate.

In the background playing on the field’s loudspeakers was Taron Egerton’s cover of “I’m Still Standing” by Elton John. A proper song track considering the Bears had topped the Blue Jays, 1-0, in a win-or-go-home Missouri baseball postseason.

Caleb Johnson (49.2 IP, 1.128 ERA) opened for the Bears after getting some rest from a testing district tournament last week. The break paid-off with six strikeouts and just five hits that the Ava defense (.905 Season FPCT) dealt with through six and one-half innings.

His first four pitches raised a few eyebrows after he walked Clever’s lead-off batter Trace Comer and allowed him to reach second on a wild pitch during Logan Peebles turn at the plate.

Johnson had already secured his first strikeout and pulled the second off of Peebles who whiffed on the 1-2 pitch.

The defense came up with a quick 4-3 play on a ground ball to end the top of the first and take their turn at bat.

Their start at the plate wasn’t spectacular, although Ava is known as a team that breaks-out in later innings. Emerich (.319 AVG, .908 OPS) flied-out to deep centerfield, followed by a pop-up off Spencer Skyles’ (.297 AVG, .694 OPS) to Clever’s third baseman, Hunter Eutsler.

Johnson managed to pull-off the walk on four-straight pitches and thieved second then made the third bag on a passed ball, threatening Ava’s first run.

Designated hitter Kayden Myers (.290 AVG, .871 OPS) hit a solid ground ball, but straight to Clever shortstop Nathan King who delivered on the 6-3 play at first for the third out.

It wasn’t until the bottom of the fourth inning when Ava made their first, and only, run of the game. Lately the five, six, and seven spots on the order have been the play makers in recent games.

Coupled with the big-hitting one-through-four spots held by successful hitters, the Ava batting order has the potential to make a move in one inning or the next.

Carter Campbell (.323 AVG, .755 OPS) found a hole in left-centerfield and let one loose. The ball was nearly caught, but a break for the Bears led to Campbell taking first. Zack Miller (.308 AVG, .816 OPS) made-good and reached for the second time, pushing Campbell to second and into scoring position.

With no outs on the board, Coach Sawyer turned to his small-ball game. Zach Mendel (.268 AVG, .665 OPS) made a successful sacrifice bunt to push runners ahead one more bag, Campbell standing just 90 feet away from home plate.

Andrew Dalton (.237 AVG, .592 OPS) was up next and hit a grounder into the grass past second. A fateful decision by Quinn Gundelfinger sent the play to first instead of taking a chance at cutting Campbell off at the plate.

With just two outs, Campbell’s run scored giving Ava the 1-0 lead. All the Bears needed to do was play defense and hope for some insurance runs to seal-up the game.

At the top of the fifth, Johnson had started to wane. Blaze Akins sent one deep into left field near the back fence but was held to first base after a quick throw-in by Ava left fielder Carter Campbell (.897 FPCT).

A sacrifice bunt from Sean Gilmore made for the first out of the inning, but the trade-off let Akins turn second and settle-in at the final 90-foot stretch, threatening to tie-up the game.

Johnson mustered a strikeout against Cromer on the full-count, but it was Campbell in left field who backed the senior pitcher up with a catch near the fence line from Gundelfinger.

Skyles was one for three on the night, reaching first at the bottom of the fifth inning. Unfortunately, he was stranded by a pair of fly-outs from Johnson and Myers after Emerich was retired.

Peebles threatened the Bears at the top of the sixth after a base hit off of Bryse Dodson (34.1 IP, 1.223 ERA) and made second on a grounder that went to first for the first out. An error on a pickoff attempt at second pushed him into prime real estate late in the game, leading at third with just one out for the Blue Jays.

The opportunity to convert an out into a run was eliminated when Clever’s Tanner Bradshaw shot one straight up for now-catcher Johnson to glove for out two.

Johnson would again shine behind the plate when he ran-down Hunter Eutsler on the dropped third strike for the third and final out in the top of the sixth.

Again, Campbell reached for the third time Monday evening. He was the go-ahead 1-0 run at the bottom of the fourth and an error landed him on first.

Then Miller got a piece of it but flied out to the pitcher, who in-turn picked up the double play picking off Campbell on his way to second. The two-out swing wasn’t what the Bears had in mind as they worked for another run.

Bats started talking with Mendel at the plate. On the 1-2 pitch he sent the ball right into a hole in left-centerfield and made first with ease. A liner into shallow left from Dalton pushed Mendel forward to second, but a grounder right to the third baseman by Zach Richards closed the inning and stranded two.

It was all up to the defense… or extra innings were at stake. Nathan King flied-out to Skyles in centerfield, but then Akins got a chance when Johnson dropped the third strike and reached first as Johnson struggled to pick up the ball.

The Blue Jays now had one on, threatening to end the work the Bears had put in through six. Bryse Dodson threw nothing but strikes against Sean Gilmore, two away.

Reminiscent of the immense pressure placed on freshman Andrew Dalton at the district tournament against Strafford, Dodson had to sew it up and keep Akins in check at first.

It took eight pitches to put away the final batter. Comer just wouldn’t go away, foul ball after foul ball on the full count. Dodson just needed to get him to chase one.

On the eighth pitch, whiff.

Comer had put the final touch on a strategic fielding mistake which allowed Campbell to score in the fourth inning. Mendel was thrown out at first for the first out in that inning, but the better play may have been at second to cut off Campbell before he made the final stretch to home plate.

In a defensive battle, the Bears came out on top. In four of the six and one-half innings, Clever had threatened. The Bear defense and pitching from Caleb Johnson and Bryse Dodson came through and left the Bears, still standing at Kerr Field.