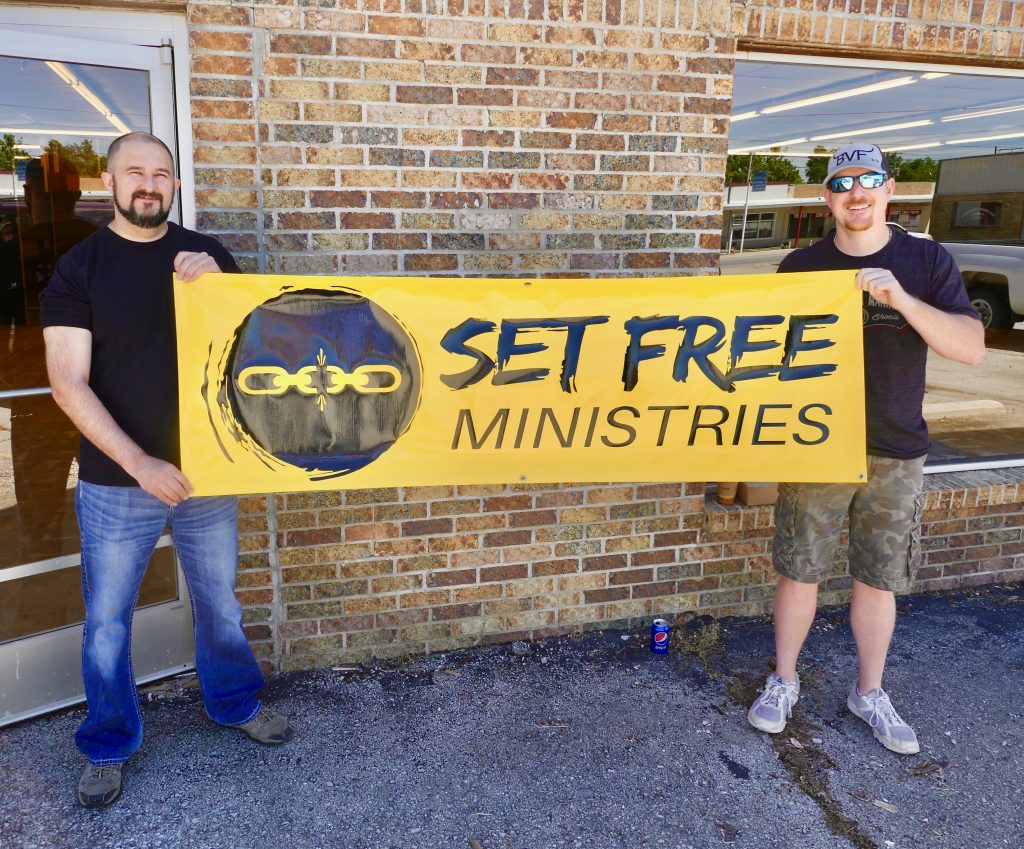 Michael Boyink/Herald Josh Browning (left) and Shane Weaver (right) display the banner for the ministry they are building at 212 N. Jefferson Street (next to Longdollar Furniture) in Ava, MO.

Two men meet for coffee. One, a pastor. The other, a jailer. Just a “let’s get acquainted” kind of meeting.

Basic pleasantries over, the pastor shares his heart. He sees a need and wants to fill it. The jailer has had a similar vision. They pray over it.

Rev. Shane Weaver, lead pastor of the Highway Church of the Nazarene in Ava, stands in the middle of the space.

“Up front, we plan a youth-oriented recreation/community center,” He said. “We’ll have some regular pool tables, air hockey, foosball, and ping-pong,” Weaver said. “Along with a snack bar, it will be a hangout area open during the week.”

Add in some bathrooms and that covers the front half of the space.

“We didn’t think it was this big until we got in here,” Weaver explains. “Back behind the retail area, O’Reilly had a full-on machine shop. We’re turning that into a worship space with a 30’ x 10’ stage and seating for 150-200 people.” 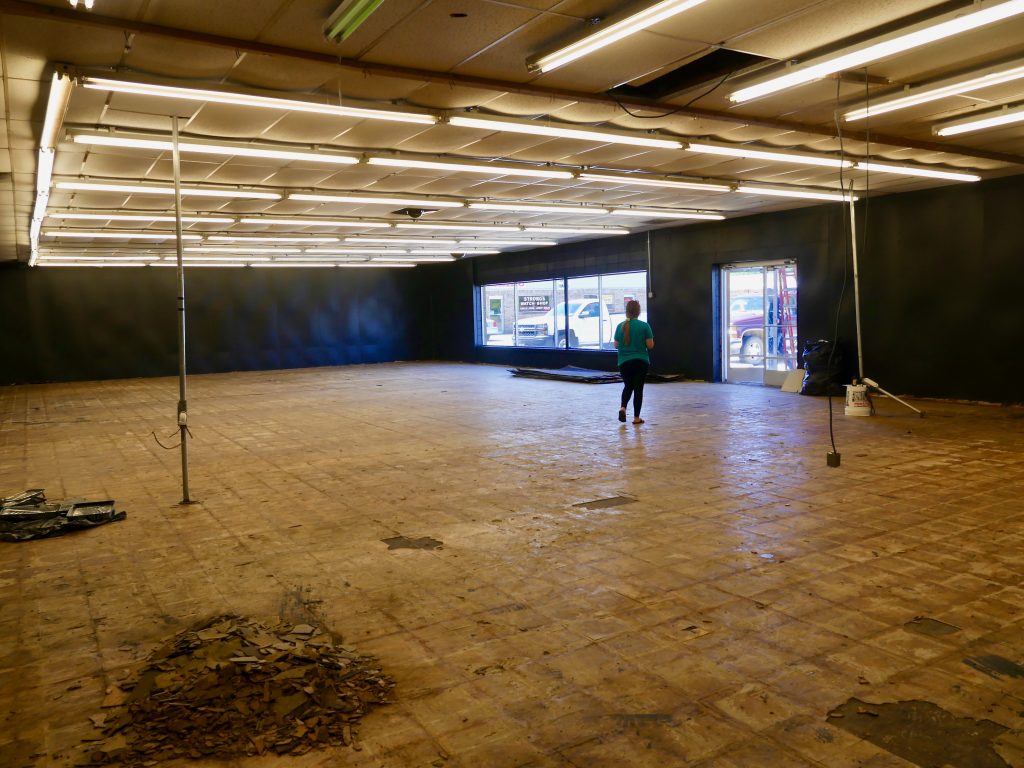 Michael Boyink/Herald The former O’Reilly Auto Parts showroom is being turned into a community center/game room.

And yet, the space continues.

At one end of the worship area will be rooms for childcare and nursing mothers. A computerized system will handle checking in and out of children.

The old cliché says “If you build it, they will come.”

With the building plans figured out, who is “they”?

“I had an inmate recently who got on fire for the Lord,” Douglas County Jail employee Josh Browning said. “She said she was never going back on drugs. She wanted her kids back. She had all these amazing things going for her and in my heart I’m thinking ‘she’s got this.’”

“One week after getting out she’s back with new drug charges,” Browning continues. “I asked her what happened? She said she got out of jail and the person who picked her up offered her drugs. So often they go home to a person who shoots them down and tells them they can’t do this. They lose their momentum. I wanted to be able to tell them about a group of people who would help them stay on the right path and a place where they can stay busy. And give them a way to give back to the community. And keep the momentum going.”

“We want this to be a place where it’s OK to not be OK,” adds Weaver. “No matter if they are coming in off the streets, addicted whatever. Meth, prostitution, it doesn’t matter. This will be a judgment-free zone. We want to come alongside them and love them. We want to see people set free in Jesus’ name.” 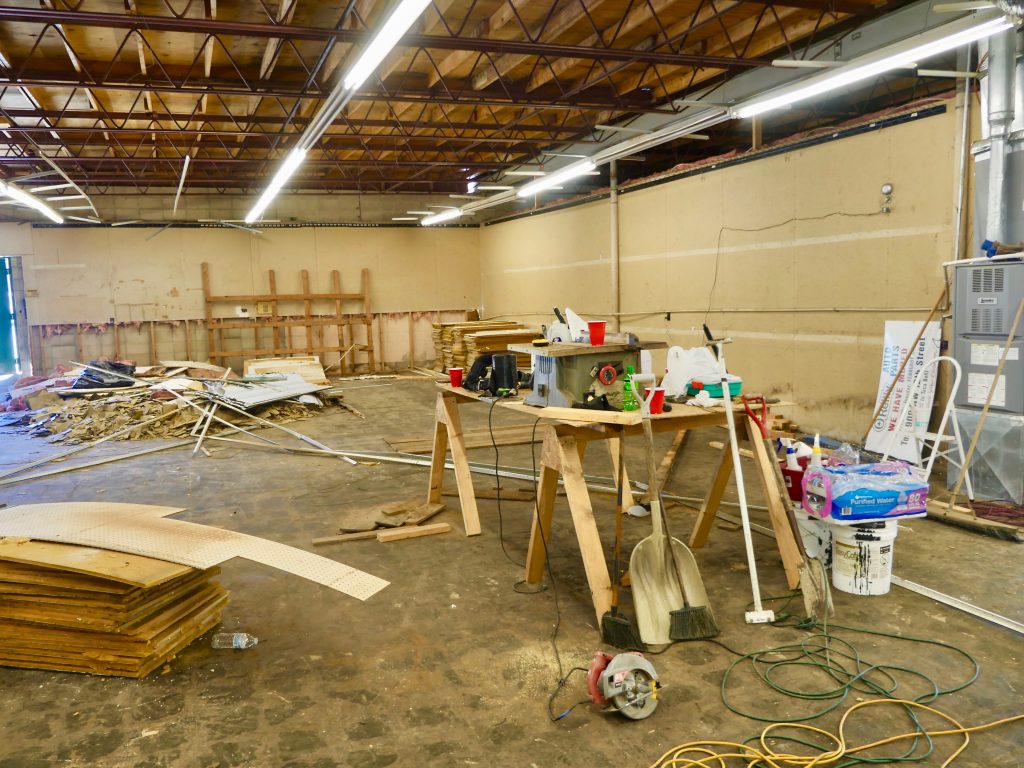 Michael Boyink/Herald The rear portion of the 8000 sq. ft. building is slated to be a worship facility with stage, projector, and seating for 150.

Is Set Free a church?

“This is a community effort,” says Weaver. “I’m already the pastor of a church and I don’t need another one.”

“It’s a kingdom thing.” adds Browning. “It’s not about any one church.”

Other churches have already pitched in with work on the building.

“I had to come down and open up the building so 8 guys from Ava Assembly of God Church could come in and work.” says Browning.

The management and administration of Set Free are still coming into focus.

“We have a leadership board of 14 people,” says Weaver. “We have an account at Great Southern. That account and the building lease is in Highway Nazarene’s name so it can be under their 501(c)(3) status. But we are trying to operate as autonomously as we can. This is not a Highway effort. I haven’t even fundraised at my church for this.”

Set Free is hosting their first formal fundraising event on Saturday, May 25th from 10 a.m. to 3 p.m. in their parking lot at 212 N Jefferson St, Ava.

Activities include food, bounce houses, dunk tank, water games, a dessert contest, and a silent auction with all proceeds going towards building renovations, equipment, and supplies for the ministry.

“The event will be as big as the community wants to make it,” says Josh Browning. “If the community stands behind us and gets the momentum going, then we can move forward quickly before people lose interest.”

“Momentum is huge,” adds Shane Weaver. “I’ve heard people say the don’t see the excitement. They feel it. They can feel something happening in and around Ava and its people.” 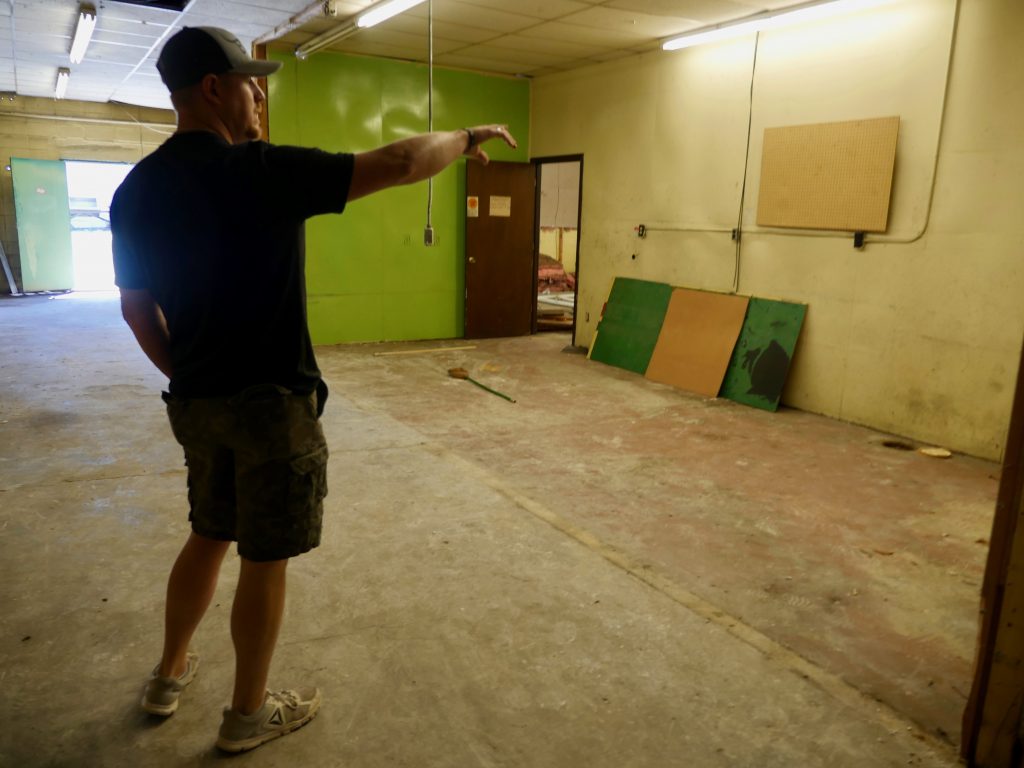 Michael Boyink/Herald Shane Weaver lays out his vision for a secure childcare center inside the Set Free facility.