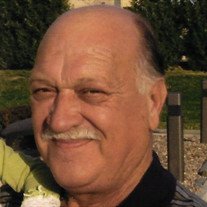 A Celebration of Life was held at 1:00 p.m., Thursday, February 28, 2019 at the Walker-Nadler-Fuller Funeral Home, 1720 S. St., Lexington, Missouri, 64067.  Memories of Billy and condolences for his family may be left at www.nadlerfullerfh.com or on our Facebook Page.

Billy was born on October 24, 1946 in McClurg, Missouri, to Earl Otto and Wanda Josephine (Robbins) Engelhardt. He graduated in 1964 from Bradleyville High School in Bradleyville, Missouri. Billy worked for the Bill Kaiser Co. as a sewing machine specialist for 30 plus years. After retiring from there he continued working for 10 plus years at the Missouri Sewing Machine Co. in Kansas City, Missouri.

On July 28, 2012 he married Patricia Kay (Lorantos) Engelhardt in Laurie, Missouri. Billy enjoyed spending time with his family and friends and could be found having the time of his life at the lake, boating, water skiing and fishing.

In addition to his parents, Billy was preceded in death by a daughter, Lora Grace Engelhardt; and a grandson, Chase Engelhardt.

A memorial service in Theodosia is being planned for a later date.