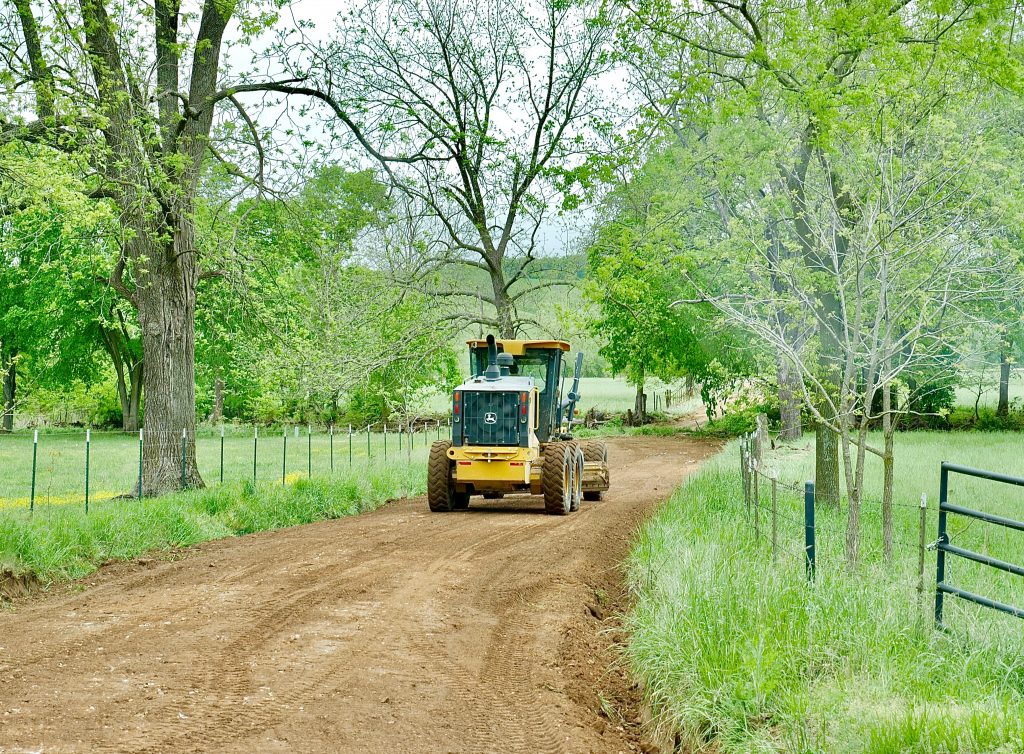 Michael Boyink/Herald A Douglas County grader works near the intersection of CR408, CR406, and KK highway on Friday. The intersection was flooded and blocked by trees after the recent storm in the Ozarks.

That’s certainly the case in Douglas County. After receiving approximately seven inches of rain on April 30th, many local roads were flooded to the point of being impassible.

Conditions have improved, but some local roads remain impassable due to damage the floodwaters left behind. 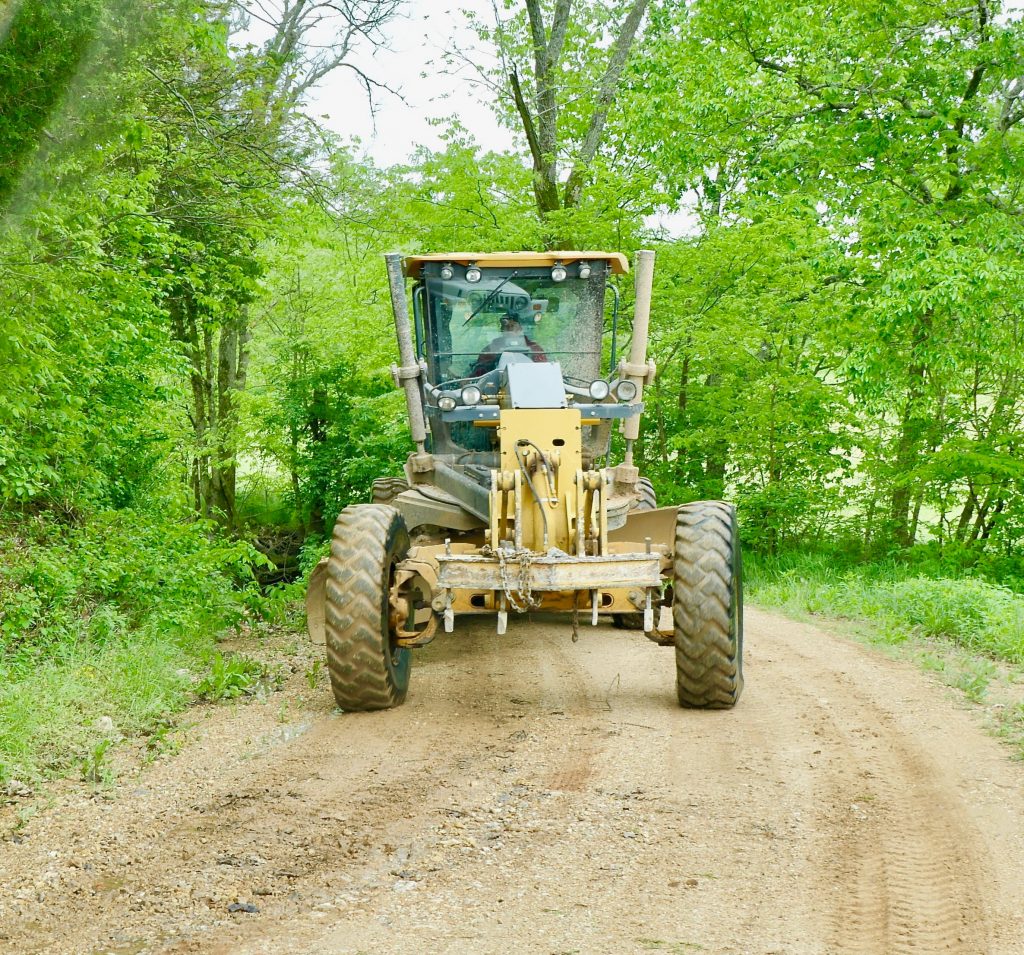 During their May 2nd meeting, the Douglas County Commissioners declared the road conditions an emergency.

For the short term, that declaration is more about setting internal priorities than opening up new channels of funding.

“The State of Missouri has to declare a state of emergency first,” said Douglas County Emergency Services Coordinator Danny Maggard. “They need to see at least $9 million in damages to do that. Once that declaration is in effect, Missouri can apply for federal assistance through the Federal Emergency Management Agency (FEMA).”

With the state-level connection with FEMA in place the county can apply for assistance.

“Douglas County would have to show at least $55,000 in damages,” Maggard said, “that’s the threshold amount to get FEMA involved.”

That involvement begins with a visit from FEMA.

“A survey team would come out first, and we’d show them the local damage,” said Maggard. “If they agree with our assessments a second FEMA team comes out to coordinate aid locally.”

The aid wouldn’t be available immediately, however.

“It is a bit of a waiting game,” said Maggard.

This past April 1st, the county started collecting an additional  half-cent sales tax. The funds generated by the tax are specifically for maintenance and improvement of county roads and bridges.

Unfortunately the rains came too soon.

“The new tax was first collected in April,” said County Clerk Karry Davis. “It won’t be available till end of the May, and it won’t be very much yet either.”

Meanwhile, county road crews are working overtime to do what they can to remedy the situation.

“Douglas County has 900 miles of roads to take care of,” said Davis. “And there are 16 full-time employees.”

“One of the equipment drivers (who declined to be identified) said he’d already put in 25 hours in the two days following the storm.

The county is focusing on access first, and improvements later.

“I think we pretty well got everybody where they can get in and out,” said Presiding County Commissioner Lance Stillings.  “They may not get to go the way they want to, but they do have a way out.”

“We’ll have to go back through the roads one by one to work on them more,” said 1st District Commissioner Craig Cunningham.

Nearly a week after the storms, the road crews were making repairs.

“The guys are working as long as they can stand it,” said Stillings. “They were working sunup to sundown. A lot of them worked Saturday.”

Stillings made it clear that this wasn’t a situation that the county was going to be able to recover from quickly.

“You can’t have 7” of rain in that amount of time and not have extensive damage,” Stillings said. “We’ve seen concentrated damage before and we can fix that quickly, but this is all the way across the county. Some of the repairs might require equipment we don’t have. Some spots may not be open for weeks.”

Douglas County received more rain after the April 30 storm, and there’s more rain in the forecast. Residents are advised to be patient, and give the road crews time to do their work. 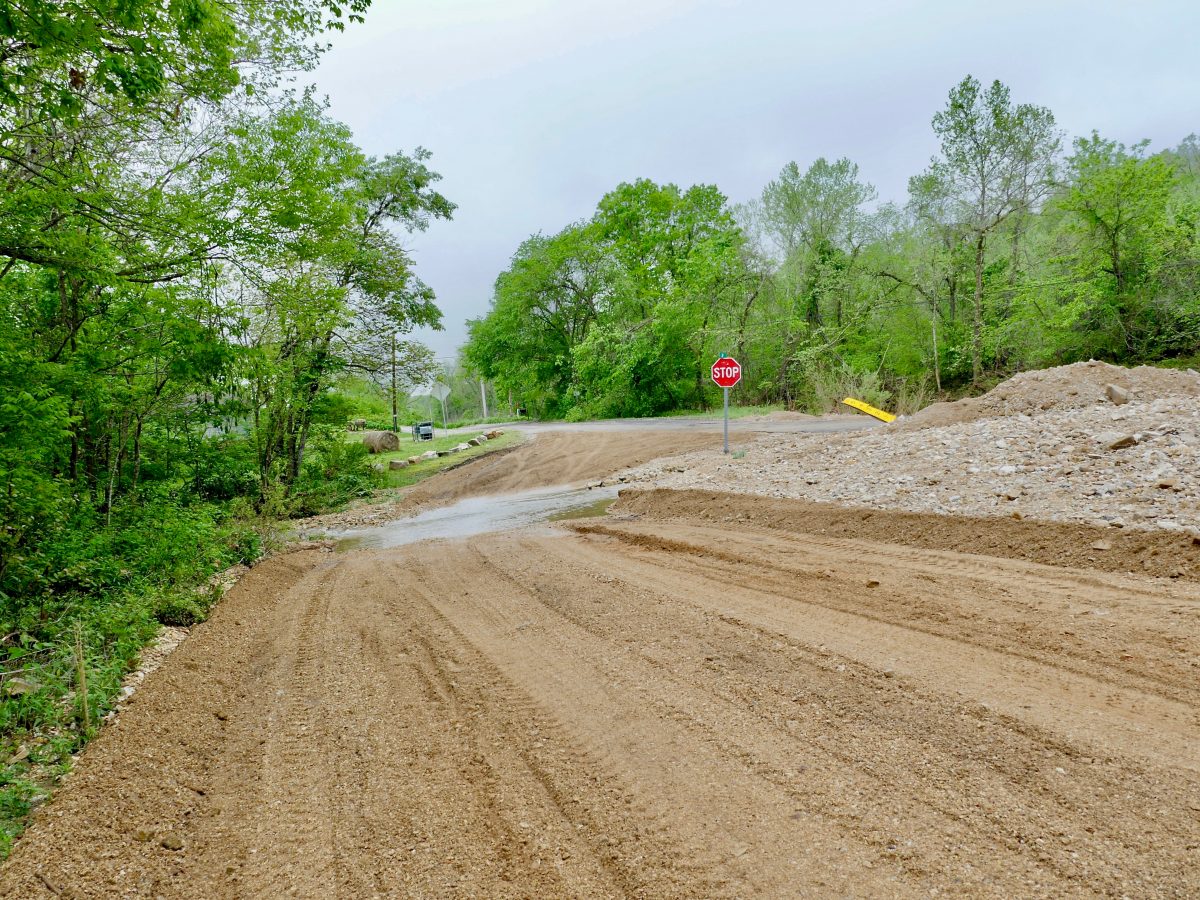 Michael Boyink/Herald County crews also worked on the intersection of FF and CR209 near Turkey Creek.

“We hate it as bad as everyone else,” said Stillings. “But there’s just a lot to cover.”