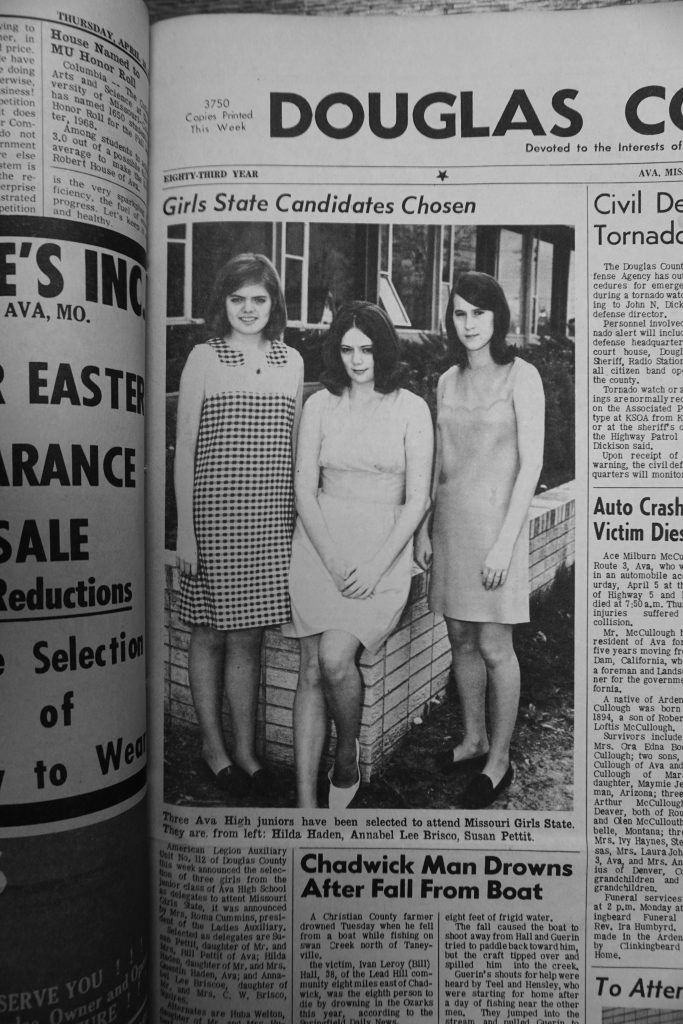 An eerie feeling came over the Ozarks just before noon Tuesday as the sun was swallowed up by the moon, in a rarely-seen annular eclipse.  As the moon moved in front of the sun at about 11:45 a.m., everything took on a darkened look, and the temperature mysteriously dropped several degrees as the full impact of the sun’s rays was blocked from the earth.

Bible Drillers from First Southern Baptist Church are Julia Ryan, Ashley Duran, Toni O’Dell and Brendan Price. Brendan was an associational winner and Julia, Ashley and Toni competed with over 500 children from throughout Missouri at Windemere on Saturday, May 7. Toni and Ashley were state winners and Julia was a state perfect winner. Bible Drill leaders are Mary Goss and Leah Lawson.

The Ava High School Bears defeated Marshfield 10-0 in five innings here Tuesday in the final home game of the season.

Bruce and BJ (Stomp) Sterling, Osceola, announce the birth of a daughter at 5:36 p.m. Monday, May 2, at St. John’s Regional Health Center, Springfield. The baby weighed 8 lbs., 6 oz., at birth and has been named Emily Nicole.

ONGO –– The sun is shining bright today after the big rain. We got four inches and three tenths in one night. It washed the roads out and at Punching Creek, it took two corners of the bridge. It’s dangerous to cross and the slab at Swan Creek is a problems.

A veteran member of the Missouri Highway Patrol was killed Tuesday when a truck smashed into the side of his car near Norwood.  Sgt. Lemuel R. Carter, 50, of Willow Springs, and a former resident of Ava, apparently died instantly in the tragedy.

Miss Deborah Rogers, daughter of Mr. and Mrs. Bill Rogers of Kansas City, and granddaughter of Mr. and Mrs. Elbert Luna of Ava has been chosen to take part in the 20th Annual Odd Fellows’ United Nations Pilgrimage for Youth this summer. Miss Rogers will visit New York from June 10-25 as one of more than 1,000 student observers of the UN from throughout the United States and Canada.

Mr. and Mrs. Lloyd Sanders who live about one-and-a-half mile west of Rom on the old Vernie Jones farm uncovered what they believe to be an Indian plow rock while having some bulldozing done on their farm. Mr. Sanders said a neighbor said the farm had not been plowed in about 75 years.

Clyde Bell, elementary principal, presented Mrs. Catherine Ray with a cop of the first Junior Docomo.  The elementary school’s first publication was dedicated to Mrs. Ray who has been teaching here for the past 29 years.

Hodges Station and Grocery, south of the square on Jefferson is sporting a new look with the construction of an all-steel and aluminum canopy. Thetis Hodges, owner and operator, has been in the location for the past five years.

Miss Sally Jo Privett, who has been employed in St. Louis, arrived in Ava Saturday evening and remained here until Wednesday as a guest of her parents, Mr. and Mrs. John Privett.  Miss Privett returned to St. Louis Wednesday and was to leave there today to go to the Marine Corps base in New River, North Carolina where she will begin her basic training in the Women’s Marine Corps. Miss Privett’s brother, Corporal Henderson C. Privett, is an enlisted man in the Marine Corps and is now serving in the south Pacific.

Three Ava Vocational agriculture students, one senior and two juniors have been elected state farmers –– the third degree in the Future Farmers of America organization.  They are Leonard Kropp and Herman McGill, juniors, and Dale Uhlmann, senior.

Mrs. Cloin Pettit, who has been making her home in Ava with her father, Louis Brown and family, left Ava Monday for Neosho where she will live while Private Pettit is stationed at Camp Crowder.

One of the most wholesome things that could happen in the United States would be for every senator, every representative, after serving six years, to go back home and try to make a living under the laws which they have passed.  Senator W. Lee O’Daniel, of Texas.

BLACK OAK –– Henry Huffman and daughters have moved on the farm of Mrs. Effie Workman.

Miss Alice Leathers, high school senior here, and Private John Dye of Sweden were married Monday at Mountain Home, Arkansas.  Miss Leathers is the daughter of Mrs. L.Y. Trowbridge of the Evans Community.  Young Dye, home for a few days furlough, is in the armed forces, stationed at Camp Beale, California. He is the son of Mr. and Mrs. John Dye of Sweden.

When the average person says, “As far as I know” he refers to an exceedingly short distance.

Lieutenant Roy E. Tharp, USNR, who will leave Ava May 22 for Pinceton, New Jersey to begin active service received $75 in war bonds and a number of war stamps as a parting gift from students of his music department.  Lieutenant Tharp has taught music in the Ava schools the past eight years.

The City Council at its regular session Tuesday night made arrangements to rent a room in the Herald building for council headquarters.  All of the city’s records and supplies will be kept in the office.

JEFFERSON CITY –– The 50th General Assembly, which adjourns May 9, will go out of existence bearing the unenviable record of having fought harder to kill tax reform and tax justice in Missouri, and with having passed the largest aggregate of salary raising and job increasing bills of any legislature in the entire history of the state.

Two-thirds of the livestock in the United States has to be raised in the West. One-half of the consumers of meat live in the East.  Because of its present size and efficiency Swift & Company is able to perform its part in this service at a fraction of a cent per pound profit.  Swift & Company, USA.

Luther Hunt and Boone Norman returned Saturday from Hammond where they had been for the past several days painting Geo. Grudier’s residence.  They will return to Hammond shortly to paint Mr. Grudier’s mill.

Burl Able of Squires has enrolled in Rabe’s Auto and Tractor School in Kansas City for a full course in automobile mechanics and tractor engineering.

ROCKBRIDGE –– A son was born to Mr. and Mrs. Ray Livingston last Wednesday.

A new trial has been granted in the $20,000 suit of Fred Stephens against Dr. C.I. Trimble, both of West Plains. At the trial several weeks ago, the plaintiff was awarded judgment for $12,000 for the alleged alienation of Mrs. Stephens’ affections. The plaintiff was granted a change of venue from Judge Patterson of the Greene County Circuit Court to Judge Guy D. Kirby of the same county.

At a recent meeting of the School Board, Frank Heimeyer was employed as janitor of the Ava Public School for the ensuing year.

BUCKHART –– The heavy rain that fell here last Sunday night did considerable washing of the ground.

VANZANT –– We are having plenty of rain.

OAK FORREST –– Mrs. Akers received a letter from her son who has been a prisoner in Germany and he expects to be home by the first of June.  States he is ok and that the US looks good to him.  We are all waiting to hear of those German prison camps.  So far as the writer knows Walt is the only Douglas boy who has been a prisoner.

A good three cent egg is better than cash for if handled right it will produce a ten cent chicken in 21 days.

The residents of Bryant, Mo., are much disturbed over the sudden disappearance of T.J. Jordan who lived near Bryant.  Mr. Jordan has not been seen or heard of since April 2, and his wife, Mrs. Jordan reports that he left the house on the 2nd day of April, that so far as she knows, he had no occasion for leaving and fears that he has met foul play. Mr. Jordan was 40 years old, six feet high, and weighs 160 pounds, sandy complexion. Any information as to his where-abouts will be gladly received by Mrs. Bell Jordan, Bryant, Missouri.

Conway has a lady whistler.

A steam plow is at work in St. Clair.

Mississippi County has 3,500 acres in watermelons.

A baby in Hannibal has a grandmother who is but 27 years old.

Fifty diamond rattlesnakes have been killed on the Widow Coffee place in Howell County.

Strange to say some people are so narrow minded in their construction that they expect a newspaper man to thoroughly conform to their many peculiar whims, publish their little free articles, some oft-times very long winded, and when an item involving a few cents for the printer occurs, they find some other way of getting it before the people.  Surely no man is more of a public slave than a printer.

Lige Hawkins, a desperate character who has been eluding the officers for the last two years, was captured Thursday near Swan, Douglas County and brought in and arraigned before Commissioner Silsley yesterday by deputy U.S. Marshal Brown. He waived examination.

At a meeting of the Republican Committee of the 11th Congressional District held at West Plains on May 13, a call was issued for a congressional convention to be held July 18 at Cape Girardeau. One delegate will be allowed for every 100 votes for Harrison in 1892 and one for fractions of 50 and over. Nearly every county in the district was represented.

The following marriage licenses were issued by the Circuit Clerk since our last issue: James Andrews and Samantha J. Hail of Brynant; and Harmon Clinton and Lizzie Dodson of Topaz.

All kinds of stock and produce taken in exchange for lumber or sawing at the Cox Lumber Mill, four miles south of Arno.

Mrs. Wm. Rattiff of this township was adjudged insane by the Probate Court on Tuesday and an application was filed with the county court to have her sent to the insane asylum which was granted by the court and an application forwarded to the asylum for her admission.