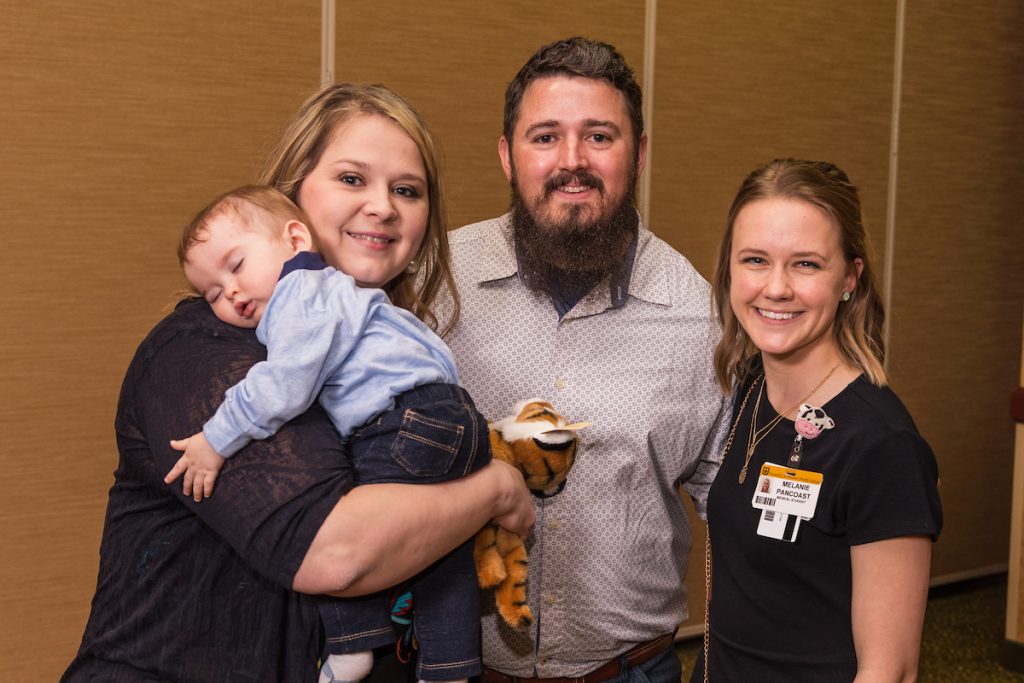 The University of Missouri School of Medicine Springfield Clinical Campus celebrated the important role that patients and their families play in the education of medical students at their Legacy Teachers luncheon on April 18 in Springfield, Missouri. Third-year medical students submitted essays, artwork or poetry describing a patient they recognized as one of their greatest teachers

Jessica Hall was driving with the windows down when she received the call. The person on the other end said something about her baby son, Memphis, winning a teaching award. That must be a mistake, she replied. When the caller persisted, she pulled off the side of the road and rolled up the windows so she could hear clearly.

She was told again that Melanie Pancoast, a third-year medical student at the University of Missouri’s Springfield Clinical Campus, had selected Memphis as the patient who was one of her greatest teachers. MU’s Legacy TeachersTM program honors these patients every year, and the Halls were invited to the inaugural Springfield edition of the event.

Jessica broke down in tears.

“Yes, whatever Melanie needs or wants, we will do,” she said. “We owe her our son’s life.”

The effect Pancoast and Memphis had on each other is a perfect example of the relationship the Legacy Teachers program celebrates. The program began at MU in 2005 under the direction of Elizabeth Garrett, MD, and has spread to other medical schools across the country. This year marked the first time MU held a separate ceremony for its Springfield class, and six of the 11 third-year students participated.

“With the growth of the Springfield campus, it seemed very natural to have a separate celebration down here so Springfield and the greater southwest Missouri area was aware of this program and to make it more accessible for patients in this area,” Garrett said.

The location made the banquet convenient for the Halls, but they would have traveled almost anywhere to celebrate this occasion with Pancoast.

The relationship began when Jessica and Levi Hall brought their feverish 3-month-old son to their pediatrician in Nixa, where Pancoast was completing her outpatient pediatric rotation. The pediatrician later noticed abnormalities in Memphis’ blood and sent the Halls to Mercy Springfield Hospital. That’s where Pancoast and the Halls reunited on the first day of her inpatient pediatric rotation.

“It’s difficult as a medical student to know what your role is in terms of patient care,” Pancoast said. “That’s something we all struggle with. But it was pretty great when I met Memphis and his parents and realized I do have an important role in the medical care of each patient. I can serve them with compassion and have a lot more time to spend with them than the attending physicians do, just because they’re so busy. So I can answer questions as I’m able and give them comfort.”

She did more than that.

“I think the second day we were there, she came in and said, ‘Hey, I went home and did some research, and I think I’ve come up with something that might be what is going on with him. I talked to the doctor about it, and we’re going to add it to the testing,’ ” Jessica said. “As the week went on and we were still trying to figure out what was wrong with him, I was kind of rooting for her. I said, ‘This is going to be so cool if you’re the one who figured it out.’ ”

As it turned out, Pancoast was right. A fungal infection had led to hemophagocytic lymphohistiocytosis (HLH), a rare life-threatening disease of the immune system that damaged Memphis’ spleen, liver, kidneys and bone marrow and required five blood transfusions. After diagnosis, Memphis responded to treatment and was all smiles at the Legacy Teachers banquet five months later.

Pancoast said the Halls showed her the importance of taking the time to give full attention to patients and their families.

“They trusted me and presented me with so much kindness every day,” she said. “I learned that just as important as treating a patient’s disease and being able to talk to them about medicine is listening to them and providing them with compassion.”

Editor’s Note: Levi and Jessica Hall are natives of Douglas County, and graduates of Ava High School, in 2005.

Jessica is the daughter of Ric and Lisa Engelhardt, and Levi is the son of Terry Hall and Karen Clevenger.

The Halls serve on the worship team of Life Church in Ava.

Their son, Memphis, is currently receiving treatment through the St. Jude affiliate clinic in Springfield, Mo., but Jessica and Levi are both hopeful upcoming tests will show the infection has cleared.

On August 2, the CBCO is hosting a blood drive in Ava in honor of Memphis’ first birthday, he will be one-year-old.  The family is grateful for those who have donated blood, prayed and offered support during his illness.

For those interested in following Memphis’ journey to better health, he has a Facebook page entitled, “Sweet Memphis Brooks” where additional information and updates may be found.