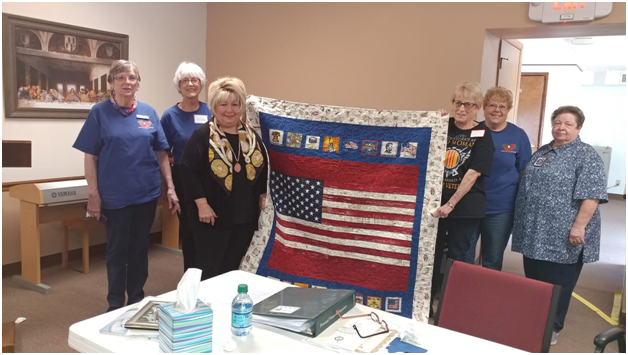 Taneycomo Chapter Daughters of the American Revolution met on Monday, April 15 at Community Presbyterian Church in Forsyth. The chapter presented the Junior Auxiliary of Taney County “Tender Critters,” small stuffed animals which are given to children in the ER room at Cox Branson as well as Branson and Hollister Police Departments, bringing comfort to those experiencing trauma.

Featured speaker at the meeting was Mitzi Huffman who served as a nurse during the Vietnam War. Mitzi grew up in a military family and joined the Air Force, serving from 1969 to 1974.

Mitzi spoke of her experiences in Vietnam and about her return to California upon completion of military service, where she experienced objects being thrown at the bus she was being transported in.  She said her mother advised her to change out of her uniform as soon as possible in order to conceal the fact that she had served in the war. Confused about the divisive, emotional storm of the Vietnam War with all its controversies and complexities, she made the decision to return to school to become a Nurse Practitioner.

DAR member Linda Randolph presented Mizi with the Vietnam War Veteran pin in commemoration of the 50 year anniversary of the Vietnam War.  Also present was the organization “Tablerock Quilts of Honor,” who presented Mitzi with a quilt made for her.

Betty Thomas of the organization said “It is always a privilege to present a veteran with one of our quilts. I really enjoyed listening to Mitzi. She was a joy to meet.”

For information on Taneycomo Chapter of DAR, email tcomodar@gmail.com.