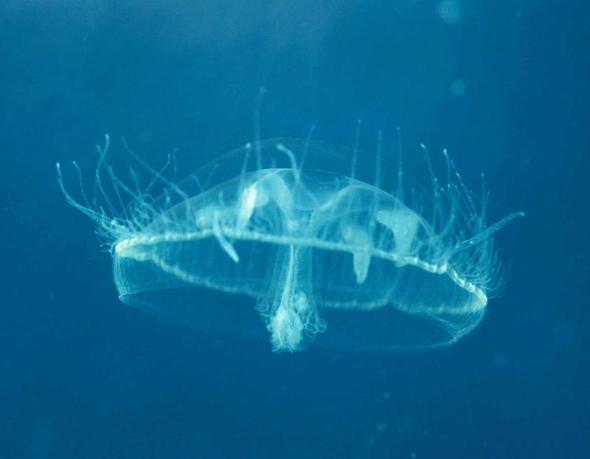 Join the MDC Wild Webcast on Weird Wildlife May 22 at noon to learn about Missouri’s freshwater jellyfish and other animal oddities in the Show-Me State. Register in advance at short.mdc.mo.gov/ZNs. Join the webcast live from a computer or mobile device.

Register in advance at short.mdc.mo.gov/ZNs. Join live from a computer or mobile device.

JEFFERSON CITY, Mo. – Did you know that Missouri has several species of fish that swam with dinosaurs? That stinging jellyfish swim in Show-Me State lakes? That turkey vultures poop on their own legs to cool off and vulture chicks vomit and spray stomach acid when threatened? That the tiny short-tailed shrew uses venomous spit to paralyze prey? That Missouri has microscopic animals as big as basketballs? That the Show-Me State has a see-through fish where you can see its heart beating?

Join the Missouri Department of Conservation (MDC) for its free Wild Webcast on Weird Wildlife Wednesday, May 22, from noon to 1 p.m. to learn more about these and other animal oddities. MDC experts will share some interesting information and plenty of pictures of odd animals found in the Show-Me State. Webcast participants can also post questions through the webcast.

Register in advance for the MDC Wild Webcast on Weird Wildlife at short.mdc.mo.gov/ZNs and then view the live webcast from a computer or mobile device.

“We will be talking about some fascinating weird wildlife found in Missouri,” said MDC Urban Biologist Erin Shank, who will be one of the guest experts. “One of my favorites is the armadillo. They are all-around weird. Everything about them is weird. The fact that they are in Missouri is weird.”

MDC Fisheries Biologist Darby Niswonger, also a guest expert, added that Missouri has some cool aquatic critters too. “One of my favorites is bryozoan colonies,” she said. “These microscopic animals form round, jellylike masses that float in the water and can get as big as basketballs!”