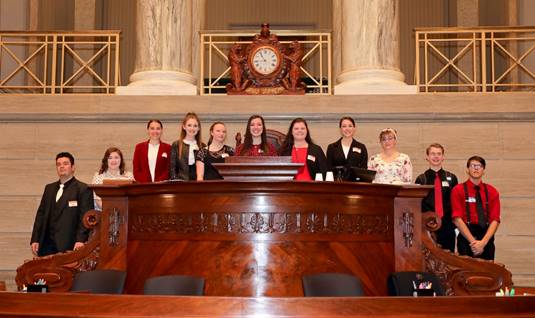 Music students from Ava R-1 represented the Tri-M Music Honor Society during a music education advocacy day at the Capitol.

It’s springtime in Missouri. The weather is nice, the roads are clear and teachers are looking for new educational experiences for students after a long winter cooped up in the classroom. That can mean only one thing at the State Capitol. Field trip season has begun.

Every April and May, the halls of the State Capitol are filled with students who travel to Jefferson City to witness government in action. It’s a great time to be a legislator, because we get to greet children of all ages and share in their sense of wonder as they visit our beautiful Capitol building. This week, I had the pleasure of welcoming a number of outstanding young citizens from the 33rd Senatorial District.

Congratulations to the Class 2 State Champion Lady Bobcats basketball team of Thayer. The girls visited the State Capitol and received recognition for their victory.

Among the groups visiting the Capitol recently was the Ozark Christian Academy, a faith-based private school that offers a rigorous curriculum of elementary and secondary education in West Plains. OCA sends a delegation to the State Capitol every year, and it’s always a pleasure to meet with them.

A group of music students and their teachers from the Ava R-1 School District also visited the Capitol this week. These talented students, representing the Tri-M Music Honor Society, joined other musicians from around Missouri to participate in an advocacy day organized by the Missouri Music Educators Association.

This week, I took pride in introducing members of the Thayer Lady Bobcats basketball team to my colleagues at the Capitol. These dedicated athletes brought home Class 2 state champion honors, beating Mid-Buchanan High School in the 2019 Missouri State High School Athletic Association finals on March 9. This was the first girls’ basketball state title in Thayer’s 45-year program history. The championship victory topped a 30-3 season and a 14-game winning streak for the Lady Bobcats. Congratulations to coaches Cecil Meyer and Lindsley Meyer and all the players who worked so hard this past season.

Also, this week, I had the honor of meeting with members of the Missouri 4-H Shooting Sports team, which took top honors at the 4-H national championship in Grand Island, Nebraska. Two top guns from the 33rd Senatorial District were among the group of young marksmen who brought home the Tom Davison Championship Trophy. Kaitlyn Davis of Summersville and Pierce Ford of Licking are both members of the Texas County 4-H program. Davis competed in small bore rifle events, while Ford is a member of the 4-H shotgun team. Congratulations to these two outstanding young Missourians.

Kaitlyn Davis of Summersville and Pierce Ford of Licking are both members of the Missouri 4-H Shooting Sports Team, which took first place in the national 4-H championship in Nebraska recently.

The shooters from 4-H may not be out-gunned, but they were certainly outnumbered this week. Thursday was FFA Leadership Day and the halls were packed with young people in blue corduroy jackets. The annual event, sponsored by the Farm Bureau, brought about 400 FFA delegates to Jefferson City to learn about agriculture advocacy and see their state government in action.

Among the many FFA members in the Capitol this week, I was pleased to recognize two dozen students from West Plains, Willow Springs, Mountain Grove, Alton, Hartville, Gainesville and Ava in the Senate chamber. It’s a treat to greet members of FFA groups. They are always polite, respectful and well-mannered during their visits.

The Missouri Senate continued its work of considering bills and resolutions this week. The Senate Appropriations Committee finished reviewing budget bills and will report them to the full Senate next week. I know that many of my constituents will be happy to learn that no money was appropriated to support Common Core in Missouri classrooms.

Finally, I hope everyone in the 33rd Senatorial District had a joyous Easter holiday.

As always, I appreciate it when groups from around Missouri and from our community back home come to visit me at the Capitol. If you would like to arrange a time to come and visit me in Jefferson City, or if you ever have any questions, please don’t hesitate to contact my Capitol office at (573) 751-1882.