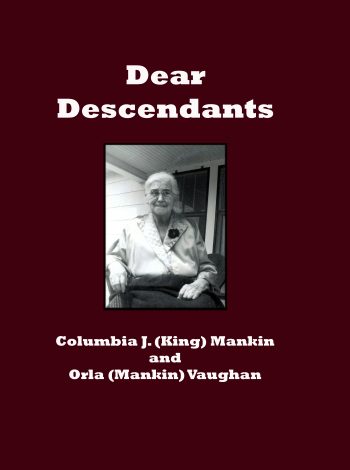 She certainly didn’t want to write a history book.

She refused. “I just bucked like a bay steer,” Lum later wrote. “You see, I’m not able to write any more.” She was in her 80’s. Her one good eye was failing. She couldn’t hear well. She had arthritis, neuritis, and angina.

Her daughter Orla offered to help. Lum reconsidered. “Thanks be to God, my mind is still alert,” she wrote. “My spirit is willing, and there’s not a thing wrong with my tongue.”

She could talk. She could tell the stories one last time. And Orla could write them down. 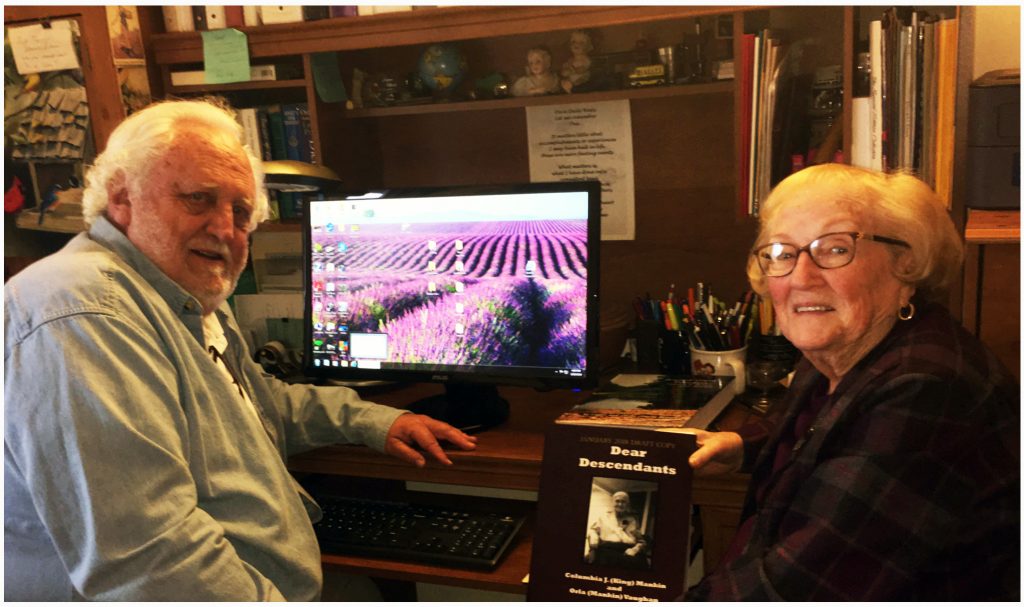 And don’t even think about changing it or revising it.

Because if she were to “use a wrong tense or end a sentence with a preposition, that’s just all right.”

Orla made sure she kept paper and pen handy. And Lum started talking.

She talked about herself. Born in Ava in 1873. Given the name Columbia Jefferson by a hired girl and an uncle. And not happy about their choices. “If it were all to do over again,” she wrote, “I’d give the names right back to them and pick me out one to my liking.”

She talked about her ancestors. She explained to her descendants that “their blood still runs in your veins, and many of the family characteristics still show up in you.”

She talked about her childhood. “Everybody worked in those days, and a girl that didn’t know how to cook, sew, and keep house wasn’t worth her salt. I learned early, and I’d often get meals for the family when I was pretty short.”

She talked about the Civil War. She lost her grandfather and great uncles in Ava’s only Civil War skirmish.

The men and most of their wives were gathered at her grandfathers house, which sat where Ava’s Post Office does today.

A surprise attack by rebel “bushwackers” sent the men out to their horses then up the hill to the west.

The hill had trees, and a low-hanging branch caught her father on his head. It knocked him out and he fell from his horse. The rebels – still in pursuit – presumed him dead and passed him by.

Her grandfather, his two brothers, and other men noticed him missing. They came back to “fight or die with him”. Unfortunately they returned directly in the path of the oncoming rebels and did lose their lives that day.

“Wives and mothers buried their own dead in graves they’d dug themselves,” Lum writes.  “The women hammered together rude coffins for their loved ones. After they’d helped each other bury their dead in the graveyards they wanted to put them in, they came back and dug a big grave and buried the rebel soldiers.”

She talked about her professional career. She spent one year as a teacher in Flint Point (midway between Ava and Mansfield). “I was tickled to death to get to the school,” she wrote. “It wasn’t so far from Ava but what I could ride home for weekends.” Marriage brought her career to an end.

She talked about new adventures in her later years. “My teeth were chattering almost as much as the wolf’s were, but I got a grip on myself, took a careful aim, and cracked down on him. I plugged him almost between the eyes – and at the age of sixty-five had killed my first wolf.”

She talked until she was done talking. “Then one day she said she was tired and wanted to quit,” writes her daughter Orla. “We never worked on it any more for in a short time she took sick.”

Columbia J. (King) Mankin passed away a short time later, at 85 years old. The last rites spoken over her body were delivered at the Clinkingbeard Funeral Home, which was built where the house she was born in used to be.

Orla typed up her written notes and assembled a book. A few copies were made and passed around, mostly to other family members.

In 1976, recognizing the value of the local history captured in Lum’s stories, Orla and her sister donated two copies of Dear Descendants to the Douglas County Library.

In 2008, local historian Ken W. Brown, found the books in the library and begin the task of scanning them into digital form. That work produced a few more copies of the book.

That work is finished. You can now order your own copy of Dear Descendants by visiting https://tinyurl.com/lums-book

Lum may have stopped talking, but through the efforts of her family, the Douglas County Public Library, and local historians Ken Brown and Cinita Brown, her words continue on.

Join Ken, Cinita, members of the Mankin family, and others for a Dear Descendants book launch celebration on Saturday, April 27th from 2-4 p.m. at Jane’s Beauty Shop at 205 W. Washington in Ava, MO.

They will have printed copies of Dear Descendants available for $25. They will donate $5 to the Douglas County Museum with each purchase.