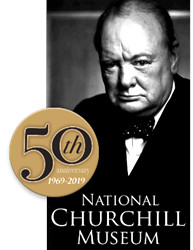 Colorful Parade, Free Tours, New Exhibits, Authors, Artists in Fulton, Mo. –– the public is invited May 3-5 to enjoy the festive celebration, including free Museum weekend, a first-ever Presidential art exhibit, the re-dedication of St. Mary the Virgin, Aldermanbury, and much more.

FULTON, Mo. –– Former British Prime Minister Winston S. Churchill would have loved the fun and excitement of a colorful parade, hearing great speakers, studying the paintings of American Presidents and 4,000 Mid-Missouri students, and gazing in amazement at “Breakthrough,” a tell-tale sign of Communist aggression and its subsequent failure.

He also would have enjoyed a solemn moment inside the historic Church of St. Mary the Virgin, Aldermanbury, which was once stood about three miles from where he served as British Prime Minister – twice – in London.

These are just a few of the free activities and events that will be open to the public the weekend of May 3-5, 2019, when Westminster College, the City of Fulton, the State of Missouri, and Churchillians throughout the United States and abroad will celebrate the 50th anniversary of America’s National Churchill Museum on the campus of Westminster College in Fulton.

Family members of Churchill and President Harry Truman, who helped invite Churchill to visit Fulton in March 1946, will be among the crowds traveling here to enjoy the anniversary events. Churchill family members include Clementine and Winston Churchill’s granddaughters, The Hon. Edwina Sandys, M.B.E. and The Hon. Emma Soames; great-grandsons Jack Churchill and Duncan Sandys; and, Truman’s grandson Clifton Truman Daniel.

America’s National Churchill Museum is the only Class A museum in North America dedicated to commemorating the life and times of the 20th Century’s greatest leader. It opened in May 1969 to memorialize Churchill’s “Sinews of Peace” speech (often called the “Iron Curtain” speech), which he delivered here 73 years ago. The speech echoed around the globe, and started the West’s “Cold War” against the Soviet Union.

The day the museum opened, the historic Church of St. Mary the Virgin, Aldermanbury was re-hallowed as a place of worship by officials of the Catholic, Anglican, and other faiths. It was built in Central London in 1181, rebuilt in 1672 by Royal Architect Christopher Wren after the Great Fire of London, and burned again during the Germans’ bombing of London in late 1940. In the early 1960s, it was carefully disassembled, and reconstructed on the Westminster campus –– based on Wren’s plans –– to memorialize Churchill’s 1946 speech.

The weekend will include free museum tours at 11 a.m., 1 p.m. and 2 p.m. on Friday, 9 a.m., 1 p.m. and 3 p.m. on Saturday, and all day Sunday. At 1 p.m. Friday, a special walking tour will be led by author, artist and videographer Steve Stinson, who served as one of the original Museum tour guides.

His father, Dave Stinson, also was responsible for organizing the disassembly of the church of St. Mary the Virgin, Aldermanbury in London and its relocation and reconstruction on the campus of Westminster College.

Everyone loves a parade, and this one gets underway at 2:30 p.m. Saturday. It will include members of the Churchill and Truman families and other VIPs, as well as high school and military bands, historic military and civilian vehicles, and much more. The fun begins at Westminster Ave. and W. 7th Street, winds through city streets, and ends at the Museum. A reviewing stand will be across the street from the museum. There also will be a salute to the Eagle Squadrons of WWII and one of their own, Lt. John Lutz, of Fulton.

Another museum exhibit –– The Journey of Sir Christopher Wren’s St. Mary the Virgin, Aldermanbury to Fulton – is a collection of photos, documents, and archival materials that shows the arduous undertaking of relocating Royal Architect Christopher Wren’s 17th century church from Central London to this small Midwestern town in the 1960s.

A third exhibit, Special Relationship Project, features 4,000 paintings by K-12 students from Mid-Missouri whose work explores the idea of “special relationship,” a term coined by Churchill in his 1946 speech.

Audiences will thrill at a much-awaited free recital by internationally renowned organist and St. Louis native Frederick Hohman on the church’s Mander Organ. It was built and installed by legendary British organ builder Noel Mander. While his most famous organ is installed at St. Paul’s Cathedral in London, the “Aldermanbury organ” is considered by many experts to be the finest baroque organ in America.

While nearly all events are open to the public, some activities will require tickets.

For more information, go to www.nationalchurchillmuseum.org or call 573-592-5369.