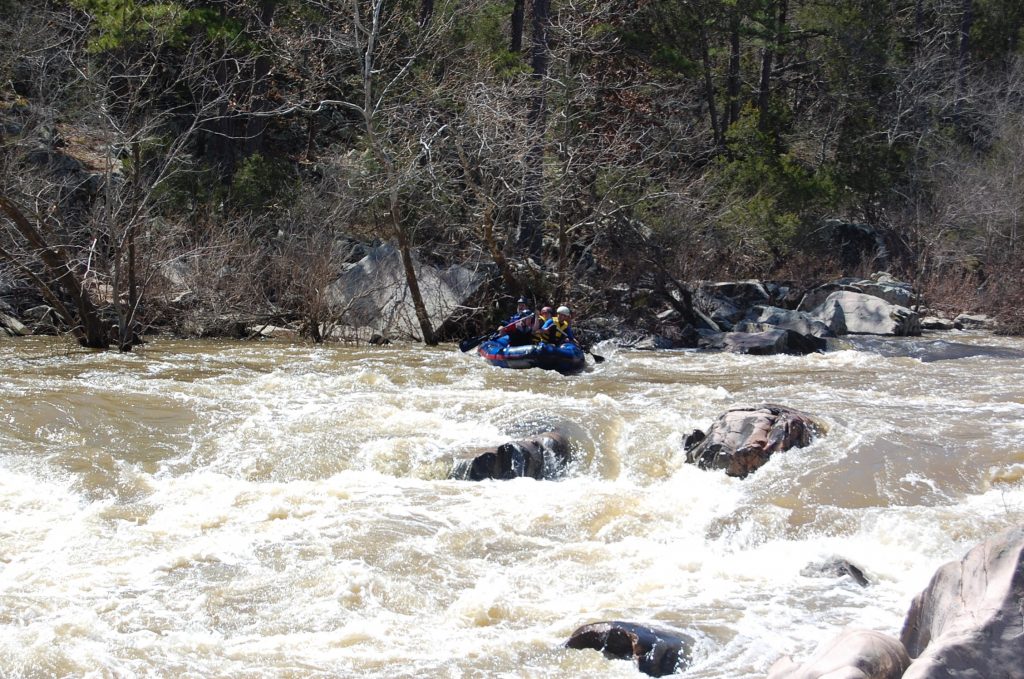 If it’s Easter weekend, you know where you can find me, on the scenic and thrilling whitewater of the St. Francois River. We have only missed it twice in 40 years.

The St. Francois begins as a small clear-water stream just west of Farmington, Mo. for a good portion of its length.  Then it strengthens into the best and most widely known whitewater stream in the mid-West flowing through the Mark Twain National Forest. After the Shut-ins, it slows down and meanders down through the edge of the Missouri border between Poplar Bluff and Kennett, Mo. 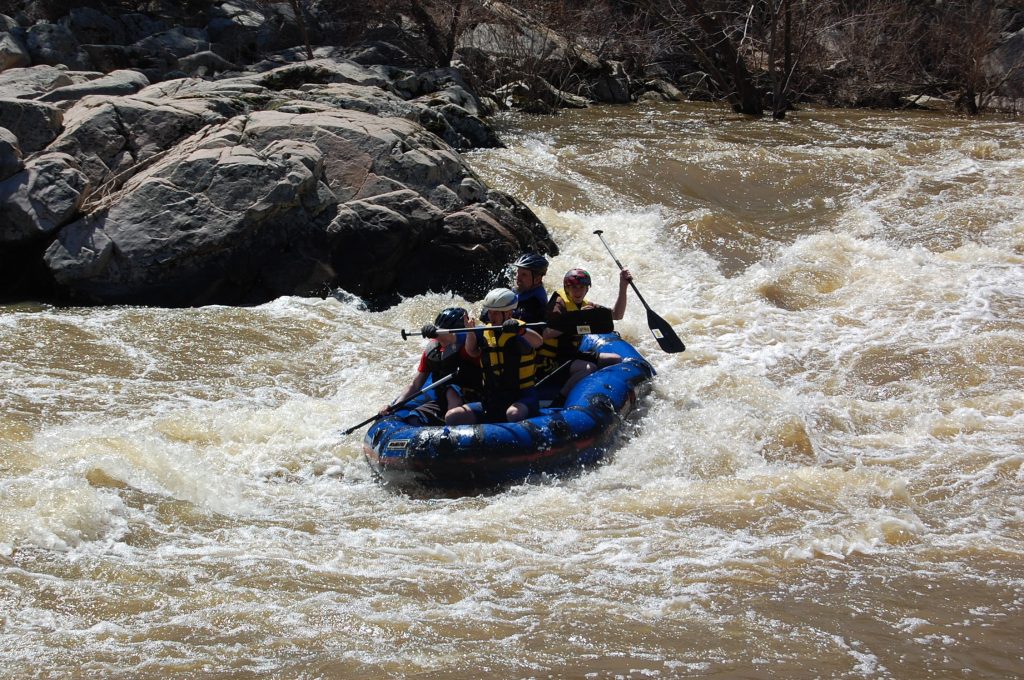 Finally, after the great river is dammed once at Lake Wappapello, it empties across the Missouri-Arkansas border into semi-bayou country and cypress swamps. Just before its muddy, brown waters dump into the mighty Mississippi there is one of the greatest duck hunting areas of the North America located in the many islands of hard land sandwiched besides oak and cypress knees between the Francois and White River. This is holy grail land to all true duck-hunters. It’s capital is the small east Arkansas town of Stuttgart.

However, today we are only mainly interested in the 4-1/4 mile stretch of the river located within the Conservation boundaries of Millstream Gardens otherwise known as the “Thiemann Shut-Ins.” 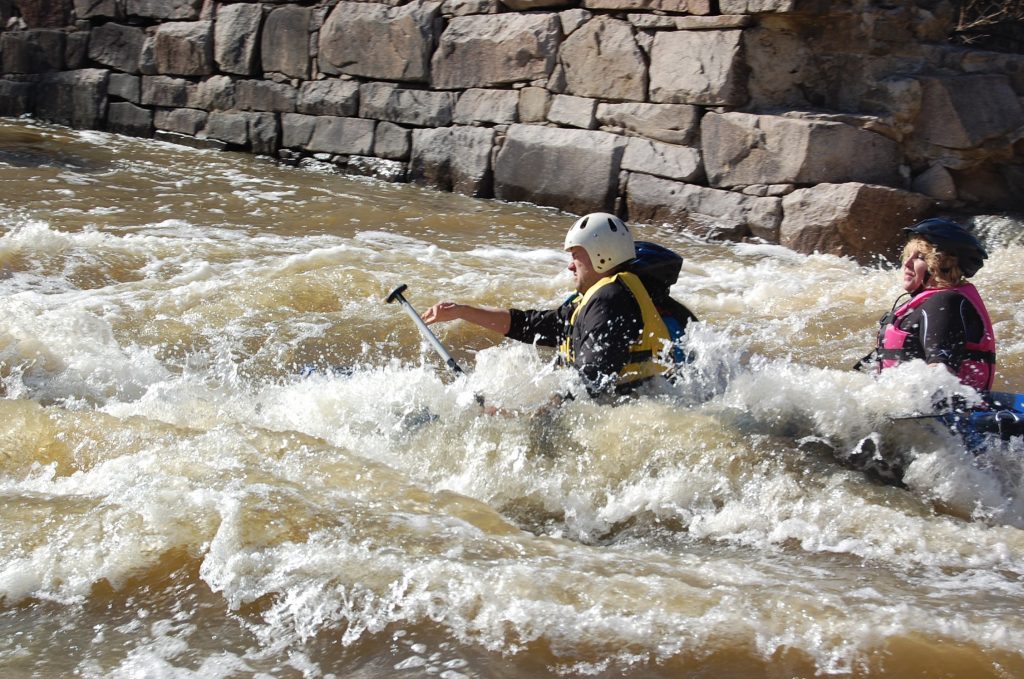 The shut-ins begin just below Mo. Hwy. 72, between Fredericktown and Arcadia, and  last for almost 4-1/2 heart-pounding miles.

First, you encounter First Drop, an easy 2-1/2-ft. ledge drop. Then, 100 yards below lies the first of  four major rapids… Big Drop, a gnarly 6-1/2 foot drop (the lower the water the steeper and more technical is this rapid).

One quarter-mile downstream is a large sharp-finned boulder rising in the middle of the river.  Just to the right of this so-named Shark’s Fin lies the entrance to the Francois’ most notorious flipper known as Cat’s Paw.  There are three routes here –– right, center and left –– depending on water levels and one’s whitewater skill.

After you’ve cleared the water out of your boat or ears, as I have done on five occasions, you must prepare for the Mouse Hole at Double Drop rapid. Here the river drops three-feet and then with a slight jog to the right, immediately another two-ft. drop is encountered.

Below this drop is a pool of water bordered by a broad gravel beach on the right and several flat boulders on river-left which overlook these two drops. Undoubtedly, these nearby rocks provide the closest and best crowded viewpoint for boaters and others who have taken a break to hoot and holler at new boaters encountering Double Drop. On a good week-end Saturday or Sunday, such as Easter weekend, any boater will be loudly booed…. if they select the “chicken – route” to the left after the first big drop of  Mouse Hole.

But, if you are brave, and you better be, you will decide to take the two-foot drop just to the right after Mouse Hole.  You will be richly rewarded and applauded by the throngs at the rapids, depending on how much face-water you experience.

Thus, the name of Double Drop Rapid is well-named.

But wait, after another quarter of mile downstream floating, you will encounter Rickety-Rak, which consists of a devilish S-turn, with a two-foot drop contained in each “S.”

So you are now at the end of the Missouri Whitewater Association’s course from Big Drop to Rickety-Rak, approximately 1-1/4 mile. It is in this section where they set up various downstream and upstream river gates each year during the mid-March qualification races.

However,  you are now only half-way through the shut-ins.

Next is a mile of flat-water facing due south. Yes, it can be windy and slow on a warm, windy spring day.

Anyone familiar with whitewater streams will know that long flat stretches usually precede short, violent drops ahead. And if you guessed this about the Francois, you’d have guessed right. As soon as Turkey Creek, floatable down to this point for about three-miles in high water, enters on river-left, you enter the Narrows and encounter a couple of willow jungles with 18-inch drops contained therein for about 400 yards.

Then another slow stretch is followed by a five-foot drop at a breech in the old rock Silvermine Dam. This dam, as most are, is a potential killer at high water levels. If water levels on the Francois are above the old bridge at the NFS Silvermine campsite just off of Hwy. D, be prepared to portage around the old dam or better yet take out 1/2-mile above on river-left at the Turkey Creek Picnic Area.

After the dam there are several more tight chutes and short drops in the next 1-1/2 miles down to the take-out at the old “D” Bridge site. There, on river left, you will find a river gauge on one of the east side bridge pillars.

Without a doubt, this stretch constitutes one of the most scenic, accessible and wild 4-1/2 miles downriver rides in the Ozarks.  And if you are not up to boating Class II-IV, depending on water levels, there is an outstanding hiking trail that follows “river left” from the put-in just above First Drop, all the way own to the old Hwy. D bridge at the take-out.

The rock outcroppings in the shut-ins (a series of mini-gorges) are made up of colorful ancient purple, pink, and red basalt and granite boulders. These are, as I have learned, the oldest rock formations in North America, I believe.

On Saturday March 30, I went to a well-attended fish fry and auction/pie supper benefit at old Vanzant Community Center. The food, music, and fellowship were all great.

And looking at all of the art posted in photos by the Herald in the weekly paper, I was very impressed by the talent displayed by these young future artists. This is spoken by a person who has no artistic or musical talent, but appreciates both.

Now, get up and go enjoy our beautiful Ozarks outdoors!

Posted in Notes from Hunter Creek