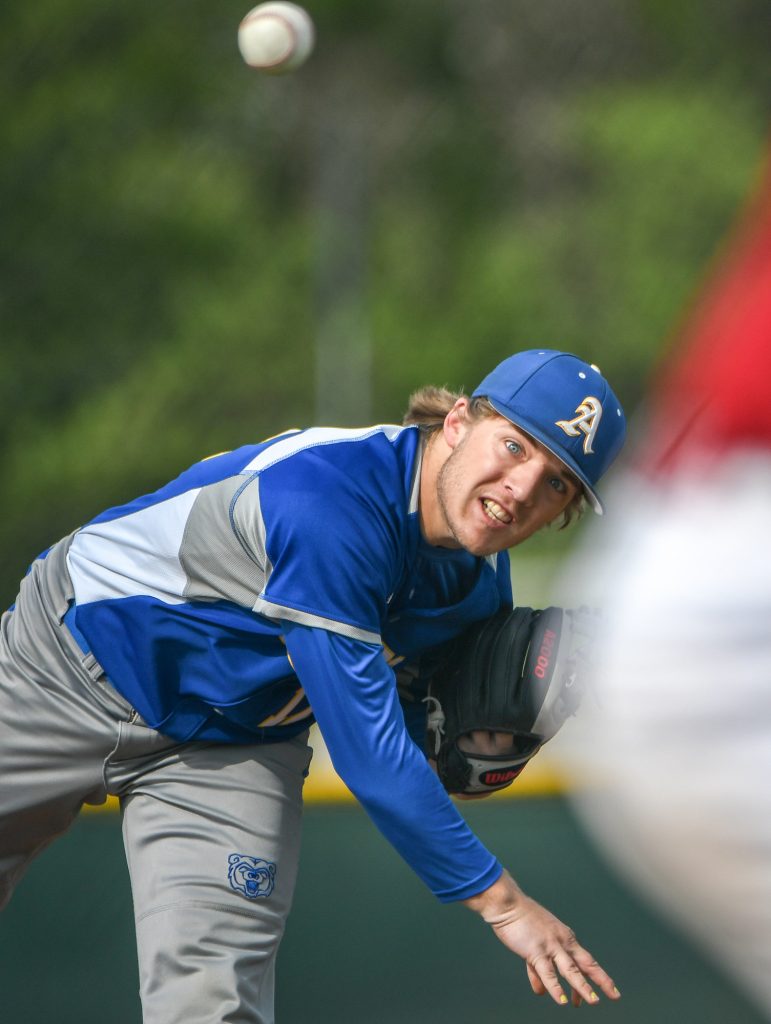 According to Newton, what goes up must eventually come down. After a high-spirited comeback against a 3-0 deficit against Salem on Monday, the Ava High School Bears almost gave up a no-hit, no-run game to Mansfield Pitcher Chase Wilson who threw four innings without a hit, nor a run, from the Ava offense.

What was expected to be a challenging, defense-driven game turned into a no-show from the Ava Bears who committed a total of six errors and allowed 17 runs on 13 hits from the Mansfield offense.

The Bears did not fare well on the offense, either. With cold bats and no more than four plate appearances in any given inning, the Bears were put into a deep hole after putting away 1, 2, 3 in the Mansfield order at the top of the first.

A 6-3 play took out lead-off batter Tom Emerich (.371 ERA, .486 OBP), who may have hit a bit of a slump since going four of four against Houston on April 11 for two runs. He was one of four against Salem on Monday, reaching on his fourth appearance and completing the diamond for a sixth-inning insurance run. Emerich is currently at 14 hits from 38 plate appearances this season.

It was top of the second with 3, 4, and 5 due up for the Lions. Johnson (1.837 ERA) was at the helm and uncharacteristically allowed four hits in a row. First a grounder to center field, another by shortstop Tom Emerich (.889 FPCT) to put two on for the Lions.

Payton Watterson and Hesston Gray were on bags when a grounder past Ava third baseman Zack Miller (.778 FPCT) brought-in two and a fumbled defensive effort granted an extra base to Hunter Gray on top of his RBI single.

A dropped ball by Skyles (.850 FPCT) deep in centerfield led to an RBI single for Lion batter Chase Wilson. With the Bears trailing 3-0, the defense needed to put away Lions at no outs and one on.

An error by left fielder Carter Campbell (.750 FPCT) earned Arly Miller second base, bringing Wilson in for run number four. It wasn’t the last the Bears saw of Wilson, who would be back at-bat again in the top of the second.

Ryan Henry reached first on a well-placed ball into a hole in the right field. A balk from Caleb Johnson gave him second then a passed ball put him on third while bringing Miller in for the Lions’ fifth run.

Mansfield’s Noah Mitchell would pick up a K on the full count, but Johnson would put two more on before Ava coach Rex Sawyer had seen enough and pulled Johnson off the mound after two and one-third innings.

In came Zack Miller (5.250 ERA), who was put in a precarious situation after Johnson’s undoing on the rubber. Johnson moved to his native position behind the plate, but not before setting things up to allow eight runs on six hits.

The Lions had successfully batted around to lead-off hitter Chase Wilson who slammed a home run on the first look to make the ninth run of the inning for the Mansfield Lions.

The Ava defense put away batters 11 and 12, but the damage was already done.

Miller put away seven through nine in the third, and the Ava defense kept the lid on Mansfield early in the top of the fourth putting out Watterson and Hesston Gray at first on ground balls.

Hunter Gray reached first on a bad throw from third for the Bears’ fifth error of the game. A steal of second and an error at home plate (the Bears’ sixth) put Gray in scoring position with two out. Wilson returned for his third at-bat, putting the pearl right into a hole in left-centerfield for an RBI single and the Lions’ tenth run in less than four complete innings.

Zack Miller got Mansfield’s Miller to chase one for out number three and his final pitch of the game. Earlier in the top of the fourth, senior Garrett Forrest (5.250 ERA) was warming in the Ava bullpen.

Mansfield pitcher Chase Wilson wasn’t done with dealing it to the Bears on both defense and offense, but it became apparent that his strength was waning at the bottom of the fourth. At this point, the pitcher had put the Bears in a No-No situation and had earned his keep atop the mound.

Six, seven, eight up in the top of the fifth made the finish line mirage in the distance for the Bears. Senior Forrest Garrett opened with a hit on his second pitch to Henry, but Mitchell flied-out to Andrew Dalton in right field for the first out.

The end was thought to be near however, the apparition turned into the Bears’ second nightmare of the game.

Dawson Barnett had already scored one run in the second and flied-out in the third. In his third appearance he hit a chopper to shortstop Tom Emerich, who hit the ground with his fist in frustration at missing the bouncer and letting a second baserunner on.

Casey Carnall was one of two at his third appearance which included a passed ball on Johnson, pushing Henry to third and Barnett to second before he sent the ball to Dalton for the second out.

Watterson was walked by Garrett, juicing the bases. Grounder to the shortstop, a fly into a centerfield gap and a walk for Chase Wilson on the full count racked up the runs at the top of a fifth.

Finally, a 6-3 play put out Barnett in his fourth appearance, ending the onslaught.

TALK ABOUT THE NO-NO

In baseball, it is taboo to talk about a No-No in progress. For the more superstitious fans, the talk can jinx a pitcher’s success.

Ava fans were talking about it in hopes of taking the game away from Wilson.

After Garrett was put out in a 4-3 play, Zach Mendel picked up a base hit on the 2-2 pitch ending Wilson’s bid at a perfect (five-inning) game.

Dalton followed and reached first on the fielder’s choice, which snagged Mendel on the forced out at second. Richards flied out to left field to end the game after five innings.

Credit is given when credit is due. Wilson pitched a total of five innings with 14 at-bats, two strikeouts and only allowed one hit off the bat of Ava’s Zach Mendel to nearly clinch a perfect game.

The Bears are now 8-3 in their regular season but remain undefeated in the SCA Conference after three conference games. Ava is expected to face Cabool at home (weather and field conditions permitting) this evening at Kerr Field in Ava. 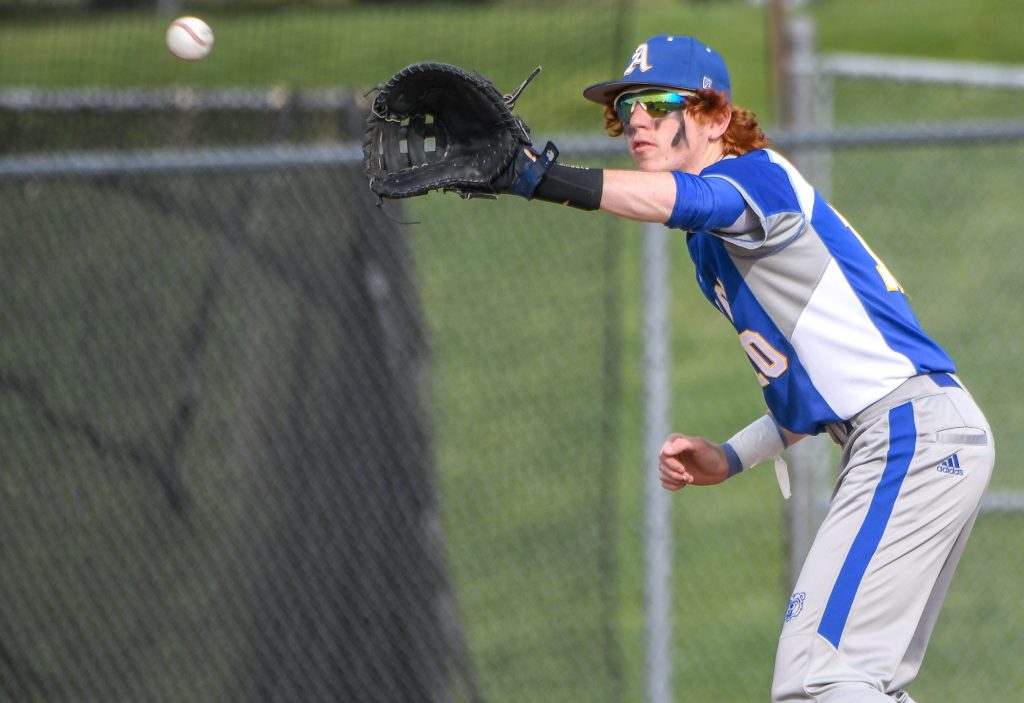