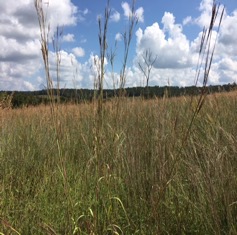 They also offer alternative to toxic fescue at key times.

Most tall fescue, Missouri’s primary forage, is infected with an endophyte that can be toxic to cattle, especially during summer. It can cause poor animal performance, lower reproductive success and even death. “Summer slump” often afflicts cattle grazed on fescue. One way to prevent it is to shift grazing cattle to warm-season grasses in summer.

Overgrazing or mowing too close to the ground can reduce yields of native warm-season grasses. Grazing and haying these grasses late in the growing season prevents them from storing good energy reserves in their roots for the following growing season.

For more information, contact your local MU Extension center or go to NRCS-GrasslandsProject.missouri.edu.