The annual Mr. AHS contest will be held Monday evening, April 16, at 7:30 in the high school gym.  Contestants for the title this year are James Thompson, John Ruff, Joey Darlington, Brad Baxter, and Matt Herrell.

The Seven Day Adventist Church of Ava and the family of Ross Williams hosted a birthday fellowship dinner for Ross Williams, of Mansfield, on Saturday, April 9, at the church north of Ava.  Williams observed his 100th birthday on Wednesday, April 13.

Freshman Donell Roberts set a new Ava High School track record in 100 meter hurdles this week, shattering the previous record set in 1986 by Tina Plake. Roberts ran the hurdles in 17.21 seconds, more than a full second quicker than the previous record of 18.40 seconds.

Golda Dooms and all of her family had a get-together at the Lions Club in Ava on Sunday. It was the first time all the Dooms kids had been together since their dad’s death.

CHAMPION – After the hard rain Sunday branches all around were overflowing.

GIRDNER –– Weekend guests in the home of Mr. and Mrs. Elvia Moore were Trisha, Daniel and James Bryant of Springfield. 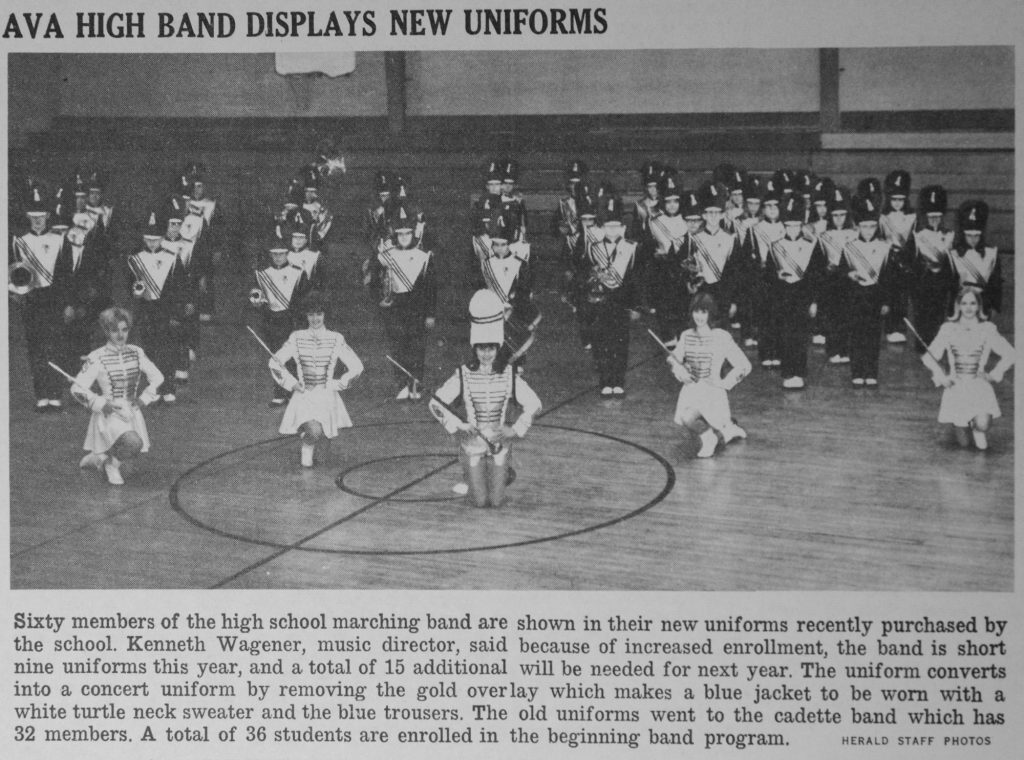 Voters in the Ava R-I School District elected two members to the board of education and approved a $3.52 tax levy in the annual school election here Tuesday.  Leading the list of candidates were Dean Davis with 415 votes and Clifford Robertson with 396 votes.

Mr. and Mrs. Ronald Goin of Ava have purchased Carmen’s Cafe from Mr. and Mrs. Charley Day. The business, located one-half block east of the square on Washington, has been named Shirley’s Sandwich Shop.  Employees will be Leta Snelson, Loretta Norman and Shirley Goin.

The First Baptist Church has purchased a school bus to be used to transport local residents to various church activities, it was announced by Rev. Howard English, pastor.

A.G. Spalding and Bros. Inc., a subsidiary of Questor Corporation and producer of Spalding sports equipment, announce its entry into the rapidly growing ski equipment marked today. Spalding is introducing a top quality line of metal skies, epoxy skis, leather-plastic ski boots, and ski poles, all to be marketed under the renowned Spalding label.

Six Avans were in attendance at the funeral services Wednesday for General Dwight Eisenhower in Abilene, Kansas.  Attending the service were Rep. Mervin R. Case, Arvel Davis, Mrs. Martin Kellogg, all of Ava, and Mrs. Fred Spurlock and two sons of Squires.

PFC Larry Vinson, son of Mr. and Mrs. Elga Vinson of Route 5, Ava, who is now stationed with the Army’s 3rd Division of the Old Guard at Fort Myers, Virginia, was on duty with his unit at the nation’s capitol Sunday afternoon, when the body of former president Dwight D. Eisenhower was moved from Washington National Cathedral to the rotunda of the capitol building.

Saturday, May 10, has been designated by personnel of the Waynesville, Fort Leonard Wood School system as C.W. Parker Day.  Mr. parker has been superintendent of schools for 44 years (Conway, 2 years; Ozark, 11 years; Ava, 17 years; and Waynesville, 14 years).

SMALLETT –– The children of Mr. and Mrs. Any Huffman, Mrs. Austin Osburn, Mrs. Mildred Walden, and Bud Huffman met in the home of their parents Wednesday to help their mother celebrate her 76th birthday with a dinner.

WASOLA –– Mr. and Mrs. Byron Boaz of Squires and daughter-in-law, Jill, were Monday afternoon visitors of Lilliam and Theta Clayton. 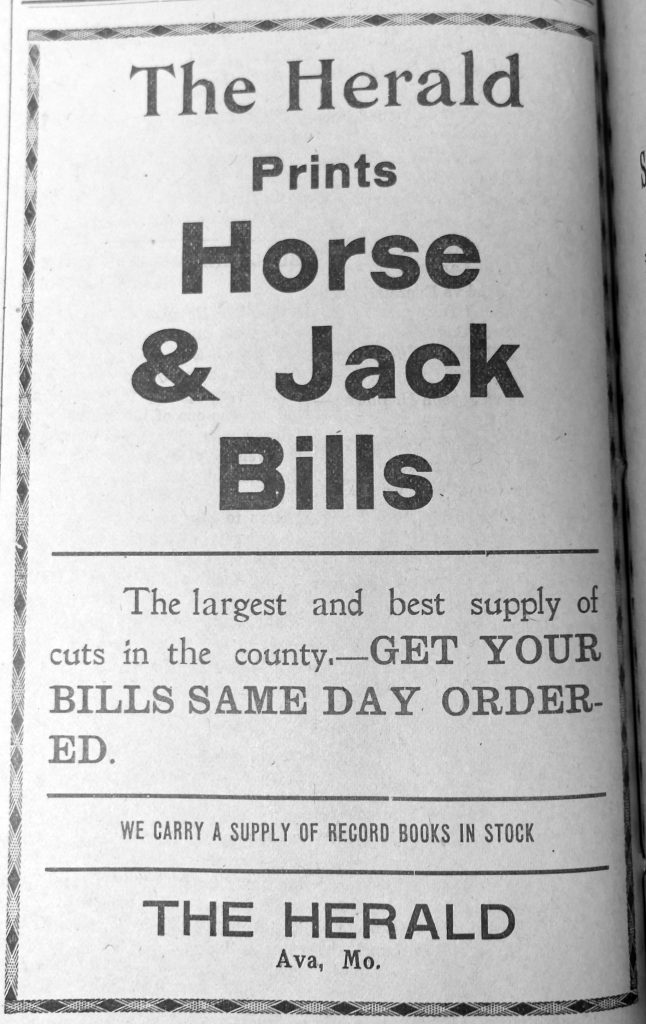 An outhouse containing some 200 baby chicks, an oil brooder and a number of small items of equipment were destroyed by fire Friday  morning at the home of William Spindler, east of Ava on the Hunter Road. Mr. Spindler had come to town to see a friend, Ensign Samual Wallace, off on the bus.  While he was in town a neighbor, Mrs. Claude Hibbard, called to tell him there was smoke coming from the small building.  Precautions were taken to save the house and garage, but the brooder house burned to the ground. The fire evidently started from the brooder stove.

Mr. and Mrs. Jess Ross who have been operating a cafe in Ava for the past seven years, sold their business on the southwest corner of the square late last week to Harve Haynes.  Mr. Haynes took possession of the cafe Saturday morning and will continue to run the business at the same location.  Soon after Mr. and Mrs. Ross had closed the cafe deal they purchased the Haskins grocery stock which is located in the Tabor building on the southeast corner of the square.

County Treasurer Arthur Singleton this week received $17,702.52 as the third and final payment of state money apportioned to schools.

“Did your garden do well last summer?”  “No, every time my husband started digging he found a lot of worms, so he would quit and go fishing.”

There are a lot of good farmers down in Douglas County who are doing their part for the war efort, and Harley Mears and his family is one of them.  The Mears are a family of four who live near Norwood, and there are besides Mr. and Mrs. Mears, Peggy Ann, 8, and Kenneth, 6.

ROCKBRIDGE –– Mr. and Mrs. Glen Pool and children left last Monday for Sanger, California, where they expect to work during the summer.

In a communication from Secretary of State John L. Sullivan, Sheriff Wm. Miller and Prosecuting Atty. J.S. Clark are requested to take action against owners of automobiles whose cars appear upon the public highways without the 1919 license tag. Only 70 1919 licenses have been issued to automobile owners in Douglas County, Sec. Sullivan state, as against a total of 118 in 1918.

Three thousand internal revenue agents working in special arranged zones throughout the United States will enforce prohibition after July 1, according to plans announced today by the revenue bureau.  Nearly 800 inspectors will be trained for the work to be added to the force of 2,283 revenue agents already available for police regulations and the machinery for enforcement will be in working order before the date when absolute prohibition becomes effective.

BOSTON –– Even with all of his players at work in the training camp, President Frasee of the world’s champions has a couple of wrinkles yet to iron out, when arrives at Tampa this week.  Carl Mays had not at this writing signed a contract, nor had Everett Scott, although the latter was reported to have agreed to terms before the squad started for Florida.

Claude G. Piersol, confessed kidnapper of baby Lloyd Keet in Springfield more than 10 months ago, was removed from the Webster County jail at Marshfield during the latter part of last week to begin a term of 35 years in the Missouri penitentiary at Jefferson City.

The business interests of the country are worried about the spread of the dangerous ideas called Bolshevism.

C.C. Meyers, Wm. King and Shae Anderson were elected as school directors of Granada. A team like that all pulling together should make things move.

MISSOURI –– Mumps are raging along the Osage.

Missouri is broken out all over with burglars.

There is a lady in Liberty who has a flask of grape brandy which she claims is 101 years old.

The recent graduates of the Northwestern Medical College at St. Joseph, Mo., have been refused recognition by the state board of health until they shall pass examination.

A number of farmers living near Pilot Grove, Mo., have been arrested for burglary.

A number of Odd Fellows of this place in connection with Seymour Lodge organized a Lodge of that society at Arno last Friday night, and conferred degrees on five candidates.

F.E. Adams has purchased a newspaper outfit from a party in Barry County and moved the plant to Mansfield, where he is now running a job office and if he meets with proper encouragement will probably establish a newspaper.

J.J. Kyle, who left Ozark County sometime since to take a position in the schools of Tennessee, has returned to the Kingdom of Ozark and will henceforth abide in the region of big red apples.

The disciples of Izaak Walton that left Ava about ten days since for White River returned Tuesday, after a very enjoyable trip.  Only one accident reported.  John Walton and the editor were capsized in the current of the billowy stream.  The former managed to reach the shore, but the latter, like Peter of old, exclaimed, “Lord save or I perish,” and just then lodged in the fork of a providential willow, where he perched for a short time till the life line was thrown out and he was once more restored to terra firma.

Some men think that to be gentlemen they should pay compliments, but not debts.

Every man has his opinions, but in many instances, he picked them up when somebody else dropped them.

In a recent address delivered before the Royal institution in London, says the New York Evening Post, W.M. Conway said that the conditions of mountaineering in the Himalayas differed so wildly from all others, that new methods were needed to cope with them.  The glaciers when reached were very long, so that progress up them was exceptionally slow.