James Taber was an apparent winner over veteran East Ward Alderman Joe Murphy in Tuesday’s municipal election in the City of Ava.  In the unofficial tally, Taber holds a one-vote margin over incumbent Murphy, 111 to 110.

The retaining wall is completed and forms were being set for the walls of the elevator at the Douglas County Courthouse last week.  The elevator will be installed outside the courthouse, but will have inside access to the building on all three floors.

Despite the forecasts of rain, thunder and lightning, some 600-700 people braved the impending elements to attend the Ava Women’s Chamber of Commerce 2nd annual Easter Fun Day last Saturday.  Some 29 teams made up by adults and teenagers provided entertainment and laughs for all in the raw egg toss with the “yolk” on almost everyone except cash prize winners Clyde and Brandon Darlington.  Bud and LaVerne Norman were the judges in the Easter bonnet contest.

Mary Elizabeth (Lizzie) Johnson will be 100 years old on her next birthday. 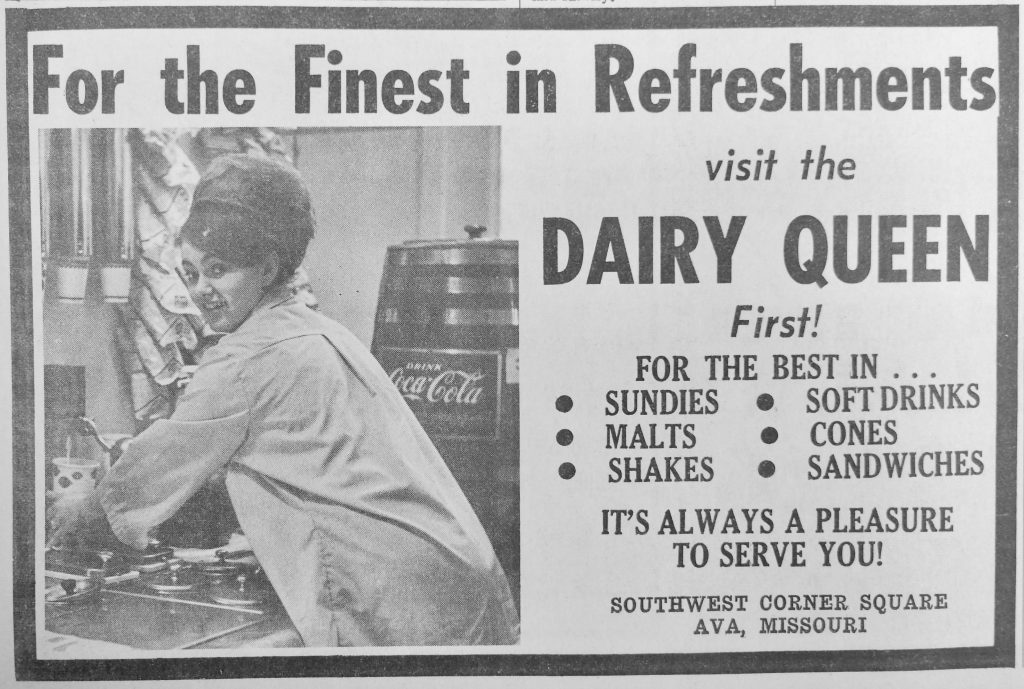 A preliminary hearing for Mrs. Juanda Jean Barnes, 37, scheduled yesterday was postponed until Wednesday, April 9, according to Magistrate Gladys Stewart.  Mrs. Barnes, charged with second degree murder in connection with a shooting at the family home last Thursday in which her husband was fatally shot, was released Friday after posting $15,000 bond.  She was represented by Attorney Marion J. Huffman of Hartville at the arraignment.

Funeral services for Lance Corporal Henry R. Longston, USMC, son of Ralph Longston of Ava, who was killed in action in Vietnam on Saturday, March 15, will be held at 1 p.m. Friday at the Thieme Funeral Chapel in Springfield.  Burial will be made in National Cemetery, Springfield.

Mr. and Mrs. E.C. Maloney of Ava will celebrate their 60th wedding anniversary Sunday afternoon, March 30, with an open house at their home on Southeast 5th Street.  Mr. and Mrs. Maloney were married in Ava March 26, 1909 with the late Rev. G.R. Curry officiating.

Mr. and Mrs. Harold Reed, of Ava announce the marriage of their daughter, Karen, to Joe Lee Hawkins, son of Mr. and Mrs. R.J. Hawkins of Nottinghill on Feb. 1.

Mr. and Mrs. Claud Brown of Route 4, Ava recently celebrated their 50th wedding anniversary. The couple were married March 16, 1919, in the of Mrs. Brown’s parents, the late Mr. and Mrs. Joe Sell of Ava.

Mr. and Mrs. Johnnie Sawyer of Route 3, Ava, announce the birth of a daughter at 4:30 a.m. March 11 at Houston Memorial Hospital. The has been named Johnna Beth.  The Sawyers also have a son, Rex, age 10. 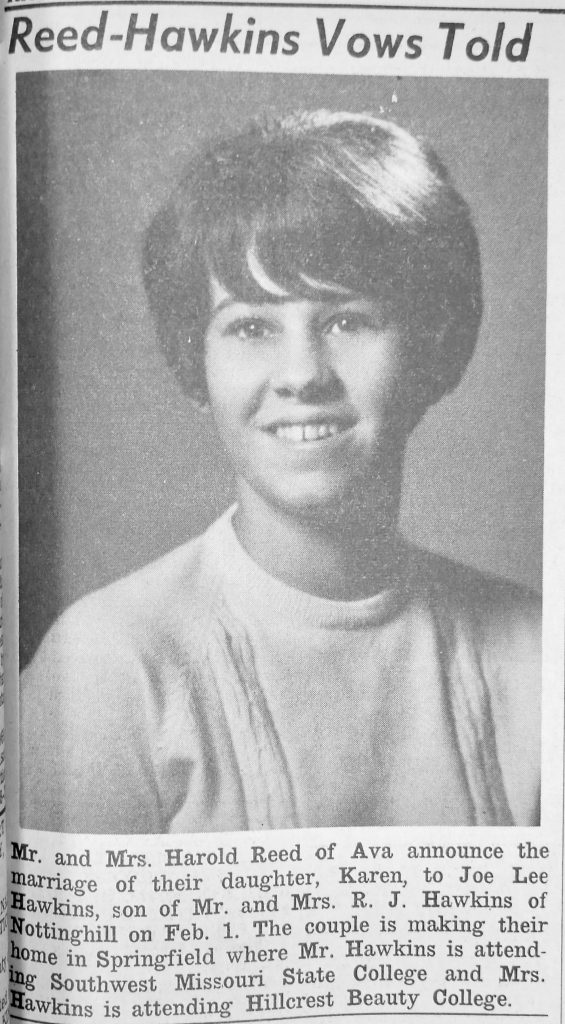 Mr. and Mrs. Elmer Kilburn entertained with a birthday supper in their home, Route 1, Ava, Friday evening, March 21, when they honored their sons, Ron and Don Kilburn, who were celebrating their 18th birthdays.

The creeks were up Monday morning after over three inches of rain.

Dr. Douglas Hays, Ava chiropractor, was guest lecturer at the Palmer College of Chiropractic in Davenport, Iowa, over the weekend.   Dr. Hays was accompanied to Davenport by his wife, Pat, and their two sons, Matthew and Troy, who visited with Mrs. Hays’ mother, Mrs. C.A. Haney.

The Ava Chamber of Commerce Second Annual Spring Style Show was held Saturday night.  The spring style show is termed a success.  Sherry Plaster, Miss Glade Top Trail 1969, did a Charleston dance, which was her talent number in the Miss Glade Top Trail contest last October, another Chamber of Commerce event organized by the ladies committee.  Theme for this year’s style show was, “Out of this World.”

Russell Ferguson and Leo Lisby were reelected to the city council in Ava’s election Tuesday, and Clarence Clinkingbeard and Floyd Simmons were returned to the board of education in the school election the same day. Voting was light in both elections.

Lieutenant Willard Pueppke of Ava piloted his B-24 bomber home to its base in the Solomon Islands from its first daylight raid on Truk with at least five and probably two more Japanese Zero planes to its credit, it was reported in an April 2 dispatch by Associated Press from headquarters of the Thirteenth Army Air force in the south Pacific.

New Ideas of Government Find Slow Going in Ozarks –– By Barrow Lyons –– In spite of the fact that citizens of Ava express great satisfaction with their town, they will tell you that the New Deal has made sad inroads upon their way of life.  WPA, PWA, AAA, CCC, and other alphabetic agencies have gone a long way toward making the poorer people of the county too lazy to work, they declare, and the “intolerable” interference of the OPA with farmers and shopkeepers almost incites rebellion.

The Ava High School basketball team played a return preview game Wednesday last week at Mansfield and was defeated by a score of 28 to 18. The same teams met on the Ava court two weeks before and Ava won the game by one point. Both teams were showing their teams for next year’s season.

JEFFERSON CITY –– The Conservation Commission suggests that if you are tired of eating chicken, try crow, and incidentally help the farmer because the crow population needs reducing lest it become a nuisance to agriculture.  Dress crow as you would a fowl. Roll in flour and saute as you would a chicken.  After meat is brown, add water and simmer slowly until meat is tender. Add water from time to time as necessary.

MT. TABOR –– Farmers have been taking advantage of the sunshine to get their potatoes planted and early farm work done.

Mr. and Mrs. Denzil Barnes and two children were weekend guests of his parents, Mr. and Mrs. L. B. Barnes.

Thirteen tires, being dried out in the process of recapping, were destroyed by fire Saturday afternoon in a drying shed of the Douglas County Motor Company. The shed, located just behind the motor company’s office and to the side of the shop, evidently caught from a kerosene heater used in the drying process.  After the fire was out, ire Chief O.M. Swick pointed to one of the smoldering tires that had been pulled out of the drying rack onto the ground and said woefully, “That tire is one of mine.”

The County Highway Commission has arranged to start work on the Ava-Mansfield road beginning at Mt. Zion and going toward Mansfield, this week.  An engine was secured from Rippee Brothers of Ozark County and John Vinson of Ava will operate the grinder.

The elegant country home of Carl Mays, the famous Boston Red Sox pitcher, at Bryant, Douglas County, was totally destroyed by fire on Wednesday of last eek. The property was only partially covered by insurance.  Mr. Mays is in Florida at the Red Sox training camp and his wife is visiting with relatives in Pennsylvania.  Frank Mays was living in the house but was absent on a short visit to relatives when the fire occurred.  The loss will amount to several thousand dollars.

G.A. McFarlin has bought the Mercer & Son stock of goods. The Mercers contemplate moving to Missoula, Montana, as soon as they can close up business affairs here.

John Malloy, president of Citizens Bank, and V.A. Dobyns, cashier of Peoples Bank, were elected members of the Board of Education of the Ava public schools, at Tuesdays school election.

Records, files, etc. of the Douglas County Local Draft Board were shipped from Ava last Monday for Washington, D.C. where they will be stored by the War Department.

Figures made public by the War Department today show that from the signing of the armistice to March 26, 1,535,471 of the 3,670,888 officers and men under arms when the war ended had been discharged from the service.

The total number of births in Douglas County during 1918 exceeds the number of deaths by 149 according to the reports of local registrars. There were a total of 244 births and 94 deaths.

John Harnden, prosperous farmer of three miles west of Ava, is having his residence remodeled this week and will convert the old building into a modern bungalow. Ira Yeisley of Ava has the work in charge.

R.A. Clinkingbeard has bought the L.O. Hailey property just west of the city.

Work was started this week on a concrete store room being erected by the East Ava Canning Company near the depot.

GRANADA –– April Fool’s Day and school election are on the same day this time. 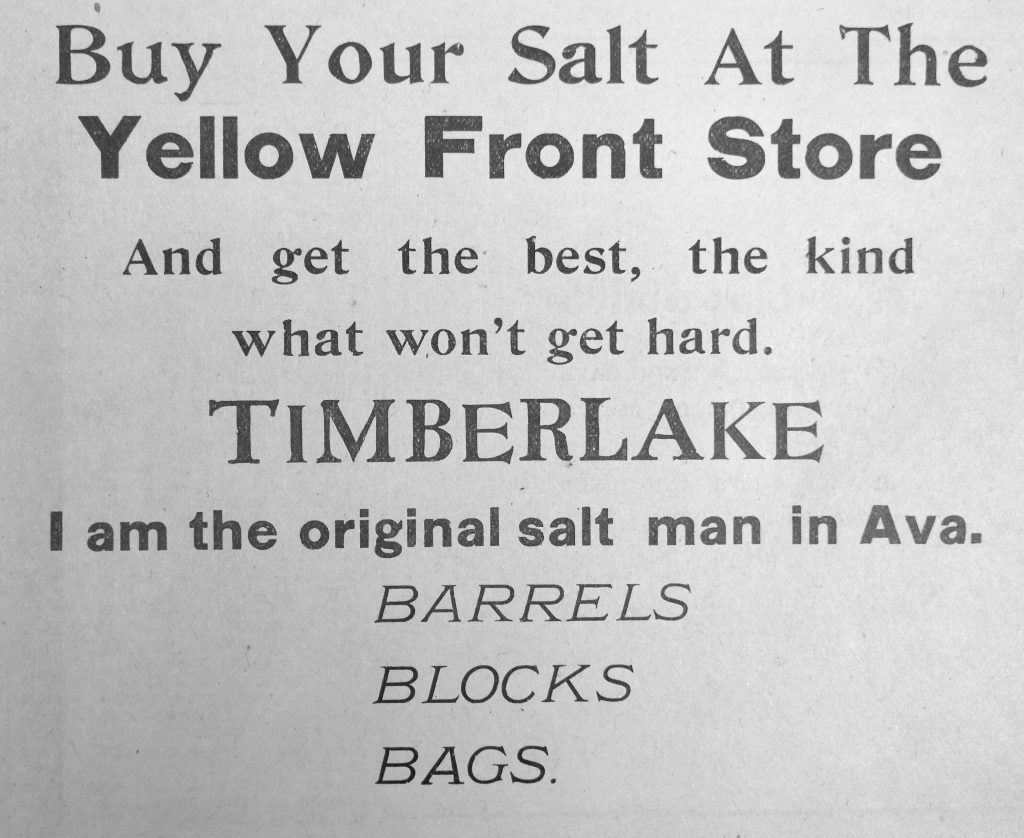 CHICAGO –– In a lecture delivered last night Theodore Westmark, young Scandinavian, accuses Henry M. Stanley of having lunched on human flesh to satisfy a morbid curiosity.  He said that in 1854, Stanley, curious to know how human flesh would taste, sent his servant, Duala, of the Congo state, to procure a chunk of the native material.  It was fried in butter and served with sauce piquante and mixed pickles, but despite these condiments Stanley pronounced the flesh to be tasteless.

There is talk of bridging the Osage at Linn Creek.

Webster County is the location of a bottomless lake and of the highest point of ground in Missouri.

Hatchets, corn knives and monkey wrenches were the implements used in a recent fight in Pike County.

A jury has found that a kiss is assault and battery of an aggravating character and properly punished by a fine of $10.

The Farm  Record has moved its quarters from the Muller building to the house south of the Hailey Hotel.

James Crisp, charged with murdering his uncle five years ago, near Hartville, was convicted of murder in the first degree, at Marshfield, Monday.

Photographer Glass has remodeled and refitted the building on the southwest corner of the square and is now fixed as snug as a bug in a rug. Prof. Glass is an adept at his business, and parties desiring work in that would do well to give him a call.

Steps are being taken for replacing the Gainesville school house which was destroyed by fire a short time since.  Gainesville has been unfortunate with respect to her school house, and their determination to try again speaks loudly for their pride and courage in school affairs.

The Mansfield High School, a thorough teachers training school, will open a winter term January 9, 1895.  The Managers have secured the services of C.L. Bennett, BS, late of the language department of the Bryant & Stratton College, St. Louis, who is a thorough and experienced teacher. For particulars, concerning board and tuition, address C.L. Bennett, principal, or Jesse Roote, secretary, Mansfield, Mo.

Fifteen men were killed and half as many more wounded by an explosion of powder in the fireworks factory of Romaine Bros. in Petersburg, Virginia, Saturday afternoon.