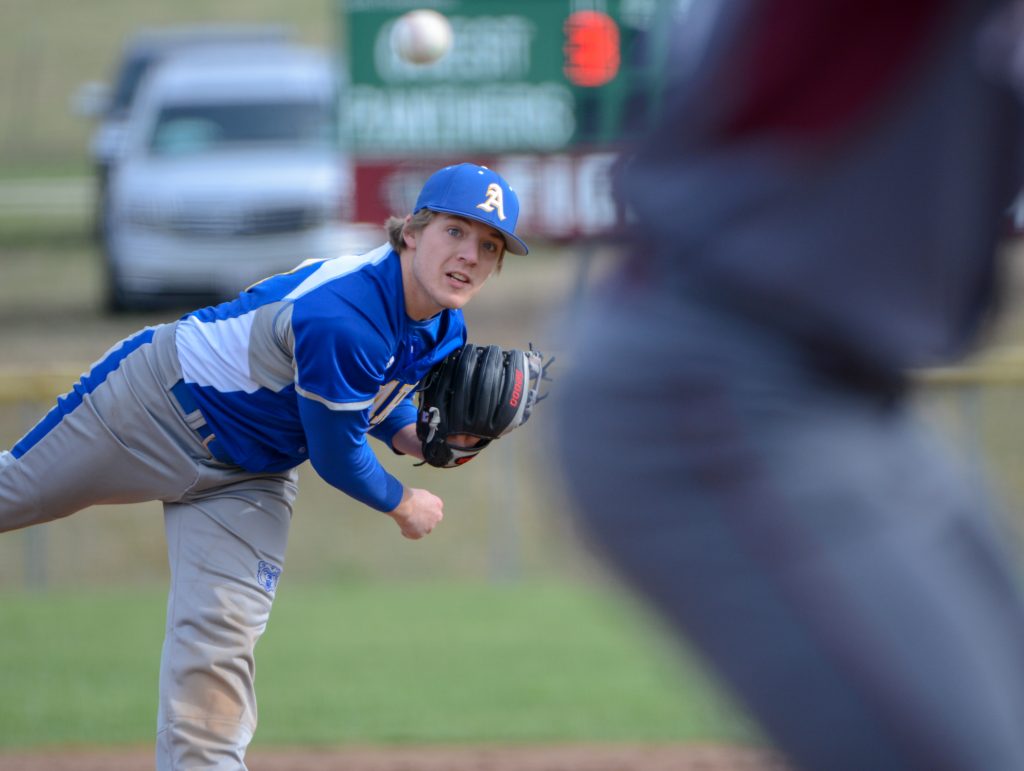 MOUNTAIN GROVE – The Bears were holding their own but needed some insurance toward the end of seven innings in a game where Ava had a four-run lead chipped away to just one by the Panthers headed into the sixth inning.

The Bears came out with bats talking as a 1-2-3 in the batting order ended up scoring the first three runs at the top of the first, setting a stout tone for the remainder of the game.

Panther pitcher Brandan Rogers gave up the first hit of the game to lead-off batter Tom Emerch before hitting Spencer Skyles and Caleb Johnson with pitches to juice the bases with no outs.

Deep in it, Rogers gave up a hit to Kaden Myers who’s single brought in two runners right off the bat. Zack Miller went 0 for 1 in his first plate appearance delivering the strikeout and some confidence to the Panthers after the tough start.

Carter Campbell flied out to left field in his appearance but provided the opportunity with the deep hit to allow Johnson to return to the dugout, for a 3-0 lead.

Mountain Grove’s lead-off batter was able to garner the hit off of Ava pitcher, Caleb Johnson. Gavin Vaughn was able to make his way around the diamond thanks to a sacrificial bunt by number two Dawson Hiler and a grounder by John Felker, who was put out on the 4-3 play to first baseman Zach Mendel.

With two outs on, it appeared the Bears were about to close the inning and strand the first Mountain Grove run just 90-feet from home.

Panthers’ Brandan Rogers was up as fourth in the order and smacked a drive to deep left field for an RBI single making it a 3-1 ball game. The Panthers ended up with juiced bases, but a battle ending in a swinging-strikeout by Nicolas Archer stranded three and kept the Bears ahead, but with eyes wide-open.

At the top of the second, a nine through three order started with a swinging strikeout for Bryse Dodson followed by a line-roller double along the third base stripe for Emerich. He would have been the redeeming run but back-to-back 6-3 plays shot the Bears down before they could strike.

Zack Miller made a hit in the third and circled the diamond for the Bears’ fourth run when Andrew Dalton made a hit and pulled the extra base thanks to the Panthers’ left fielder who dropped the foul ball.

After a 1, 2, 3 top of the fourth for the Bears, the Panthers’ started off with number seven in their order, Nicholas Archer. At 0 for 1 with his first appearance in the first, he hit a gounder to right field and beat the ball to the bag in front of the visitors’ dugout.

The Bears made up for the hit with a 1-6-3 double play on an infield ground ball from the bat of Cason Lee. Johnson fielded the ball to the left of the mound, tossed to Emerich at second who passed it on to Mendel at first to put out two and boost the Bears’ confidence after getting shut out in the top of the fourth.

Cue Alex Casas who wore the pitch from Johnson before pulling two steals on the Bear defense and making third on an error by Bryse Dodson, who closed the glove a second too-soon and missed the opportunity for out number three at third.

It bit the Bears in the rear end when the Panthers went to the top of their order with Gaven Vaughn who was 1 of 2 in his first two appearances.

He reaches and Hiler reaches afterward, picking up an RBI single on bringing Casas in to make the game 4-2 for the Bears.

The Panthers defense kept the Bears off the bases in a 4, 5, 6 fifth inning, Carter Campbell getting the third out on a 5-3 play on a full count.

Bring back Brendan Rogers, who was 2 for 2 in his at bats in the first and third innings. A drive between Ava out fielders Andrew Dalton and Spencer Skyles landed him safely at first after just two pitches from Johnson on the mound. Number seven on the roster returned to the plate, reaching first with an RBI single to tighten the game up to a single run lead for Ava.

With just one run and no insurance for the Bears bats needed to talk and wheels needed to spin in the sixth to open the lead and keep the Bears on top.

That didn’t happen despite Zach Mendel reaching and making third on a steal. He ended up being the lone duck on the pond after Emerich flied out to center field.

Bottom of the sixth and the Panthers were foaming at the mouth, so to speak, for a tying run. Casas reached first on balls, a big indicator that Johnson was getting tired and that coach Rex Sawyer needed to make a change on the mound.

In the middle of Panther lead-off batter Gaven Vaugn’s fourth appearance (reaching twice, so far) Bryse Dodson took the mound to try and close things up for the Bears before Mountain Grove could catch up.

Vaughn got a piece of the ball, but a solid catch by Ava center fielder, Spencer Skyles, put him away for out number one. Still working on his footing on an unfamiliar mound, Dodson walked Hiler on the 3-1 count putting the potentially-tying run on the pond.

Before any other runners could make it out on the field, Casas was caught stealing second on a great 2-4 play for out number two. John Felker reached first and put Hiler in scoring position at second.

Rogers flied out to first base, putting away the Panthers and saving Ava from needing a rally in the seventh.

Top of the seventh, Skyles reaches, Johnson flies out to second and Myers reaches first to push Skyles into scoring position.

Zack Miller gets a big piece of the ball, driving it just short of the fence and into centerfielder Rhett Wakefield’s glove for out number two.

Pins and needles. Carter Campbell became the unexpected hero after a fumbled catch at first kept him from becoming out number three.

The error by Panther first baseman Cason Lee cost Mountain Grove two insurance runs in the final inning as Ava opened the gap, 6-3. With all the commotion at first, in came Skyles and Myers.

Lady Luck had made an unexpected appearance for the Bears by producing the error at first and giving coach Sawyer and his team the insurance runs they needed going into the bottom of the seventh with Mountain Grove on deck.

With wind taken from their hoped-rally, the Panther dugout put their rally caps back on as Dodson made the game save with a 5, 6, 7 seventh with a 5-3 play for out one, a looker in batter Ethan Emery for number two and a big whiff by Panther batter Nicholas Archer for the game and an SCA win for the Bears.

Tom Emerich went on two of his four appearances, scoring one run and reaching in the second. Spencer Skyles turned-in two laps, scoring on each of his two successful appearances. Runs by Caleb Johnson, Kaden Meyers, and Zack Miller made up the other three runs on the board.

Johnson made one wild pitch and made a batter wear another, Marler let one by while working behind the plate while Dalton and Dodson each picked up one error a piece.

At the end of it all, the Bears made nine hits in 35 plate appearances with RBI’s credited to Campbell and Myers.

Pitching, Johnson threw just over 80 pitches in five and one-third innings with three strikeouts, picking up the win as reliever Bryse Dodson finished with to K’s which closed the books on Monday putting the Bears at a healthy 5-1 record this season. 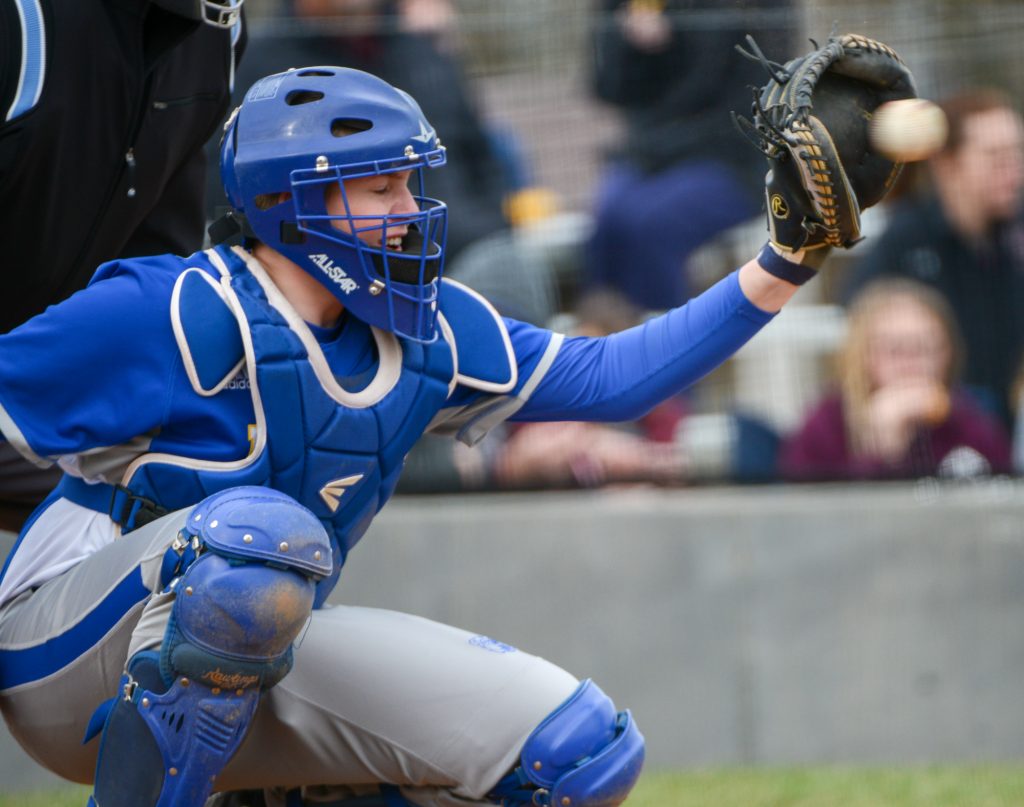