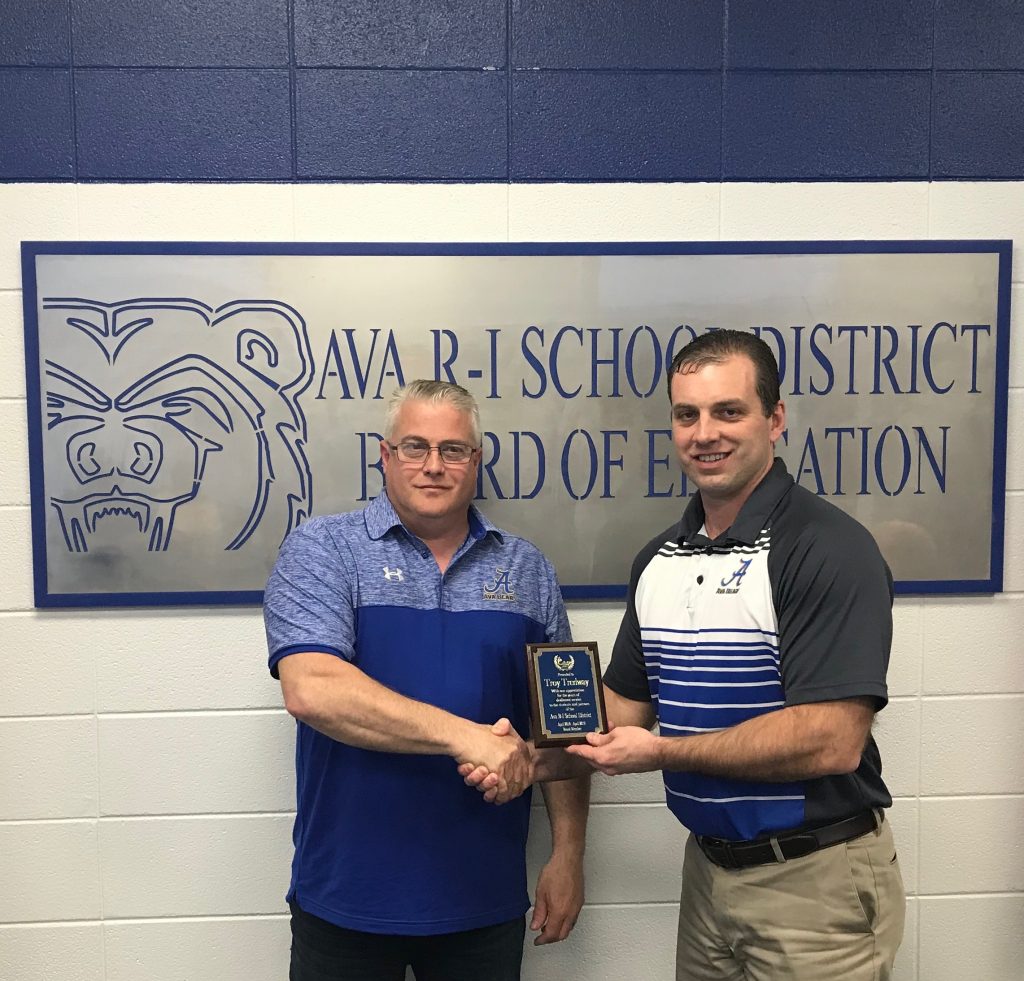 Troy Tredway, left, was recognized for his service on the school board last Thursday.  As outgoing board members, Tredway and Lowell Strong have served three year terms on the board.  Strong, who was unavailable, was watching his granddaughter compete in her first track meet.   Bart Ellison, right, made the presentation.

Tredway and Strong recognized for service to the district.

The board adopted recommendations to hire Jennifer Pitts as a second grade teacher, filling the slot vacated by Penny Loftin who is retiring at the conclusion of this school year.

Board members approved hiring all other teaching staff personnel for the next school year.

During open session, the board approved a six-week summer schedule that marks May 20 – 31 as kindergarten through six-grade students, with middle school and high school course completion and credit recovery venues available, if needed.  From June 3 – 28, kindergarten through 12th-grade will be in session.  Both summer sessions will run from 8:00 a.m. until 2:30 p.m., with breakfast and lunch provided free to all students.

Dial said summer school busing needs will depend on the number of students attending this year.  However, he expected attendance to be similar to last year.

Outgoing school board members Troy Tredway and Lowell Strong were recognized for their service to Ava R-I Schools. Tredway and Strong have each served three years on the board, and since neither one elected to file for an additional term, this was their last meeting as a member of the board.  Both were awarded a special plaque commemorating their commitment and service to students and community.  Tredway accepted his award during the session, Strong, however, was absent and will receive his at a later date.  Strong was watching his granddaughter’s first track meet.

Julie Taylor, Ava High School’s National Honor Society (NHS) sponsor, was also recognized by school board members.  Taylor was instrumental in overseeing the local NHS group as they planned and facilitated the National Honor Society State Convention held at Lake of the Ozarks March 5-6.  Over 340 members and student advisers representing 25 schools from across Missouri attended the conference. The conference theme for this year was “Lead with Honor.”   The board presented Taylor with a certificate of appreciation.

With unanimous votes, the special education review and health services program review were approved as presented.

The OPAA Food Management, Inc. contract was also renewed by the board in a 4-1 vote.  This upcoming school term is the fourth year of a five year contract commitment with the company.  According to Superintendent Dr. Jason Dial, the renewal fee remained constant, there was no price increase.

In the vote, Troy Tredway was against the contract renewal, with Kenny Fleetwood, Bart Ellison, Mike Stewart, and Deanna Parsick voting in favor.

The school board approved a request from Sandra Harvill who asked to sell the rights to contract student transportation Route No. 1 to Lance Stilling, of Ava, Mo.   The vote was 5-0 in favor.

An adjustment was made to the present school calendar allowing for the addition of one day at the end of the school term, making the last day of school May 15.  According to Assistant Superintendent Aaron Dalton, this change accommodates a make-up day and allows staff members to attend the Monday, April 8, professional development day as previously scheduled.

Monty Valentine, maintenance director, reported strong winds damaged the roofs of several campus structures during recent storms.  He said the insurance company was sending an adjuster to review the damages.

Dr. Dial surmised the Transpar audit will likely be available for review late April or early May.  He noted Transpar representatives have been researching information as they have made contact with the administration, and Larry Vinson, president of the bus association.

Dial reported state bus inspections were conducted recently and findings are as follows: 26 contracted buses were inspected, with  a pass rate of 84.6% and none were placed out of service.  The pass rate for contracted buses was up 20%.  In the district, the pass rate was 87.5%, and one bus had a broken spring which was easily fixed.

Dial advised the school has plans to host another bus driver workshop in July to help educate the owners about state inspections and what inspectors look for.  The workshop will also demonstrate how to address those issues.

The Ava R-I School Board will reorganize with two newly elected board members following the Tuesday, April 2 municipal election.  The re-organizational meeting will be held Tuesday, April 16, at 6:15 p.m. in the board of education room.  The April board meeting will follow at 6:30 p.m.  Meetings are open to the public.